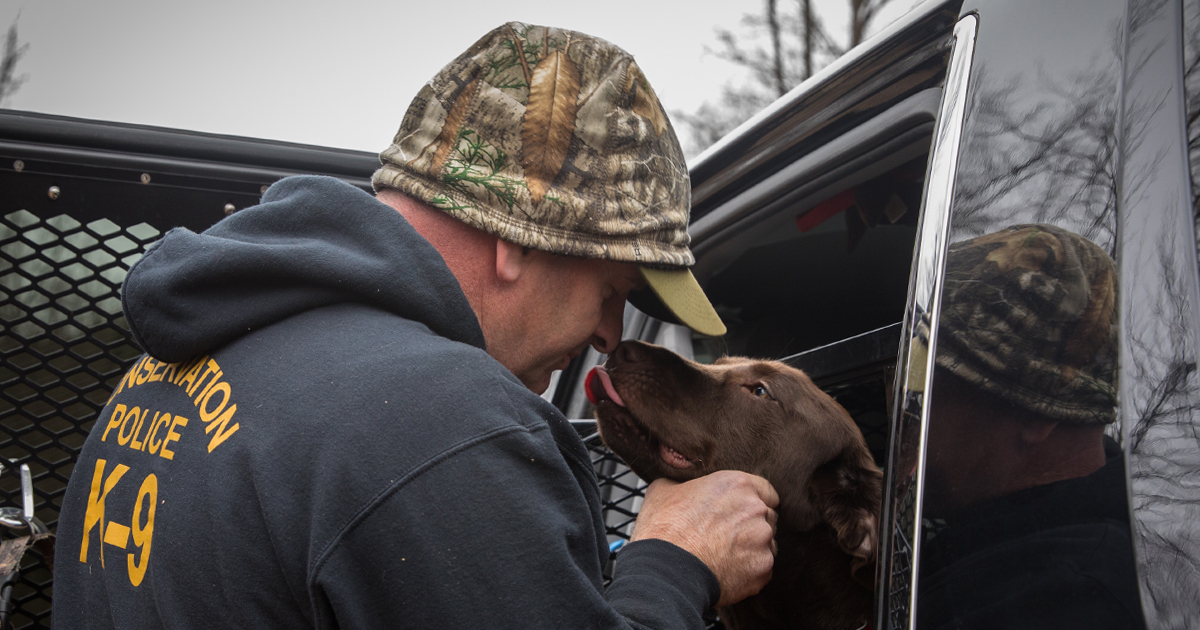 Senior CPO Wes Billings shares a moment with K9 Molly as he gets her out of his truck.

Imagine running as fast as you can behind a dog hot on a scent trail through the woods. You’re watching the dog intently, looking for signs they’re still solid on the scent trail. You have to maintain just the right amount of pressure on the lead. You’re also making sure not to let the lead get tangled in brush or trees. You’re trying to stay on your feet and not trip over branches. You’re alert to your surroundings, on the lookout for potential danger. And, you’re in the dark.

Weeks 2 and 3 of the DGIF K9 Conservation Law Enforcement Training were all about cementing the bonds between the five dogs and their handlers working toward becoming K9 CPOs for the Virginia Department of Game and Inland Fisheries (DGIF). The five trainee pairs are aiming to join the four currently serving K9 CPO pairs; the DGIF K9 program is supported by the Ward Burton Wildlife Foundation (WBWF). You can help by donating to the Caring for the CPO K9s Fund through WBWF. Your donation will go to veterinary care, maintenance costs, and training for the K9 CPOs

After the dogs and handlers conquered the shorter, simple tracks set in the first week, the challenges grew. They tackled tracks over varied terrain—through grassy fields, into dense woods, near water. They also honed their tracking skills with longer, more complicated tracks full of turns. Night-tracking was introduced. “She’s learning me, and I’m learning her,” said Conservation Police Officer Ian Ostlund of Reese, his chocolate Lab K9 partner in the training. “That’s what these weeks of training are for—so we can establish that strong connection so we can understand and read each other.”

“Trust your dog,” was repeated over and over during the weeks of training by Senior CPO Richard Howald, a veteran DGIF K9 officer who is leading the training sessions. “The second night track we did, all of a sudden, Richard wasn’t behind me,” said CPO Bonnie Braziel, who is training with the black Lab Grace.

“I started thinking, ‘Oh no, did we miss a turn?’ But Grace was still great in her profile, and I knew she was on the track of something. I was almost 30 seconds away from stopping her, thinking we were off the track, when all of a sudden, her head snapped around. She made a 90-degree turn, went right into the woods, and there was our ‘bad’ guy. Trust in your dog!” Braziel said.

The five dog-and-handler pairs will continue to work on their skills through the end of April; the dogs meeting the standard will graduate as K9 CPOs on May 8. Everyone signed up for the K9 CPO newsletter is entered for a random drawing for 25 lucky people to attend a special DGIF K9 CPO training session and meet-and-greet with the dogs! 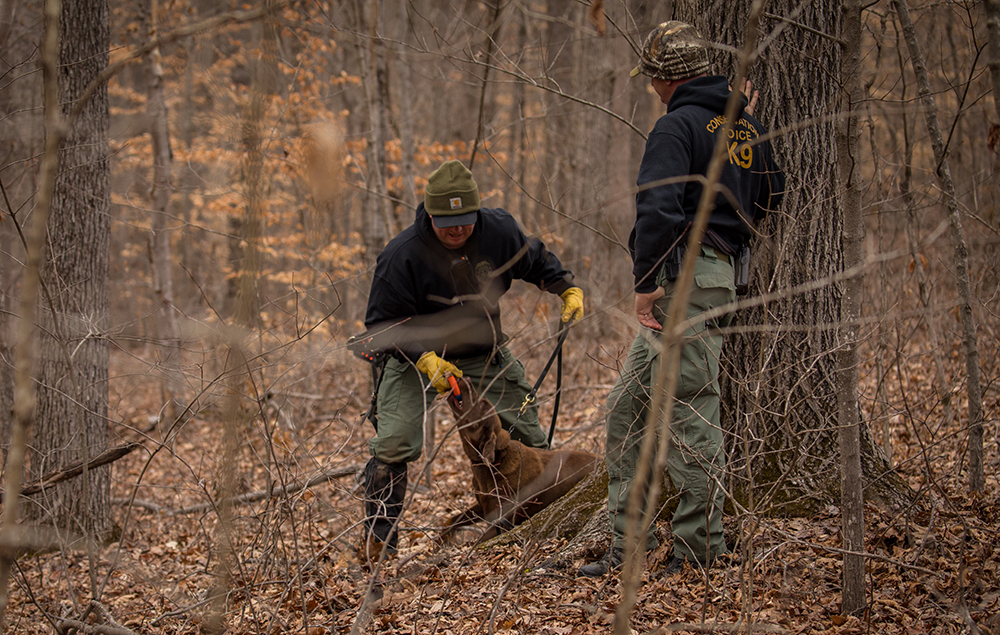 Ostlund has been thrilled with how his partnership with Reese has developed. “The last half-dozen tracks we’ve run, I feel like we’ve really established a strong connection when we’re working a track line,” he said. “[Senior CPO and veteran K9 handler Wes Billings, who is also training a new dog] described it to me like a ballet dance; we have to work in concert. I’ve really taken that to heart.”

Reese’s extreme drive led to some issues with lead tension, as she’d get frustrated and circle with too much pressure on the lead. It was also difficult for Ostlund to tell if she was truly on the scent or just running. “I’ve had to develop a lot more finesse on the lead so that she didn’t try and convince me that she was on a track when she wasn’t,” he said. “The last six or so tracks we did, she threw me negatives, which is a signal that the dog gives the handler that she’s on the edge of the sign or has lost the track. She’s being much more pronounced when she gets out of the scent. She’s become much easier for me to read, so we’re a lot more efficient on the track line. I couldn’t be happier with how she’s doing.”

Ostlund has worked with K9 handlers in the past, but he’s been surprised at how intense the work is. “It’s a complete eye-opener for me,” he said. “It’s very physical and very mental. It’s psychologically draining as well, because we all want our dogs to do well. I don’t want my actions to ever have a negative impact on my canine partner. I’ve been interested in K9 handling for some time. I had no idea how involved it is. It’s fascinating. It’s a complete lifestyle change.” 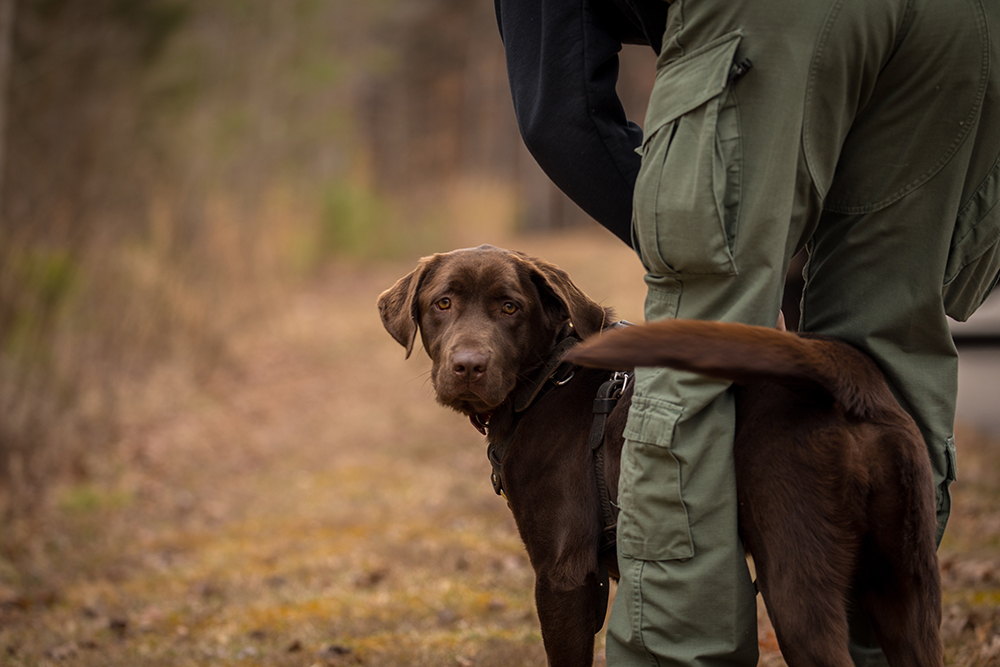 Billings has been working with current K9 officer Josie for eight years, so he knows the demands of K9 work well. For this training, he’s introducing a new canine partner to the role, the chocolate Lab Molly.

“I couldn’t ask for anything better at this point,” Billings said of Molly’s progress. “I’m probably harder on her because I demand a higher level of performance than the new handlers. I have to be careful with that because she’s new to it. It’s kind of cool to go through the training the second time to see what you missed the first time.”

One thing Billings is concentrating on is keeping Molly to a consistent pace. “She wants to run a little fast, and I’ve learned from my mistakes over eight years with a dog,” said Billings. “I’ve learned how important it is not to run too fast on a track, because if it’s a high-risk track, and you’re tracking someone who’s possibly armed and dangerous, then you have to have someone with you to help you. If you’re sprinting behind your dog and you get to end of the track and the bad guy is there and you’re about to throw up because you ran so hard and none of your help was able to keep up, that’s a problem. We’re trying to slow our new dogs down so they can see it easier when a dog makes a mistake, and also for that safety purpose.” 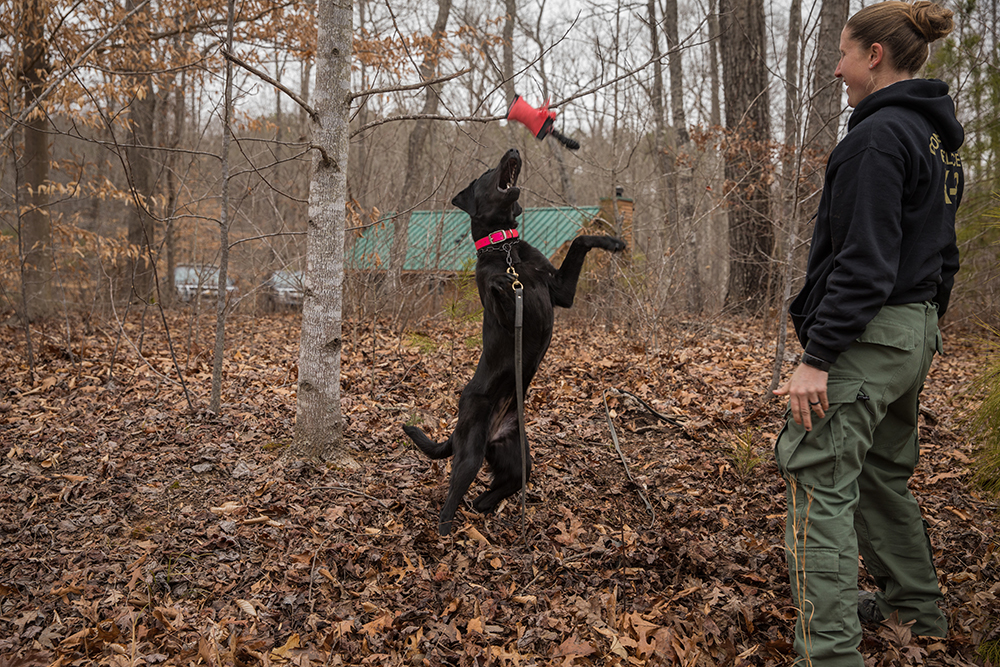 K9 Grace gets to play after a successful tracking exercise with CPO Bonnie Braziel.

Slowing down is something that the black Lab Grace and Braziel will be working on. Grace and Braziel set land-speed records on the half-mile track that concluded Week 2 of training and on the mile-long track that finished Week 3. “She’s just born for this,” said Braziel. “It’s just crazy to me how she’s naturally able to do it. It’s been a lot of hard work, but so much fun. It’s a lot of running!”

The handlers videotape each tracking exercise, and at night they’d gather to review the footage and talk about how to improve. “We’ve created a really good team bond together,” said Braziel.

Braziel noted that tracking in the dark at night forced the handlers to really focus on their dogs. “The dog can see, hear, and smell much better than us at nighttime,” she said. “As handlers, when we’re out there during the day, we’re looking for things like scuffs or a broken branch, a visual sign a person may have left. At night, we can’t see those as easily, so we have to trust our dog and rely on them to guide us through everything. I was able to see Grace throw a negative and get off the track because I was so focused on her. I slowed us down, stopped my feet, and trusted in the dog.”

Grace is excelling at tracking. “She’s hitting the corners where she needs to, and she’s throwing me the negatives, which is her telling me, ‘I can’t smell this guy here.’ And I have to help her work around to a different angle,” Braziel said. “Over the past three weeks, each one of us as handlers has really focused in on each dog as an individual. We’re learning our own dog, knowing their quirks, knowing where they might get distracted and how to work through it if they do.” 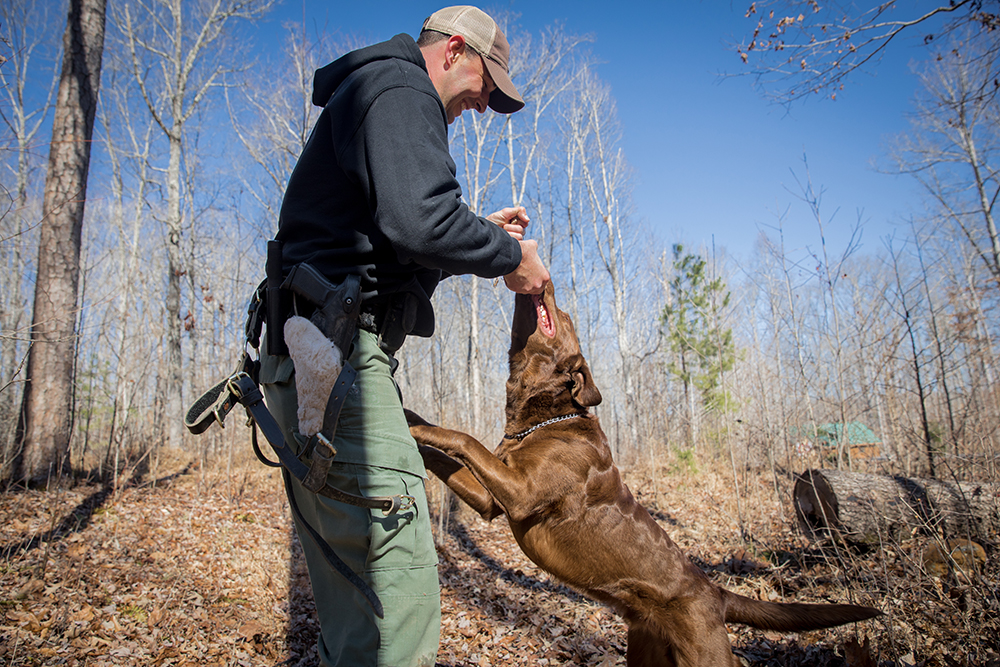 K9 Bruno gets some play time with CPO Tyler Blanks after completing a successful tracking exercise.

CPO Tyler Blanks has been developing his ability to read the body language of his K9 partner, the chocolate Lab Bruno. “Training in different terrain and constant changing weather affects a dog’s ability to work. I have learned to read Bruno and be patient while he does the work,” Blanks said.

“Bruno has a natural ability to hunt and wants to find things. In the last two weeks I have noticed his drive to hunt has increased significantly. He has quickly caught on to tracking and knows that work is fun. He now gets excited every time I put his tracking harness on him because he knows we are about to find someone and there will be big playtime at the end.”

Blanks and the other handlers have also learned about how wind conditions, varying terrains, the time the scent has laid, and more affect scenting conditions. They’re learned how to evaluate those factors and assist their dogs to stay on the track in them. 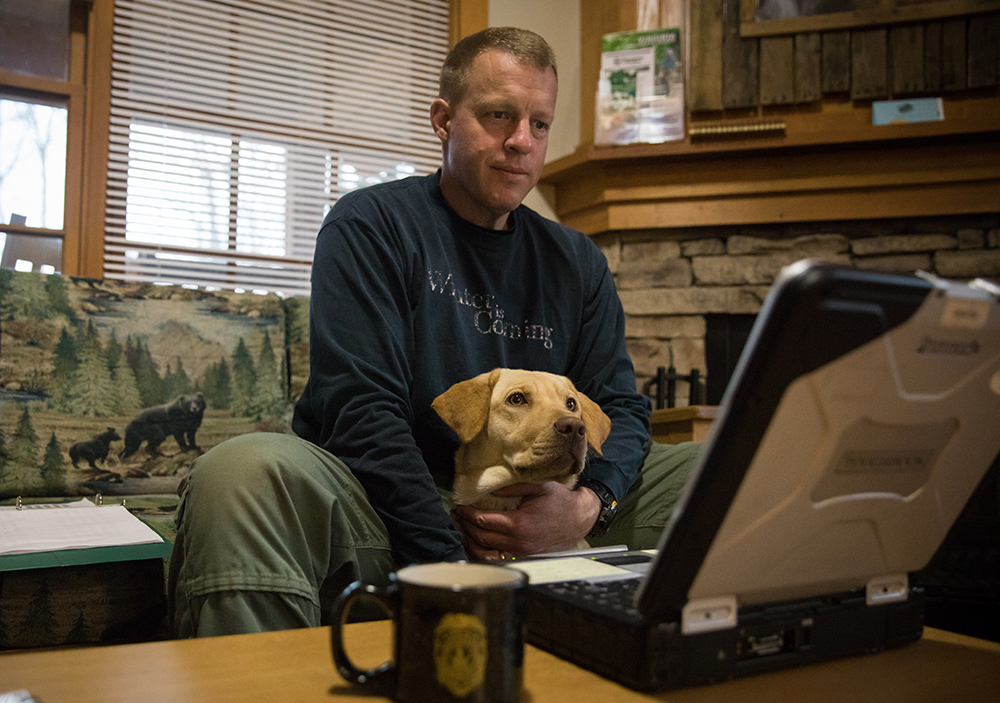 Master CPO Mark Diluigi and K9 Lily review some tracking footage at the end of the day.

Master CPO Mark Diluigi noted that Lily, the yellow Lab he handles, has really caught on to the job. “She loves going to work; she runs out to the truck ready to go,” he said. “All the dogs are really coming into themselves; you can see them think, ‘This is what I’m here to do, and I’m going to do it.’ Their drive is really picking up. When their noses are to the ground, they’re like machines.”

Diluigi has been fascinated by how quickly the dogs learn. The handlers have to increase the difficulty and complexity of the tracks constantly to keep the dogs engaged. “We work them in different climates and at night,” he said. “You’re also running tracks 10 minutes old, 30 minutes old, 3 hours old. There are also different terrains, short grass, tall grass, woods, rain, and mud. The scent can be on top of the water. It’s really interesting to watch how the dogs react to that and how they figure it out. They’re smart!”

The handlers and dogs all have two weeks off from formal training, but they’ll be working on their skills such as basic commands. The K9s use sitting as an alert that they’re found something, and the handlers have begun to train them in those alerts. “Once they’re done what they’re supposed to do, we use release words to let them know they can get their reward, their toy,” Diluigi said. “There are also bridging words that tell them they’ve done what they’re supposed to do, but we want them to continue to do something else. We’re supposed to work on those word recognitions. It’s really fun stuff.”

The K9s and handlers will start another three-week session of training on March 9, as they move on to working on article searches. Do you want to support the K9s as they continue to learn? Donate to the Caring for the CPO K9s Fund through the Ward Burton Wildlife Foundation to help them achieve their goals and to protect Virginia’s people and wildlife. 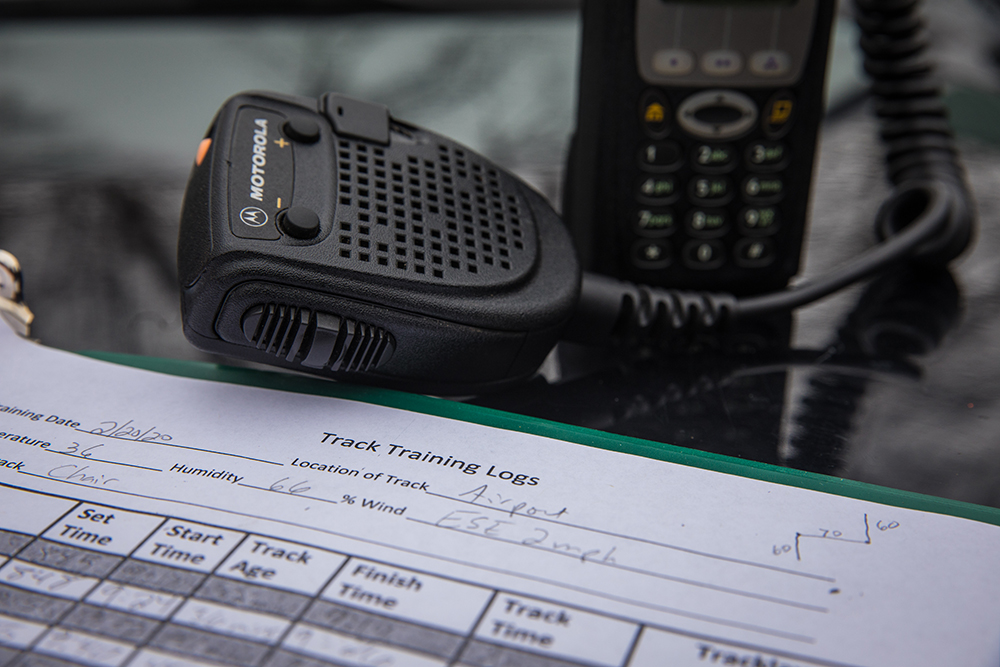 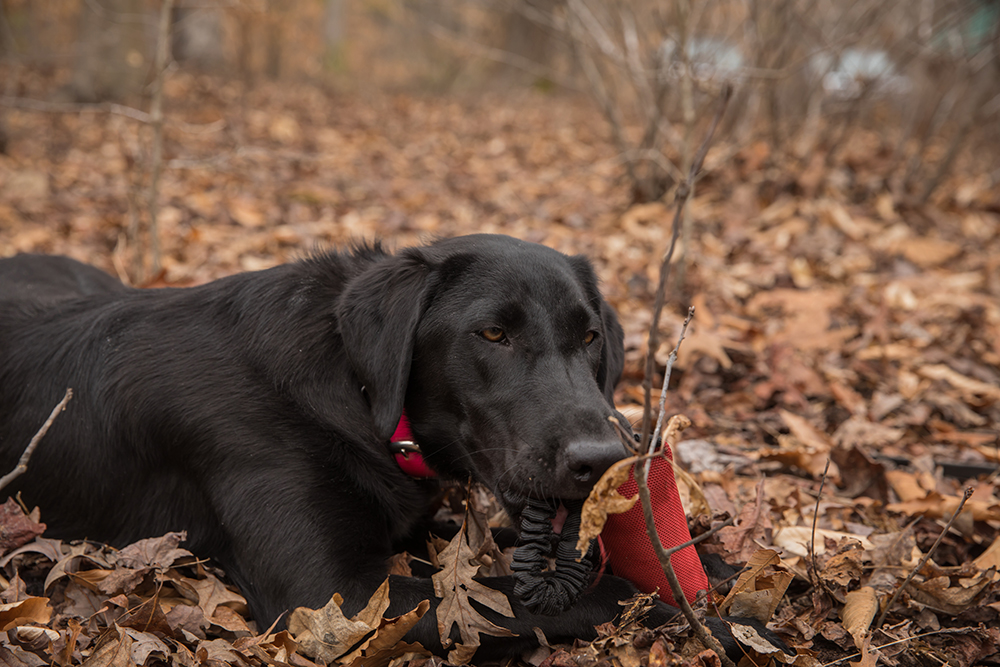 K9 Grace enjoys her toy after completing a track. 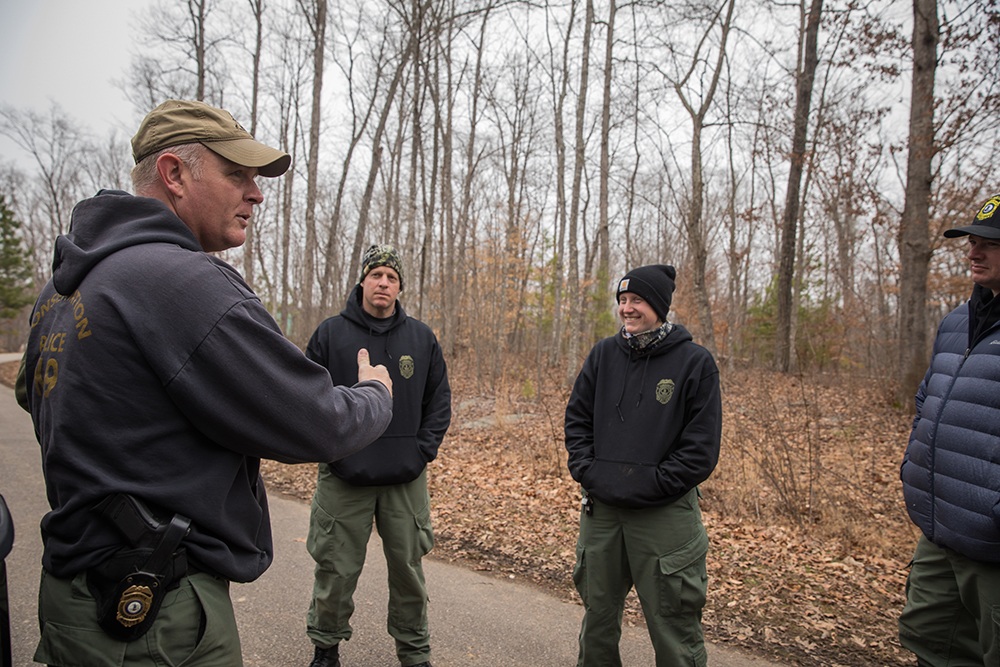 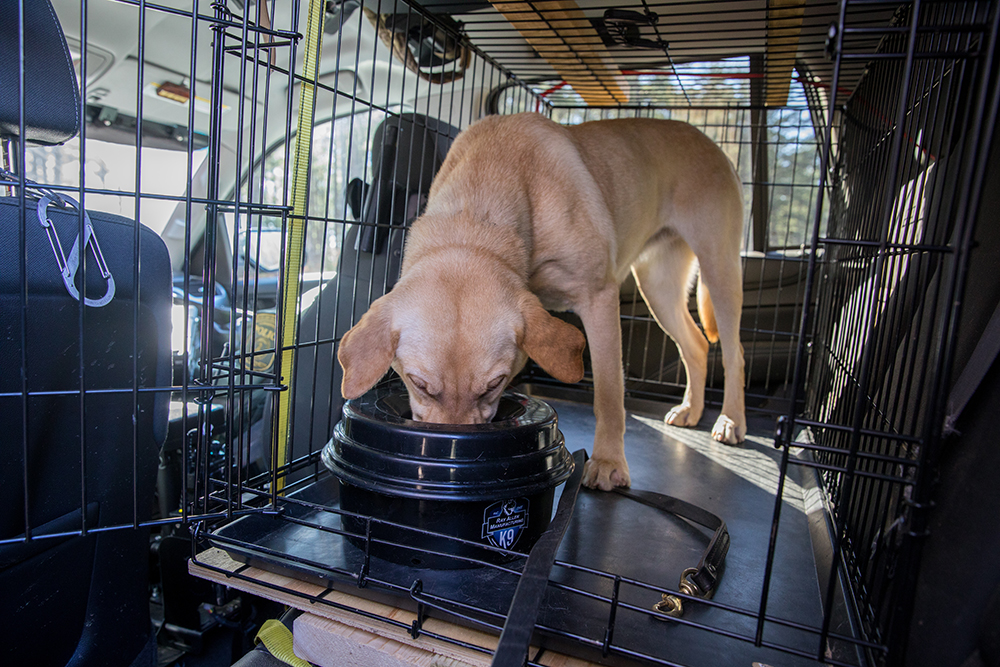 K9 Lili enjoys a drink after an exercise. The K9s travel safely in crates in the CPOs’ vehicles. 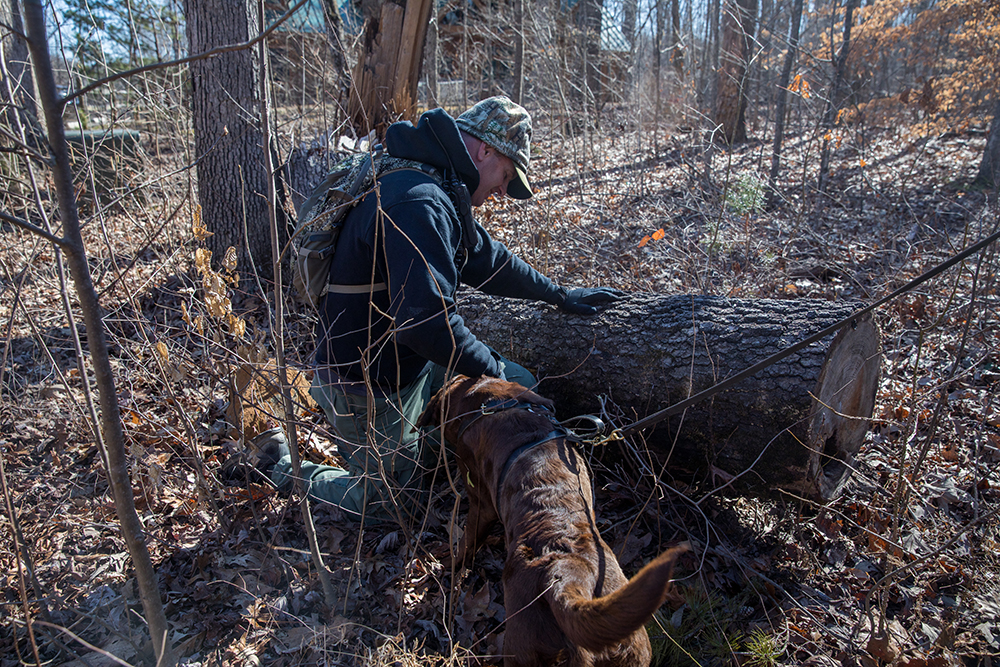 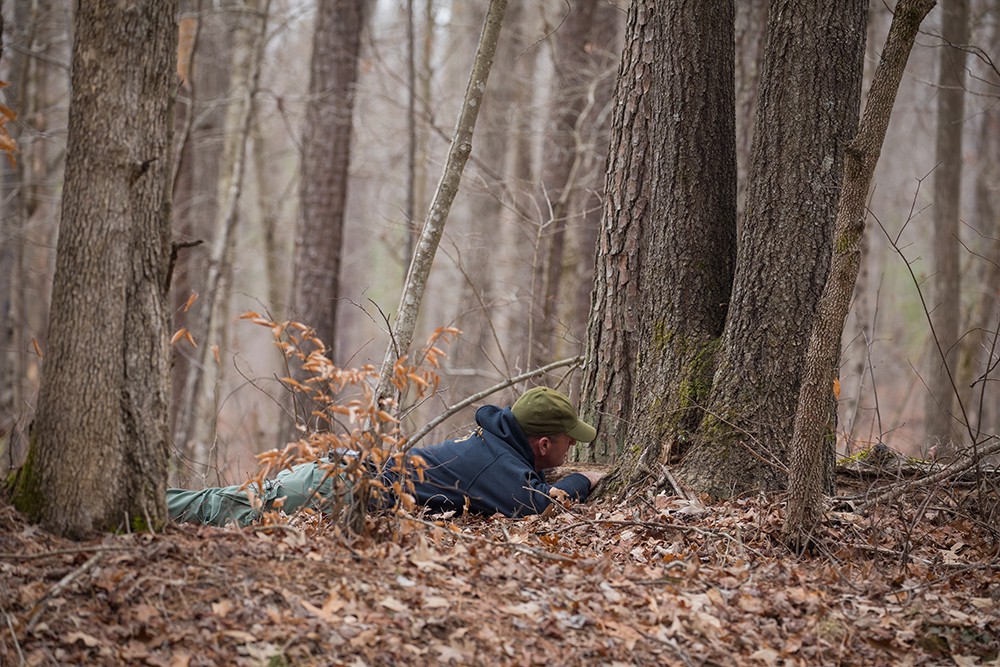 The CPOs took turns laying down the tracks and hiding for the tracking exercises.