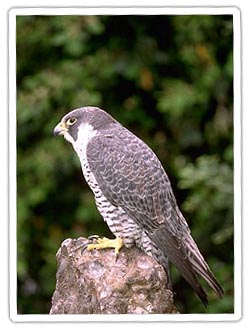 The peregrine falcon (Falco peregrinus) has long captured our imagination as a hunter of the skies, stooping on its avian prey at speeds of up to 200 mph. Peregrines are widely recognized and appreciated thanks to media coverage of nesting pairs in some of North America’s major metropolitan centers, including Richmond. The introduction of peregrines into urban areas is part of a strategy to recover the species, following precipitous declines of its populations in the middle of the 20th century. As the Commonwealth’s wildlife agency, the Department of Game and Inland Fisheries (VDGIF) has the lead responsibility for recovery and management of peregrine falcons in Virginia. Through efforts by VDGIF, the Center for Conservation Biology at the College of William and Mary/Virginia Commonwealth University (CCB), and an extensive partnership (see Project Partners), the falcon is making a comeback in the Commonwealth.