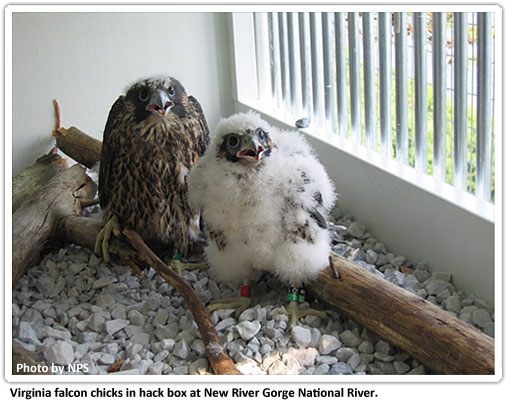 Recovery efforts in the western part of the state began in 1983 with Johannes Gabler’s surveys of 13 of the 24 known historical peregrine nest sites in the mountains. The objectives were to locate resident peregrines, to determine the suitability of sites for releasing birds, and to describe the characteristics of the historic eyries. Acknowledging difficulty in verifying some of the historic sites, Gabler nonetheless found no peregrines or any evidence of breeding. He did, however, rate the suitability of each site he visited for releasing captive-bred falcons, and described his reservations about using particular sites.

The first mountain hack sites were subsequently established in 1985, coinciding with the last year of coastal hacking. The first such sites were on Mt. Rogers and Clinch Mountain in southwest Virginia. In 1988, two more sites were established in the George Washington and Jefferson National Forests. Falcons were hacked at sites in Shenandoah National Park starting in 1989. The only urban hack site in western Virginia was in downtown Roanoke in 1992 and 1993. All told, 131 peregrines were released from 9 western Virginia sites from 1985 through 1993, with a 90% success rate.

Hacking during this period was accompanied by efforts to document peregrine activity and to further evaluate possible hack sites in the mountains. In 1990 the U.S. Forest Service and National Park Service (NPS) coordinated extensive cliff monitoring by project personnel and volunteers. The surveys resulted in several records of single birds and of one pair of subadults in Shenandoah County, and produced documentation of the first confirmed pairs in Shenandoah National Park (see below). In April of 1991, biologists from VDGIF, the College of William and Mary and George Washington and Jefferson National Forests participated in a helicopter survey of historic and potential peregrine nest sites in southwestern Virginia. The two half-day flights covered approximately 26 locations. Sites were classified into four categories based on a variety of criteria, including: vegetation around the cliff face, accessibility to humans and mammalian predators, presence of sheltered holes and ledges, and the presence of vultures, ravens, and/or owls. No peregrines were documented during these surveys, although Dr. Mitchell Byrd of the College of William and Mary had earlier observed a failed nesting attempt at one of the sites examined. Helicopter surveys were conducted again in May of 1992 on the George Washington National Forest and Shenandoah Park. Approximately 100 cliffs were mapped as potentially good nesting sites. Through these surveys, photographs, and groundwork, Dr. Byrd produced a list of sites to search in the future for breeding pairs of peregrines.

These more recent survey efforts have accompanied mountain hacking efforts that have resumed since 2000. Chicks that are hacked are now homegrown, originating from coastal nests and being relocated and released at mountain hacking sites. This approach benefits the Virginia falcon population in two ways. It contributes to efforts to re-establish a breeding population of the peregrine falcon in its former Appalachian range, while simultaneously reducing mortality of chicks from nests on bridges which otherwise have a low rate of survival. Bridges lack the natural updrafts formed by air as it moves up a cliff face, hampering a chick’s ability to soar back to a suitable perch during its critical first flight; this contributes to mortality when the chick ends up on the ground or in the water. The hacking of chicks in the mountains over the past decade has begun to show positive results, with breeding pairs established at a few known sites. The challenges faced by these nesting pairs in the form of weather events and exposure to predators underscores the need for continued monitoring and support of this budding mountain population. The current objectives of VDGIF and our partners are to maintain a stable coastal population and continue efforts toward recovery of the mountain breeding population. With the new pulse of young birds released in Virginia’s mountains since 2000, there may be yet-undiscovered nesting attempts occurring in the Appalachians. Despite limited resources and logistical constraints inherent in surveying remote mountain sites, surveys for nesting pairs in Virginia’s mountains will need to continue in order to document the recovery of the peregrine falcon within the Commonwealth and the broader Appalachian region.