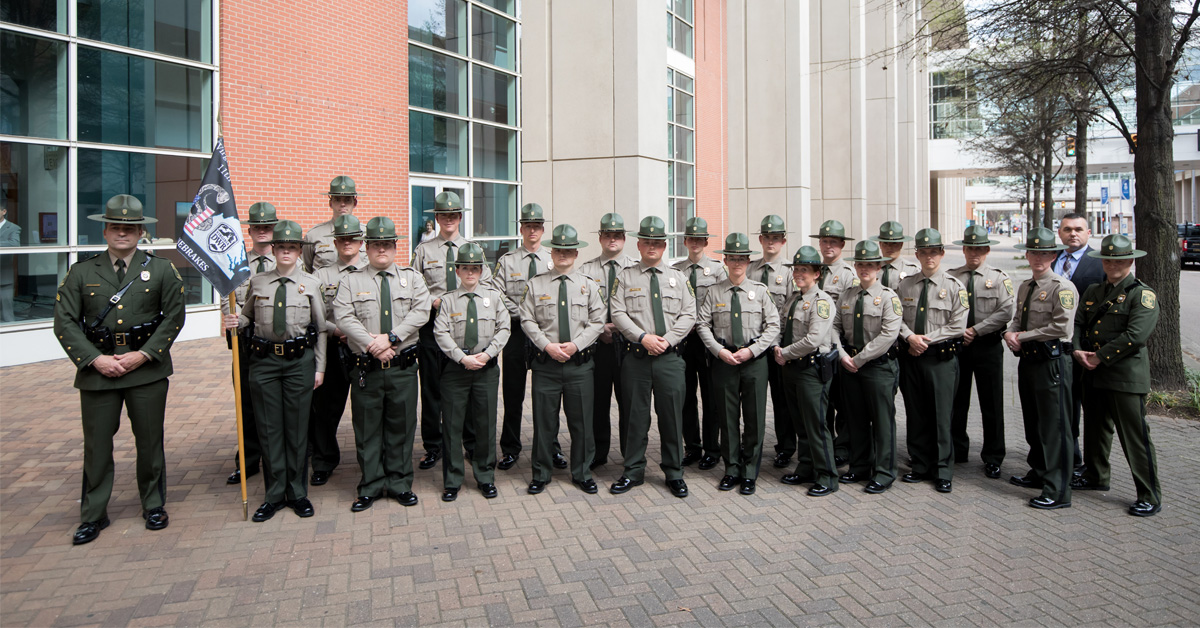 The 16 Basic Academy graduates completed an intensive training program that ran for 26 weeks. They will take up their assignments across the Commonwealth and proceed with field training under the direct supervision of field training officers. 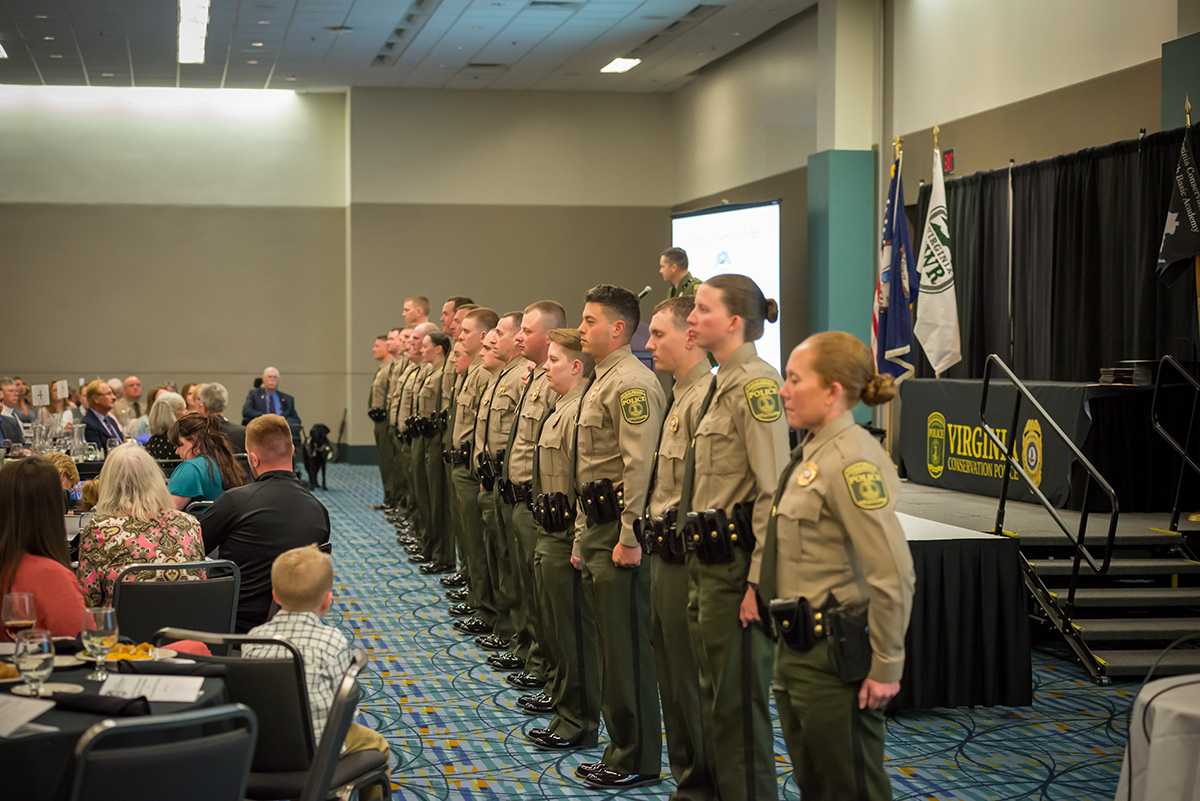 The following is a list of the newest Conservation Police Officers and the areas where they will be assigned:

This is the 11th class to graduate from the Department’s Training Academy. DWR undertook establishing its own academy in order to tailor the law enforcement training program to our officers’ specific needs and unique responsibilities.

Conservation Police Officers must successfully complete training in a wide array of skills including firearm proficiency, crime scene investigations, control tactics, tactical tracking, impaired driving enforcement, and operating watercraft and patrol vehicles. Awards were presented at the ceremony to recognize the hard work and proficiency of the recruits and the dedication of instructors and academy staff. They are as follows:

The Top Shot Award is given to the Conservation Police Officer recruit with the highest overall qualification scores on firearms courses.  Recruits were required to demonstrate proficiency with their issued pistol and rifle during day and night courses in a variety of demanding situations over the course of a two-week training period where each recruit fired well over one thousand rounds.  During the six scored qualifying courses, this officer shot an average score of 97.6%.  The recipient of the Top Shot Award is Officer Shawn Yates, who is assigned to Buckingham County.

The Outstanding Driver Award is given to the Conservation Police Officer recruit with the highest overall qualification scores on all driving courses. The selection is based solely on scores earned during the 48-hour block of driver training during the Academy. Due to the nature of the locations our officers are required to access and patrol, four-wheel drive vehicles are among the primary focus during this training. Training for this type of vehicle goes beyond the traditional training for sedan patrol vehicles utilized by traditional law enforcement agencies. Driving courses include Asphalt Precision courses, High-Speed Reaction courses, Emergency Vehicle Operations course, Off-Road Obstacle Negotiation, All Terrain Vehicle Operation, Gravel Surface Braking Course, and three different Trailer Backing Courses.  This officer earned a score of 98.6 on the evaluation of these courses. The recipient of the Outstanding Driver Award is Officer Trace Hughes, who is assigned to Buchanan County.

The Most Physically Fit Award is given to the Conservation Police Officer recruit with the best overall performance in the three areas tested by the Basic Training Academy. The recruits were required to participate in a physical training program almost every day for one hour for the entire 27-week period of the Basic Academy. This program consisted of CrossFit style workouts, swimming, and running. The four performance areas tested were push-ups, sit-ups, pull-ups and a 1 ½-mile run. The scores were compiled and reviewed by the instructors who assisted with physical training and then confirmed by Academy staff. The recipient of the Most Physically Fit Award is Officer Kevin DeVries, who is assigned to Middlesex County.

The Board of Wildlife Resources Award is given to the recruit who displays exceptional overall performance during the entire course of training. The recipient was selected for his motivation, professionalism, peer leadership, and for being an inspiration to others. They are also recognized for their support of the Academy and staff by providing outstanding logistical and administrative support. The recipient of the Board Award is Officer Ronald Wood, who is assigned to Pulaski County. 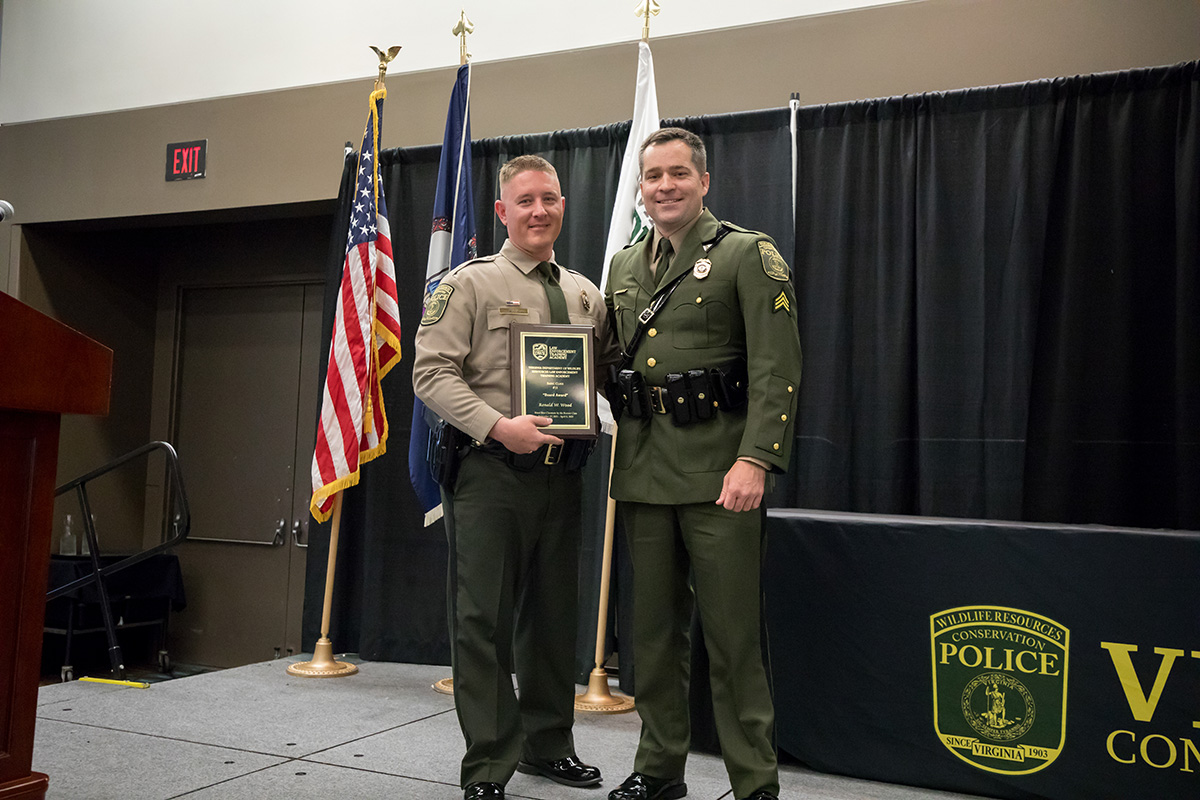 The Boating Award is given to the recruit who displays exceptional overall performance during the two weeks of on-the-water boat operation training.  This training consisted of operating a variety of patrol boats ranging from SAFE boats to tiller-steer john boats. This award was voted on by the Boating Cadre who instructed, evaluated, and worked alongside the recruits throughout the training. This recipient demonstrated the best overall boating operation skills and most successfully applied these fundamentals in real world scenarios. The recipient of the Boating Award is Officer Gracie Talbert, who is assigned to Cumberland County.

The Colonel’s Award is presented to the Conservation Police Officer recruit with the highest test average in the recruit class. This includes 14 exams administered in the Academy and the final law enforcement certification exam administered by the Department of Criminal Justice Services. These exams covered 1,284 questions and covered objectives set by the Virginia Department of Criminal Justice Services, in the areas of Professionalism, Legal Issues, Communications, Patrol, Investigations, and Defensive Tactics/Use of Force. Other exams taken during the course of the Basic Academy addressed the non-traditional law enforcement functions that pertain specifically to the unique law enforcement duties of the Virginia Conservation Police Officer to include Marine Theft Investigation; Hunting Incident Investigation; and laws and regulations specifically pertaining to hunting, fishing, trapping, and boating. With an average test score of 96.4% average, The Colonel’s Award recipient is Officer Shawn Yates, who is assigned to Buckingham County. 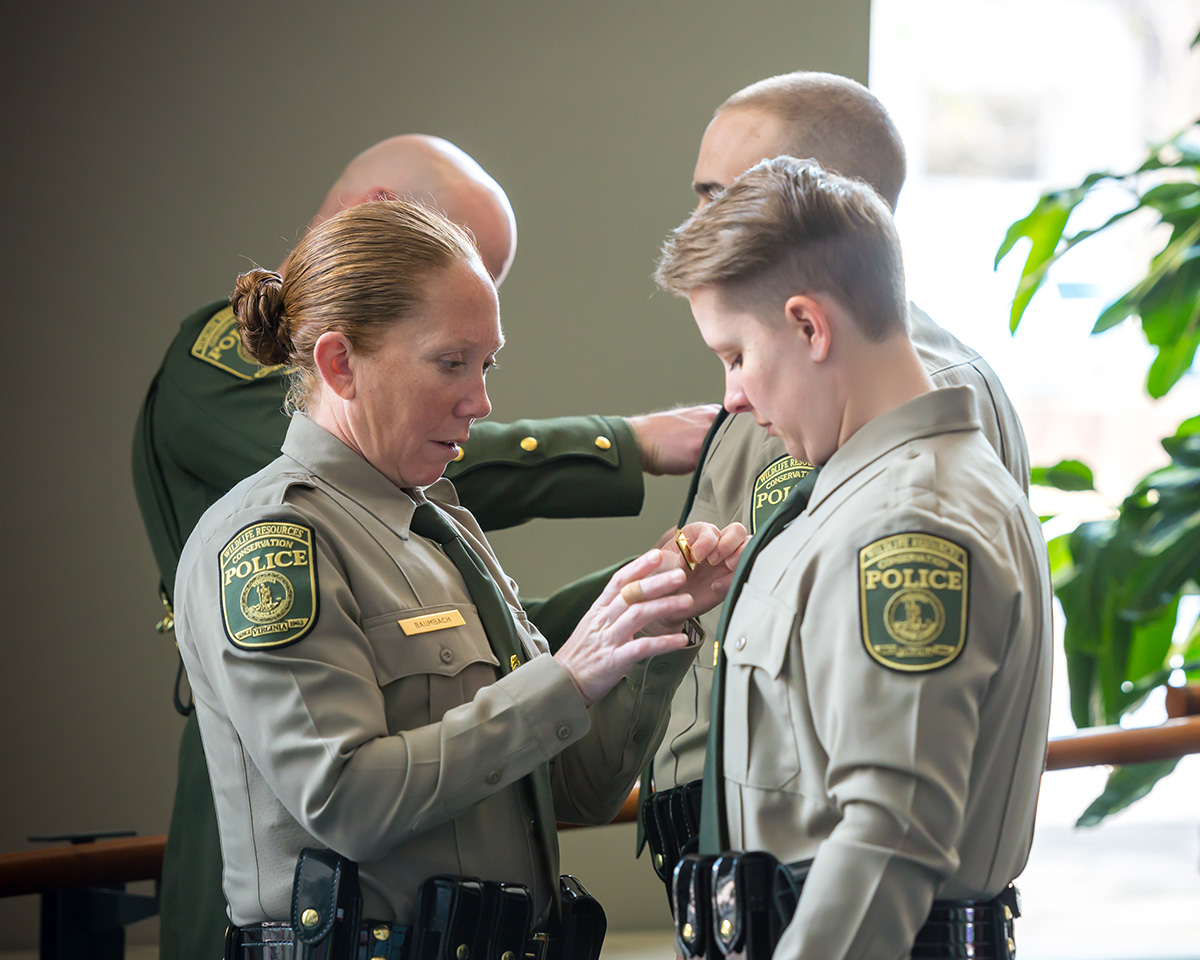 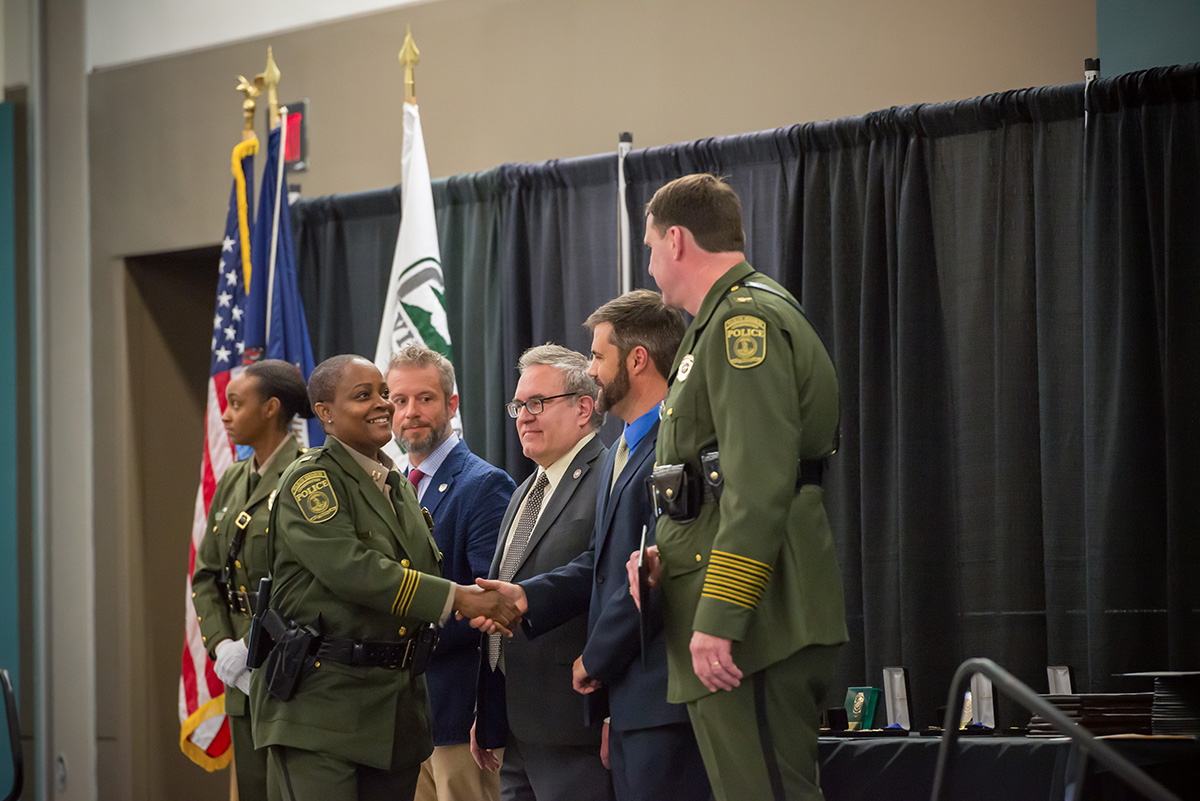 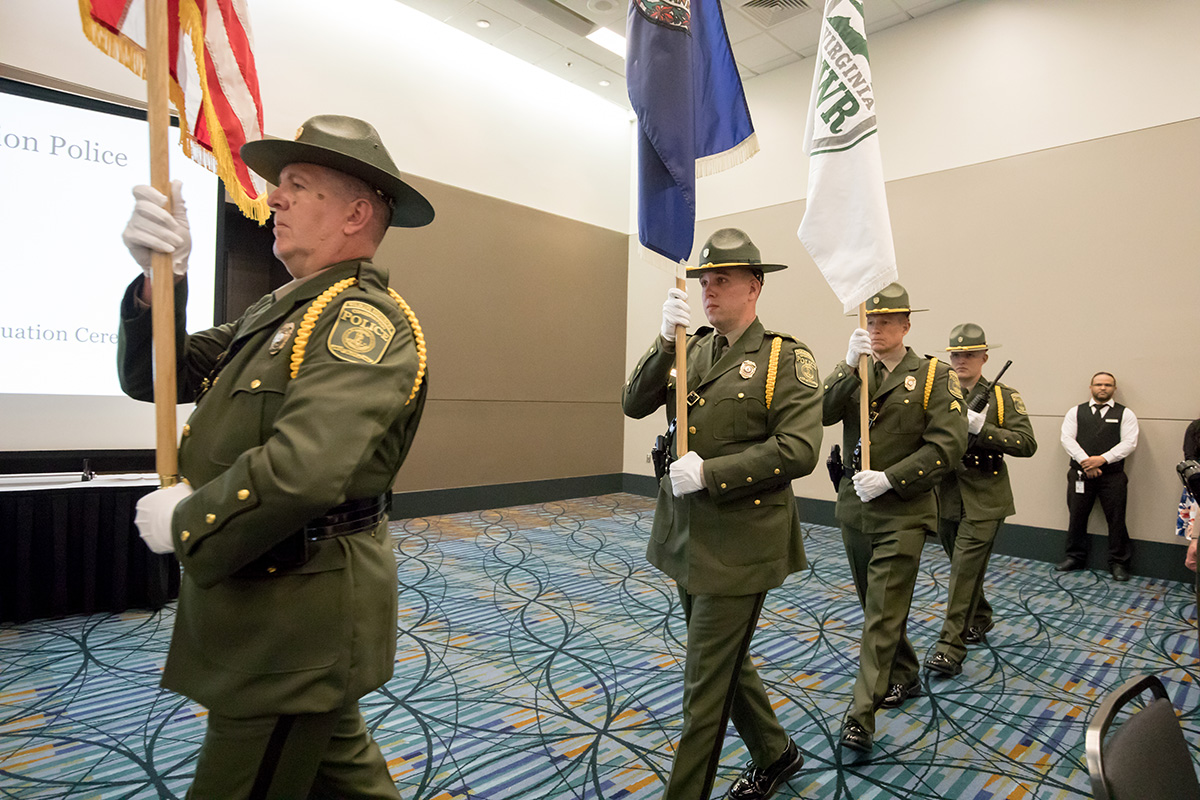 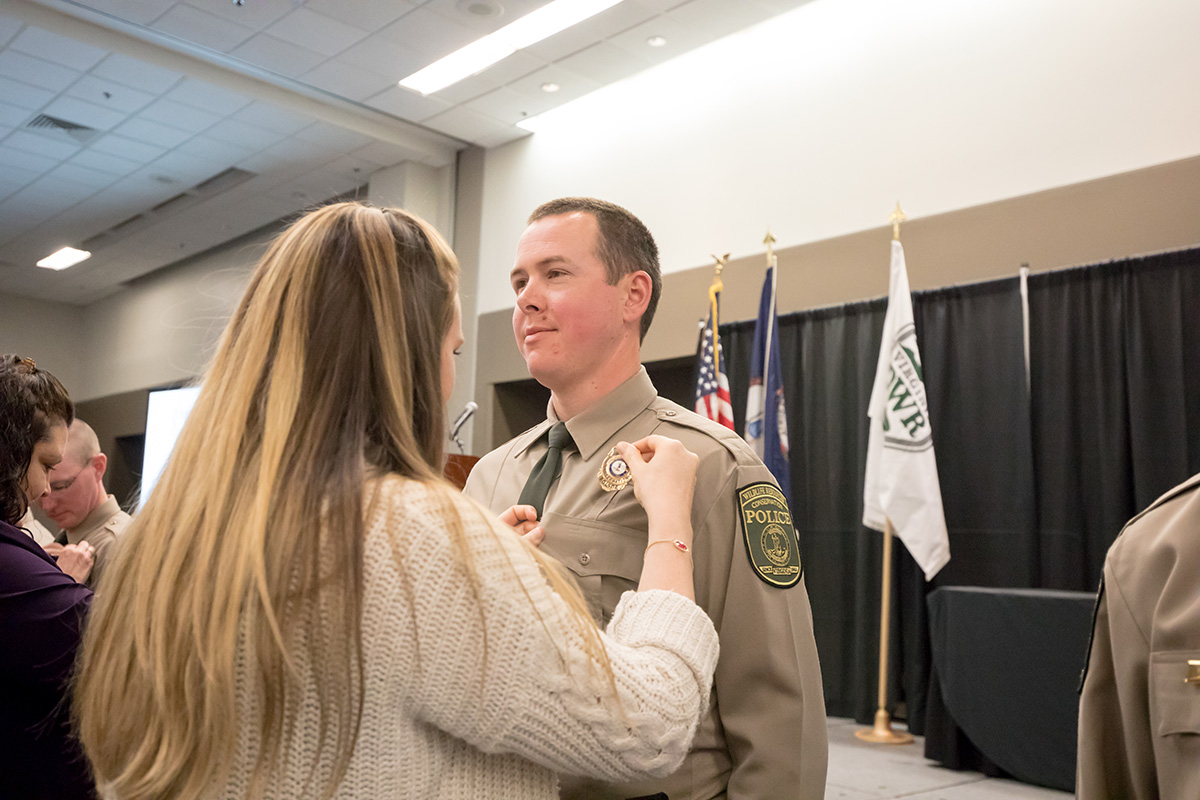