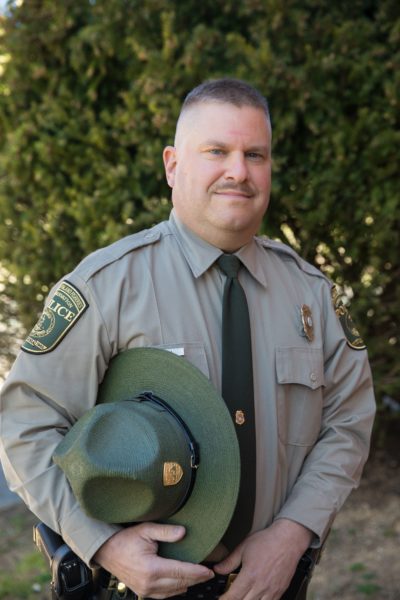 The Virginia Department of Game and Inland Fisheries (DGIF) announced that Officer Mark G. Shaw has been named 2018 Conservation Police Officer of the Year.

Since beginning his career as a Conservation Police Officer in 2011, Officer Mark Shaw has fully embraced DGIF’s mission of Conserving, Connecting, and Protecting the Commonwealth’s natural resources and its citizens.

Officer Shaw is a DCJS certified Instructor, Arson Investigator, and EMT. In addition, he instructs the Agency’s Complimentary Work Force in identifying and issuing damage permits for nuisance wildlife. In 2018, Officer Shaw participated in multiple newspaper and television public service campaigns, initiated or responded to 560 calls for service, made 118 arrests, and participated in 26 educational events including both hunter education and boating safety education courses. He also received seven commendations through our Office of Professional Standards.

“Mark is an avid hunter and angler and uses his knowledge and passion for the outdoors to not only aid him in his enforcement efforts, but to educate those he encounters while afield,” says Major Scott Naff, DGIF’s Assistant Chief of Operations. Major Naff continued, saying, “Mark’s ability to find commonalities with those he meets and the enthusiasm he demonstrates leaves lasting impressions.”

A recent acclamation proves Major Naffs remark. “I have worked as a Magistrate Judge in Huntington, West Virginia for the last 15 years. In that time, I have encountered hundreds of law enforcement officials and presided over their cases. Officer Shaw stands out to be one of the best I have encountered in all my years as a Judge. I would recommend he be considered immediately for a promotion to a position to train other officers in how to approach and speak to the public.”

Officer Shaw’s dedication and integrity along with his passion and enthusiasm for the outdoors and the community he serves makes him a model conservation police officer and invaluable asset to the Commonwealth.