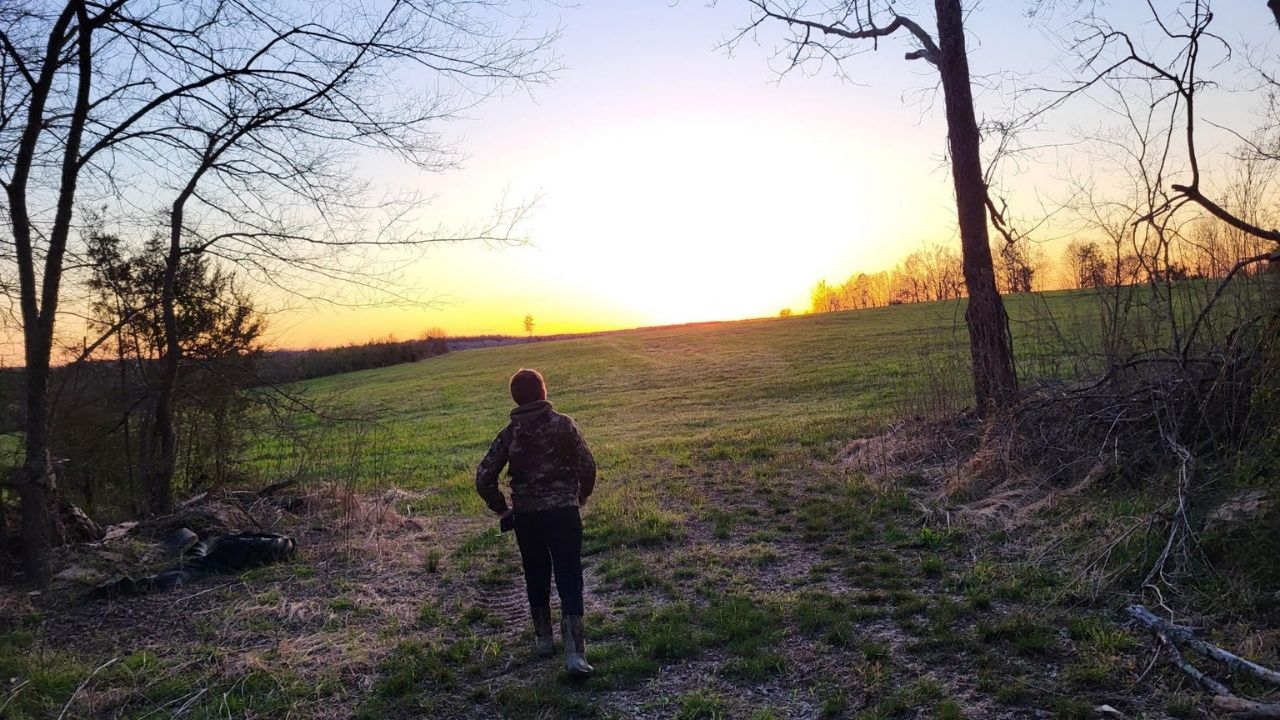 Apprentice hunter Nathan Wolford of Big Rock, Virginia, is a 41-year-old man with special needs. Nathan has been reading about hunting, and watching hunting shows, for many years. Last fall he asked DWR Board Member Leon Boyd if he could go deer hunting. After obtaining approval from Nathan’s mom, Leon immediately started working toward that goal. The past six months have included a lot of “firsts” for Nathan. Nathan fired a gun for the first time, drove a vehicle for the first time, climbed into a treestand for the first time. And yes, Nathan shot his first deer last fall, a spike buck.Building on newly gained confidence from those successes, Nathan wanted to try for a turkey. Nathan’s hunting mentors, Justin and Logan Boyd, gave him a leafy-wear camo suit for his birthday a few weeks ago. This past weekend they took him out for a spring gobbler hunt. Concealed in a portable ground blind, the hunters waited for a gobbler to approach their decoys and calling. Multiple gobblers came to the call, and because the gobblers remained so close to each other, it took considerable effort to wait for an opportunity to have a clean shot at a single gobbler. Thankfully, an opportunity presented itself and Nathan was able to bag his first turkey, a beautiful spring gobbler. 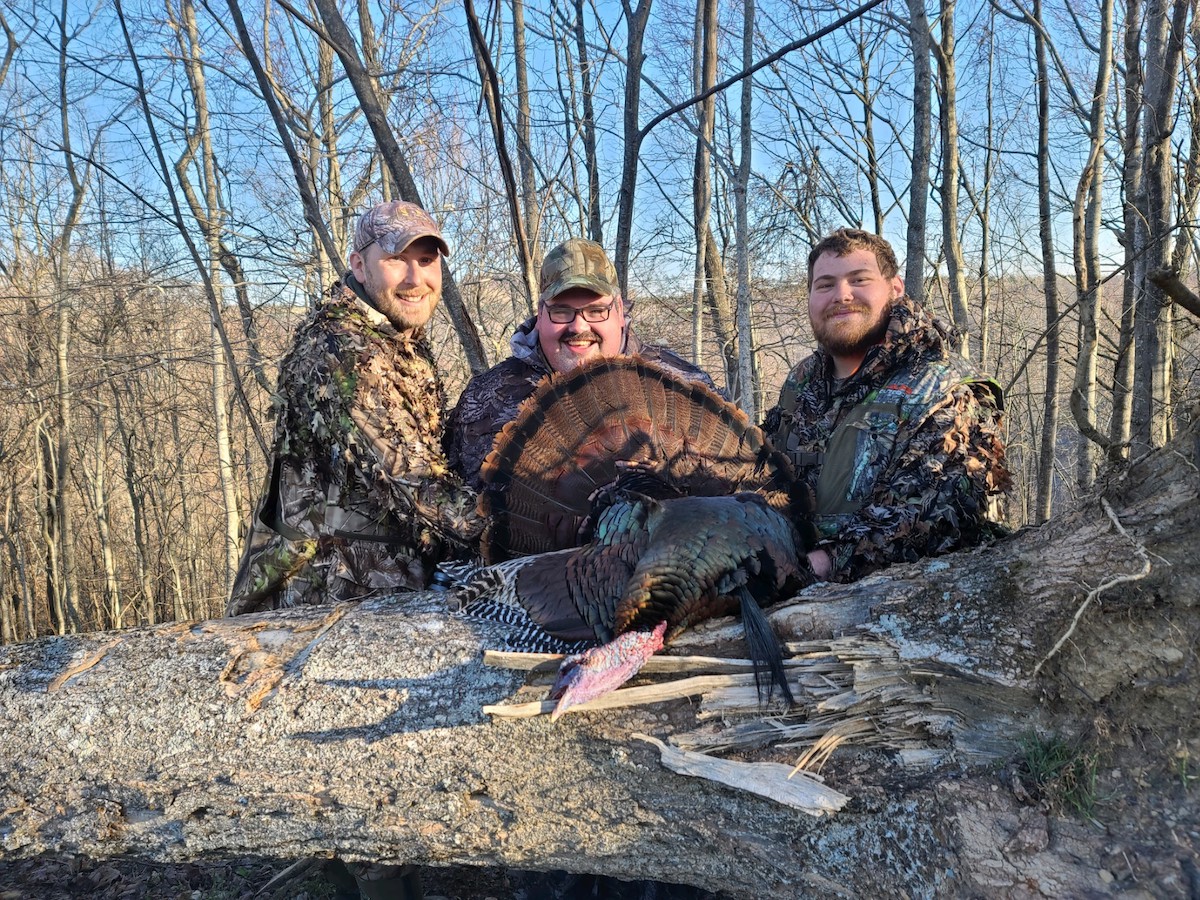 After Nathan’s hunt, Justin and Logan commented that if they don’t see another turkey this season, it has been a complete success and a season to remember for the rest of their lives. 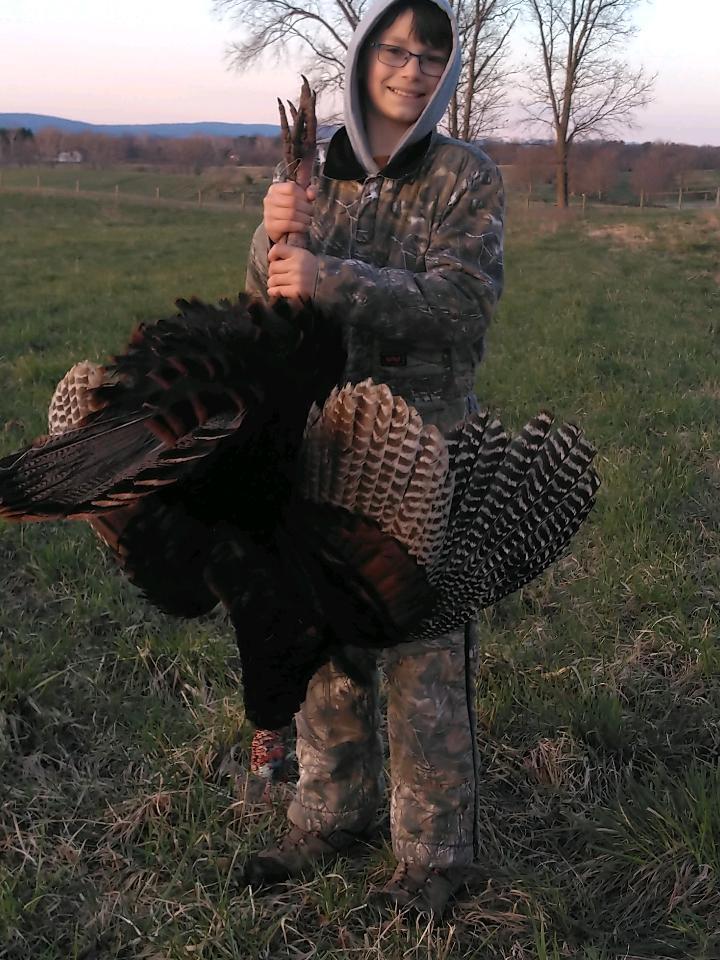 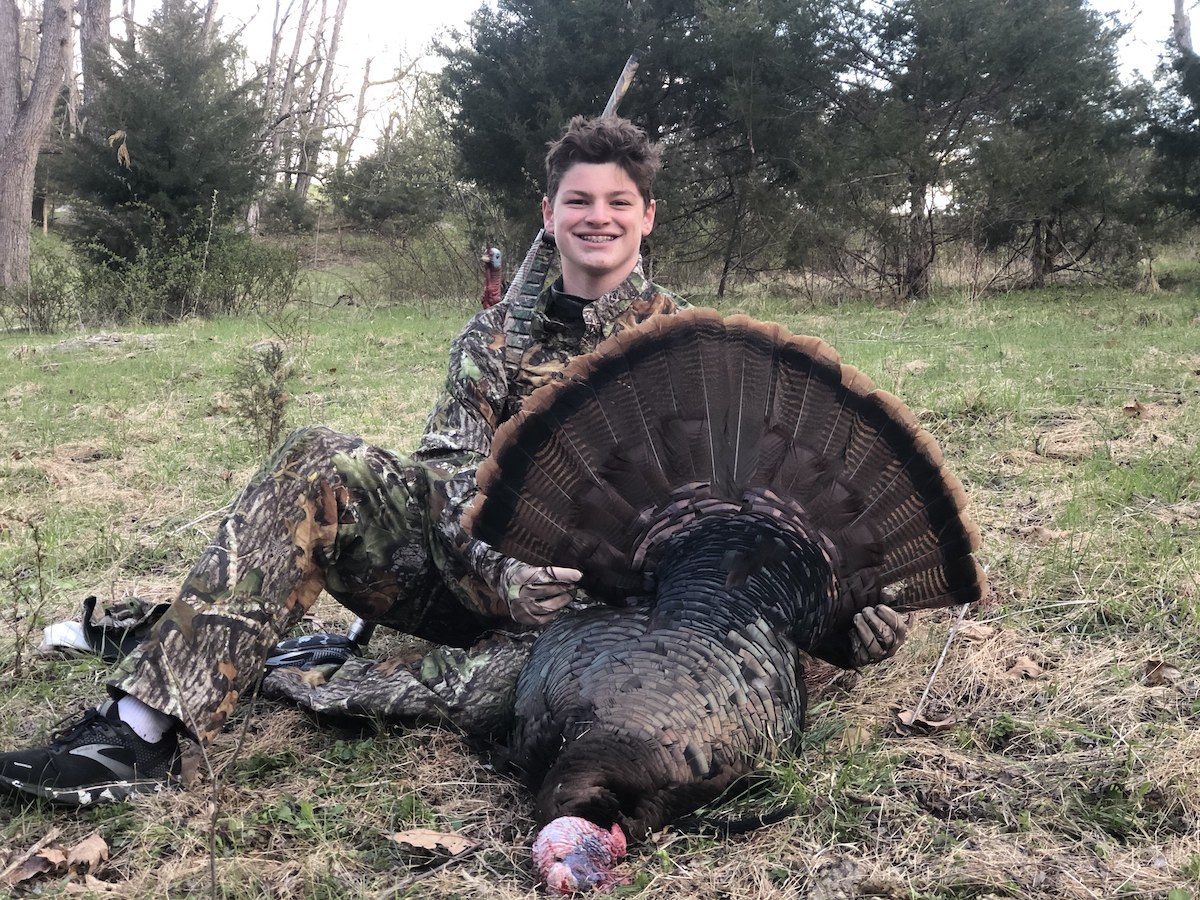 DWR Conservation Police K9 Officer Ian Ostlund writes: “I took my 14-year-old son, Grant, on his first youth turkey hunt near our home in Rockingham County. We had never seen nor heard a gobbler before on the property we were hunting, but we had seen the occasional hen. At first light, we were both shocked when we heard almost immediate gobbles in response to our crow calls. After setting up our decoys and taking our position at the base of a large oak, the gobblers continued to respond to our alluring hen calls, but seemed to be working further away from us, and eventually stopped gobbling altogether. We decided to change our location to a terrain-funnel elsewhere on the property where we would be shielded from the gusting winds.

“Within minutes of setting up, we tried a few more hen yelps and were again shocked to hear a loud raspy gobble close by. We sat quietly for nearly 20 minutes until Grant suddenly said, “Here he comes!” The large mature gobbler was in full strut as he quickly approached our decoys from the ridgeline above us (the very location from which we had just moved). Grant settled the shotgun bead and made a perfect shot, dropping the bird between the decoys. We were elated beyond measure! Neither of us could believe that on our very first youth turkey hunt that we were successful in harvesting a mature gobbler together.  Grant noted that, ‘with deer hunting, it’s almost as if the situation is happening around you, and you only interact with the animal when you take the shot. Turkey hunting is different. You are the situation, and you interact with the animal throughout the entirety of the hunt.’ The turkey weighed 23.5 pounds, had an 11 1/4″ beard, and spurs measuring 1 1/4″ and 1 5/8″. It was definitely the turkey of a lifetime!” 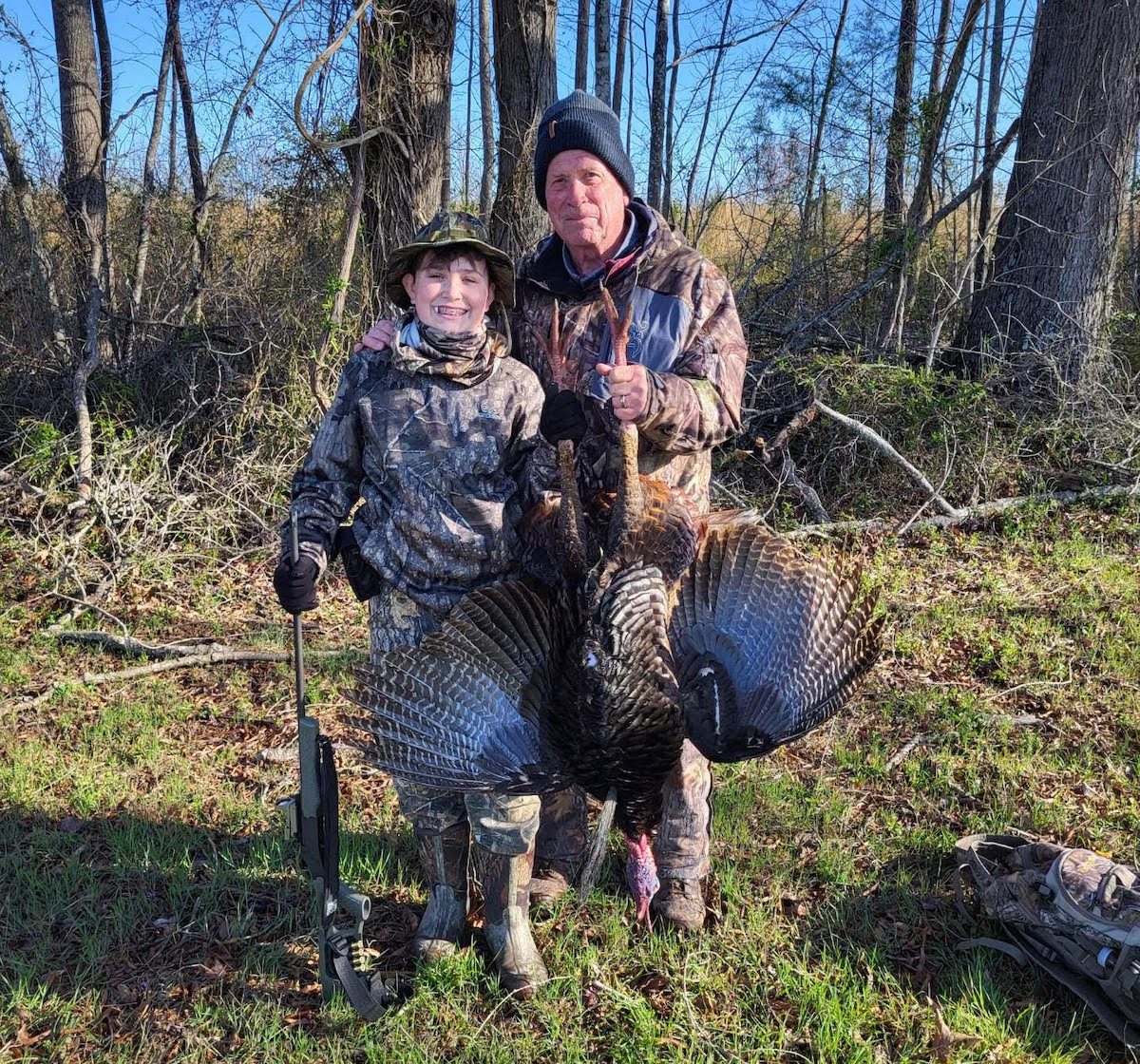 Virginia State Police Senior Trooper Travis C. Comer writes: “Austin Comer and his dad Travis had an awesome youth day turkey experience. They started off with an evening of camping in Nottoway County with hot dogs over the fire. They located a big old tom at sundown on the edge of a large field. After a very chilly night and an air mattress that had a slow leak, which led to very little sleep, they awoke to Austin’s grandfather Jim Burnett pulling up with some warm biscuits from Hardees in hand.  They quickly downed the biscuits and filled in the old man with the story of how they located Mr. Tom the evening before. 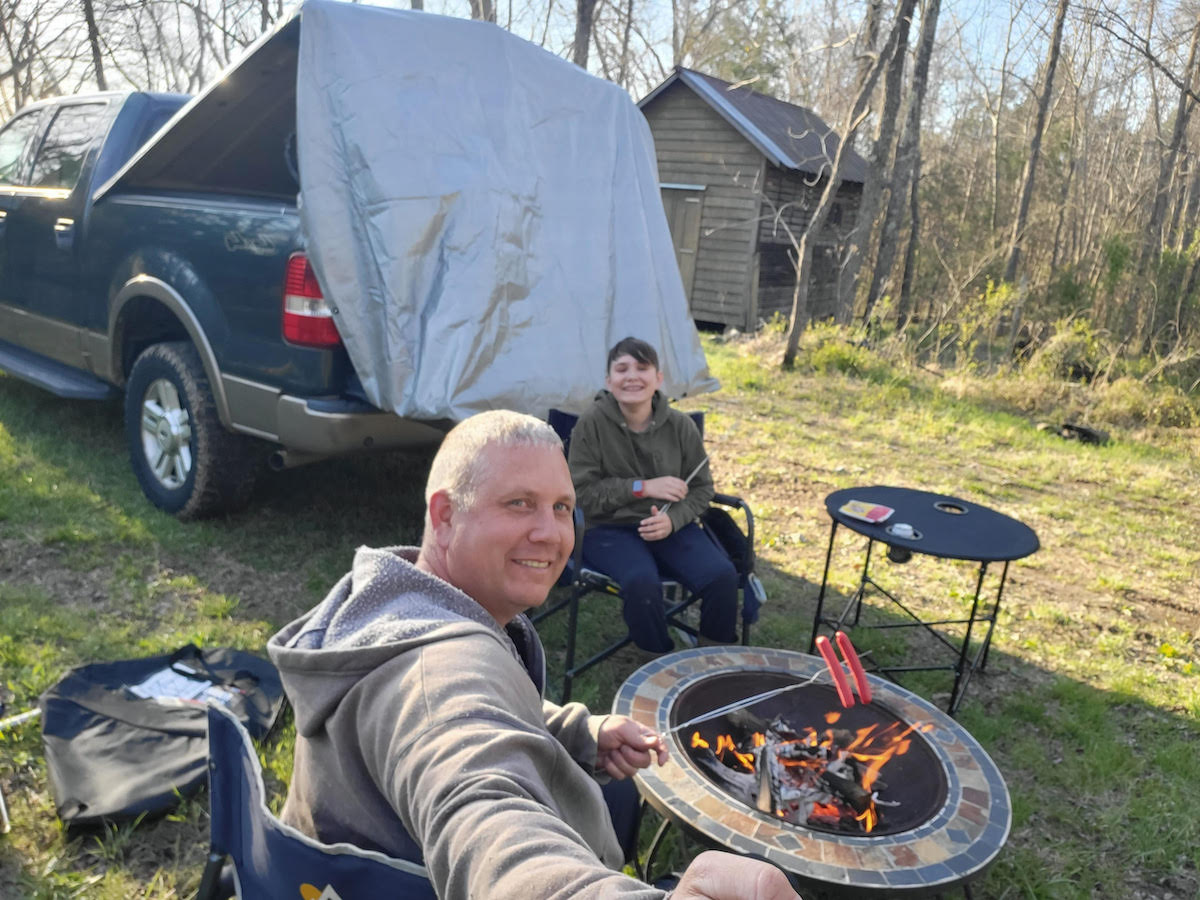 “All three ‘men’ set off across the field before sunrise, in the direction of the big old turkey. They set up a hen/gobbler decoy on the edge of the field within earshot of the turkeys roost. As the sun rose, they listened intently waiting for him to awake and start talking. To their surprise and excitement they had set up in a virtual turkey frat house. The woods came alive with a gobble here and a gobble there, gobbles everywhere. The best they could count was five or six gobblers within earshot. So the dance began as Austin started off with a couple good yelps and a cluck or two.

“After a while with no response his dad had to try his hand at getting a tom’s attention. As most turkey hunters can attest to, they quickly were bested by the real thing. The sounds of a couple soft yelps and clucks from Miss Hen herself. After about an hour and a half of gobbles in the distance, they almost made the same mistake most do. The amount of patience it takes to sit and hear all that gobbling and not make a move is crazy. They discussed their options and how all three could somehow sneak up on an animal that makes his living not getting eaten.

“They stepped out into the field to retrieve their set. But just a few steps away from the decoys Austin said ‘There’s a turkey!’ and pointed into the cutover. There he was, a white-headed, fully blown-up tom, struttin’ his stuff up and down a logging road in the middle of a cutover about 300 yards away. They slowly backed up against the big old oak trees they had selected earlier before sunrise. After about 20 mins and a few clucks and yelps, here he comes. Mr. Tom came right to the decoys as if on a string. Austin waited for him to get as close as he could, then made a great shot with his newest prize, a Rossi Tuffy .410 gauge turkey gun that he had gotten for his birthday. 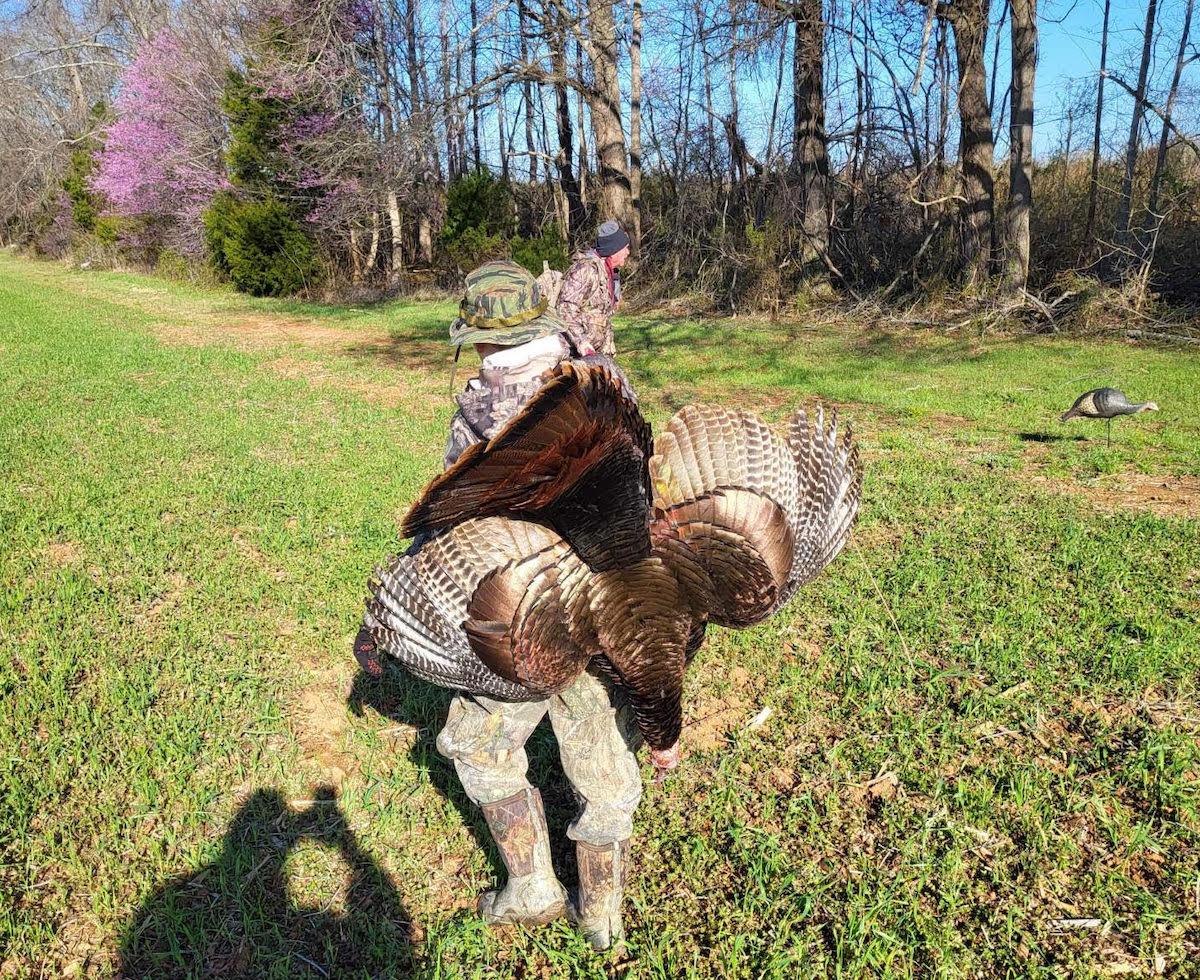 “The turkey hit the ground and Austin leapt to his feet screaming and yelling ‘I got him!’ Travis and Jim were smiling ear to ear and high fiving with congratulations for each other on how great of a morning it was. After lots of pictures and rehashing how things went, they gathered all their gear, and of course the big old bird, and headed to the truck. Now that Austin is 13 he got the honors of lugging his prize all the way back to the truck. It was a great morning in the turkey woods, and a valuable lesson of patience was reinforced again. The turkey weighed in at 23.24 pounds with 1″ spurs and an 11” beard. “