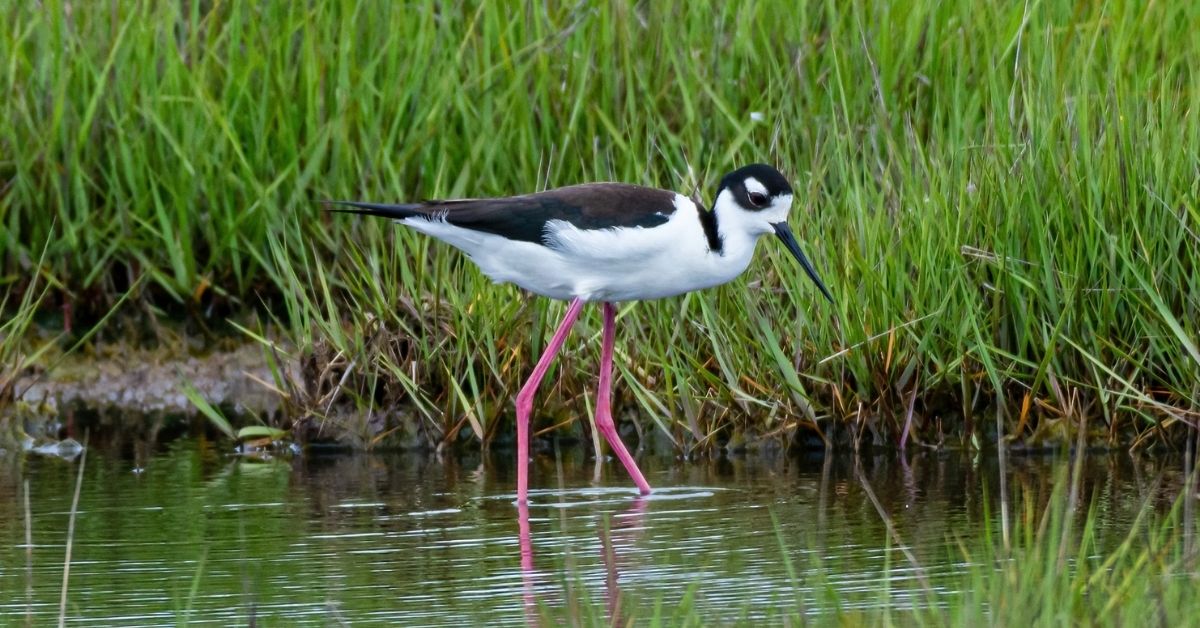 A black-necked stilt spotted on a scouting mission for this Big Day.

On Thursday, April 19, four avid birders convened for a Big Day of birding along a route that led them from Highland County to Chincoteague. Kurt Gaskill, Greg Fleming, Eric Kershner, and Tim Hodge organized their Big Day via Skype. Here is Gaskill’s account of their Big Day, which netted them 208 species as a team.

Tim Hodge and I did a few Big Days some time ago and our best result was on May 15, 2014, where we tallied 199 species; I suggested he join the team because of his depth of knowledge. He agreed and soon after we all Skyped and the strategizing started. Tim did extensive scouting in Augusta and Highland counties and I scouted east of Richmond and on the Eastern Shore. We chose Thursday to avoid weather, Friday traffic and Mother’s Day.

We began at midnight at Bridgewater Treatment Plant – the first two species were Canada goose and killdeer and were quickly followed by wood duck, blue-winged teal, ring-necked duck, American coot, lesser scaup, common merganser, and ruddy duck. We missed the snow goose and eared grebe reported there the day before by Eric and Greg. After that, we took many dark gravel roads and notched mute swan, barn owl, least bittern, Wilson’s snipe, and sora, plus a few common species like horned lark and yellow-breasted chat. We were now west-bound to Highland County.

Our first stop was Bramble Hill, which was the O’Brian mountain residence. Pulling up I heard the tooting of a Northern saw-whet up the slope and Tim also got it, but the owl did only one sequence and Greg and Eric missed it. So, we finished up here with American woodcock and left. The next stop netted an Eastern screech owl calling close to the car.

We started up Laurel Forks Road and the first stop was another tooting saw-whet, but it was distant and hard to hear for all in the group. Fortunately, the third saw-whet stop was easier – Tim and Greg heard bill clapping as they got out of the car. Playback was initiated and it took about 1.5 seconds for the owl to give the wail call, which was easily heard by all as it was less than 50 feet away. So, we all got in the car and sped off.

The next stop yielded both male and female long-eared owls calling several times (there is a distinctive call for the female). Straight Fork produced barred owls and whip-poor-wills. To round out the owls, we heard a great horned owl near the West Virginia border. (This means nearly all the regular Virginia spring & summer owls are in Highland County. Now, if we only had a breeding short-eared!)

Dawn chorus started at this border spot – the first bird was an Eastern towhee, followed by many species such as hermit thrush, veery, junco, golden-crowned kinglet, and black-capped chickadee. As we began our descent, we passed a singing winter wren—no longer easy to find up in this area. The species count soon increased: scads of black-throated blue, magnolia, and black-throated green warblers were heard. We found a wild turkey roosting 60 feet up in a tree, ruffed grouse drumming near a wet patch, and nearby were migrant ruby-crowned kinglet and Northern waterthrush, plus, Greg pulled out a Nashville warbler!

Driving further down slope other highlights were Cooper’s hawk, purple finch, pine siskin, black-billed cuckoo, blackburnian warbler, more ruffed grouse (a real treat to see two males facing off in the middle of the road), alder flycatcher, Baltimore oriole, and raven.  At the edge of Blue Grass Valley, we heard a vesper sparrow sing, found grasshopper and savannah sparrows, and heard many bobolinks. 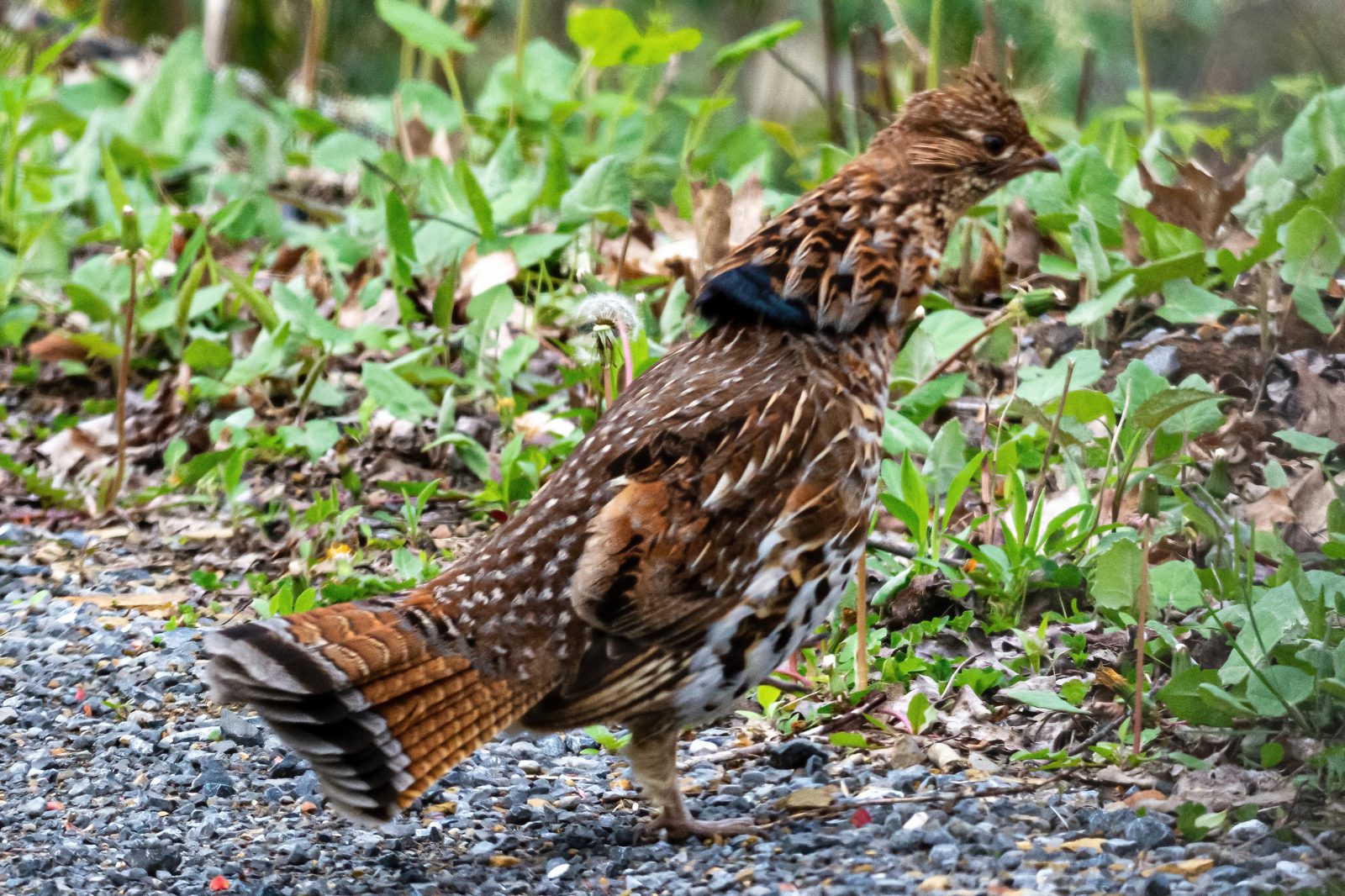 One of the ruffed grouse spotted.

A second visit to Bramble Hill produced golden-winged warbler and nearby we found blue-winged warbler, green heron, American kestrel, and cliff swallow. A well anticipated stop at Forks of Water produced orchard oriole and warbling vireo. As we sped towards Augusta County, we found a pair of broad-winged hawks, cerulean and worm-eating warblers, and yellow-throated vireos. Plus, another golden-winged warbler!

The drive through Augusta County added red-tailed and red-shouldered hawks, white-throated sparrow, and spotted and solitary sandpipers. We passed Afton Mountain with 138 species at 11:20 a.m. (we were running late from our time target – does a Big Day team ever hit its time targets?).

A stop at Observatory Hill in Charlottesville added bay-breasted, blackpoll, and hooded warblers, Eastern wood pewee, and Swainson’s thrush. In addition, we found a Sutton’s warbler (a first for some of us). We then booked, stopping east of Richmond along Rt. 60 to notch summer tanager, white-eyed vireo, Acadian flycatcher, yellow-throated and prothonotary warblers plus  chimney swift. We continued to Blue Bird Farm for the staked-out snow goose and then drove across/under Hampton Roads to the start of the Chesapeake Bay Bridge-Tunnel (CBBT). 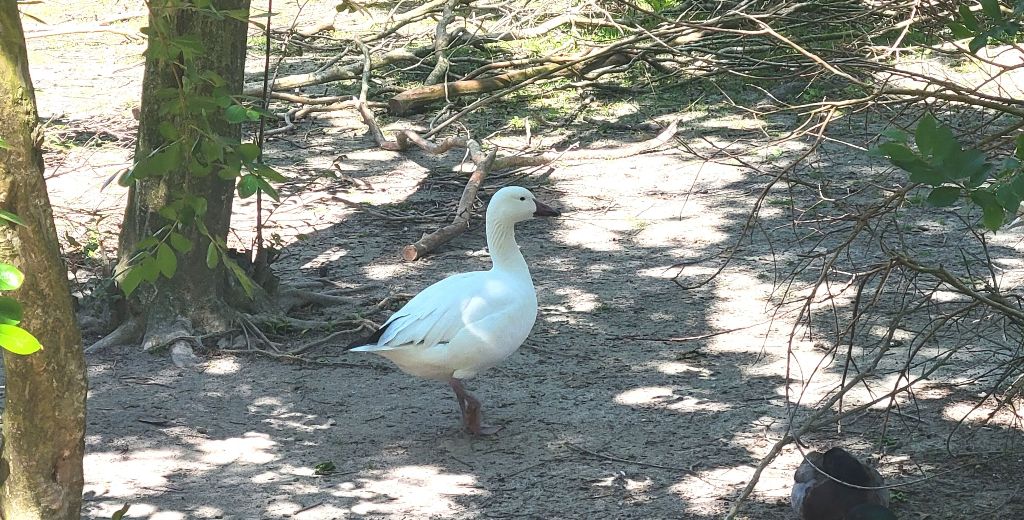 For the CBBT our strategy was that everyone—other than the driver!—combed the sea and horizon with binoculars; this resulted in tallies for Northern gannet, sandwich tern, Caspian tern, common tern, brown pelican, DC cormorant, and common loon. Landfall enabled the driver to glimpse a Caspian tern. Next stop was Ramp Road for some simple shorebirds, bald eagle, prairie warbler, and an amazing Northern bobwhite!

Driving up to near Magotha and Seaside roads produced the expected Eurasian collared dove. Time was now running late so we skipped several spots and headed straight for Willis Wharf. We arrived at Willis close to 5 p.m., and nearly high tide; we got two of the three targets (whimbrel and gull-billed tern but missed marbled godwit) and spotted a bonus Bonaparte’s gull!

Next up: Chincoteague causeway. The oyster bar had, naturally, an American oystercatcher. And the nesting bushes at Wire Narrows Marsh had all the expected birds: great and snowy egret, little blue and tricolored heron, glossy and white ibis, and black-crowned night-heron; yet the site lacked cattle egret. Black-necked stilts were nearby, plus some shorebirds and the ever-present boat-tailed grackles. Next stop was in town for a brown-headed nuthatch behind a motel.

Arriving at the Chincoteague National Wildlife Refuge we went straight for the beach. A quick scan found a small group of sanderling and red knots. I pointed out a least tern flying along the beach as well as another gannet. We checked some nearby shorebirds and drove to the wildlife loop. A few more shorebirds to look over but nothing new, then Eric spotted four red-breasted mergansers swimming behind the shorebirds.  We went to the Marsh Trail platform and waited a few minutes for the yellow rail to (finally) make a noise and then we left as the chuck-will’s-widows started up.

Back on the causeway we found one yellow-crowned night-heron through vocalization near the Wire Narrows Marsh nest sites. We stopped for take-away at Sonic and drove to the Saxis area. We had missed yellow-billed cuckoo during the day, so we tried for it on Marsh Market Road, but no luck (yet, both night-herons were heard!). We then drove over to Hammock Road in the Saxis Wildlife Management Area and pulled out the easy chairs and sat down to listen to the night birds (it’s about 10 p.m.).

We recommend doing a night visit to Hammock Road—there is virtually no traffic and on a cool night the bugs are only at half-strength. The dominant bird is clapper rail with a dozen or so Virginia rails close by. We heard probably 10 marsh wrens and a dozen seaside sparrows. We were surprised by a yellow-billed cuckoo singing behind us; we heard another two later plus a black-billed cuckoo overhead.

Eventually Tim pointed out Nelson’s sparrows singing that we all got on as well as the saltmarsh sparrows singing closer to the bushes where it’s a bit drier (only a few of each). We were surprised by the number of least bitterns out there—at least four and possibly five. Plus, one American bittern, which “oomp’ed” a few times. A distant great horned owl hooted from a bit south of Saxis town, and its juvenile also called out. We heard some quacking ducks and Canada geese from the direction of Saxis.  Overhead migrants called out “seet” but no ID could be made. And two dickcissels overflying called out an hour apart.

The last bird was at 11:45 p.m.—I was checking email when it sang perhaps 20 feet from the car. A clear LeConte’s sparrow song.  The area is somewhat dry—no Virginia rails or marsh wrens or Nelson’s sparrows were close. All got on the bird, even though it moved 50 feet or more away. We compared vocalizations with Nelson’s, but LeConte’s was a perfect fit.  And then the clock struck midnight and we were done.

The final tally was 208 species as a team, with individual totals of 201 to 208. We drove nocturnally 150 miles and in daylight traveled 470 miles.  Our big misses on the route were marbled godwit, ruddy turnstone, ruby-throated hummingbird, belted kingfisher, and Kentucky warbler.

We could not have had this amazing Big Day without the help of many people. We wish you all the best in birds!