A Year in the Life of a Young Great Horned Owl 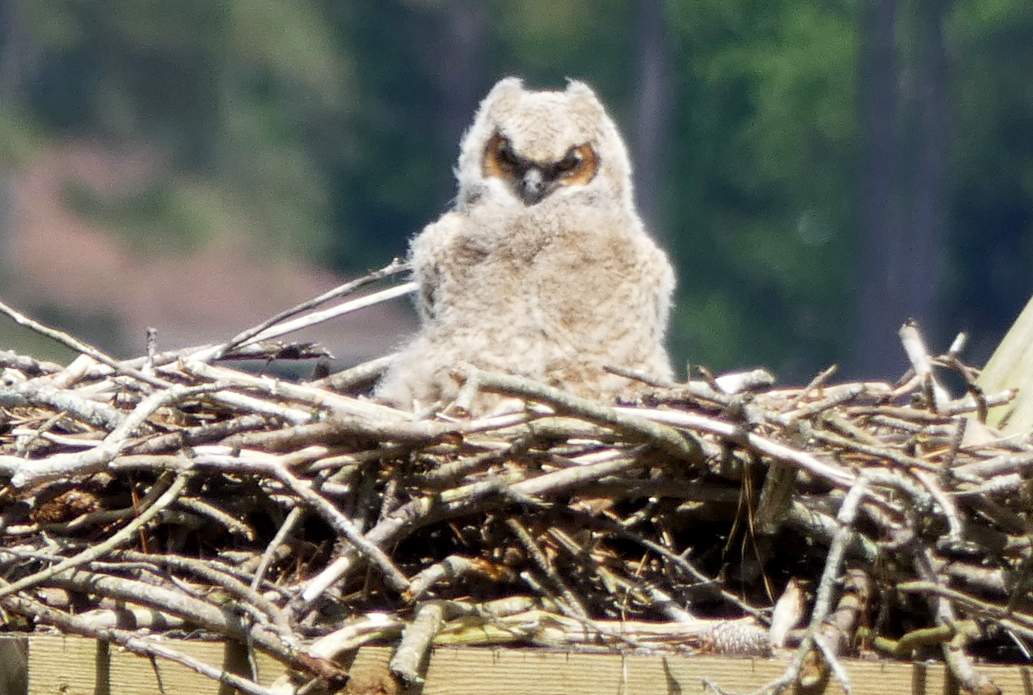 About 15 years ago, I saw a barred owl family learning to fly in our yard early one summer morning. There were at least three fledglings, and it was quite magical. Then they saw our dog, and flying lessons quickly ended. A couple summers ago, I started seeing a great horned owl hunting for moles under a massive cherrybark oak in the side yard. It was very common to see it hunting our garden area in the evenings last summer. I have not heard barred owls since the great horned owl appeared. Last year, I got to watch the great horned owls nest and raise fledglings in a nest by the creek usually occupied by a pair of ospreys.

After watching the osprey pair for several years, it seems to me that ospreys are the extroverts of the raptor world, and, in contrast, great horned owls are the introverts. The ospreys make a lot of noise during all of their activities – nest building, “Look at me I caught a fish,” or time to feed the babies!

In contrast, the owls very quietly brought half the animal kingdom to their nestling, day after day. We started to jokingly call them “the murderers” because they are such successful hunters. The ospreys are very loud when danger is nearby (people, eagles, other ospreys), while the owls communicate danger to each other with quiet little hoots. I never heard the baby owl call until it fledged. Then it started with a quiet begging call that grew louder with time. So, the big surprise was to see the normally secretive owls in such an exposed nesting location.

For both species, I do not envy the amount of time the female has to sit on the nest, nor the energy both parents expend on feeding their newborns. Watching a bird sit on its nest during a 6-inch downpour is flat painful. Whoever coined the phrase “free as a bird” never watched a pair of birds raise their young.

We heard a lot of great horned owl hooting in January. I first saw the female owl climb into the osprey nest on February 8. I saw her leave the nest a few times in the evenings at dusk. 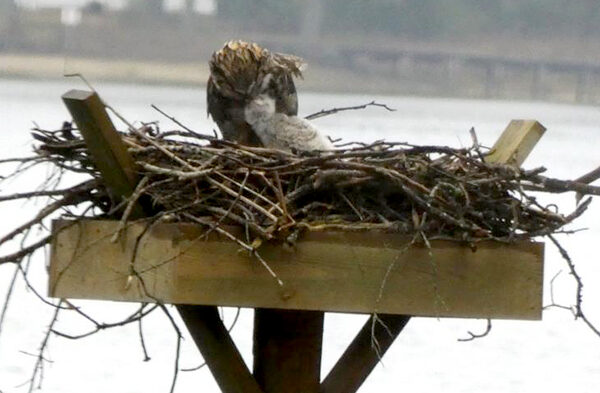 One of the adult great horned owls feeding the chick.

During the third week of March the female owl exhibited some new behavior – eating in the nest – and she was bent over at times, possibly feeding chicks? I saw her move a white blob around in the nest, but at the time, I thought it was fur from something she had eaten. On March 29, it looked like there might be two white blobs in the nest, but on March 31 I saw the female wrap her wing around just one chick during a cold front passage with wind and rain.

April 2 at dusk was the first time I saw the owl chick alone in the nest. By April 10, the female was leaving the chick alone in the nest for longer periods. By April 12 it seemed that the chick was alone in the nest most of the time. However, it appeared that one adult was very close by at all times. Sometimes it seemed like you could tell where the adult was located according to the direction the baby owl was facing. One afternoon I saw an osprey swoop down over the nest, and then it came back a second time with talons out, apparently to snatch the owl chick. By the time the osprey reached the nest on its second dive, an adult owl was suddenly right next to the chick in the nest.

April 12 was the first time I saw the chick flap its wings. On April 15 it was eating on its own. It was wobbly when walking around the nest and flapping its wings more often.

Around April 18, the owl chick started standing on the edges of the nest a lot. Sometimes it would lay down with its face over the edge of the nest, and it seemed to be observing the ground below. Sometimes I could just see a lump in the nest, and I realized it was napping face-down! 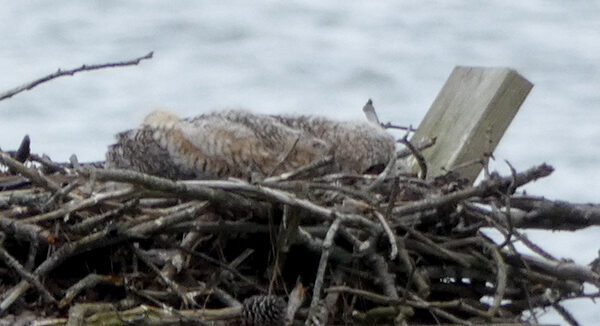 On April 22 I saw an adult bring a black snake to the nest around 11 a.m. The adult and baby both jumped in the air, so I think the snake was still moving. The adult then grabbed it just below the head and tore its head off.

Crows seemed to show up in the nest area every morning around 7 or 8 and fuss.  It seems like the adults make an effort to fly off and draw the crows away from the nest.

On the morning of May 3, I heard the female calling quite a bit. The male flew to the nest and sat with the baby for a while. The male picked up the carcass of perhaps a rabbit, which was already in the nest, and took a nibble. It flew off as crows approached. Before the male left the nest, he climbed onto the left perch. The baby followed it and seemed to be nibbling at the male’s feet. After that, I saw the chick fly from one side of the nest to the other. By evening, it was flying from perch to perch. 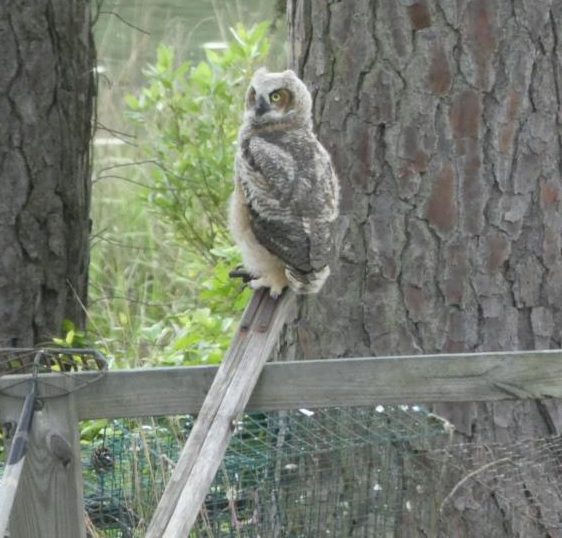 The fledgling owl perched on some oyster tongs in the yard.

May 4: FLEDGE DAY! I woke up to an empty nest, but quickly saw the baby owl perched on some oyster tongs. An adult went to the platform with some food, but the chick was only able to climb up the support beams and could not reach the nest. In the afternoon, the baby owl hopped onto a fallen pine tree, then climbed its way up one of the limbs so that it was perched 15-20 feet high. The male owl brought something for it to eat and flew back and forth a few times near the chick, but the chick stayed put on its perch. The chick stayed on the ground in the yard in between climbing to its pine bough perch for the next day

By May 6, I saw the fledgling fly from its perch in the pine branch to a nearby oak. One of the adults was in a nearby pine tree. In the evening it flew from the oak back to its pine branch perch, then flew over to a big pine tree. By the next day, it was 40 feet up this pine tree in some really large limbs. Around lunchtime it looked like it was trying to lay face down on the limb and take a nap.

For the next two weeks, the owl seemed to hang out in the big pines near the shoreline. It would make faint, screechy noises and flaps around quite a bit when one of the adults calls nearby. By May 25, it sounded like the fledgling had learned to fly, as I could hear begging calls moving around the yard pretty fast. We saw the young owl fly from tree to tree along the old driveway as we drove out at dusk a few days later. 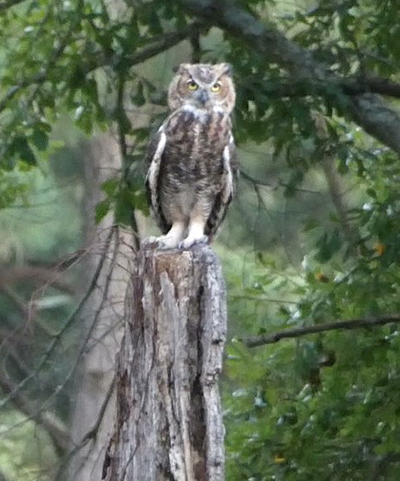 In August, I saw the juvenile great horned owl with all its mature feathers.

In June, I had the windows open on cooler nights and it seemed like the young owl would make begging calls all night long, but I wouldn’t see it.

If I had to summarize the life stages I’d seen so far, it would go something like this:

Egg in nest – Mom is the definition of patience. Lots of sitting still through wind and rain with no cover.

Chick in nest – Best part of life. Chick is wrapped up in mom’s wings or snuggling with an adult at all times. It enjoys frequent fresh food deliveries. There are occasional harsh storms at night, but everyone is still there in the morning.

Getting ready to fledge – Parents keep leaving chick alone against its wishes and boredom sets in. The chick looks like a baby stuck in a crib.

Fledgling – The chick seems to be very excited the first couple of days and wanting to explore the yard. It tries to get back to the platform nest for breakfast, but cannot fly high enough. It spends the next week moving higher and higher in the trees. We no longer see the food deliveries, but the owl keeps growing. I have not seen the owl return to the platform nest at all.  It spends its time higher up in the trees.

Throughout the summer, the young owl learned to hunt, and we’d see it and the adults every now and then in the yard. At times during the fall, we would hear the owls hooting back and forth, but saw them rarely.

On January 4 of this year, I saw the male owl (I think) call from the nesting platform. He leaned his body forward to project the calls over the water. The calls were very loud, with a few extra hoots at the beginning. After calling from the platform several times, he flew up the creek. I can’t wait to see if this great horned owl family will nest here again this year!