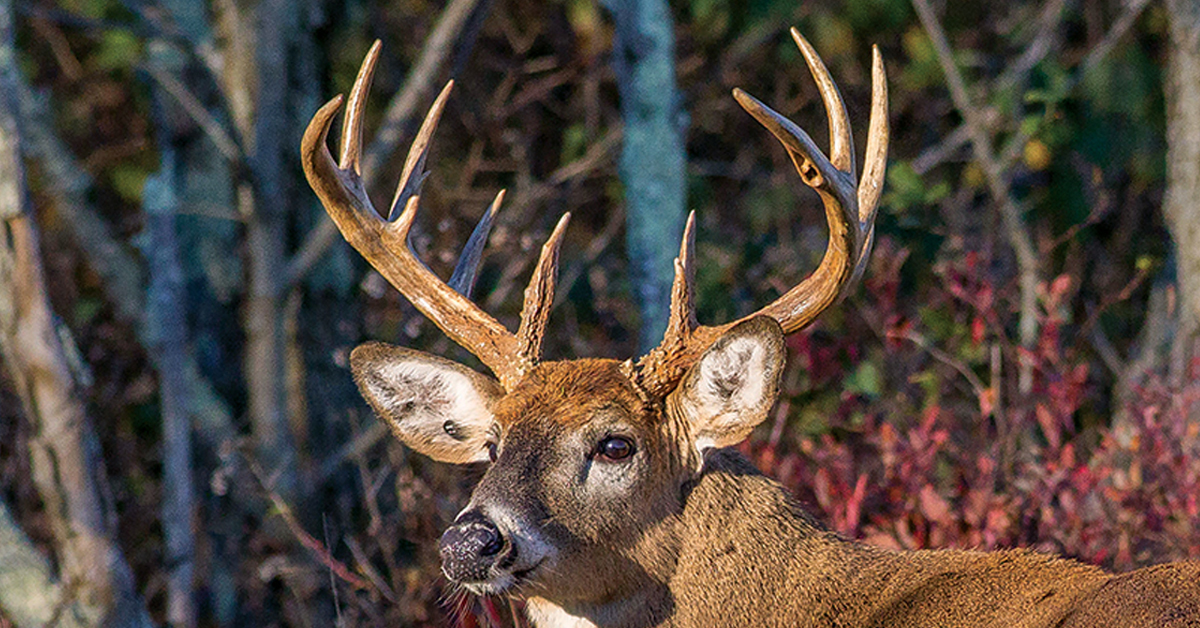 Antlers are found on all members of the deer family (Cervidae) in North America including deer, elk, caribou, and moose. Caribou are the only species in which antlers are typically found on females in addition to males.

Antlers are often called “horns” by deer hunters, but they are not. Horns are found on sheep, goats, and cows and are formed from hair-like tissue that grows over a bony core. Horns are typically not shed, and some species, like big horn sheep, can be aged by counting the annual growth rings on their horns.

Unlike horns, antlers are true bone and are composed primarily of calcium and phosphorus and are deciduous. Deciduous means antlers are dropped or shed and grown anew each and every year. They grow from pedicels located on the frontal bone of the skull. The pedicels, which begin growing at a couple months of age in buck fawns, provide the base from which the antler will grow. The small, hair-covered bumps on a 6-month-old male fawn’s head (a button buck) are the pedicels. They are not antlers. Infantile antlers or actual hardened antlers on a buck fawn have not been documented in Virginia but have been reported in other states. Deer grow their first set of antlers when they are approximately one year of age.

A button buck. Photo by Shutterstock

The skin or tissue that develops at the top of the pedicel reacts to hormones in the deer body and actually causes an antler to grow/develop. The most interesting aspect of this antler growth tissue is that, if it is surgically removed and grafted to another part of the deer’s body, an antler will grow there. For example, it would be possible to surgically produce a unicorn deer or a deer with 10 antlers growing out of its skull or any other part of the body.

The annual antler cycle is ultimately controlled by day length or photoperiod. The brain contains a kind of clock that measures the periods of light and dark and uses this information to ultimately control the secretion of the reproductive hormone testosterone in males. Testosterone controls the antler cycle. In tests, bucks kept in constant 12 hours of light and dark were unable to shed their antlers and grow new ones, and bucks kept in constant light grew and lost three sets of antlers in two years.

Growth of antlers typically begins in April in response to increasing day length. In fact, antler growth is one of the fastest known types of tissue growth in mammals, and a deer’s antlers can grow at a rate of ¼ inch per day. Antler growth begins by a bud forming on the pedicel. Within a month, the first tine or brow tine will have begun to form or split off. Approximately a month later, the second tine (G2) will have begun to form. In just four months, the antlers are fully developed. During the summer months of antler growth, bucks live in reclusive bachelor groups and restrict their movements.

When the antlers are growing, they are full of nerves and blood vessels and are covered with a hairy skin covering tissue commonly called “velvet.” Antler growth is like building a skyscraper. What is first built is the structure or a frame or matrix. Think of pouring concrete; you must first build a form. That is what deer do. During the early summer, deer antlers are soft to the touch or spongy. Toward the middle of summer, as the form is being finished, the deer begins to “pour” the bone. 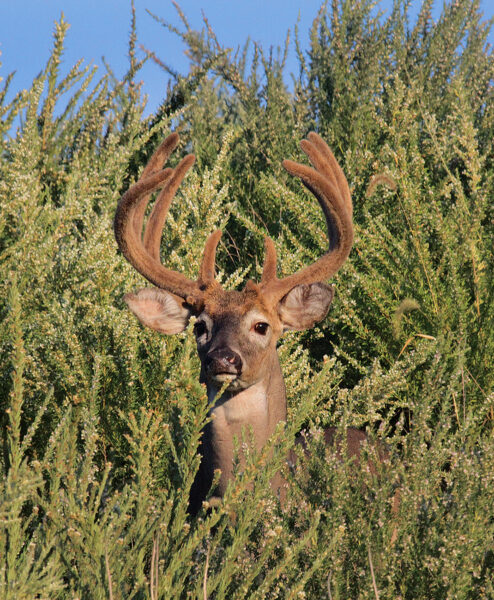 A buck in velvet. Photo by Andy Maneno

By late summer, as day length decreases, testosterone levels begin to increase, the form is filled, and the antler begins to harden. Finally the blood vessels within the antler itself are filled and lose their ability to nourish the velvet, and it dries up and falls off. The velvet is typically totally removed in a day, and some of it may be eaten by the buck. In Virginia, most deer are in hard antler by September 15. Contrary to popular belief, deer do not rub their antlers on trees just to remove the velvet. In any given year, an individual buck may make hundreds of rubs, 99.9% of which are made after the velvet has already been removed.

Hard antlers remain on the deer through the peak of breeding (mid-November in Virginia) until late fall or early winter. In response to continuing shortening of daylight and decreasing testosterone levels after the rut, an abscission zone forms at the junction of the pedicel and antler. An erosion of the bone takes place at this seam and eventually the antler falls off, leaving a bloody depression that quickly scabs over.

Both antlers may fall off at exactly the same time, or one antler may be held for weeks or months after the first antler is shed. Each year in Virginia, the Department of Wildlife Resources (DWR) receives calls in late December about deer hunters shooting shed-antlered bucks. Most bucks in Virginia shed their antlers in January and/or February, but DWR frequently receives reports of deer in hard antler in March up to April. Several rules of thumb can be applied to when deer shed their antlers. Large antlered older bucks typically shed their antlers earlier than young, small-antlered bucks. This may be due to the large amount of energy they expend during the rut. Similarly, deer in good condition typically hold their antlers longer than deer in poor condition. 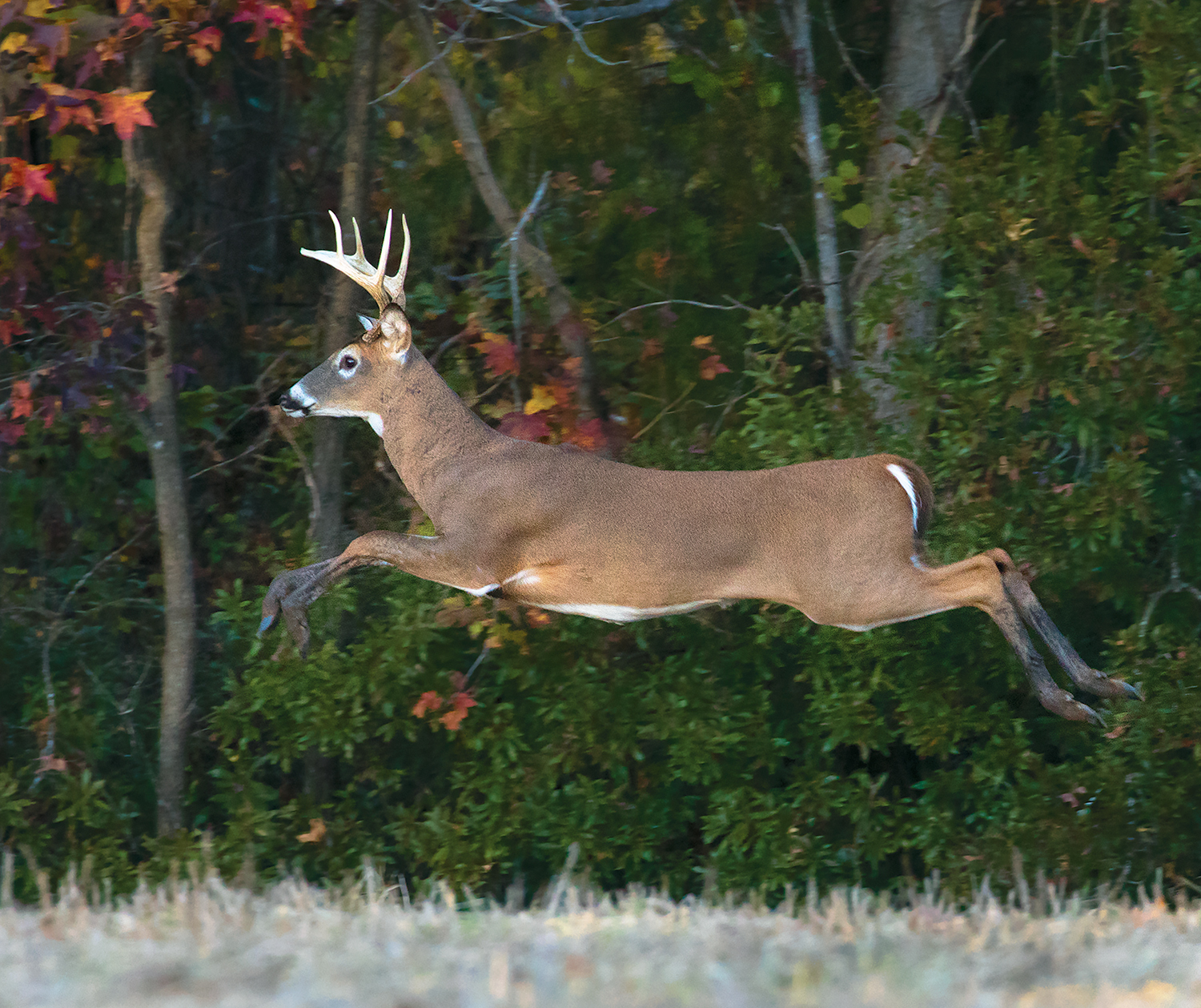 A deer in good condition tends to hold its antlers longer. Photo by Tig Tillinghast

Antler size is determined by three factors: age, nutrition, and genetics. Age is the simplest factor and also easy to manage. Simply put, as a buck gets older, his antlers get bigger. When a buck is 1 1/2 years of age and grows his first set of antlers, in Virginia on average he will have four points, a 16mm or 5/8-inch antler beam diameter (~ dime diameter), and just over an 8-inch outside spread.

Antler data from across the eastern United States clearly indicates that deer make significant increases in antler characteristics between 1 1/2 and 2 1/2 and again between 2 1/2 and 3 1/2, but then begin to plateau. If you pass up a yearling buck and he survives, the data indicates he will be significantly bigger next fall. The same “return on investment” logic applies to 2 1/2 year old bucks. It does not apply to 3 1/2 and older bucks. They will be bigger, but on average the increase in antler size will be fairly small. In free-ranging deer herds, it is very difficult to manage for deer 4 1/2 and older. A buck does not reach his maximum antler potential until he is 4 1/2 to 7 1/2 years of age.  After that, his antler size will begin to decline. These “over the hill” bucks represent less than 1/10 of one percent of the antlered bucks killed in Virginia in the last five years.

Nutrition is also simple; a deer has to have enough to eat to grow antlers. In overabundant deer herds, condition suffers, and antler characteristics can also be expected to be compromised. The best way to address deer overabundance is to kill more does and reduce the deer herd density. Typically, there is a direct inverse relationship between deer density and the physical condition of animals within a herd. As deer population density increases, overall herd condition and reproductive rates decline. Conversely, as deer population density decreases, health improves and reproductive rates rise. With all that said, feeding deer and putting out mineral licks will not make deer grow big gigantic antlers like the pictures on the bags because it cannot make them older. 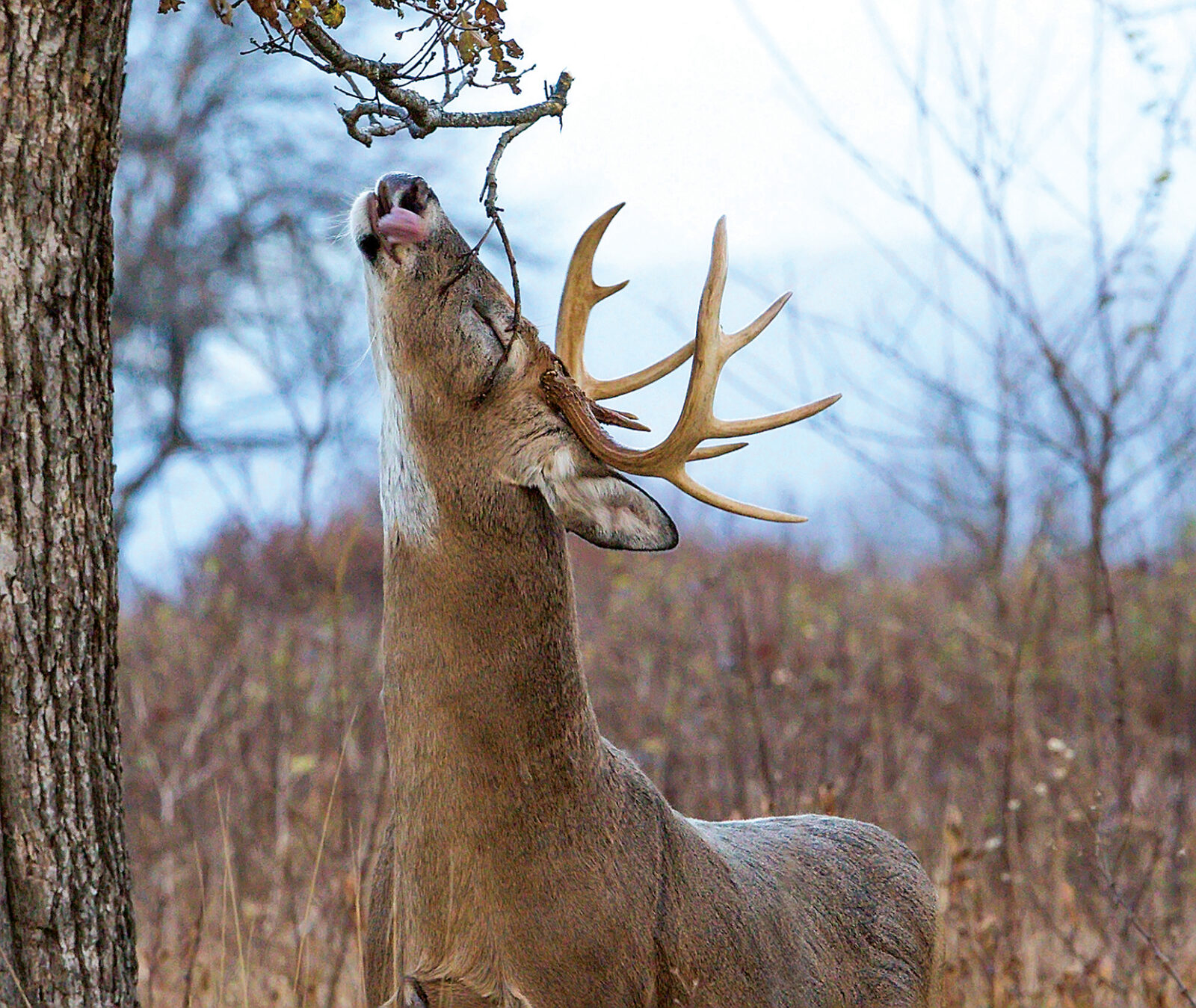 Genetics is not simple. For example, the old hunter’s tale that once a spike always a spike is not true, but that is not to say genetics does not play a role in deer antlers. Research done by the Texas Parks and Wildlife Department has proven that antler characteristics are inheritable (i.e., they can be passed from generation to generation), but it may be a moot point because when a hunter looks through a scope and sees a deer, he cannot see its genes. In free-ranging deer, managing antler genetics may not be possible. Hunters will often say, “Well, stock some of those big Illinois deer and let them breed!” First of all, how long would they survive? Maybe a day and, if they did survive, their “genetics” would not have any measureable impact. It would be akin to putting one drop of red food dye in the Pacific Ocean and expecting it to turn red. It would not work.

There are several unique antler facts that will surprise and interest most deer hunters. One of the most unique is the impact that an injury to the back leg of a buck has to subsequent antler development on the opposite site. For example, the next time you see a deer with a normal rack on the right and a twisted stunted rack on the left, check its back right leg for injury. For some reason, after a buck has a serious injury to a hind limb, it will cause the opposite antler to be abnormal and stunted. The cause for this is unknown, but it is more common than most deer hunters realize. This stunting effect will persist even after the hind leg heals.

A second unique male antler anomaly is a “cactus” buck. These bucks suffer from very low testosterone production due to hypogonadism or cryptochidism (i.e., their testicles are the size of a green pea or never descend from the body cavity). Because they never experience a fall surge of testosterone, the antlers are never shed. Each year new velvet and antler material is grown over and around the existing antler. Over time, this gives the antlers the look of a gnarly “cactus.” These bucks are not common, but a couple are reported killed in Virginia each year.

What about non-typical antlers? Well, the jury is still out, but there is probably a genetic component. As noted above, injury can cause abnormal antlers, but many of the anomalies commonly seen on deer antlers (e.g., drop tines, kicker points, abnormal tines, palmated antlers) are not caused by injury. Age is also a factor. Many typical antlered bucks begin to pick up abnormal antler characteristics such as kickers and beauty points about the burr as they get older. When they get really old, in their teens, their antlers typically look like small twisted bonsai trees.