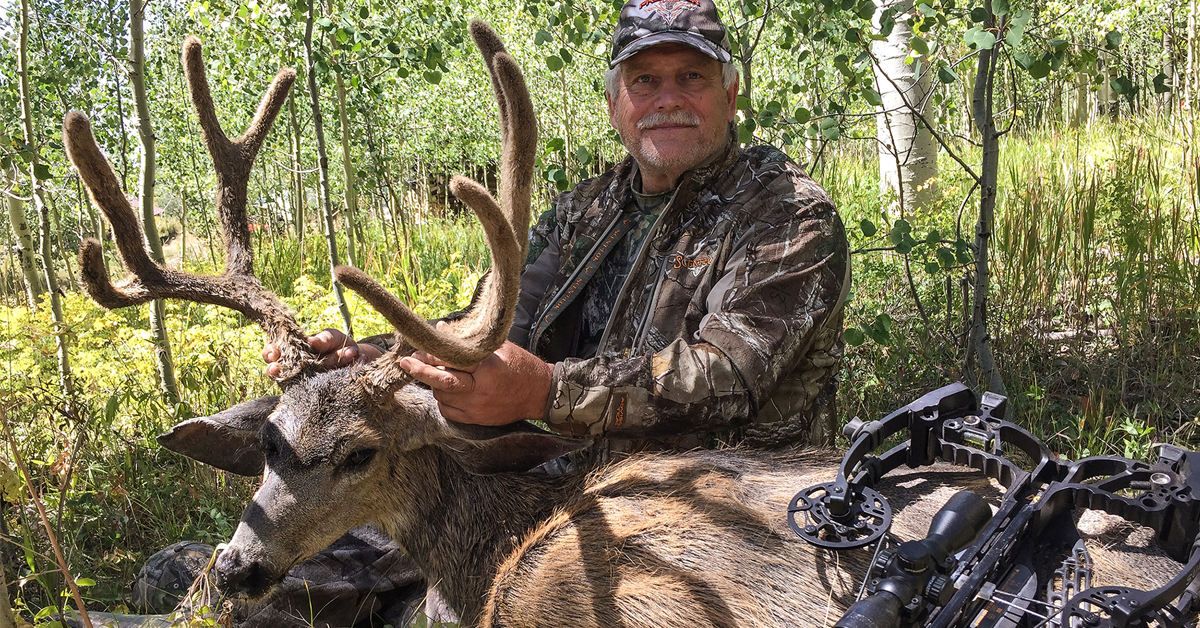 The modern-day era of archery equipment has come to the forefront to meet hunter demands for the future. Photo courtesy of Chuck Nease

Archery equipment and bowhunting have come a long way over the past 50 years. Today’s equipment and hunter education have taken bowhunting to a new level that’s finding hunters of all ages engaged!

In the early years, the only choices of equipment for bowhunters were longbows and recurves. It’s hard to believe we put a man on the moon before we put a wheel on a bow. Holless Allen’s patent on the first compound bow was the beginning of an equipment and participation advancement that continues today.

I must admit my age, because I was shooting and hunting with recurves in the ’50s and ’60s while growing up in southern West Virginia. In those days we were just as likely to see a UFO as a whitetail deer. Although the goal was difficult, we just wanted to find a deer and get close enough for a shot. We were more excited about hunting squirrels, rabbits and grouse than spending days looking for deer.

For my 14th birthday I was given a beautiful Bear Grizzly recurve with three fiberglass arrows with razor heads. That fall a friend shared a place he had found several deer tracks while squirrel hunting on Pinnacle Creek in West Virginia. I knew the area because my Dad had taken me trout fishing on that stream many times.

The next Saturday, I found several sets of tracks in the mud where three logging roads came together. I quickly set up in a cluster of rhododendrons 15 yards uphill and downwind from the crossing. After sitting in a soaking rain for hours, I heard the far-off sound of dogs barking.

I picked out a brown shape coming through the woods and onto the logging road. It was a nice buck and he was going to pass right in front of me. I remember taking a deep breath, drawing the bow, and watching the buck stop and look back at his pursuers. I released the string and was blinded by all the rain and spray that came from the camo bow socks, string, and arrow. After searching the area, I came to the realization I had missed. Still feeling the adrenaline from the encounter, I realized the challenge and thrill of archery and bowhunting would last a lifetime.

In the late ’60s and early ’70s there were many more target archers than bowhunters. Some of the best archers in the nation would gather and compete in Wytheville to decide the winner of the Virginia Open. Choices of equipment and competition were very limited in those days, but the compound bow was about to change everything.
In a span of 10 years target archers and bowhunters went from 100% traditional equipment to 90% compounds. The next 30 years saw growth of faster bows, better arrows, new companies, and increasing numbers of bowhunters and target archers.

The evolution was not easy, and change is sometimes difficult for individuals and groups to accept. Many states and clubs were reluctant to change laws and rules for the new bows and equipment. There are so many options for archers today that it’s hard to believe that compounds, release aids, and crossbows were against the law in many states and organizations. Our choice of equipment and long hunting seasons are credited to the hard work of individuals and our state and local archery clubs. We should always join and support them when possible.

Working in the archery industry has allowed me to meet, hunt and compete with some very special people in our sport. These individuals have set many goals and challenges throughout their careers. I would like to share some of their experiences and feelings about the challenges they love and pursue.

I met Joe Lakefield back in the late ’90s while competing in ASA 3-D competitions. Lakefield is a biologist for the Kentucky Department of Natural Resources and was involved with the first elk stocking in that state. I had the pleasure to shoot 3-D and elk hunt with him in Colorado. At that time, he made the podium at the Nationals and had taken several P&Y animals with his compound. Taking trophy bucks and gobblers every year was becoming the norm. 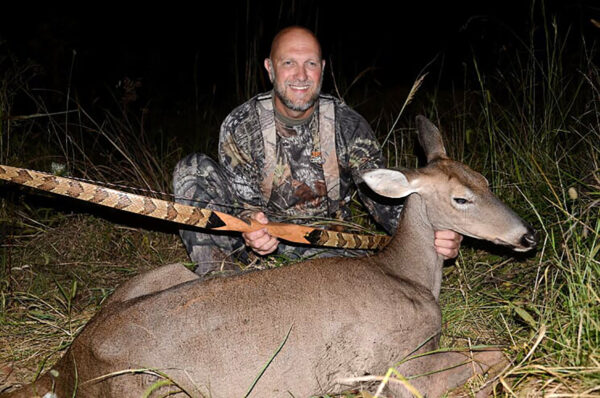 Joe Lakefield has taken many does and trophy bucks with recurve and long bows. He takes great pride and satisfaction in making his own bows to meet the challenge. Photo courtesy of Joe Lakefield

3-D Archery began in the ’80s and has continued to grow with more clubs and shooters every year. The national and world tournaments have acquired corporate sponsors and the best archers in the nation. 3-D competition is a great way to become a better archer and bowhunter. Over the last 40 years I’ve had the pleasure to meet and shoot with some very talented bowhunters and archers.

One of the best to ever pull a bow string is Jeff Hopkins. At age 9, Hopkins began bowhunting while growing up in the family farming and hunting business. He began shooting local 3-D tournaments in Delaware and Maryland in 1989. After winning all the local tournaments, he set his sights on becoming the very best pro 3-D shooter. Starting his pro career in 1989, he has won over 100 national and World Pro titles in ASA and the IBO tournaments.
Hopkins also won the coveted Vegas Top Pro title, out-shooting the best target archers from around the world. 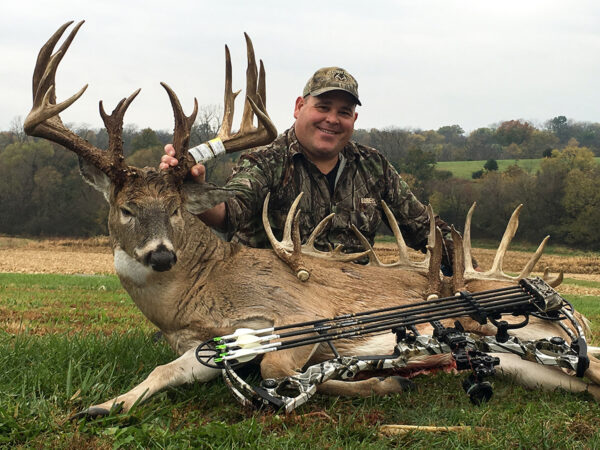 Jeff Hopkins has won over 100 national and world pro titles in ASA and IBO competitions. Hopkins sets his goals high and was determined to take a 200-inch whitetail with a compound. In 2016 he arrowed this 223-inch Iowa giant that made the grade. Photo courtesy of Jeff Hopkins

Hopkins’ work ethic and talent enabled him to represent and shoot for major archery companies throughout his career. His latest challenge was to take a 200-inch free ranging white-tail with his compound. His goal was accomplished in 2016 when he arrowed a 223-inch Iowa monster. Hopkins’ key to success: “Set your goals in steps you can accomplish and continue to challenge yourself and work to the next level. You will make it to the top if you don’t quit.”

Bowhunting has always been my passion—archery competitions and designing bows and accessories was just something to do between seasons. My shooting came to a sudden stop in 2018 when I experienced a total shoulder replacement in March. The thought of missing a year of competition and hunting with my compound was unacceptable, and to make matters worse I had just received my Colorado mule deer tag that took five years to obtain. My obstacles for the year were great, but it was possible to complete my therapy and recovery in five months.

By July I had regained 90% of my movement, but only 50% of my strength. I decided a crossbow may be my only option, and since West Virginia and all surrounding states had a season, it could work. I contacted Colorado Department of Natural Resources and explained my condition and they sent a special permit that would allow me to use a crossbow for my mule deer tag. After trying several models, I got it set up and shot at an ASA tournament two weeks before the hunt.

I quickly realized it took a whole new set of skills to hit a 2” 12 ring offhand at 40 yards. I knew I could shoot better with my compound, but I really enjoyed the competition and the great people I shot with. The mule deer hunt was a success, taking a nice buck with a 45-yard shot on the third day. My compound hunting buddies had a great week, taking two elk and a mule deer.

Returning home, my goal was to put some venison in the freezer and just enjoy deer hunting with my family and friends. Looking back over the years I realized the good ol’ days for archery and bowhunting are now. We have so many choices in where, what and how we shoot and hunt. The success of a hunt doesn’t depend on the size of the horns or the choice of gear we use.

A young hunter’s first deer should be enjoyed and celebrated the same as any trophy taken later in life. The challenges and success are in the eyes of the hunter. There’s no place in our sport for conflict and ridicule of hunters or hunting preferences. If it’s legal and ethical, it’s fine. We need all the hunters we can recruit and retain for our sport to continue for future generations. This year I’m going to hunt with a recurve, compound, and crossbow because I now enjoy the unique challenge of each one. In the future try something new, respect your fellow hunters, and have your best year ever.

Chuck Nease, who lives in Salt Rock, West Virginia, has been actively involved in archery competitions, bowhunting and designing archery equipment for over 45 years. Nease is a retired firefighter and US Army veteran. He has worked with several bow and archery companies throughout his career. Chuck’s love for bowhunting, competition and helping archers is still his passion. Readers are welcome to contact the author at Chucknease@yahoo.com with questions and comments.