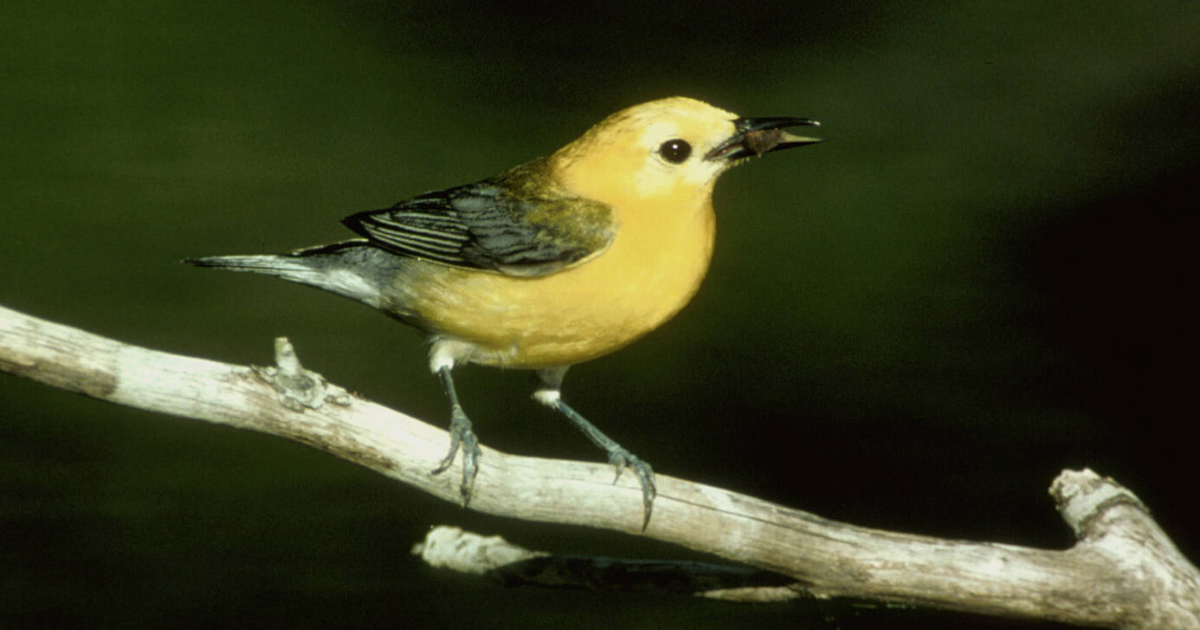 You can spot prothonotary warblers on this picturesque drive. Photo by Eugene Hester/USFWS Archive

During spring migration along the Atlantic Flyway, species heading for breeding grounds may follow the coastal plain and piedmont or they may cross the Appalachian Mountain Range on their northward journey. In the Mid-Atlantic, birds heading for the mountains first encounter the Blue Ridge mountain range that stretches from North Carolina into southern Pennsylvania. A large swath of the range covers southwest Virginia, and birders can enjoy following the 215-mile Blue Ridge Parkway along its spine in pursuit of colorful songbirds.

You won’t find a more productive and exciting spot along the scenic Blue Ridge than “Warbler Road” in the George Washington and Jefferson National Forests. Warbler Road is actually a route along several gravel forest roads with endpoints at the James River near the village of Arcadia located along Interstate 81, and Sunset Field Overlook on the Blue Ridge Parkway. Sunset Field, at milepost 78.4, is not far from the Peaks of Otter Lodge, a summer vacation playground with a small lake, hiking trails and campground.

The winding route through the mountains has earned a reputation over the years as one of the most reliable sites to find songbirds, especially more than two dozen species of warblers. Birders enjoy the ease with which targets can be spotted in the ravines and on hillsides from the roadway, often at eye level. Birders who also enjoy photography can often get unexpected and spectacular shots.

Whether you take the 14-mile Warbler Road route downhill from Sunset Field Overlook or uphill from Arcadia, either way you’ll find birds foraging and calling nearly all morning and afternoon, and end your day with an impressive and very satisfying list of species.

The ascent from the river bottom to the Blue Ridge Parkway is nearly 1,600 feet along a narrow track with numerous switchbacks that cross several creeks. Warbler Road is very popular among birders from not only Virginia but also West Virginia and North Carolina. From late April through May, you’re apt to encounter slow traffic and distracted roadside strollers with upturned binoculars.

For two reasons, I prefer starting at the river bottomland at the bridge over the James River (east of Arcadia on Arcadia Road/Route 614) and slowly working up the mountainside. First, in early May it’s often chillier and windier as you move up in elevation, so you can take advantage of the sun’s warmth by heading to the top when the temperature is rising.  Secondly, birding is often better along the bottomland early in the morning; the higher altitude species will generally still be singing and actively foraging when you near the top.

Just at daybreak, as you stand by the James River Bridge at the edge of the national forest, you’ll first hear the songs of the field, white-throated and song sparrows. Soon there’s a symphony of birdsongs as the sun’s first rays bathe the surrounding fields. The songs of Baltimore and orchard orioles fill the air as the birds chase each other from tree to tree.

On the opposite side of the road, below in the bottomland fields, yellow-breasted chats cackle in the tangles, prairie warblers call, and indigo buntings and blue grosbeaks streak back and forth along the field edges. You’ll be amazed at the number and variety of birds that you’ll see and hear along both sides of the road before heading into the higher elevations.

After driving away from the James River, within a half-mile you’ll encounter a bridge that crosses Jennings Creek and leads to a railroad track. Plan to spend some time along this short stretch where you’ll often hear and see Baltimore and orchard orioles, scarlet tanagers and a variety of warblers. With a little patience, you’re apt to find red-eyed, white-eyed, blue-headed and warbling vireos.  Watch for belted kingfishers that ply the stream banks. 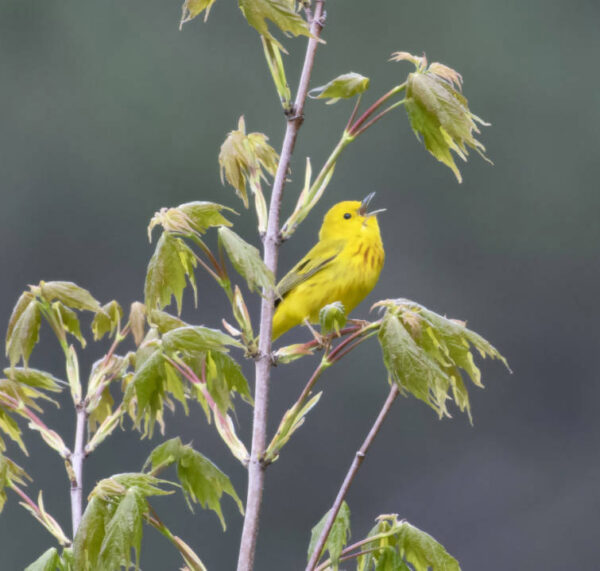 Beyond the railroad track and an old county store, watch for a left turn onto Solitude Road over North Creek, a narrow lane that leads to a roadside marsh within three miles. The marshy wetlands will be your best shot at finding a black-billed cuckoo, and perhaps a yellow-billed cuckoo as well. Prothonotary and yellow warblers are common here and you’re likely to see blue grosbeaks and indigo buntings in the fields alongside the road. When finished, backtrack to Arcadia Road.

Continuing along Arcadia Road, within a mile you’ll see signage for North Creek Campground and a left turn onto the gravel road will lead uphill to one of the best sites on Warbler Road. The campground and the surrounding area are best explored on foot, including the creek and woods across from the campground and both sides of the roadway beyond the campground. This the most reliable spot for Louisiana waterthrushes, and you’ll most likely find ovenbirds, as well as hooded and black-throated green warblers.

Driving uphill from the campground, you’ll soon enter a twisting and narrow roadway with switchbacks that cross small creeks and gorges, often giving you unexpected views of songbirds at eyelevel. The warblers you are used to straining to glimpse in the forest canopy will often be easily spotted on low-hanging branches or downhill treetops. Along this middle section of the route, listen and watch for ovenbirds, thrushes, and worm-eating, black-throated blue and magnolia warblers.  You’re likely to also find many blue grosbeaks and indigo buntings along the way. 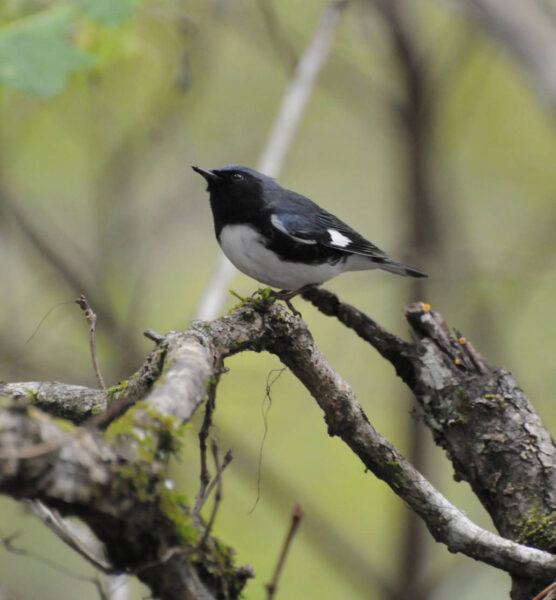 Along the final few miles, you’ll likely hear not only similar-sounding black-throated blue and cerulean warblers, but also many other warbler species: blackpoll, blackburnian, chestnut-sided, hooded, black-and-white, worm-eating, Cape May and Kentucky, as well as American redstarts and yellow-breasted chats.

Before reaching the top at Sunset Field Overlook on the Blue Ridge Parkway, watch for a gravel road on the left that leads to a distant radio tower. Turn onto the gravel road and park along any of the wide spots. It’s possible to drive this track a half-mile, but the road is gated ahead with a very tight turnaround. You’ll certainly enjoy birding this gentle grade on foot; the birdlife is very active.

The tower track is a reliable site for a number of species you may not have found at lower elevations, such as wood thrushes and Swainson’s thrushes, veery, and rose-breasted grosbeak. You’ll find Canada warblers, often a difficult species to spot, singing on territory around several clusters of very large boulders shortly before reaching the closed gate. You’re also likely to find dark-eyed juncos, a common winter feeder bird along Virginia’s coastal plain before leaving for mountain breeding grounds, foraging along the road edges.

At the Sunset Field Overlook, the upper terminus of Warbler Road, birding can be very lively, too.  Searching the treetops may bring you warbling vireos, a rose-breasted grosbeak, scarlet tanager or American redstart.  In the brushy field below, indigo buntings often sing and a yellow-breasted chat may surprise you with a fluttering display nearby.

If you follow the Parkway north of Sunset Field roughly 15 miles, you’ll find the James River Visitor Center where the Parkway crosses the historic river.  You can descend a staircase to the river where a fascinating exhibit highlights the locks where flatboat bateaus skirted rapids long before freight trains replaced them after the Civil War.

The visitor center is also an access point for a trail that follows Otter Creek for several miles upstream, often a very lively warbler thoroughfare.  The brushy banks and thick canopy are magnets for songbirds.

When you end your Warbler Road adventure you’ll have a long list of sightings, and it will certainly include many dazzling warblers prized by birders.

Remember, this is the last year of the Virginia Breeding Bird Atlas! Find you how you can participate and enter your observations on the VABBA eBird site. 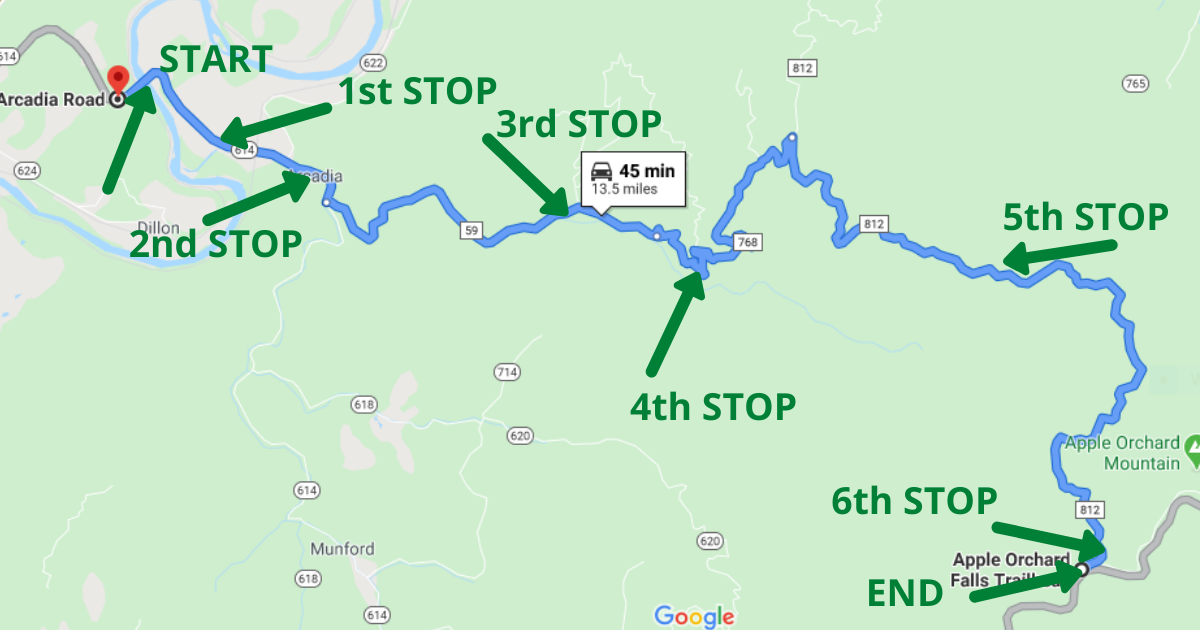