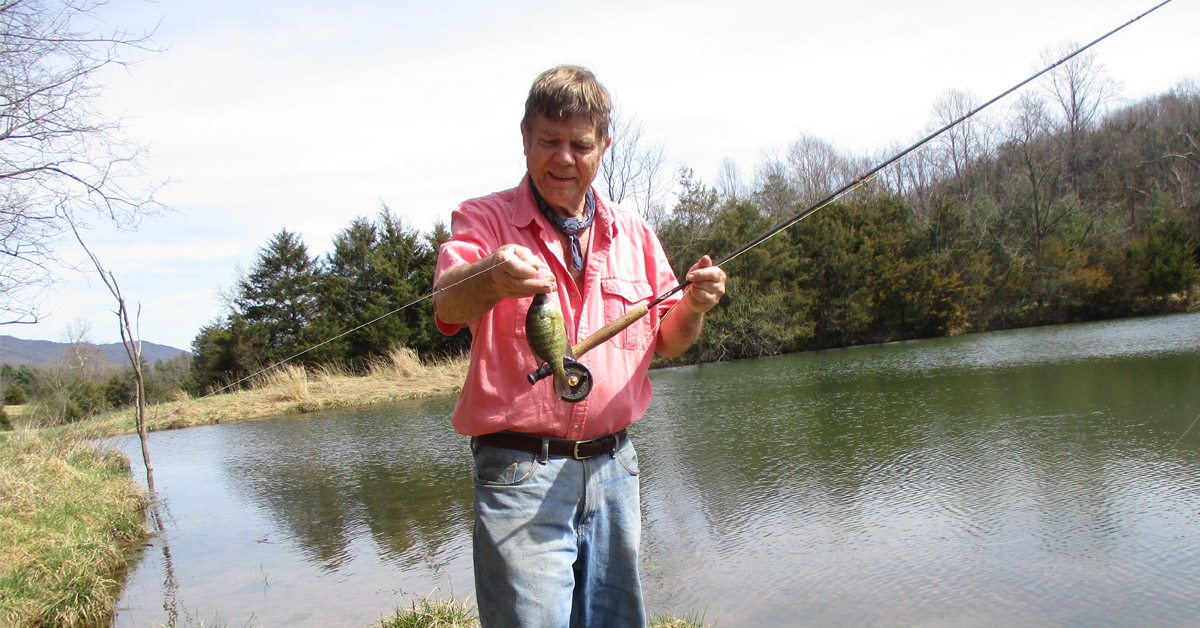 The ultralight rod bucked wildly as an unseen quarry surged through the weed-filled water in powerful runs. When I looked towards the back of the boat, both my angling companions were busy fighting and landing their own finned adversaries. Before the day would end, we would battle over 100 fish.

No, our quarry that day on a pond in central Virginia was the humble bluegill—the most popular gamefish in America and a favorite of many Old Dominion anglers.

For sheer fishing fun and fast action on the water, it’s hard to top an outing for bluegills. For this article, let’s also throw in the closely related redear (shellcracker) and pumpkinseed. These sunfish can be found in ponds and lakes, rivers and streams throughout Virginia. They are also fairly easy to catch, keeping newcomers to the sport’s interest up and making them great target fish for family outings or introducing a novice to fishing. One of the most appealing traits of bluegills is they are a great quarry for all three major angling methods—live bait fishing, casting lures, and fly fishing.

Lots of times a trip for these feisty panfish will mean bait fishing. For fast and furious action, you can’t go wrong with a garden worm, red wriggler, or cricket on a small fine-wire hook.

These brightly colored sunfish are also superb targets for the fly fisherman, readily snatching sponge rubber spiders off the top and wet flies and nymphs slow-crawled beneath the surface.

But bluegills and their kin are also great fish for the angler tossing ultralight lures. We’ll delve into more details on all of these methods for catching Virginia’s most colorful panfish, but let’s start with artificials.

When choosing lures for sunfish, one of the most important ingredients is compactness. With tiny mouths, a bluegill simply cannot get its lips around a large morsel of food or big lure. The fish know this and will seldom strike large, cumbersome offerings.

But when that requirement of compactness is met, these pugnacious gamefish will attack a wide variety of artificials. Some days they’ll nab a spinner flashing through their weedy lair. Other times they’ll wallop a subtle grub slinking past a sunken log or a small Beetle Spin cast into a placid cove. Here are some of the top lure choices for sunfish and how to fish them.

For the lure, a good choice is a thin plastic worm in the two to four-inch range with pre-rigged hooks, or a single exposed hook. Another option is a small grub, hooked lightly through the head, just 1/8 inch in from the tip, on a size 6 to 10 short-shank bait hook. Having the lure separated from the sinker and fluttering almost weightlessly behind it makes this setup especially appealing to fish on heavily-pressured waters and clear lakes. But be forewarned—you might latch onto an 8-pound bass with this just as likely as an 8-ounce bluegill!

For your tackle, a 5 ½ to 6 ½-foot light action rod coupled with an open-faced spinning reel with a smooth drag and 4- to 6-pound line is perfect for almost all bluegill lure fishing. Some “ultralight” rods work, but make sure they don’t have an action that’s too soft, making it hard to set the hook.

In some cases, you can also use a cane pole or fly rod effectively to simply reach out and flip grubs, spoons, and spinnerbaits next to cover and tussle with your quarry up close. Both of these types of tackle also work well for bait fishing.

With their diminutive mouths and preference for feeding on insects, bluegills are a terrific quarry for the fly fisherman. Spring is one of the best times of year to use this type of tackle because the fish well be moving into shallow areas to feed and prepare beds for spawning. 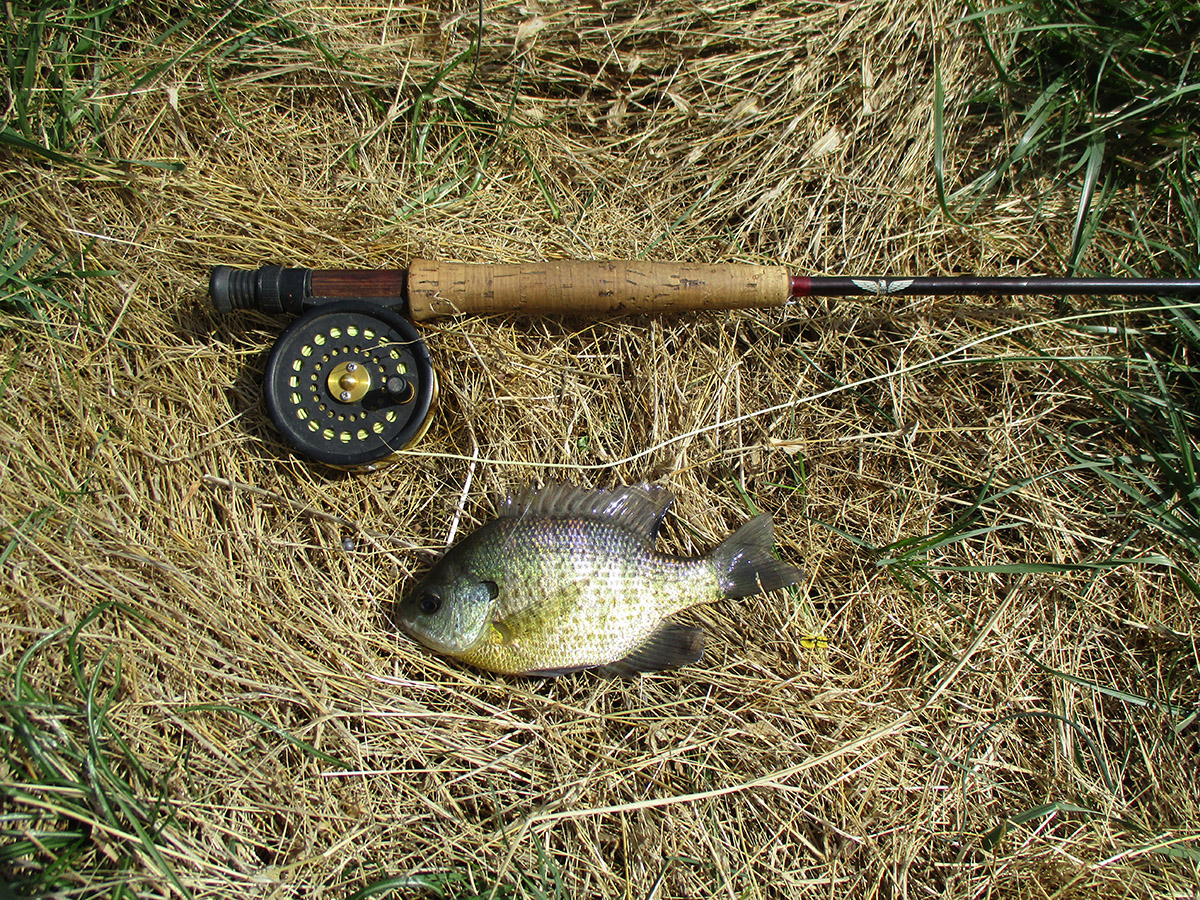 The overwhelming choice among bluegill fly anglers is the sponge rubber spider with white rubber-band legs. Good colors are black, green, red and brown. Also stock a few terrestrial patterns from your trout vest such as large ants, crickets, beetles and grasshopper flies. If fish are not eager to feed on top, crimp a split shot a foot or two ahead of the rubber spiders so they sink slowly. You can also tie some with weight on the hook shank. A few wet fly and nymph patterns such as the Wooly Worm, Hare’s Ear and Pheasant Tail are also good, with sizes 8 to 14 best.

Try to spot fish on spawning beds with polarizing sunglasses. If you can’t locate beds, cast to cover such as stumps, weed edges, and dock pilings. Allow the topwater offerings to rest after casting them to a bed or cover, then 20 to 30 seconds later, give them a slight twitch. Sub-surface patterns produce best with 4- to 8-inch strips or a slow-crawl presentation.

Chances are more bluegills are caught by anglers using bait than any other method. There’s little wonder why. Show a ‘gill a wriggling worm or succulent cricket and a bite is almost guaranteed.

Bait also offers a great way to introduce youngsters and newcomers to angling. Light or ultralight spin tackle, a fly rod with a reel spooled with monofilament, or a simple cane pole can all be effective for delivering a tempting morsel. Use the long fly rods or cane poles when you can approach close to the cover or spawning beds you are targeting and flip the offering towards the quarry. Otherwise use spin gear.

A bobber positioned anywhere from 2 to 5 feet above a size 6 to 8 bait hook is helpful for suspending the offering. Add a small split shot a foot above the hook. Red wrigglers or garden worms are excellent choices, but crickets may be the best bluegill bait of all. A piece of nightcrawler also draws steady action.

It may seem like an old-fashioned fishing tactic in our modern high-tech world, but watching a bobber disappear as a bull bluegill races away with your offering is a thrill no angler is too old—or too young—to enjoy!