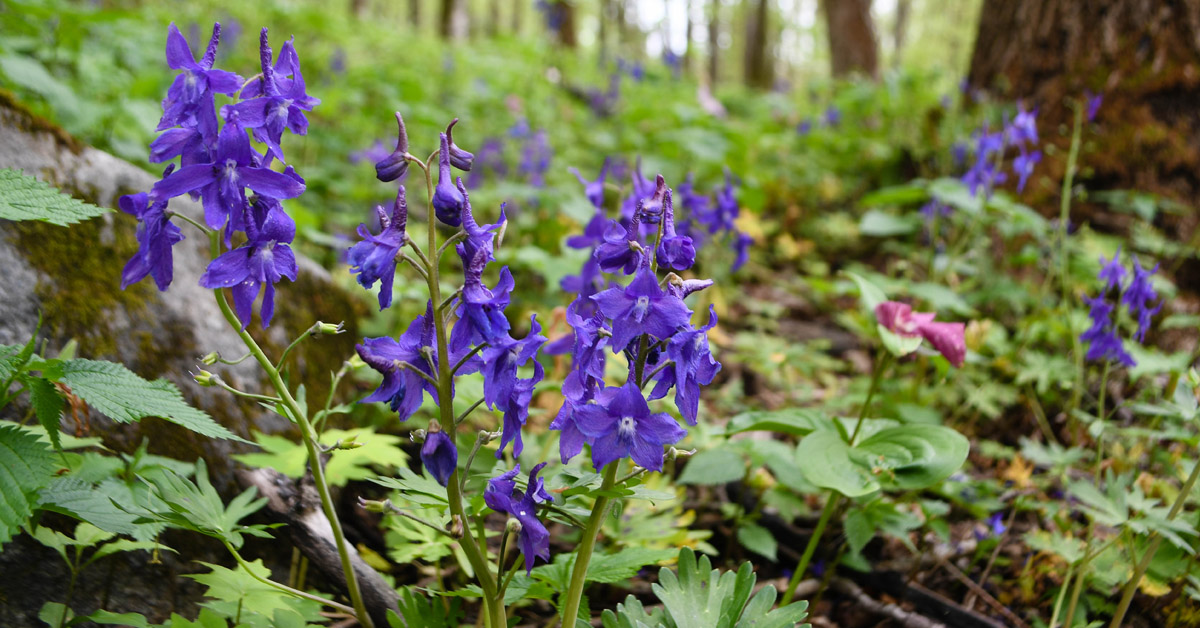 Tucked away in a quiet corner of southwest Virginia, the Virginia Department of Wildlife Resources’ (DWR) second-largest Wildlife Management Area, Clinch Mountain WMA, sprawls over 25,477 acres in Washington, Smyth, Russell, and Tazewell Counties. Within its vast expanse, the WMA offers multiple trout streams, a high-elevation lake, a gun range, and a plethora of hunting opportunity. More than that, and of note to naturalists and botany enthusiast, every spring, the mountain landscape explodes into a mosaic of pastels, attracting naturalists from all over. Trout lilies, bluebells, trillium, blue-eyed Maries, fire pink, lady slippers, Solomon’s seal, and a host of other spring ephemerals blanket the mountain drained by the gushing Big Tumbling Creek, and the view is not to be missed.

Clinch Mountain WMA is dominated by steep mountains and rugged peaks of Clinch Mountain, a 150-mile long ridge that spans the distance between Kitts Point near Blaine, Tennessee and Garden Mountain near Burke’s Garden, Virginia through the Ridge and Valley region of the Old Dominion. The Mountain is named for the Clinch River, which flows southwestward towards Tennessee in the valley to its west. The WMA sits on the very northeastern extent of the range, at the very top of the upper Tennessee River watershed. 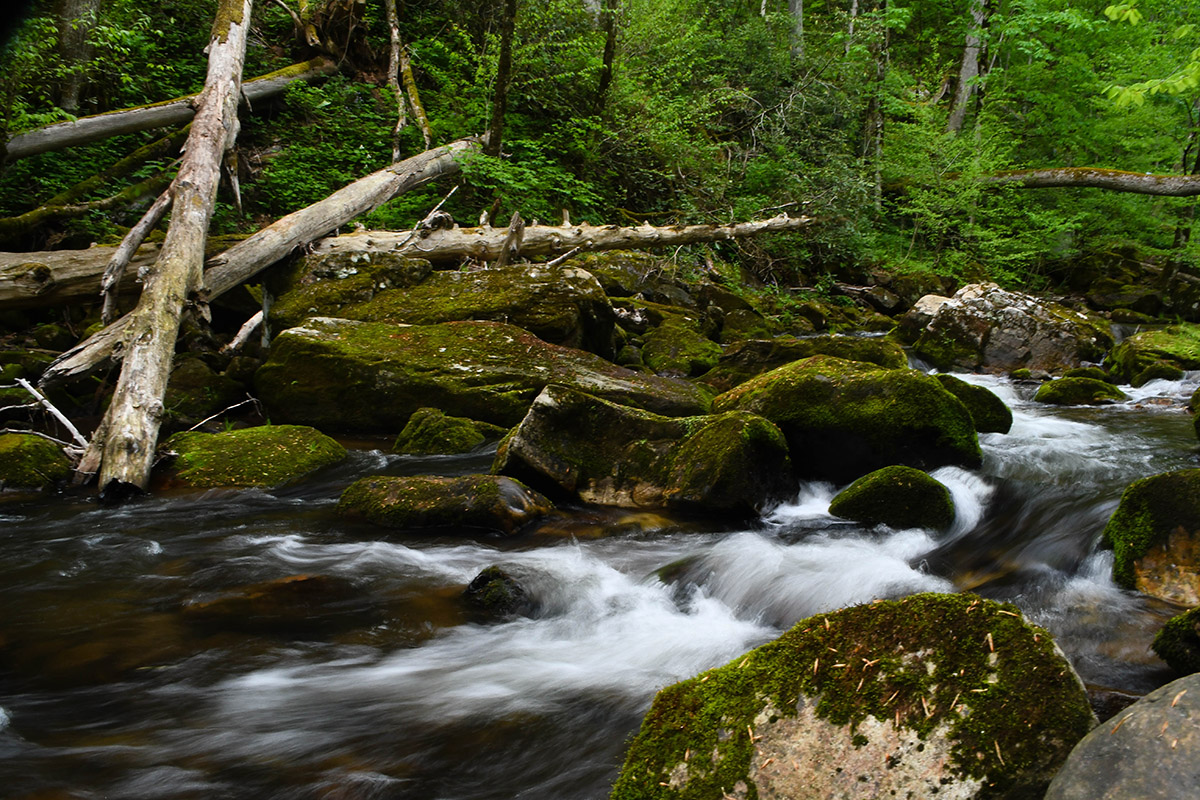 Big Tumbling Creek is a centerpiece of Clinch Mountain WMA and a picturesque backdrop for spring wildflowers.

The difference in elevation throughout the property is significant, ranging from a mere 1,600 feet near the foot of the mountain to nearly 4,700 feet at the peak of Beartown Mountain—Virginia’s seventh highest peak. This fact, along with the several streams that drain the area and active burning and logging aimed at managing habitat, creates a rich array of habitat types, which support a wide range of both northern and southern species, and earn the WMA the designation of Virginia’s most biologically diverse WMA.

The route most commonly traveled through the WMA begins near Allison Gap via Poor Valley Road, and travels upstream along Big Tumbling Creek toward Laurel Bed Lake. The bordering ridges and creek bottom create a shady, deciduous forest of rich, mesic soil that is incredibly lush and can take some time to sort through. 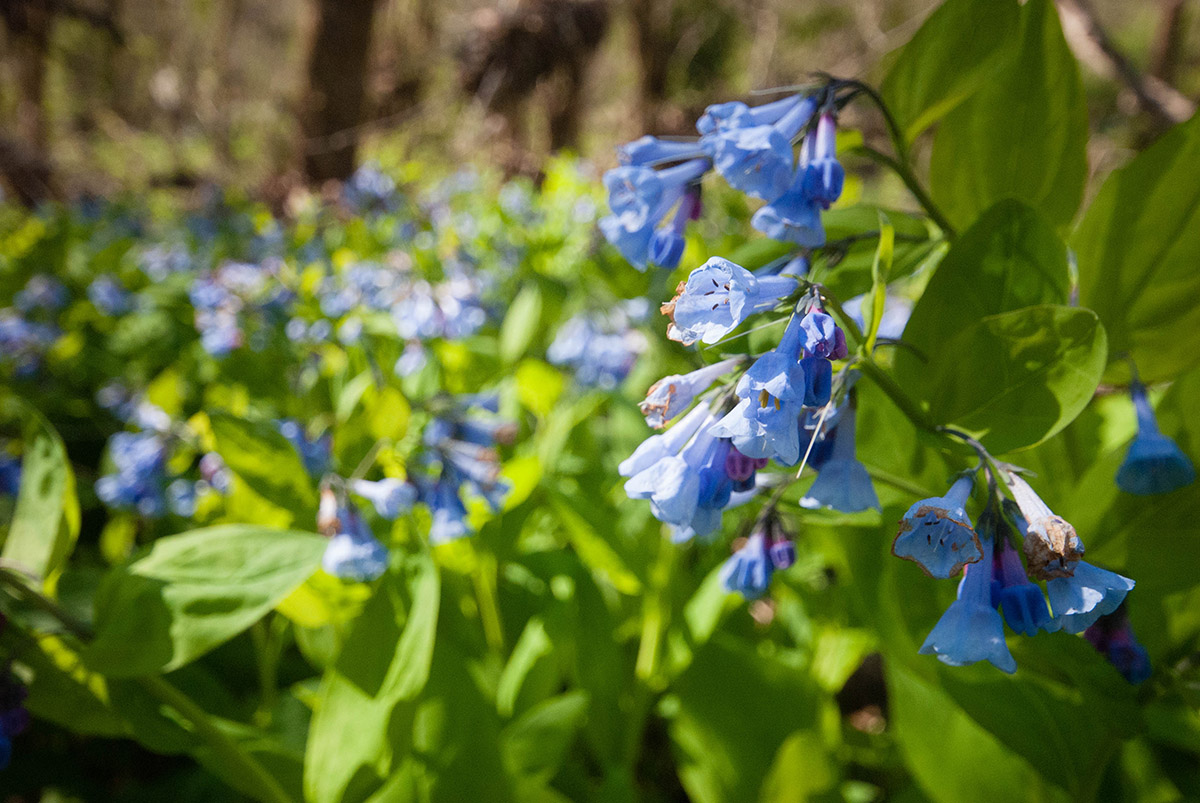 Virginia bluebells put on quite the springtime show in river bottoms across the state in late March and April.

Purple phacelia (Phacelia bipinnatifida) and wild geranium (Geranium maculatum) add additional splashes of purple to the landscape in force in the creek bottoms. The two species resemble each other from a distance, or to the untrained eye, but closer inspection resolves the confusion. Phacelia flowers are cup-like and, though five-lobed, are not as deeply lobed as the geranium. Geranium are easily distinguished by their five- or six-parted, deeply lobed leaves, while phacelia sports toothed leaves made up of five pinnately arranged leaflets. Golden ragwort (Packera aurea) interjects a bright show of contrast. 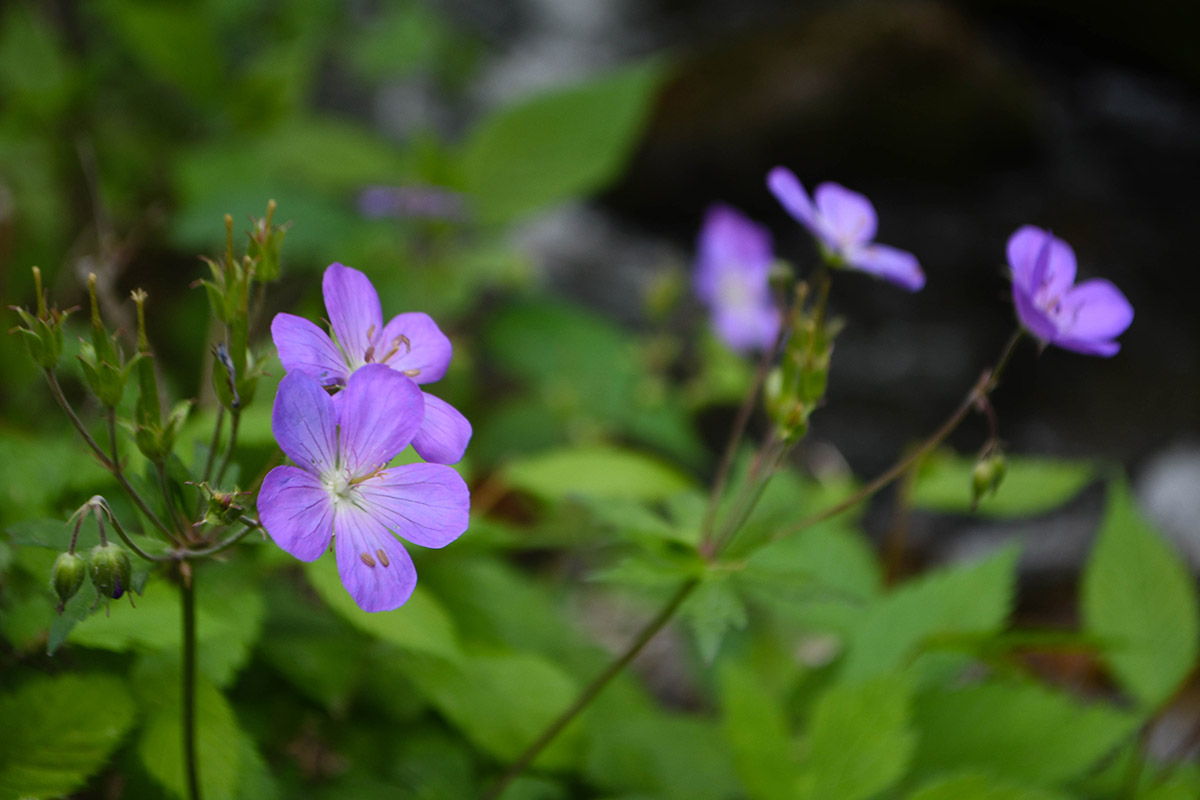 Wild geranium is best distinguished from purple phacelia by its deeply lobed petals and its five- or six-parted, deeply lobed leaves. 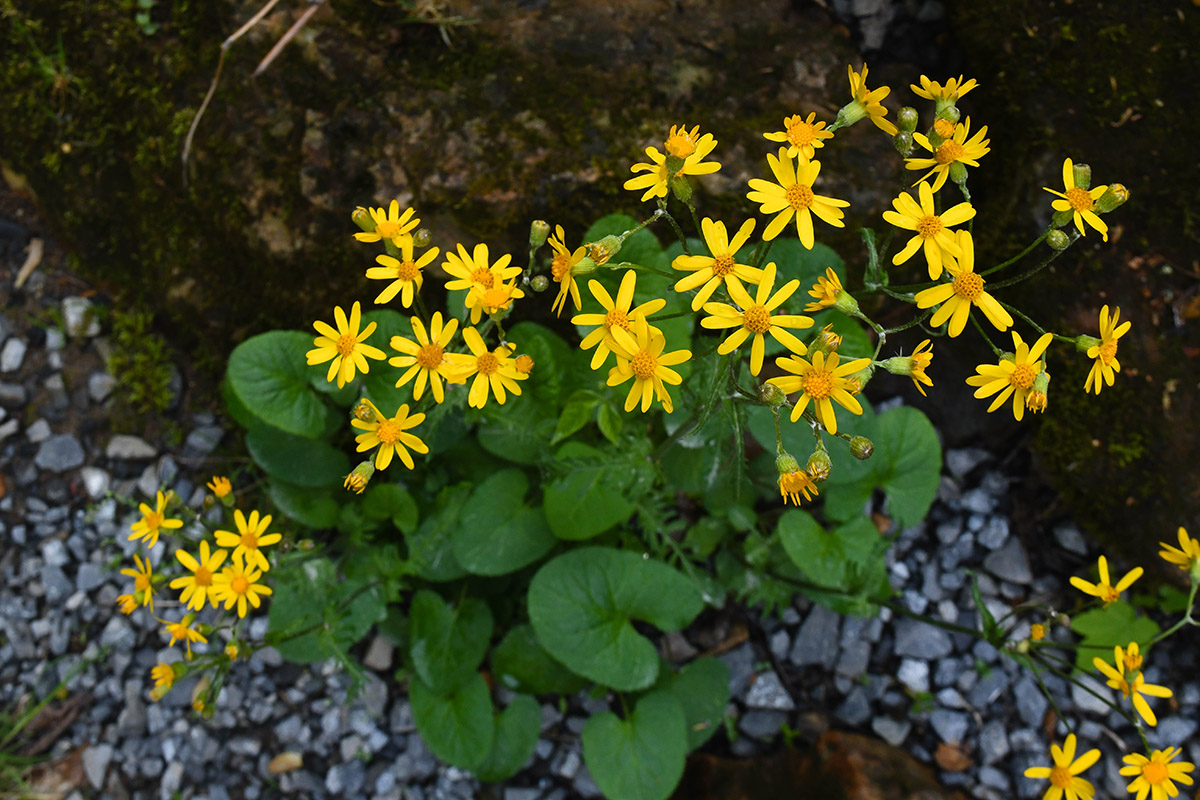 Golden ragwort is a common sight along the mountain roads of Clinch Mountain WMA in the spring.

Not all spring-blooming flowers are spectacularly showy, however. Wild ginger (Asarum canadense) is easily missed, but dramatic in character. Its broad, heart-shaped leaves grow in pairs and give them away easily. Its flower hides below, in the leaf litter. The brownish-green hue of the fleshy flowers evolved to imitate the appearance of the thawing carcass of an animal that didn’t make it through the winter, attracting small pollinating flies and gnats. 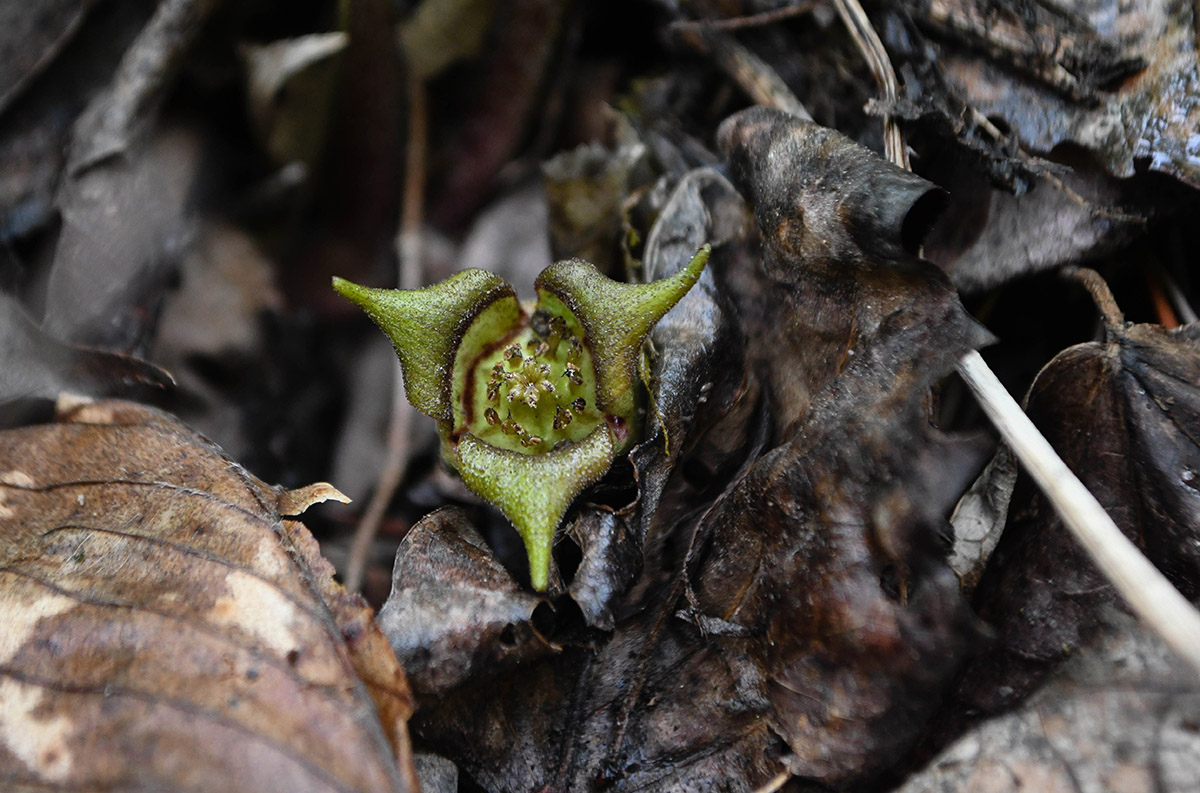 Wild ginger is easy to miss, but its flower has an interesting adaptation.

The flowers of the mayapple (Podophyllum peltatum) hide, too, below a conspicuous, umbrella-shaped leaf complex. Mayapple thrives in damp, open understories, and along the borders of burned-over areas within the WMA. They colonize via rhizomes, and thus form dense clusters. The white, apple blossomesque flower that emerges under cover of the leaves in the month of May is its namesake.

Paying special attention to the copious rock outcroppings and cliffs that line the access roads in Clinch Mountain will reveal another often-missed species. Woodland stonecrop (Sedum ternatum) is a succulent in the family Crassulaceae, which includes about 1,500 species, many of which are cultivated as ornamental, novelty plants for homes and offices. Our native stonecrop sports small, green, waxy leaves and white, five-pointed flowers, and consumes many rock features within the WMA.

More small, white details mark the rugged terrain in the form of heartleaf foamflower (Tiarella cordifolia) and Canada violets (Viola canadensis). The former is named for the foamy appearance of its many tiny, star-shaped flowers that grow in racemes. The violet is striking. White petals surround a yellow center, and a tinge of purple adorns the backsides of the flowers.

Further up the mountain, carpeting the creekbottom, blue-eyed Maries (Collinsia verna) can overwhelm the eye. Strikingly blue, the two-lipped, blue and white flowers grow in whorls of four to six. In similar habitat—wet and shady—fringed phacelia (Phacelia fimbriata) grows so dense as to suggest recent snowfall. Named for their fringed petals, fringed phacelia is more delicate than purple phacelia, and rarely occurs below 3,500 feet above sea level. 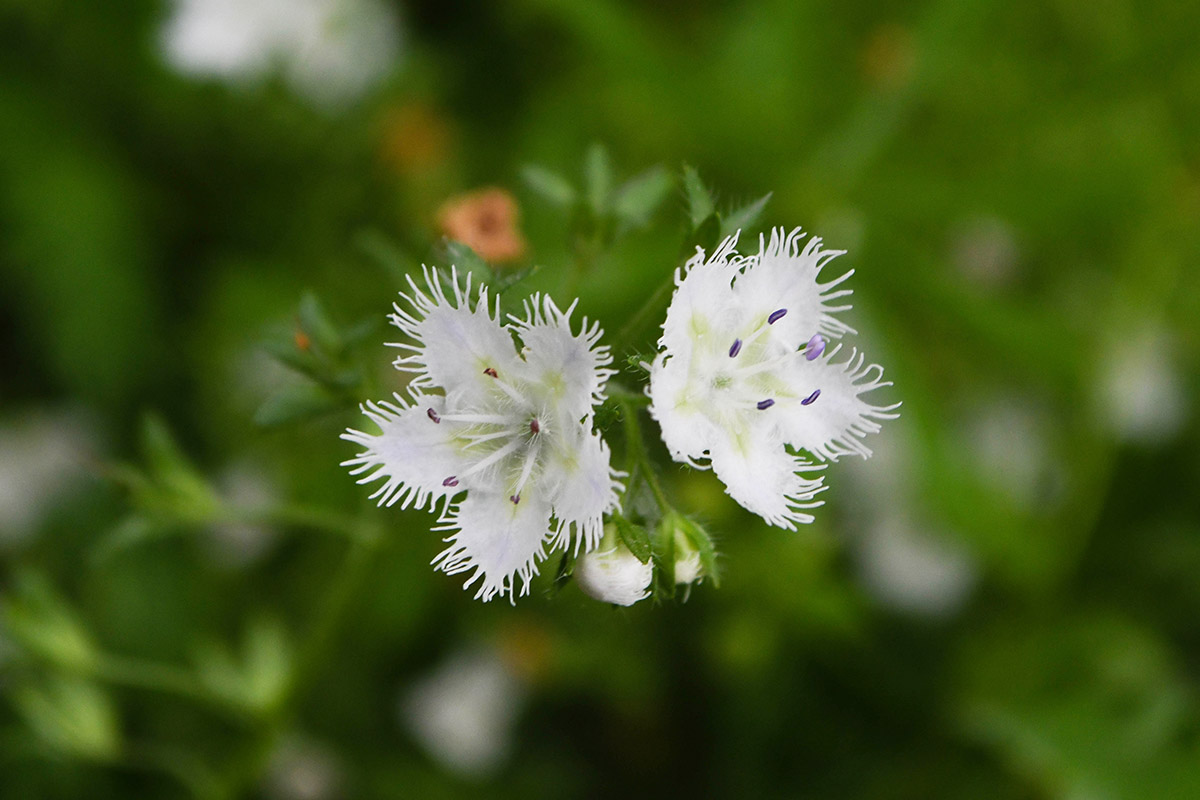 Fringed phacelia is a much more delicate plant than purple phacelia, but grows in masses, often giving the appearance of spotty snow cover.

The hardwood saddles and well-drained slopes show a different assemblage of species. Great white trillium (Trillium grandiflorum), with their three massive petals, some bright white, some pink (fading with age) spread as far as the eye can see, battled only by the loud, deep purple of dwarf larkspur (Delphinium tricorne).

Trout lilies (Erythronium americanum) have a fashion all their own. Though small, their bright yellow flowers attract a wandering eye, which will inevitably come to admire the brown-mottled, deep green, waxy leaves that give a nod to the dorsal camouflage of a brook trout, giving the flower its name. 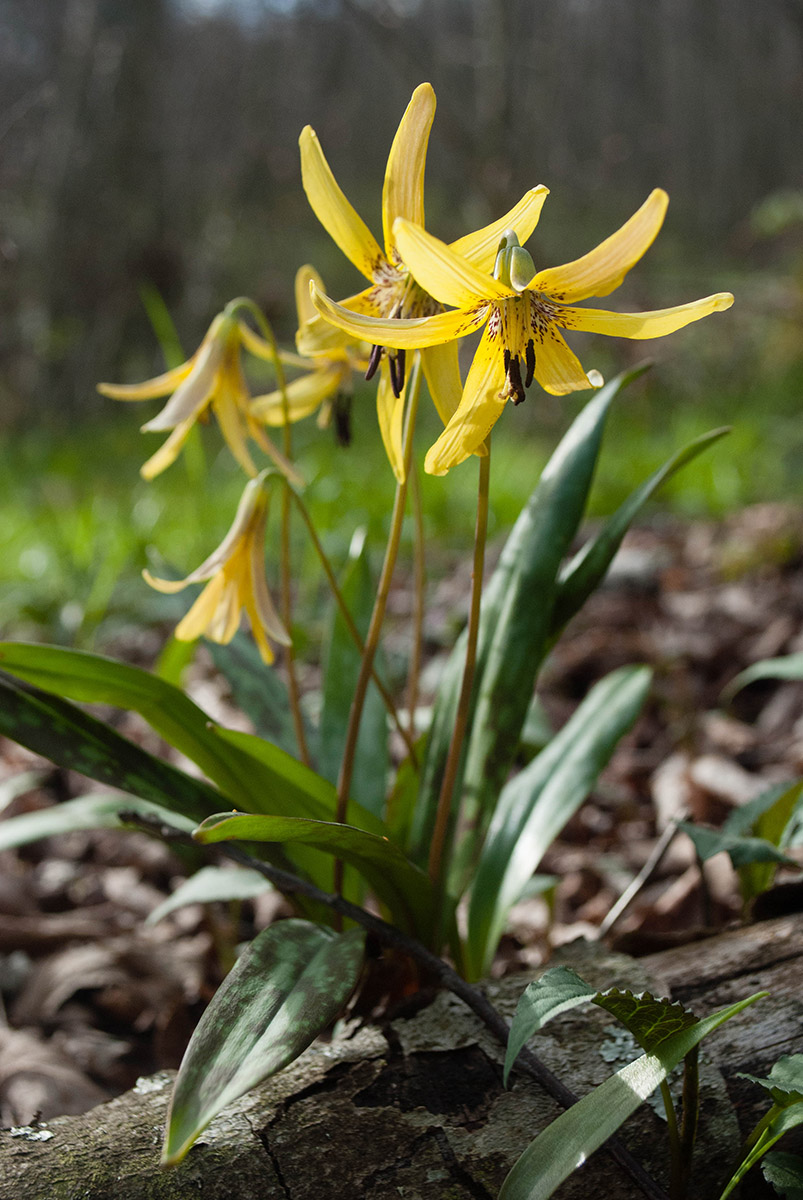 Trout lilies, though best recognized by their yellow flowers, are named for the brown mottling on their leaves that mirrors that of a brook trout’s dorsal camouflage.

Spring is a season too short, not only for all the sporting opportunities, but also for the short-lived botanical beauty that is readily available to those who are willing to take the time to take a closer look. Clinch Mountain WMA is rich with such opportunity.