Although they are found state-wide, coyotes are a relative new-comer to Virginia.  Coyotes are native to the plains of the Midwest, but they eventually arrived in the western mountains of Virginia during the late 1970’s following a well-documented eastward expansion.  Coyotes prefer hilly terrain with open or brushy habitat, but they are also a highly adaptable species. Their numbers quickly increased and coyotes soon became firmly established in every county of the Commonwealth. 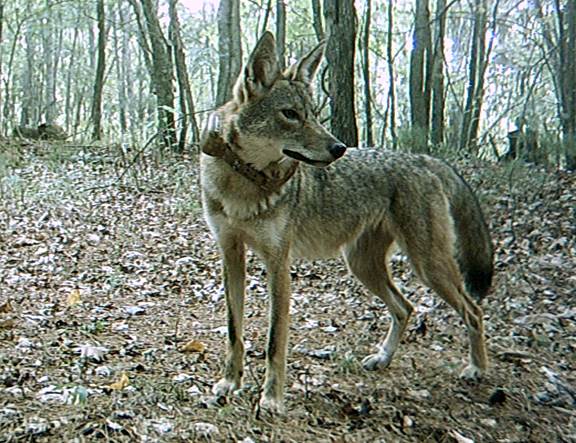 Coyote wearing a GPS radio collar as part of the research study.

Soon after the coyote’s arrival, many hunters and wildlife enthusiasts began to express apprehension regarding the potential impacts coyotes might have on our native wildlife species.  In particular, deer hunters voiced concerns that increasing coyote numbers might lower deer populations in portions of the state.

In order to better understand the potential effects of coyotes on deer numbers, the Virginia Department  of Game & Inland Fisheries embarked upon a 4-year research project in the western mountain region of the state.  The study was headed up by researchers at Virginia Tech and initiated in 2011.  The project was focused on National Forest lands in Bath and western Rockingham County, where deer numbers appeared to have declined substantially during the past decade.  Primary objectives of the project included an assessment of what coyotes eat throughout the year, their movement behavior, habitat selection, and home range size. The diet of bobcats and bears were also studied in the same area and compared with coyotes.

To study the diet of coyotes, researchers meticulously examined 395 coyote scats (feces samples) collected monthly over a 2-year period.  They found out that coyotes eat deer very frequently.  White-tailed deer had the highest overall occurrence in the scat (74%), followed by voles (27%) and insects (16%).  Seasonally, deer occurrence in the scats was greatest in January, March, June, July, and November.  The June-July period coincides with the fawning season but deer were also an important food item during the early fall and late-winter months. 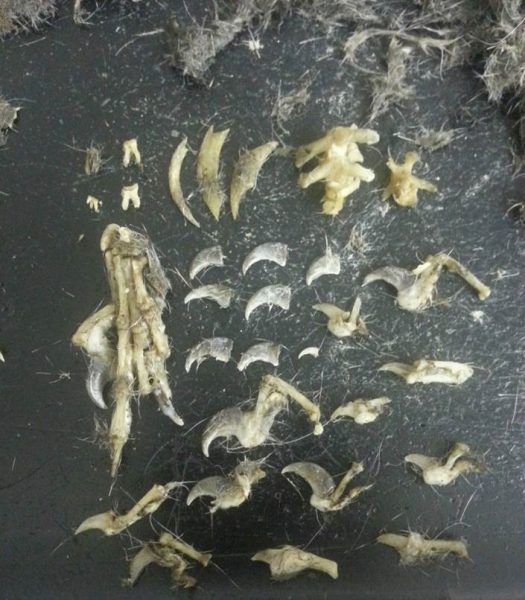 Although we now know that coyotes eat deer a lot, we don’t know if they eat a lot of deer.   Scat analyses tell us what an animal has eaten, but not how the food item was obtained.  As a result, it’s unknown whether the source of deer in the coyote diet was from deer actually killed by coyotes or whether coyotes were scavenging on carcasses of deer that died from other causes.  Most likely, both sources were important diet components, but additional research (currently underway) will be needed to quantify the contribution of each source.

Coyotes were not the only predators eating deer in the study areas.  Of the 607 bobcat scats analyzed, deer were found in 35% and squirrels were found in 53%.  Seasonally, deer was highest in the scats during June (when most fawns are born) and in late winter (December and January).   Bears also had a high occurrence of deer in their scat (35%), but acorns and berries were found in 61% and insects were found in 45%.

In addition to studying what coyotes were eating, researchers also monitored the movements and survival of 19 coyotes wearing high-tech GPS radio collars.  They found that coyotes in the western mountains formed a mosaic of stable and shifting home ranges that were significantly impacted by high mortality, primarily from shooting and trapping.  Some coyotes lived in loose family groups and occupied well-defined territories. 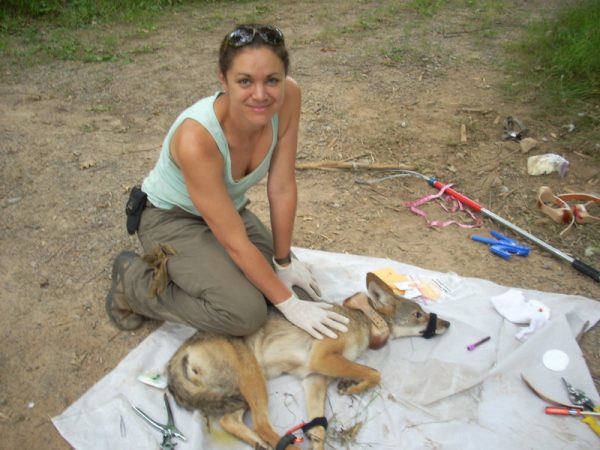 Application of a GPS radio-collar on a coyote.

Others were lone individuals classified as “transients” with large home ranges situated between defended territories, referred to as “biding areas.”   These nomadic coyotes were basically lying in wait to fill vacant territories.  Since mortality of coyotes was high (63% of radio-collared coyotes were killed during the monitoring period), it usually didn’t take long for a territory to become vacant.

This complex social structure illustrates why coyote numbers are difficult to manage at the landscape level.  In areas where available territories are limited, coyote numbers appear to be regulated more effectively by competition with one another rather than by mortality from hunting and trapping.  If coyotes truly are having an impact on deer populations, the most effective response may be to improve deer habitat, rather than kill more coyotes.  Coyotes make convenient scapegoats, but they are just one species in a multi-predator system that also includes bobcats and bears.   As is usually the case in wildlife management, ecological relationships are almost always more complex than they appear on the surface.  Certainly, the predator-prey dynamics of coyotes and deer are no exception.

All photos courtesy of Virginia Tech.