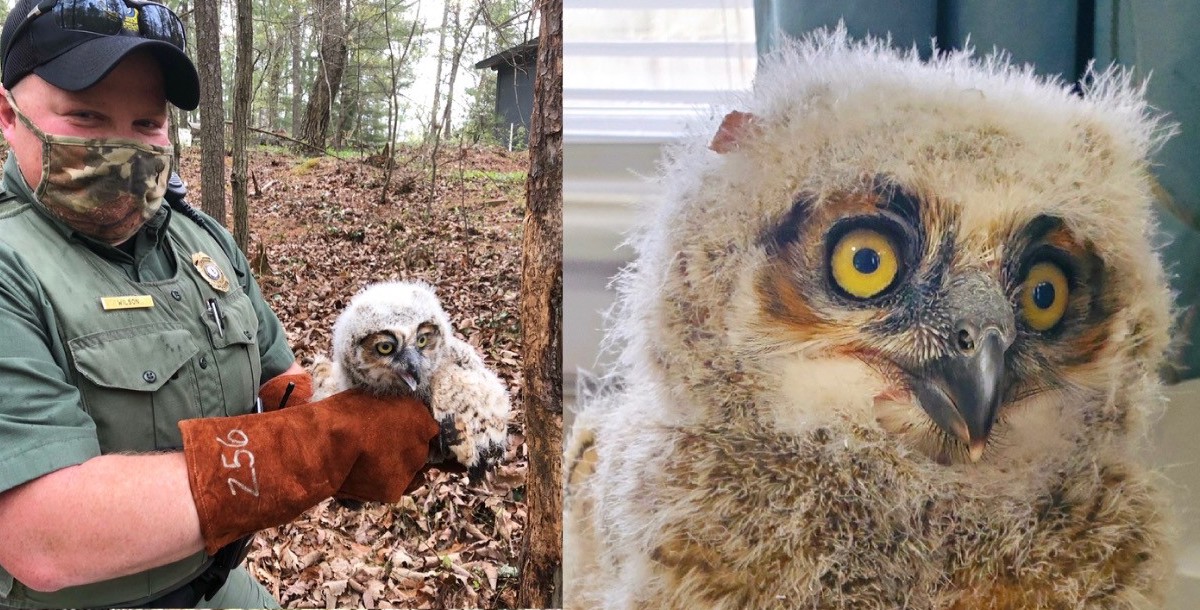 Photos by Courtesy of the Southwest Virginia Wildlife Center of Roanoke

Officer Shane Wilson of the Department of Wildlife Resources (DWR) Conservation Police assisted in attempting to re-nest a juvenile great horned owl in April in Roanoke. The juvenile owl was discovered by the owner of local business Black Dog Salvage while he was working in the yard. The owl was stuck in an air conditioner. The gentleman called the Southwest Virginia Wildlife Center of Roanoke (SVWC) for assistance, and SVWC executive director Sabrina Garvin contacted CPO Wilson.

“I have a really good working relationship with the Southwest Virginia Wildlife Center,” said CPO Wilson. “Sabrina took the owl in and asked if I’d help locate the nest.” CPO Wilson conducted an extensive search for the nest from which the owl originated, with the help of a tree climber from Brown Hound Tree Service. “I found a nest and I helped them try to orchestrate getting the owl into the nest, but it was too small for the owl to be put back into it.”

The juvenile owl is currently being cared for at SVWC and will be released when its ready to return to the wild. “Not all renest attempts are successful but we are so grateful for private organizations like Brown Hound Tree Service and great folks at the Virginia Department of Wildlife Resources that donate their resources, time, and skills to help wildlife. We would also like to thank the rescuer for finding this owlet and supporting our efforts to renest him,” was the SWVWC statement posted on social media.

“It’s fun to have those calls where you can directly help wildlife and do something that shows the community how we’re helping wildlife,” said CPO Wilson. “And the community gets involved, too! It’s a great working relationship between DWR and Southwest Wildlife Center and the community.”