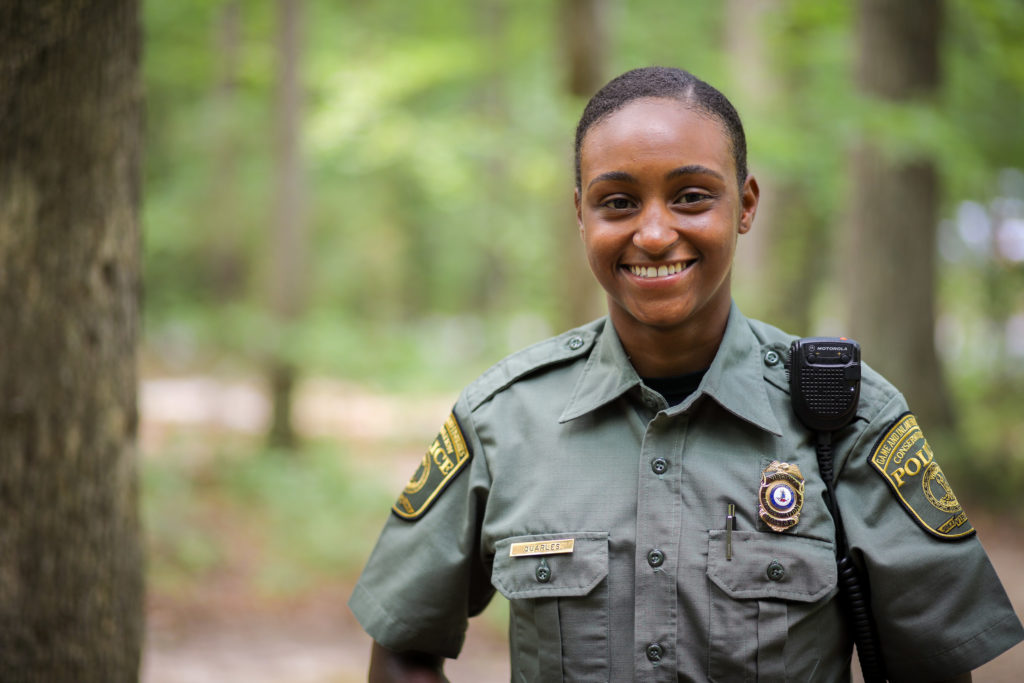 CPO Katiana Quarles was one of two DGIF officers to receive an ‘Officer of the Year’ award. Photo by Meghan Marchetti/DGIF.

On January 15, 2019, Louisa County Crime Solvers, Inc. held their annual Law Enforcement Officer of the Year breakfast. During the breakfast, DGIF Officers Katiana Quarles and Daniel Eller received the Officer(s) of the Year Award! Officer Eller was on duty and unable to attend but both Officers were surprised and humbled by the recognition.

On July 21, 2018, Officers Quarles and Eller were patrolling Lake Anna and responded to a call about a few people missing from their boat. Upon arrival, the Officers observed several people in the water attempting to dislodge a grounded boat. As weather conditions quickly deteriorated, one individual began struggling and Officer Quarles entered the water in an attempt to rescue him. During the rescue, two others jumped from the boat into the almost unbearable water attempting to assist Officer Quarles. Officer Eller positioned the patrol boat to help two of them while the third man responded to Officer Quarles lifesaving talents and began breathing. The three victims were pulled into the patrol boat and returned to shore.

The selfless, quick actions of Officer Quarles and Eller resulted in three lives being saved that day. Conservation Police Officers and Officers in general, spend each day protecting the citizens of the Commonwealth and beyond. They are not thinking about what is best for them and in this situation, it is perfectly clear that our Officers had one thing on their minds: saving the lives of people just out for an afternoon boat ride.

DGIF wants everyone to be safe on the water which means ALWAYS wearing your lifejacket. There are many different types and fits so we urge you to take some time to find one that is right for you.

Thank you to Officers Quarles and Eller who acted fearlessly in protecting our citizens and congratulations on this award!