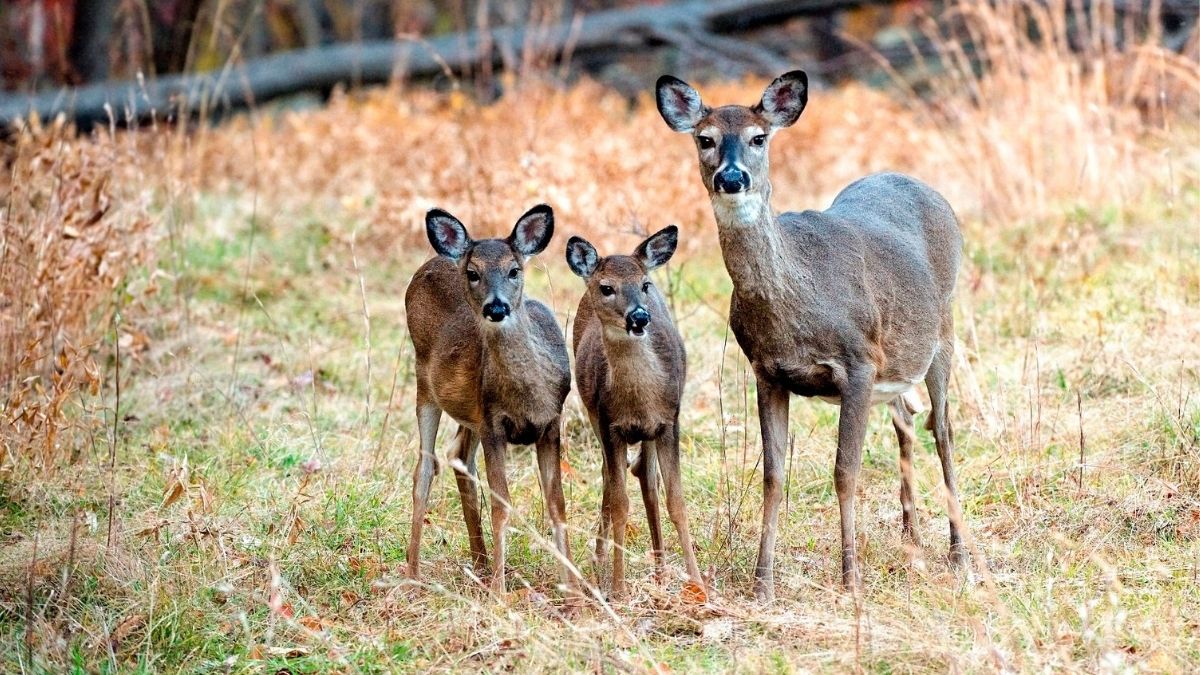 The whitetailed doe typically gives birth to twin fawns in late spring each year. The “button” buck and doe fawns pictured here with their mother are a perfect example of the buck’s larger and heavier body. And it doesn't matter what part of the country we're talking about, the buck fawn will be larger and heavier than their sibling doe fawns. A doe fawn that achieves a body weight of 80 pounds may be mature enough to go into estrus and give birth to her own fawn the following June.

When I wrote my book The Deer of North America back in 1978, I had already been studying deer for 39 years and had taken thousands of photographs of them.  I have over 17,000 reference books in my personal library and I read 486 books and biological reports on deer in order make my own book as complete as possible.  One of the reports, in the Journal of Wildlife Management of 1965, was written by Hellenette Silver.

Hellenette Silver and her husband were wildlife biologists working for the Game Department of the State of New Hampshire. They were doing a study of white-tailed fawns and had a number of the fawns, both bucks and does, penned together in a large fenced area where they were provided with unlimited highly nutritious feed. This insured the optimum growth potential for the fawns. In the following June, some of the then-year-old does gave birth to fawns of their own. Although the Silvers had not witnessed any breeding activity they knew that some of the little fawn bucks must have been mature enough to be able to do the breeding because no adult buck had had access to the pen.

That discovery sparked additional investigations by many biologists in various states confirming the Silvers’ findings. It was determined that if a little buck’s antlers developed enough to break through the skin, and actually showed some antler growth, there was a good chance that his testosterone level was high enough for his sperm to be viable.

Aaron Moen was the first to discover that if a little doe fawn achieved a body weight of 80 pounds, she would be mature enough to go into estrus and could become pregnant. That fact accounts for much of the activity in the so-called second rut, which takes place around the second week in December. The additional month is needed to allow the spring doe fawns time to gain enough weight to become fertile. In America’s heartland, in states such as Illinois, Indiana, and Iowa, with their rich soils, about 80% of all the 7-month doe fawns become pregnant.  In my home state of New Jersey about 40% of the 7-month doe fawns become pregnant. In Virginia, the fawn breeding rate based on yearling female lactation rates ranges by county from 0 to 40% by year and averages about 12%.

Starting in southern Pennsylvania and going south on I-81, through Maryland, West Virginia, and Virginia, you will notice slight ridges of limestone rock sticking up through the soil. Limestone is great to have in your soil but not when the soil is so shallow that the basic rock formation sticks up through the earth. When those fields were first farmed in the 1600s, the soil was richer and deeper. Poor farming practices allowed the soil to erode on the hillsides and the resultant loss of fertility changed the farming from grain crops to pasture. It is the loss of fertility on those lands that prevents the fawns from reaching their full potential. In our northern tier of states, all across the continent, none of the doe fawns become pregnant because the warm weather growing season is too short and they don’t get enough nutritious food. 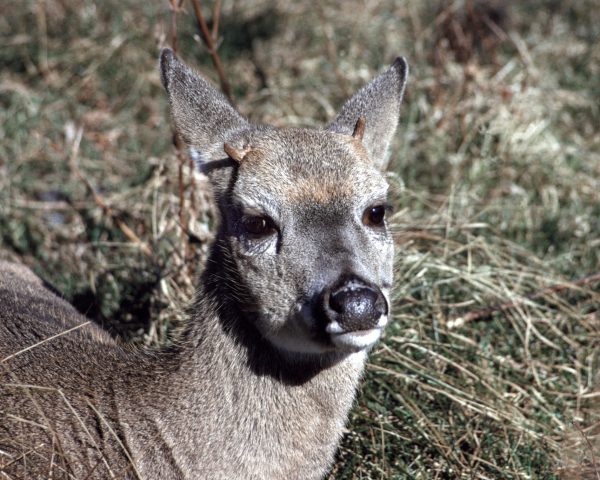 The antler nubs don’t become very noticeable on a “button” buck until they are 8 months old. When this occurs, there is a good chance that his testosterone level is high enough that he could sire an estrus doe.

I have noticed that the little antler nubs don’t really become conspicuous on the “button” bucks till January when they are 8 months old. And it doesn’t matter what section of the country we are talking about, the little bucks from the same area will be larger and heavier than their sibling doe fawns. I have also taken note that by the time the little bucks are 5 months old they are showing interest in the does, if only their mothers. They often smell her and might attempt to mount her. Their size difference makes the attempted mounting a physical impossibility. Most does won’t tolerate such shenanigans and strike the little buck with their forefoot. When the little bucks attempt to mount their female siblings, they don’t have any better success until the does reach their needed weight and develop enough to come into estrus.

By the same token, the size and weight difference between an adult buck and a 7-month doe fawn precludes many of them from breeding. With an adult buck weighing between 150 to 250 pounds the buck overshoots the mark or the fawn gives way beneath his weight. That doesn’t prevent the dominant buck from attempting copulation. When the doe fawn is in estrus the big buck pursues her as assiduously as he did the adult does.

That’s not to say that the big bucks don’t breed any of the fawns, it’s just that it gives a chance for the yearlings as well as the fawn bucks to do some of the breeding. Some of the latest research has shown, through DNA, that up to 25% of twin fawns have had different bucks as their sires. Ordinarily, the adult does choose to be bred by the biggest bucks in their area. They can tell instantly whether or not he is a fit sire for their fawns by looking at his antlers and body size. The does don’t make a conscious decision about such matters because it is knowledge that they have instinctively.

Having and raising fawns is an expensive outlay of time and energy for the does and the basic drive of all creatures is the perpetuation of their species. The body size is also a better fit for buck and doe fawns. The little does sometime prefer to be bred by little bucks they have known intimately since birth. Instinctive genetics are thus pushed aside and actual inbreeding may be involved. Under that situation, inbreeding becomes a distinct possibility because the breeding takes place before the little bucks, as yearlings, are driven to disperse.

Another advantage the younger bucks have is that they are not as completely worn out as the dominant bucks after the closing down of the regular breeding season. Some of the adult bucks deliberately retire from the constant stress of being dominant even before the regular season has passed.  Mandatory lipogenesis means that the bucks must regain some of the 25 to 30% of their body weight that they lost during the pre-rut and the regular rutting season if they are to survive the winter months. Being dominant extracts a steep price and many of our largest, best bucks just don’t make it through a hard, early winter. It is also imperative that the does also regain some of their lost body weight.

Dr. Leonard Lee Rue III is a foremost authority on whitetail deer in the country. His 31 books and more than 1,400 magazine articles and columns about whitetails are included in many wildlife enthusiasts’ reference libraries.