Teaming Up with Dogs for Turkeys 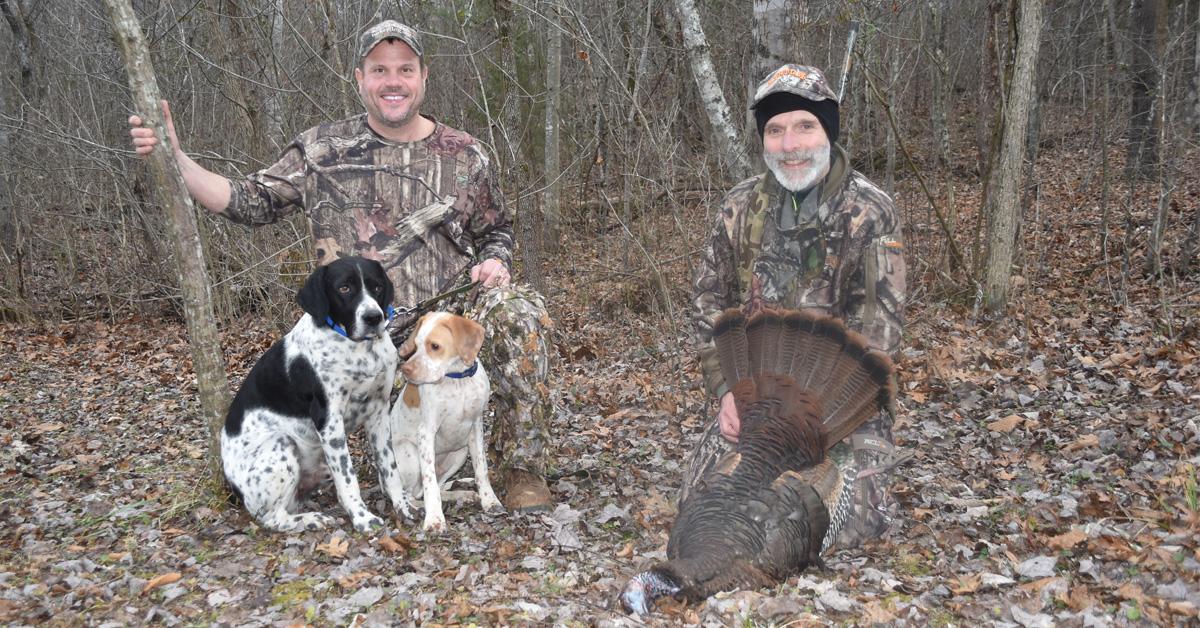 Upon our arrival at a Botetourt County dairy farm last December, as soon as Mike Morrell, a Bedford County restaurant owner, affixes global positioning satellite (GPS) collars to his turkey dogs Bailey and Brier, they bound up the mountain in front of us. Six-month-old Brier, however, soon returns to us—apparently unsure whether to stay close to his master or follow Bailey, a 7-year-old veteran of many turkey hunts.

A few minutes later, we hear Bailey, a member of the line that the late Bedford County trainer John Byrne created and that son J.T. continues, begin to bark. Looking at his GPS, Mike says, “In just that little bit of time, he covered 850 yards before he busted turkeys. Amazing.”

Indeed, Bailey is amazing. One-quarter plot hound, one-quarter pointer, and one-half English setter, Bailey is the epitome of what a turkey dog should be: intelligent, obedient, athletic, and relentless. The year before on a Campbell County outing with Mike and Bailey, the canine busted two gangs our first 15 minutes afield, and I was able to harvest a bird that Mike and I called in.

After a lapse of a few minutes, we hear Bailey yowl again, then after an interlude, two more different bursts of barking.

“He’s probably now scattering the ones that flew into trees on the first bust,” Mike says. “He won’t come back until he’s satisfied that every turkey has been thoroughly scattered. C’mon. I’ve marked four places where Bailey busted up birds. We’ll set up right in the middle of them.”

The 850 yards that Bailey quickly traversed are mostly straight up a mountain, and the journey takes us far longer than the few minutes it took the Byrne-bred canine. Meanwhile, tagging along, Brier senses something thrilling is about to happen, but he’s not quite sure what.

“He was born on June 10. I bought him in August and sent him to obedience training class in September,” Mike says. “Next, I started having him follow scent trails that I created with turkey wings and having him find those wings. December 3 was his first day in the woods. Nobody has ever killed a turkey when Brier’s been along on a hunt. We’ve just got to get a bird for him today so he can carry that memory over to next year and know the excitement of it all.”

Our paths and Bailey’s finally intercept halfway or so up the precipitous mountain. Mike finds a relatively flat place for him and the dogs to set up. He trims some greenbrier from in front of a massive hickory, erects a camouflage blind around the tree, positions a tarp and a blanket inside, gives Bailey and Briery water, and instructs them to enter the enclosure and “stay.” He then tells me to set up about 20 yards below him, facing down the mountain, saying he will set up to see birds coming down the ridge while I monitor the lower reaches. 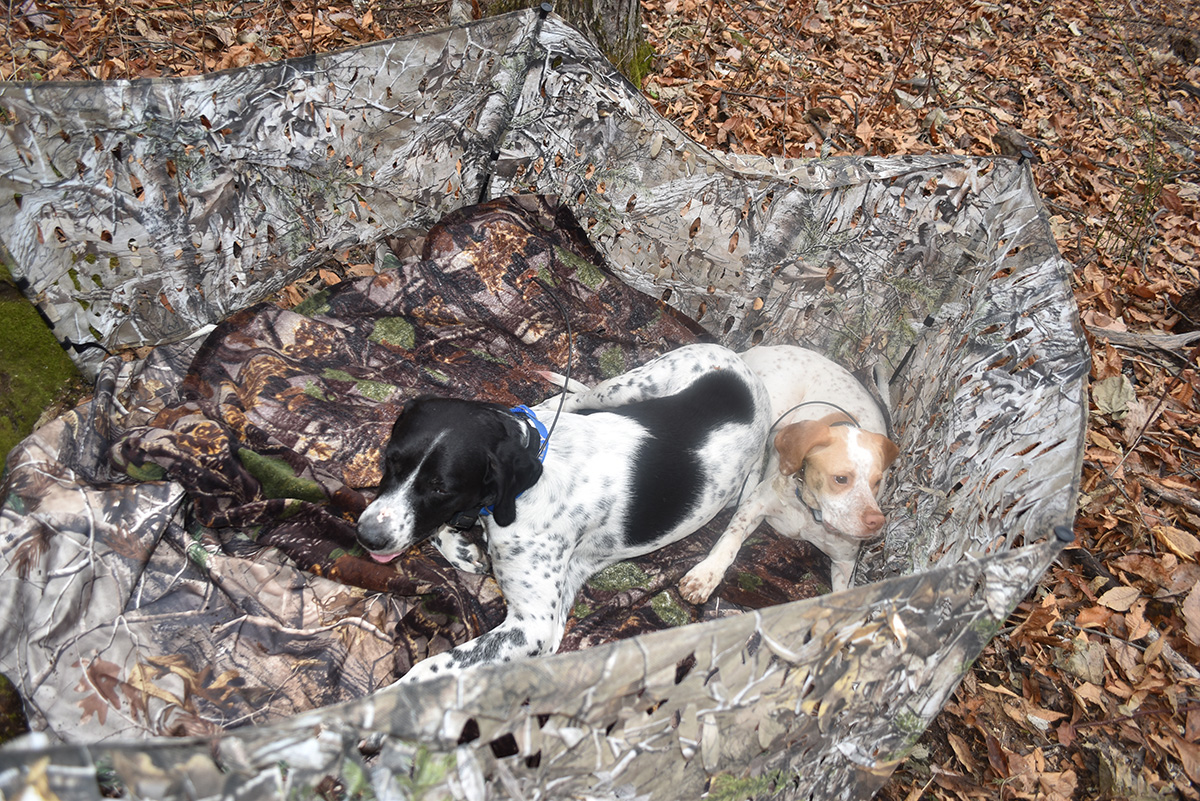 Bailey and Brier patiently waiting in the blind for Mike and the author to call in turkeys.

Quality turkey dogs scatter flocks so thoroughly that 90 or more minutes may expire before birds start to respond to calls. So it is on this outing as I finally hark to birds replying to Mike’s and my calls. A few minutes after they stop calling, Mike walks down to my positon. “There were five of them,” he sighs. “I never had a clear shot and had to let them walk. I’m sending Bailey after them again.”

This time, Bailey’s scatter takes place near the peak of the mountain, and when, thanks to the GPS, we arrive there, we find that the terrain is virtually perpendicular. Every time I try to set up next to a tree, I find myself slowly sliding down the ridge. Such is hunting, sometimes, in the Western Virginia highlands.

At last we become semi-comfortable in our set-up, and once again, 90 minutes or so transpire before we hear a jenny answering our yelps, clucks, and kee-kees from far down the mountain. Minutes more pass, then I hear Mike whisper from above me. “She’s coming straight toward you.”

Mike’s higher position has allowed him to spy a turkey I still haven’t seen, but I have enough sense to mount my 12 gauge and peer into the thicket below us and an old logging road. My fervent hope is that the jenny will step out onto the travelway. Then, as it often is with turkeys in both the spring and fall seasons, the jenny suddenly materializes below the old tote road. After some long seconds of my not having a shot, and Mike continuing to make soothing clucks, the bird enters a small clearing and I shoot.

What It’s All About

At the sound, Bailey, as he has been trained to do, explodes from the blind and streaks toward the flopping bird—Brier is literally on his mentor’s heels. Bailey pounces on the turkey and Brier does the same. Seconds later, I arrive, hoist the young hen, and excitedly pat both dogs. And I’ll admit it—I then scream a loud “yahoo,” as I am just as excited as Bailey and Brier. I turn around and see Mike, who says, “Brier knows what this turkey dog thing is all about now. He’ll never forget this hunt.”

And neither will I. When we arrive back at the truck, Mike checks all his GPS units and announces that Bailey has travelled 10.5 miles, Brier 6.4 miles, and the two humans 4.4 miles. Having dogs do much of your rambling is certainly one of the charms of turkey dog hunting, but the main draw is watching and being a part of the joint effort of dogs and their owners. 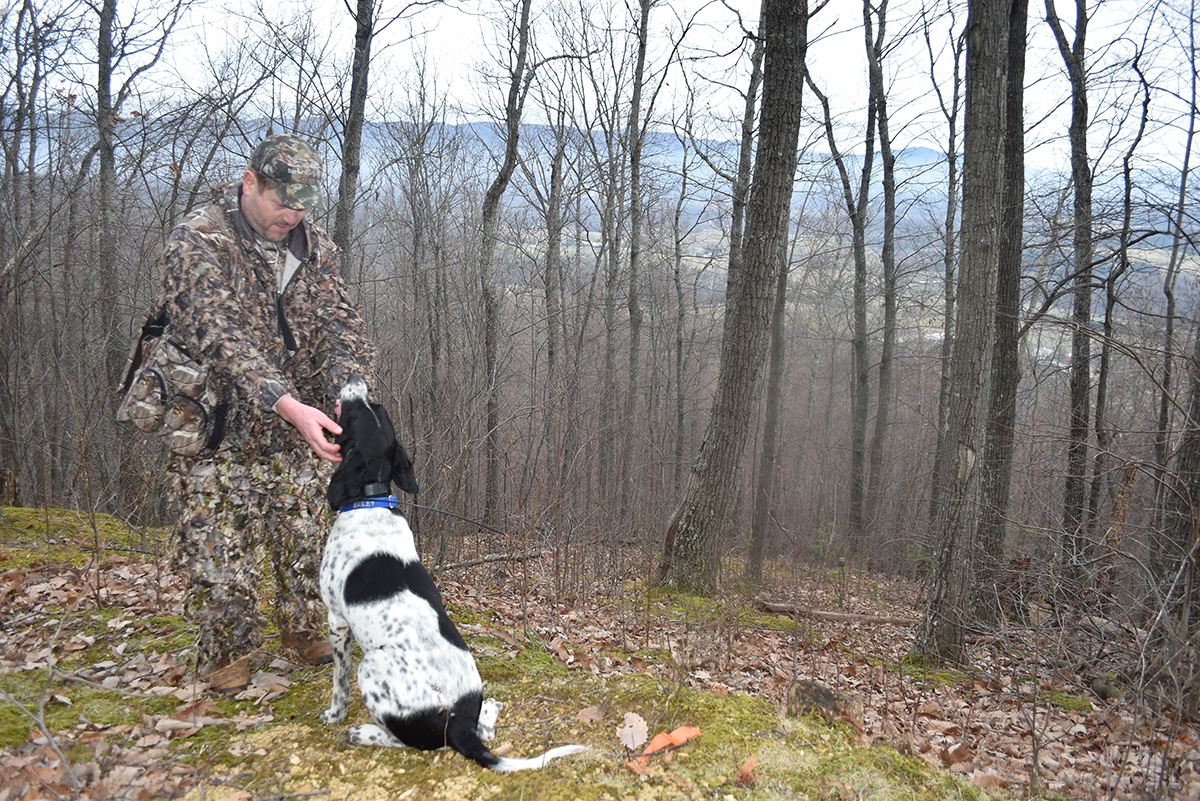 Mike Morrell telling Bailey “to go get them again,” after the first scatter fails to lead to us having a shot.

“The true joy of hunting turkeys with a well-trained dog is the teamwork between hunter and dog,” said Mike. “The combined years of dog and hunter training and experience channel the efforts of both into a finely tuned team. Without being given commands, the dog knows what the hunter wants him to do. The extra special part is having the dog return from flushing birds to lie in the blind for hours and not move until the hunt is over. And best of all is having that same dog be a family pet and provide all the love a dog can give year around.”

Carroll Gathright, who is 73 and lives near Dillwyn in Buckingham County, has been raising turkey dogs since he was 6, among them Brier.

“My grandfather, father, and my two uncles all turkey hunted, and I was exposed to it at the age of 5,” he recalls. “I was so interested in turkey hunting, the outdoors, and dogs that I became addicted to the pastime as I grew up. I started my present line when I was about 30 years old. A female English pointer that I purchased as a puppy turned out to be a dog that you dream of in the turkey woods. That is when I decided to start my line so that I would have great dogs to fuel my adventure in turkey hunting.

“I’ve tried to find the very best dogs to breed to no matter what the breed. I look for smarts, instincts, barking, range, disposition, nose, and strength. I really want dogs that are as good at home as they are in the field. Over the years I have bred to droppers, English setters, English pointers, Plot hounds (for bark and nose) Gordon Setters, and Irish Setters. I think that I have been fairly successful in raising excellent dogs for myself and other turkey hunting addicts.”

Bruce Ingram has written books on the James, New, Potomac, Shenandoah, and Rappahannock rivers, plus Living the Locavore Lifestyle and four young adult fiction novels; for more information, contact him at bruceingramoutdoors@gmail.com.