DWR CPOs Participate in National Night Out Across the State 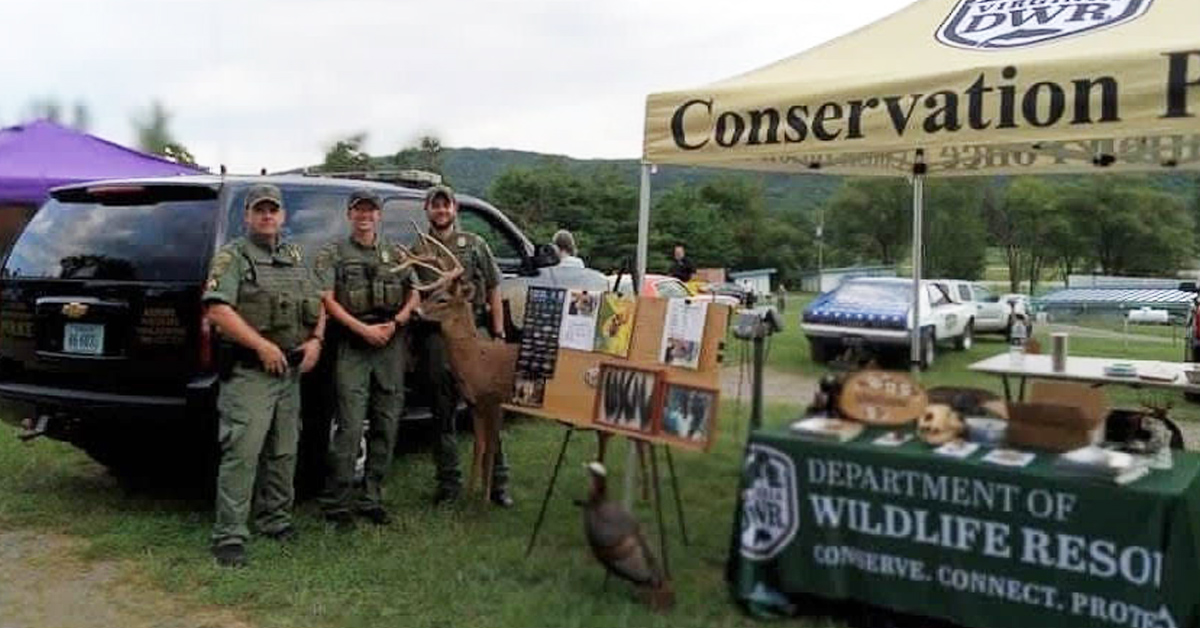 National Night Out, which took place on August 2 this year,  is an annual community-building campaign that promotes police-community partnerships and neighborhood camaraderie to make our neighborhoods safer, more caring places to live. National Night Out enhances the relationship between neighbors and law enforcement while bringing back a true sense of community. Furthermore, it provides a great opportunity to bring police and neighbors together under positive circumstances.

DWR CPOs attended 33 events and interacted with thousands of citizens from across the Commonwealth on National Night Out!

CPO Jones displayed a 21′ Safeboat along with various boat safety equipment and handouts at this event.  His CPO patrol vehicle was also displayed for the crowd. He answered questions from citizens who stopped by his display about boating, hunting and fishing.  The event was well attended by the local community.  Other local law and fire/EMS departments were also present.

CPOs Baumbach and Braziel displayed a booth with DWR educational material and a CPO patrol vehicle along with the presence of K9 Gracie.  The event was well attended by citizens of that community.  K9 Gracie was a big hit with the children and a Med-Evac helicopter landing and take-off demonstration was also a crowd pleaser.

CPO Druy attended the Lake Christopher Community event were she gave out various DWR publications, hand-out and Junior Game Warden sticker badges to the kids ( well received by the kids ).  The event was very well attended by families in the local community.  She answered numerous questions concerning bears and other hunting, fishing and boating topics.

CPO Smith attended this event displaying his patrol vehicle and giving out DWR hand-out materials.  Approximately 100 people attended this event.  Law enforcement officers in attendance hand pulled a fire truck across the parking area in a display that well pleased the crowd.

CPO Early attended this event displaying his patrol vehicle and various law enforcement equipment.  DWR hand-outs materials were also given out.  Approximately 600 people were in attendance from the community.  Also present was a DJ playing music,  kids games and bounce house and many food vendors.

CPO Gilmore attended this event displaying various wildlife pelts and furs.  He also gave out various DWR publication hand-outs to the crowd and answered numerous questions concerning hunting, fishing and boating. The animal pelts were a big hit with the kids in attendance.

CPOs Howlett and Hill displayed a CPO patrol vehicle and a WarEagle patrol jon boat for the event.  They also had various DWR publications and informational hand-outs for the public. The event was very well attended with several hundred people viewing the various displays from local and state law enforcement agencies.

CPO Dagliano displayed a 23′ Maritime Skiff along with a CPO patrol vehicle.  Numerous other law enforcement agencies also attended along with fire and rescue units.

CPO Chester attended this event which was very well attended by the community.  He was able to answer many law and wildlife related questions from the public attending.  In attendance at this event was the Secretary of Public Safety Bob Mosier, State Senator Joe Morrisey and various local government officials.  CPO Chester was able to speak with each of them about DWR and our mission.

CPO Chester also attended this event and was able to answer many questions from the attending crowd.  The event was well attended with various law, fire and EMS personnel.

Franklin County:  Sgt. Jamie Slaughter, Officer Isaac Boulanger, Officer James Hale and Officer Adam Roberts attended the National Night Out Event in Franklin County at the West Lake Cinema.  The officers had the opportunity to interact with the public and pass out DWR items.  Possibly the most interesting part was that they had a Med-Flight helicopter fly in and a paragliders circling the event.

Patrick County:  Officer Dale Owens attended the National Night Out Event in Patrick County at Liberty Lake Park.  The officers had the opportunity to interact with the public and pass out DWR items.

Bedford County:  Sgt. Tim Dooley, Officer Brett Clawson, Officer Tyler Routon, and Officer Michael Morris attended the National Night Out Event in Bedford County at Liberty Lake Park.  The officers had the opportunity to interact with the public and pass out DWR items. Possibly the most interesting part was that they had a Centra Med-Flight helicopter fly in and land on the ball field during the event. 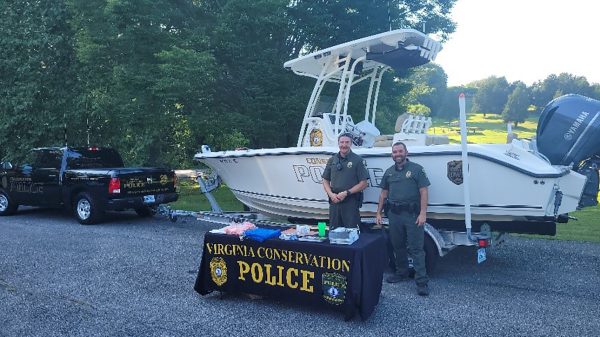 Roanoke County:  Officer Joe Williams and Officer Shane Wilson attended the National Night Out in Roanoke County at the Mount Pleasant Methodist Church.  The officers had the opportunity to interact with the public and pass out DWR items.

Amherst County:  CPO John Daniel and CPO K9 Richard Howald were there along with K9 Sky to represent the DWR.  Amherst Sheriff’s office, State Police, Amherst PD, Amherst County Public Safety, and Amherst County Public Works were also in attendance.  DWR brought out the R2 command trailer, numerous deer skulls, a bear skull, and stickers for the kids, regulation books, and positive attitudes. CPO Howald was a hit, as always, and was able to show off Sky.  The event gave out free school supplies, had food, laser tag games, small rides for the kids, and a live band.  CPO Daniel spoke with many local people from his district, make some new contacts, and handed out a large number of business cards. 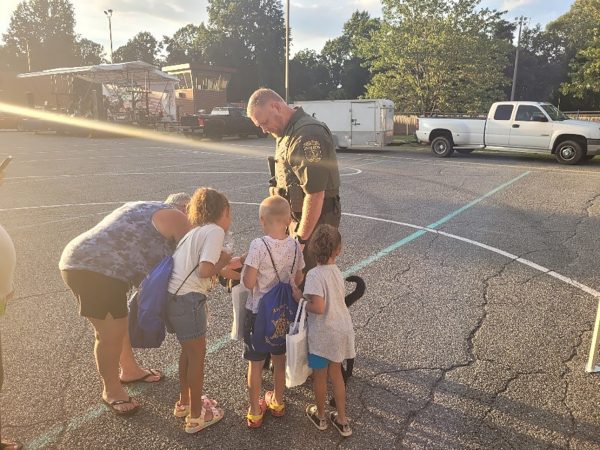 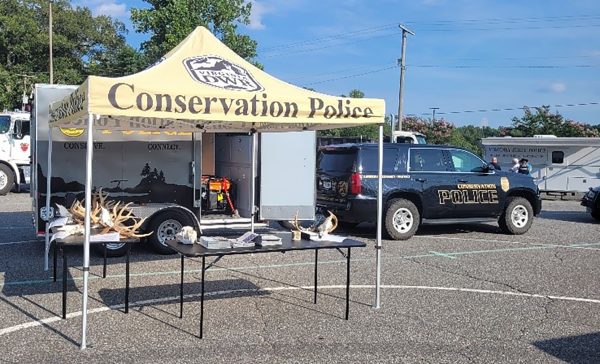 Amelia County:  Officer Webb and Officer Yates attended the National Night Out in Amelia County. The event was very successful. The officers had the opportunity to interact with the public, pass out DWR items and show children the inside of their patrol vehicles. 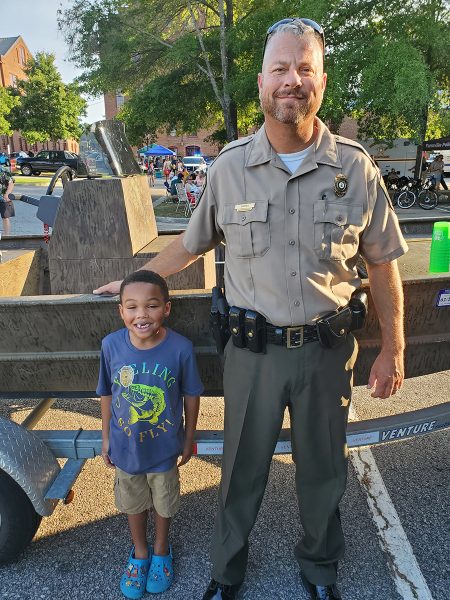 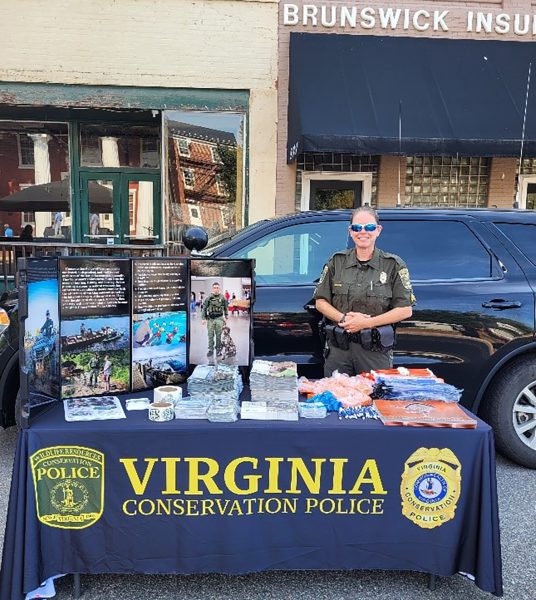 Conservation Police Officer Andrew Bobbitt and Conservation Police Sergeant Wes Billings attended the National Night Out event in Hillsville, Virginia.  The event was also in conjunction with a Back to School Bash Sponsored by Carroll County and the Hillsville Police Department.

The officers provided a patrol vehicle and Jon boat as a display and provided lots of handout material promoting boating and water safety.  The officers were also able to make several new “Junior Officers” and send them home with that special orange whistle. 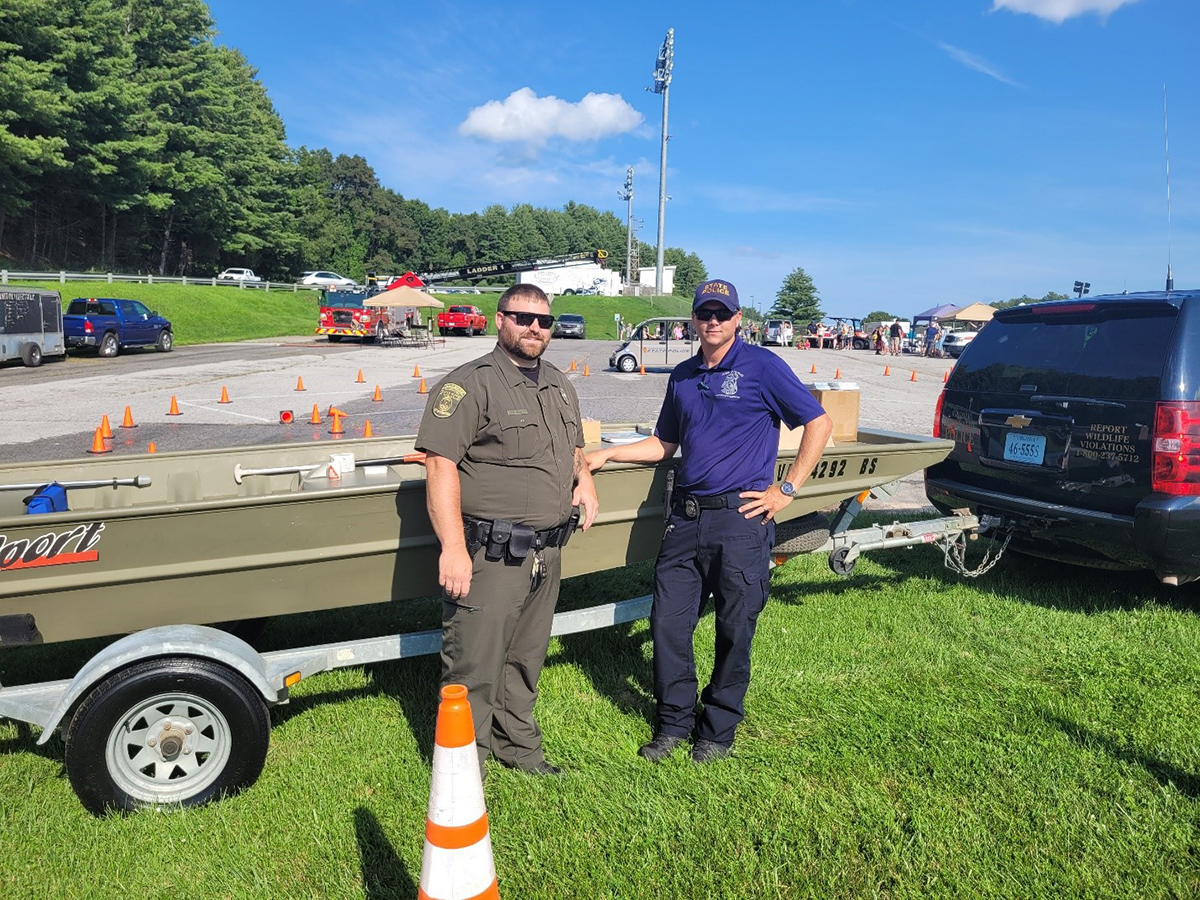 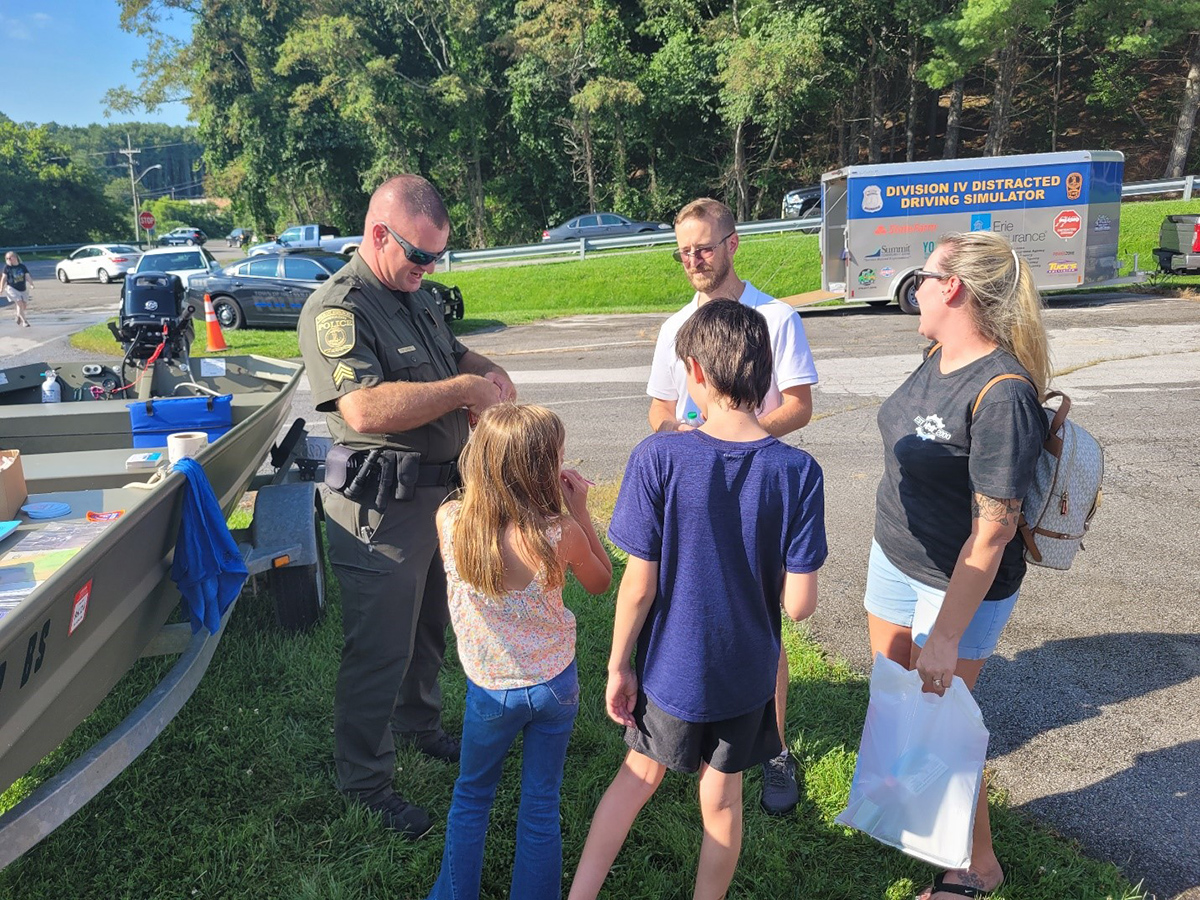 On August 2, 2022, CPO Rohrer and CPO Wood participated in the Pulaski County National Night Out held at Randolph Park.  The event was organized by the Pulaski County Sheriff’s Office and had representation from over 5 law enforcement agencies and several fire departments within the county.  Rohrer and Wood handed out several “wear it-lifejacket” cups and sunglasses holders, and educated visitors on the responsible wear of life jackets while enjoying Virginia’s waterways.  They also handed out hunting/fishing/migratory bird digests and interacted with over 500 community members.

On August 2, 2022 Master Conservation Police Officer Jason Harris and Senior Conservation Police Officer Eric Rorabaugh set up a patrol vehicle / patrol boat display along with an information table at the Law Enforcement National Night Out in the Town of Independence.  Officers answered multiple questions related to hunting, fishing and boating during the event.  Approximately 500 kids were contacted with many expressing interests in a career in conservation law enforcement.  These events help establish good relationships with the community and information shared by community members relating to violations was received.  This gives officers in this area an upper hand going into the upcoming hunting season.

On August 2 CPO’s Boyette and Chaffin, along with K9 Molly attended the Galax National Night Out. The event featured a wide array of public safety and community organizations who came together for a night of fun with the community. During the evening CPO’s interacted with numerous citizens, answering questions and ultimately providing information on ways to connect with Virginia’s outdoors. K9 Molly was especially popular with attendees who wanted to stop and say hello or have their picture taken. The event was well attended and proved to be a success in sharing the work and mission of VA Conservation Police with the community. 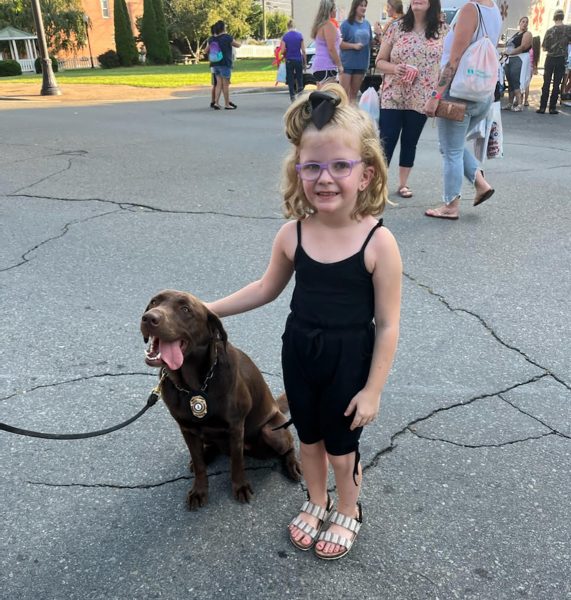 Conservation Police Officer Tyler Sheets attended National Night Out hosted at the Chilhowie Town Park, in Smyth County. There were equipment displays set up by the Smyth County Sheriff’s Office, Chilhowie PD, Saltville PD, Washington County Sheriff’s Office, and Virginia State Police. The Smyth County Sheriff’s Office and Virginia State Police showcased their K9 Officers with different exercises throughout the event. Officer Sheets represented DWR by displaying a marked patrol unit, center console boat, and a kayak. The event provided citizens with an opportunity to meet their local law enforcement officers in a relaxed atmosphere and get up close to some of the equipment that helps get the job done. Children that attended the event were given the opportunity to win door prizes and receive free school supplies. In total, there were an estimated 500 citizens in attendance. 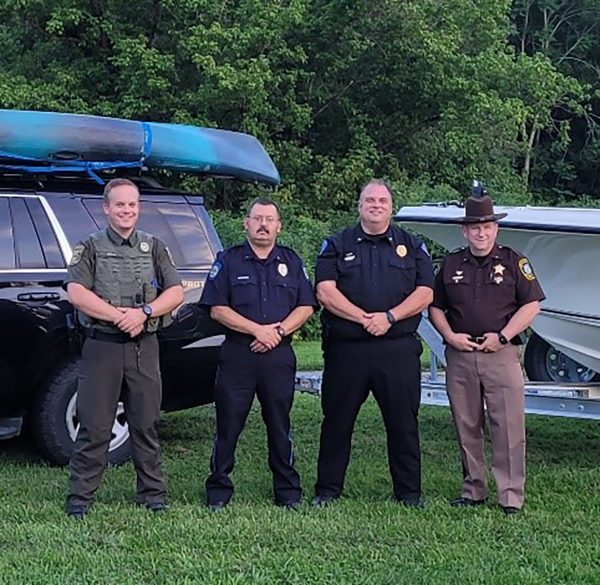 Officer Chittum participated in NNO hosted by Luray PD in Page County.  CPO Chittum had a display, which included a patrol boat.  There were about 25 attendees at the event.

Officer Dierberg participated in NNO hosted by Frederick County Sheriff’s Office in Frederick County. CPO Dierberg had a display, which included a patrol boat.  There were approximately 1500 attendees.  Lt. Governor Sears attended the event as a participant.

Officer Heine participated in NNO hosted by Strasburg Police Department in Shenandoah County.  CPO Heine had a display which included the district’s UTV.  There were approximately 300 attendees. 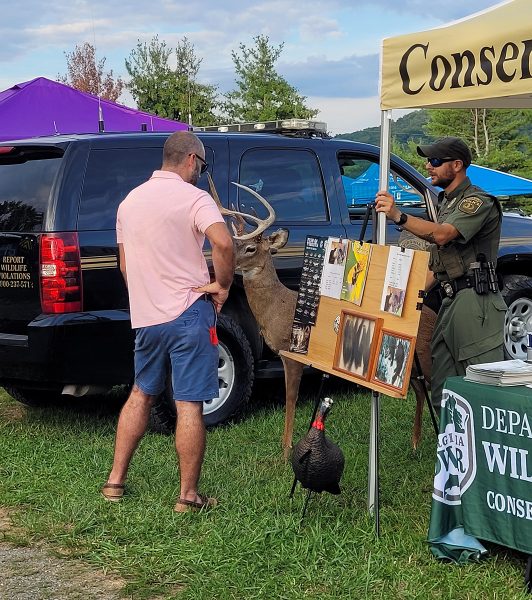 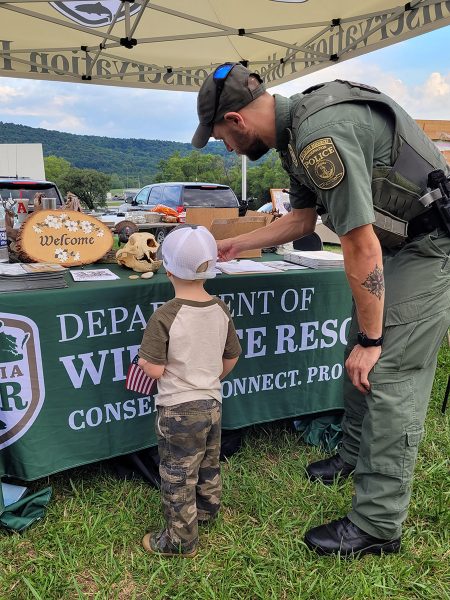 Officer Sumner, K9 Officer Patrillo, and K9 Bailey attended the Goochland County National Night Out hosted by the Goochland County Sheriff’s Office. In addition to DWR, nearly 500 adults and children from the community interacted with local and state law enforcement agency representatives from VSP, ABC, GCSO, Fire and EMS, and Animal Control. DWR provided several handouts, stickers, and regulation booklets for patrons to read and take home. Officer Sumner answered several questions regarding the role of CPOs in the community, wildlife interactions, and hunting and fishing regulations. K9 Bailey was a crowd favorite and K9 Officer Patrillo explained her abilities to dozens of groups throughout the event. Officers were also able to answer several questions about recruitment.

Sgt. Landers and CPO Palmisano attended the Fauquier County National Night Out event.  The new Key West patrol boat was on display, and several hundred children had the opportunity to get up close and personal with the Region’s premier patrol vessel.  Also on display were taxidermied wildlife and hunting regulations.  Many adults had questions regarding wildlife enforcement and the upcoming hunting season.  Fauquier Sheriff Falls came by the DWR display and personally thanked Palmisano and Landers for providing such a great Night Out experience for County residents.

Senior Officer Albert Medina attended the Manassas Park Police National Night Out. A large patrol boat was on display and information about DWR programs was provided. 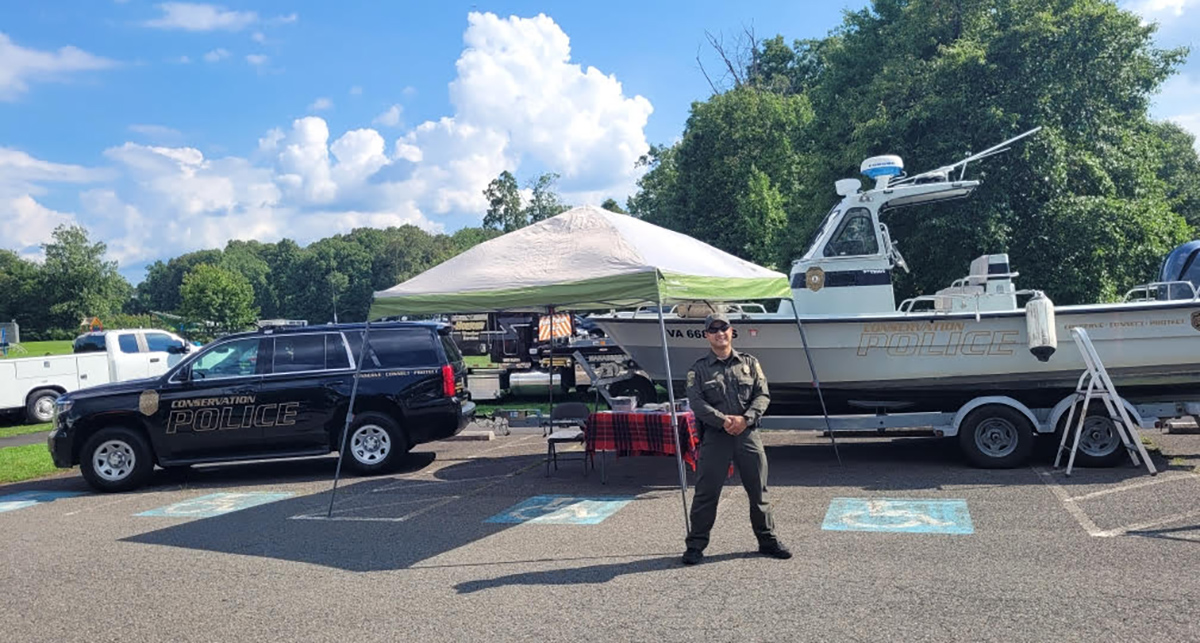