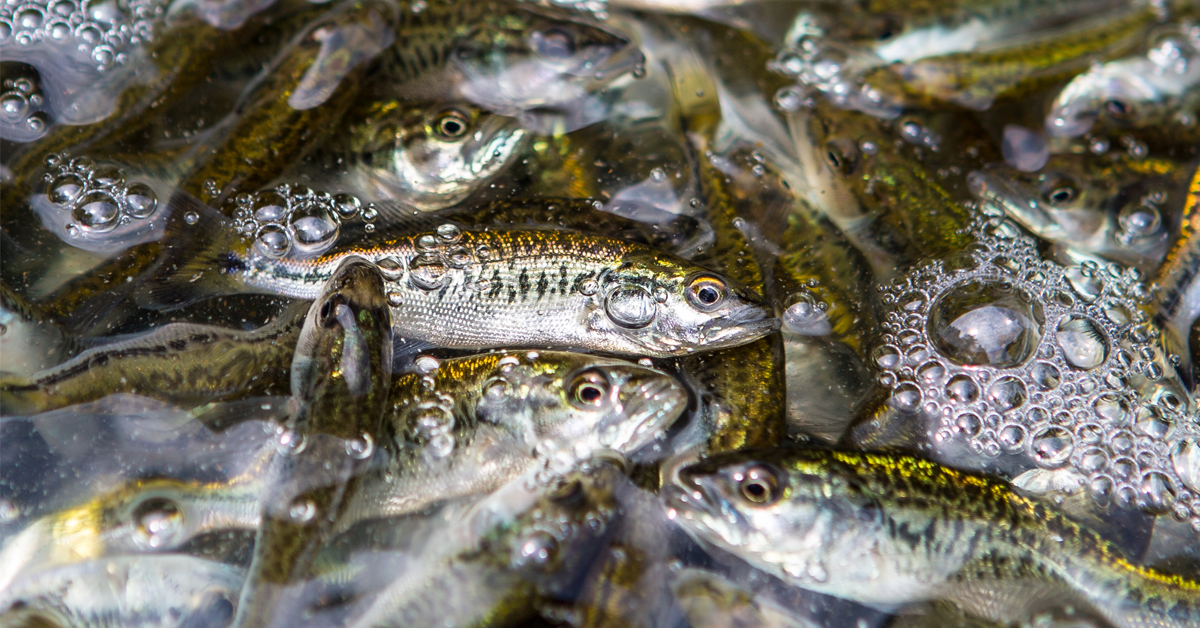 What are F1 largemouth bass?

F1 largemouth bass (also sometimes referred to as “tiger bass”) are the first generation cross between two subspecies of largemouth bass—the Northern largemouth bass (Micropterus salmoides salmoides) and the Florida largemouth bass (M. s. floridanus). These fish are called “intergrades,” instead of “hybrids,” because they are not a cross of two different species, but rather two different subspecies. By intentionally crossing the two pure subspecies, F1 fish are produced. This is important, because it has been documented that only the first generation cross (F1s) exhibit enhanced growth rates. Thus, the idea is to stock fish that can outperform the wild fish in our lakes, with respect to growth (and maybe ultimate size as well). 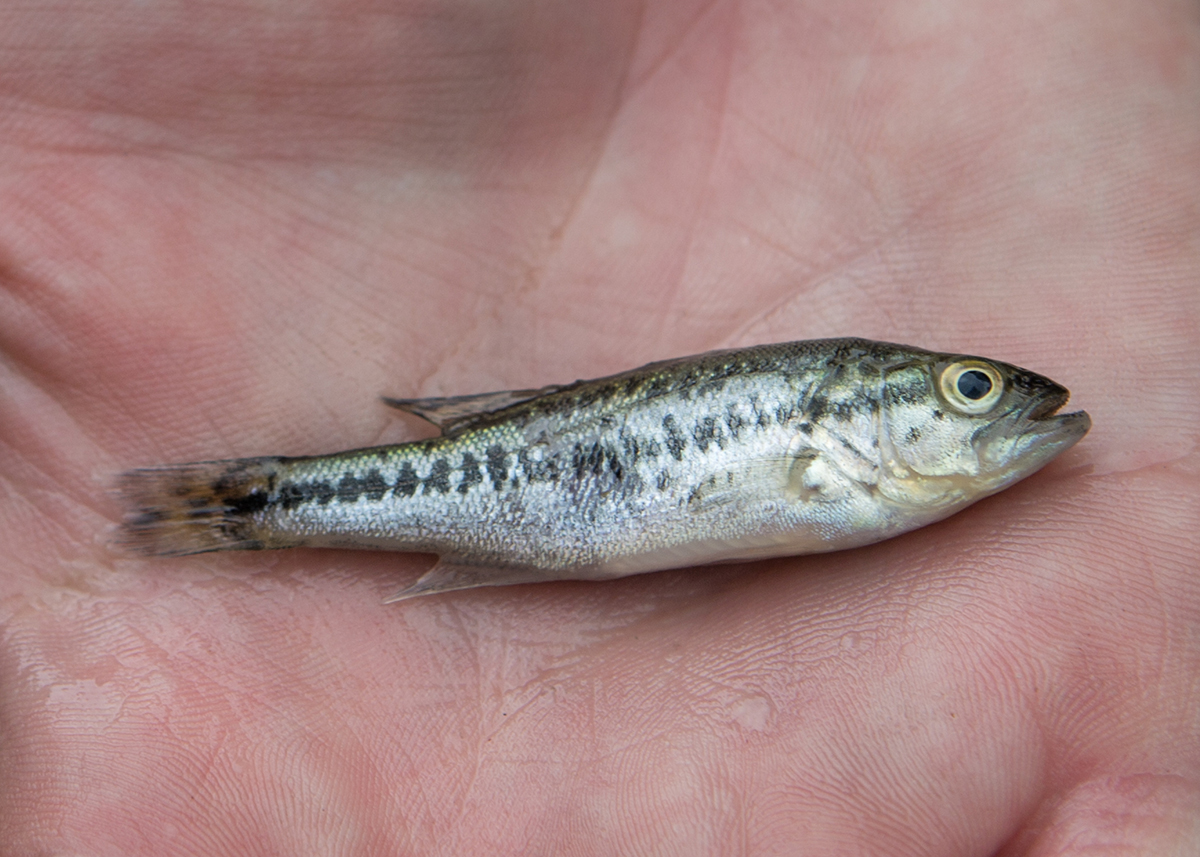 What kind of largemouth bass does Virginia have?

We have done an extensive amount of genetic testing in Virginia’s lakes. What we’ve found is that our largemouth bass populations are made up of fish with both Northern and Florida genetic traits. When we’ve looked at the frequency of Northern and Florida genes in our bass populations, we typically see anywhere from 40% to 60% Florida genes. All of our populations appear to be mixed. However, our wild fish are not first-generation crosses between pure Northern and Florida strains. Instead, they are what geneticists call an Fx generation. This simply means that it’s a fish that has both Northern and Florida ancestry, but isn’t the direct offspring of pure parents. You can think of it as the difference between a labradoodle and a mutt that has some lab and some poodle in its ancestry. The key to all of this is that by stocking F1 fish, we are not introducing any new genetic material into our populations, and we aren’t doing this in an attempt to change the genetic composition of the populations.

Where does the Virginia Department of Wildlife Resources (DWR) get F1 largemouth bass?

Currently, we do not have the hatchery infrastructure or a source of pure Northern/Florida broodstock required to produce F1 fish. Therefore, we are purchasing these fish from a private source that meets our fish health protocols (so we don’t introduce any new diseases into our waters). Because we have to purchase these fish, the entire program is only affordable if we can achieve results with a relatively small number of fish. Thus, the plan is to stock these at a low density, because that’s the only way it would be sustainable on a bigger scale (should the project prove to be successful).

Additionally, this is a good time to remind folks that stocking fish into public waters in the state is illegal without an authorization from DWR. We follow a very stringent set of protocols when we decide to stock fish, and this is not something to be taken lightly. Stocking the wrong fish in the wrong place can have serious consequences to the ecosystem. Because of this, we consider all potential stockings very carefully, evaluate the possible outcomes using the best available data, and make sure the fish we’re stocking come from a healthy source (so we don’t introduce any new diseases). Stocking any fish has consequences of some sort, and requires careful planning and evaluation. Many ecosystems have been irreparably harmed by people stocking fish (intentionally and unintentionally), and should never be done without considering all the possible outcomes.

Where is DWR stocking F1s?

Over the years, we have stocked F1 largemouth bass in several places. These include resources like Back Bay, the Chickahominy River, the tidal Rappahannock River, and several small impoundments. This current experimental stocking program is focusing on a set of large reservoirs. We are stocking these fish into Smith Mountain Lake, Claytor Lake, Lake Anna, Lake Chesdin, and Beaverdam Swamp Reservoir. Because this experiment is directed toward large reservoirs, it will be separated from any other work we might do with F1 fish on small impoundments (under 500 ac) or tidal waters. Those resources will be treated separately on a case-by-case basis. 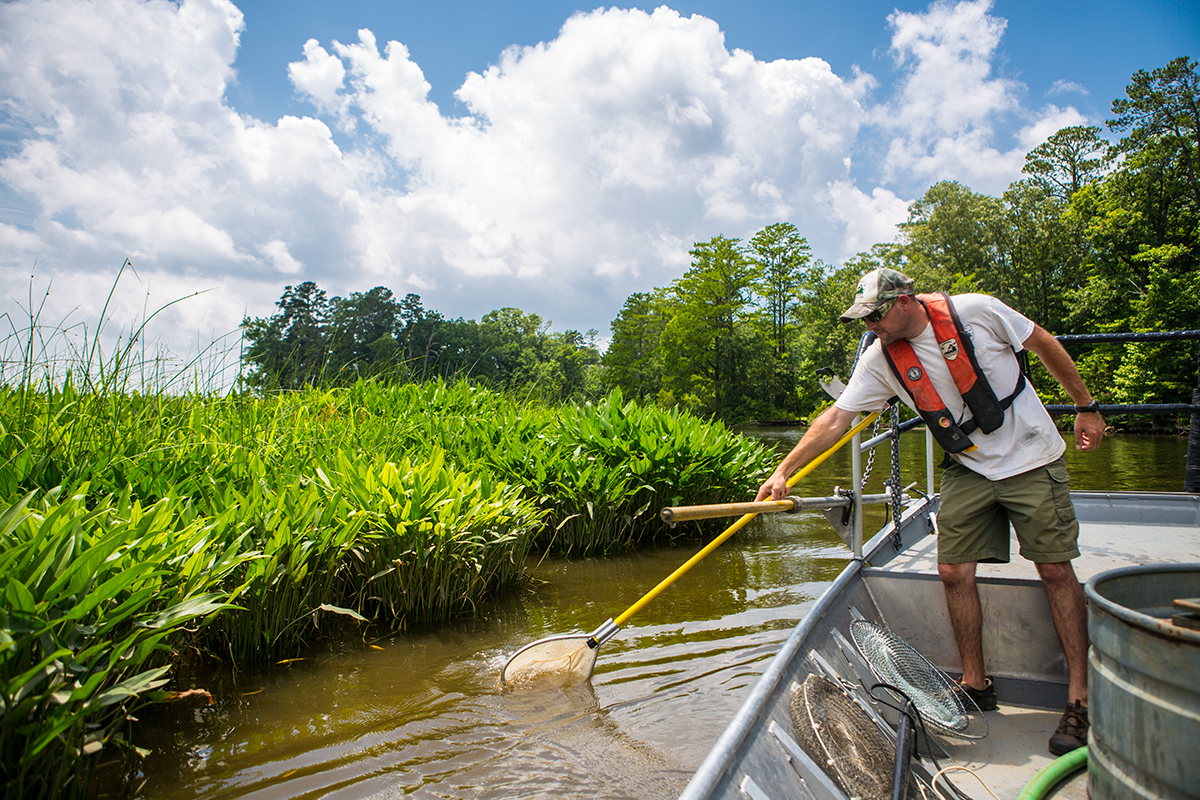 Why is DWR stocking F1s?

Studies have shown F1 intergrade fish have potential to grow faster and reach larger sizes than pure Northern strain fish, Florida strain fish, or other crosses beyond the first generation (e.g., the offspring of two F1 fish would be F2 fish, and these don’t show enhanced growth rates). However, that first generation cross (F1s) do tend to grow faster (and maybe get larger) than largemouth bass currently swimming around in our lakes. The idea behind stocking these fish is we want to try to enhance the trophy fishery component in our big lakes. If we can get fish to a trophy size faster, then theoretically there will be more trophy-sized fish in the lake. Additionally, if F1 fish can get a little larger than wild fish, we might see some bigger fish coming out of these lakes as well. We don’t know it will work this way, which is why we are doing this on an experimental basis.

Why are some water bodies stocked with F1s, while others aren’t?

The biggest reason is that we don’t know if this will work. We currently do not have the hatchery resources to produce our own F1 largemouth bass, so we have to purchase them from the private sector. This isn’t particularly cheap. If the stockings do work, then we’ll look to expand the program to other lakes. If it doesn’t work and our results do not meet our goals for the program, then we will have learned what we needed at a reduced cost for the study. We are doing this on enough lakes (five of them) to get a good picture of the success rate, while still being relatively conservative with our budget. In short, we are stocking just enough lakes to make this a viable experiment, and not wasting money with overkill.

We’ve picked a wide enough variety of lakes across the state to get a good picture of how well this might work, and allow us to plan for future efforts should it prove successful. Conversely, if the whole thing doesn’t work, we won’t have spent license money where we didn’t need to.   Ultimately, this pilot program should allow us to evaluate the success of this management tool. If we achieve our goals for the program, then we can look to expand it in the future.

Do F1 largemouth bass have the potential to harm established bass fisheries?

We don’t think so.  From a genetic standpoint, all of our largemouth populations are a mix of Northern and Florida genes (in various proportions). Based on the rather extensive amount of genetic testing we’ve done, we don’t have any “pure” largemouth populations anywhere in the state. So, we don’t expect any genetic impacts to our largemouth bass from these stockings. Beyond that, we also do not anticipate any negative impacts to established fisheries based upon competition between stocked and wild fish. We are deliberately stocking low numbers of F1 fish, which is the only way this program is affordable and sustainable. Given that we are stocking at low densities, we don’t expect any competitive impacts with wild fish.

Will I catch more bass in lakes where you’ve stocked F1s?

Probably not. The idea behind this program is to target the trophy end of these fisheries. The better growth rates of F1 fish may show up as more 5+ lb. bass, but we’re still talking about a relatively small number of fish when you look at the entire lake population. As far as overall catch rates go, we are not stocking enough fish to really notice much of a difference in the numbers of 12”-18” fish. So, while we may see an increase in the numbers of really big fish, modest increases of average-sized fish won’t be detectable for most anglers.

How long will it take to determine whether this program worked or not?

Because we’re talking about trying to change the trophy aspect of these fisheries, we’re looking at 5- 10-year-old fish. Thus, it’s not something that we can evaluate in a couple of years. Under perfect conditions, we might start seeing some results in as few as five or sixyears, but it will be 10 to 12 years before we get a really good idea of whether this worked or not. Basically, it’s a long-term project that will require many years of monitoring on our part to evaluate its success or failure.

How can I tell the difference between a stocked F1 largemouth and a wild largemouth?