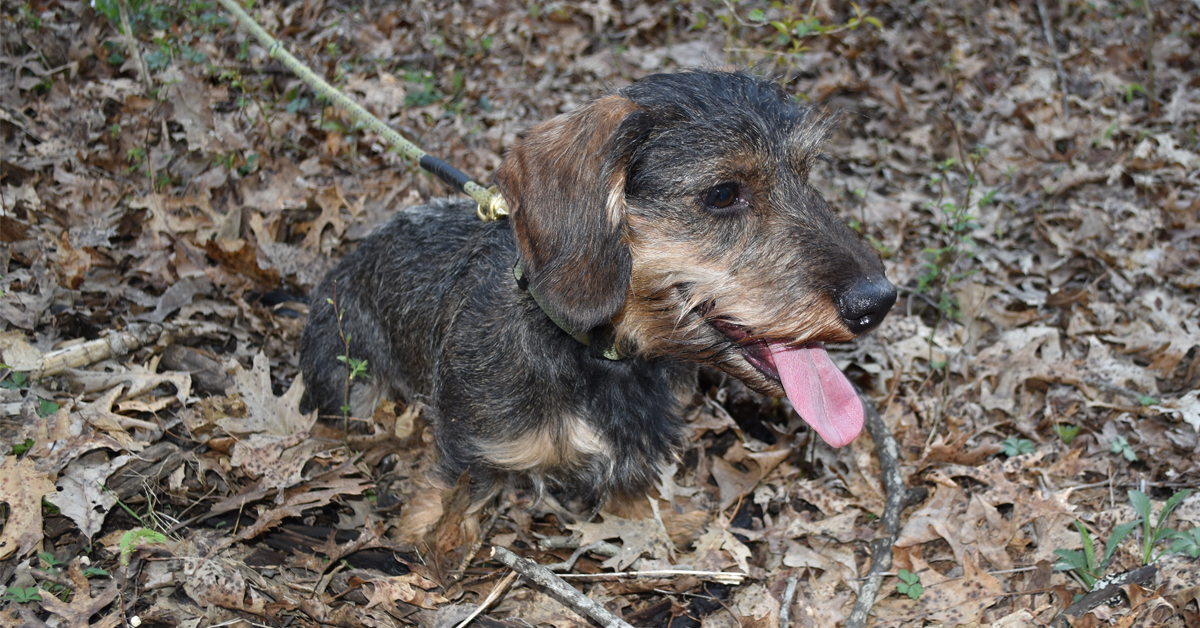 It was the third Saturday of this year’s urban archery season, and I was aloft in a tree stand overlooking a Roanoke County field. Not long before twilight, a lone doe appeared and I sent an arrow her way. After climbing down, I found the blood-covered arrow, but couldn’t locate a trail or determine where the whitetail re-entered the wood lot. With darkness about to descend and a warm night ahead, I called Blair Smyth, a former wildlife biologist for the Department of Wildlife Resources and now director of the Alleghany Highlands program for The Nature Conservancy. Smyth owns Enzo, a German wirehaired dachshund that excels at finding downed deer.

Smyth, of Daleville, Virginia, then asked me a series of questions about what I had just witnessed and that all deer dog trackers—and, of course, hunters—should ask. “What kind of blood was on the arrow?” How did the deer react when you shot it?” “Where do you think you hit the deer?” “Do you think the deer is down?”

I replied that crimson blood covered the arrow and that the doe had frantically run away low to the ground—both indicators of a heart shot. Also, that I thought I had heard the deer crash down. My fear, I explained, was that the woodlot was so dense and the night so warm that the meat might spoil before I located the animal. From talking with Smyth before, I promised not to follow the blood trail if I did find where the deer entered the woods—a mistake many hunters make that complicates a tracking dog’s efforts.

“Let me get my gear together and Enzo and I will be there about 20 minutes after that,” Smyth said. When he arrived, Enzo hopped out of the truck. I showed them the last place I’d seen the deer, and Enzo went to work. He located the doe minutes later. 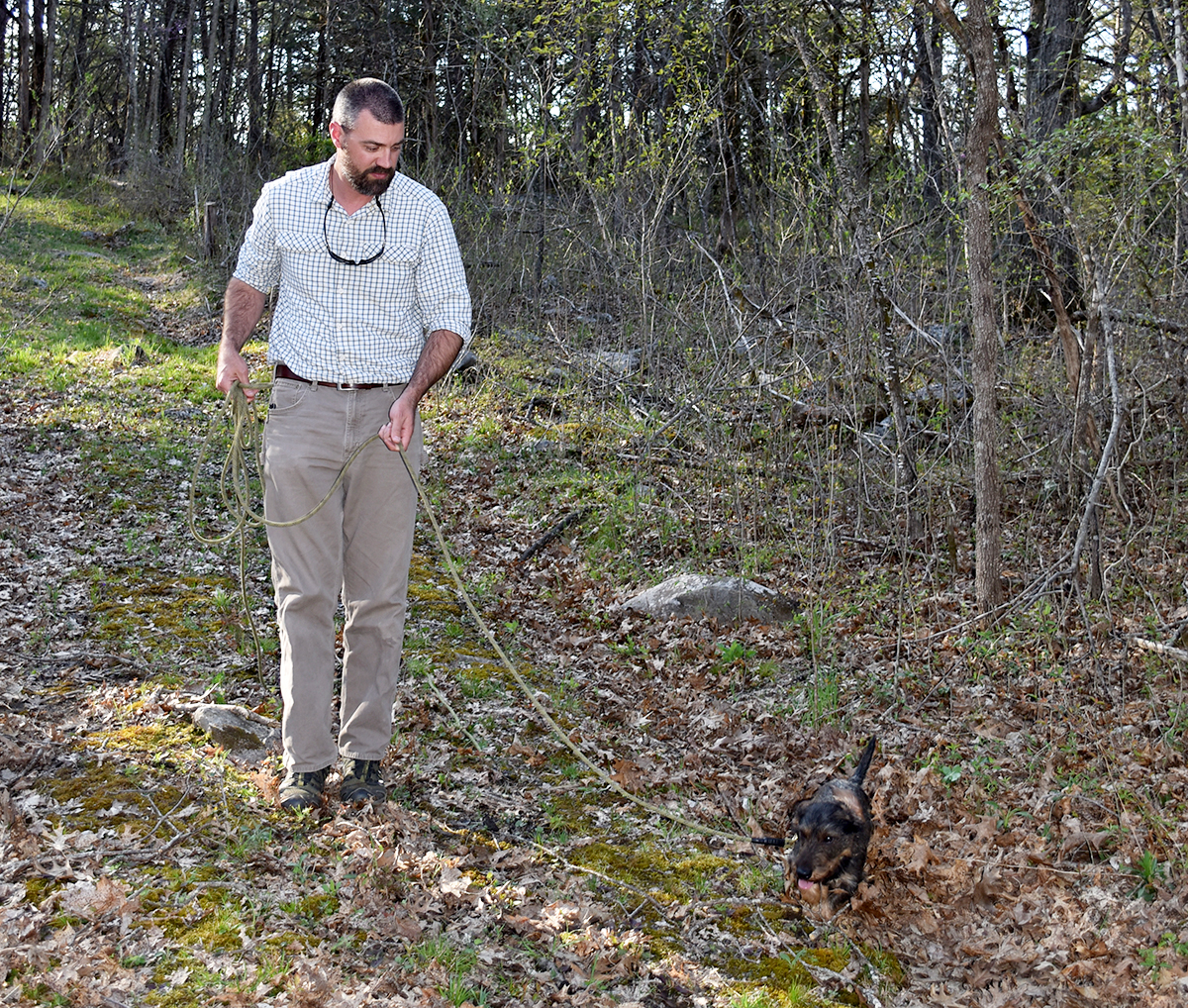 Since 2011, Virginia has allowed leashed tracking dogs to recover deer, bear, and turkeys, and it’s a service that’s a win-win for hunters, according to Smyth. “It’s all about not leaving them in the woods,” he said. Any dog can be trained to track game, but Smyth feels that German wirehaired dachshunds especially excel because of their desire to please, excellent noses, and their small size (averaging 18 pounds or so), which makes them easy to control on a leash and adept at winding their way through dense thickets.

Smyth first grew interested in blood-tracking dogs a few years ago when he couldn’t find a bear he’d shot. “I looked for him for three days and never found him,” Smyth said. “The next year, a friend of mine shot a bear and couldn’t find it. So we paid a guy from North Carolina to come up with his dog. That dog did in five minutes what it took us five hours to do. It was like he was just running through the woods looking at flagging tape. I thought, ‘That would be something that would be handy.’ That made me start thinking about getting a dog, so I talked to people and learned about it. And I ended up doing it.”

Smyth bought Enzo, who is now 3 1/2, from John Jeanneney, the founder of Deer Search Inc., in New York and a breeder specializing in blood-tracking German wirehaired dachshunds. “They had trained him some as a puppy, but when I got him, I started laying trails using deer blood and hooves,” Smyth said. “I started pretty easy at first, short trails and easy ones. I’d let him work them, and I have a piece of hide that I let him chew on as a reward at the end of the trail. I just made the trails progressively longer and harder, but then also let the scent get older. Instead of having it be a two- or three-hour track, I’d let it age 12 hours or 24 hours and then let him try and figure it out.”

Enzo, who is named after the famous car driver and founder of Ferrari, fits right into Smyth’s family, hanging out on the couch watching TV and playing with Smyth’s daughter. “He’s a house-dog pet, but when he sees me put on a pair of Carhartts or get my tracking stuff out, he kind of loses his mind. He knows it’s time to work,” Smyth said. “He’s always really excited about it and seems to really enjoy doing it.” 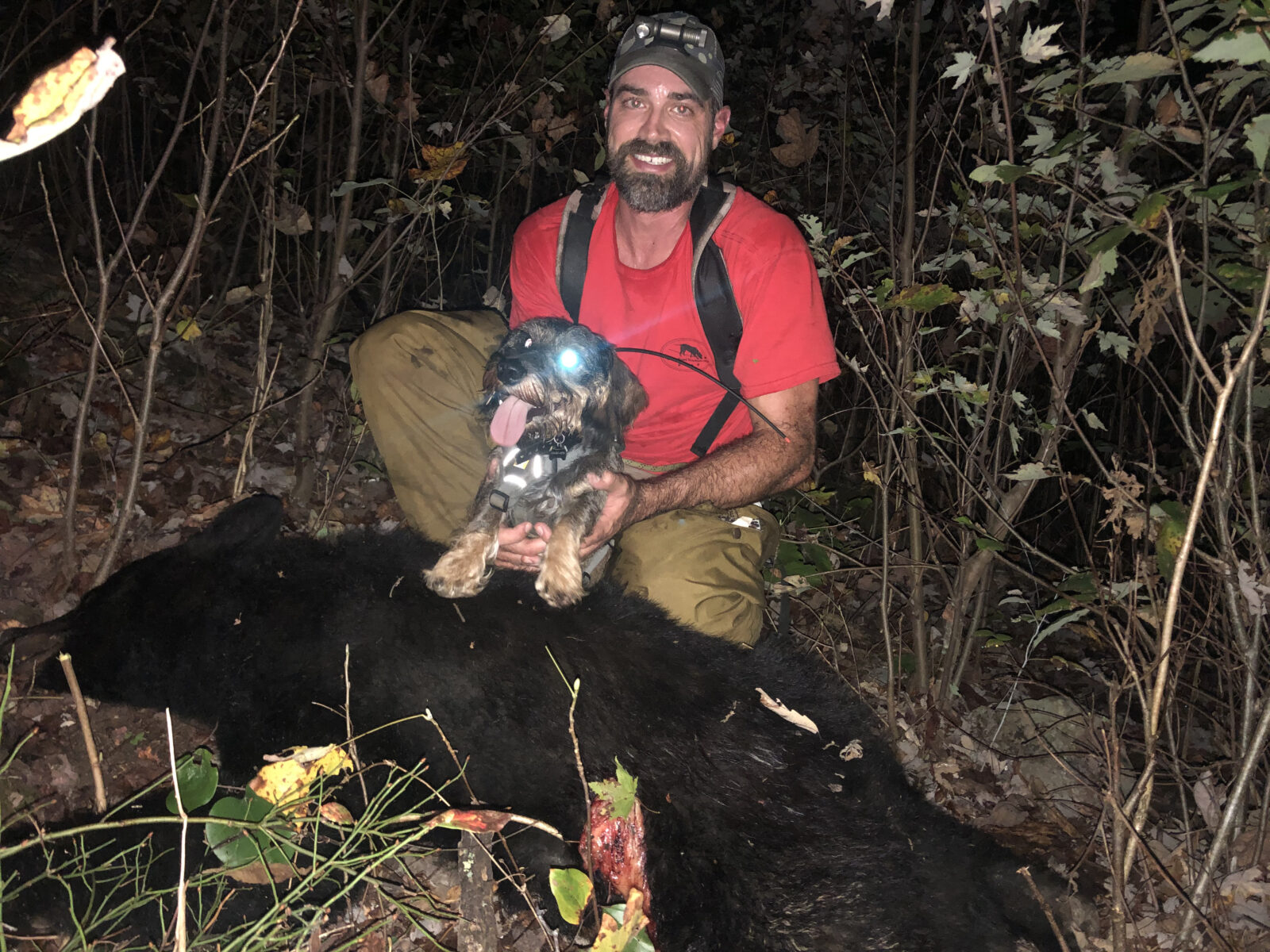 Enzo and Blair Smyth with a bear they helped locate. Photo courtesy of Blair Smyth

Smyth tries to keep his range of tracking calls to within a 90-minute travel radius of his Daleville home, and he doesn’t charge for his services. “If someone wants to give me a tip, I’ll take it, but I don’t charge to come help. For me, it’s all about recovering deer or bear that wouldn’t be recovered and watching Enzo work,” he said. “Sometimes we’re able to track them and figure out it’s not a fatal hit. That does happen. But it gives the hunter some peace of mind, an outcome.” 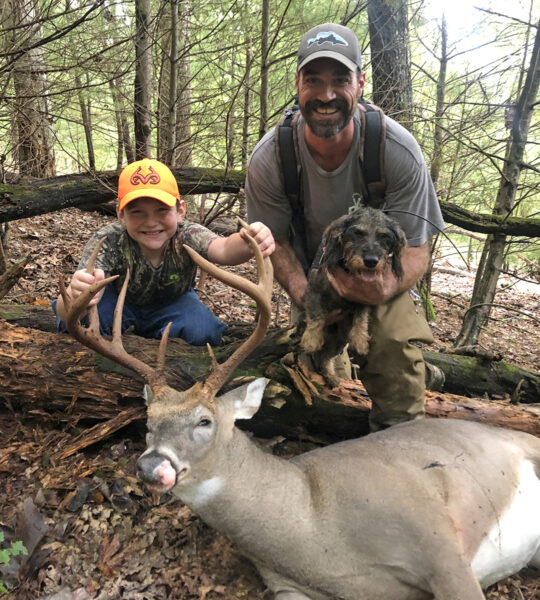 At what point should a hunter consider calling in a blood-tracking dog for assistance?” If they don’t hear the deer crash, that’s a good sign that they didn’t have a great hit,” Smyth said. “If they know it’s a gut shot or a back hit, those are the ones that are easier for a dog to track because they leave a lot of scent even if they don’t bleed much. If a hunter follows the blood trail 100 yards and then blood starts getting spotty or hard to find, definitely give somebody a call. The other thing people could do is get some flagging tape, mark where the deer was standing, and mark the known blood trail. That makes getting a start much easier.

“The thing I want hunters to know is that if they’re unsure about their shot, to back out and give the animal time, whether they’re calling for help in tracking them or not,” Smyth said. “If you track too soon, either with a dog or without, you can jump them up and then they get really hard to find.”

United Blood Trackers, a national organization promoting the use of trained tracking dogs in the ethical recovery of big game, currently lists 13 trackers offering services in Virginia. Smyth said there are other trackers in Virginia who also offer services and can be found through Facebook groups.

Bruce Ingram has written books on the James, New, Potomac, Shenandoah, and Rappahannock rivers, plus Living the Locavore Lifestyle and four young adult fiction novels. For more information, contact him at bruceingramoutdoors@gmail.com.