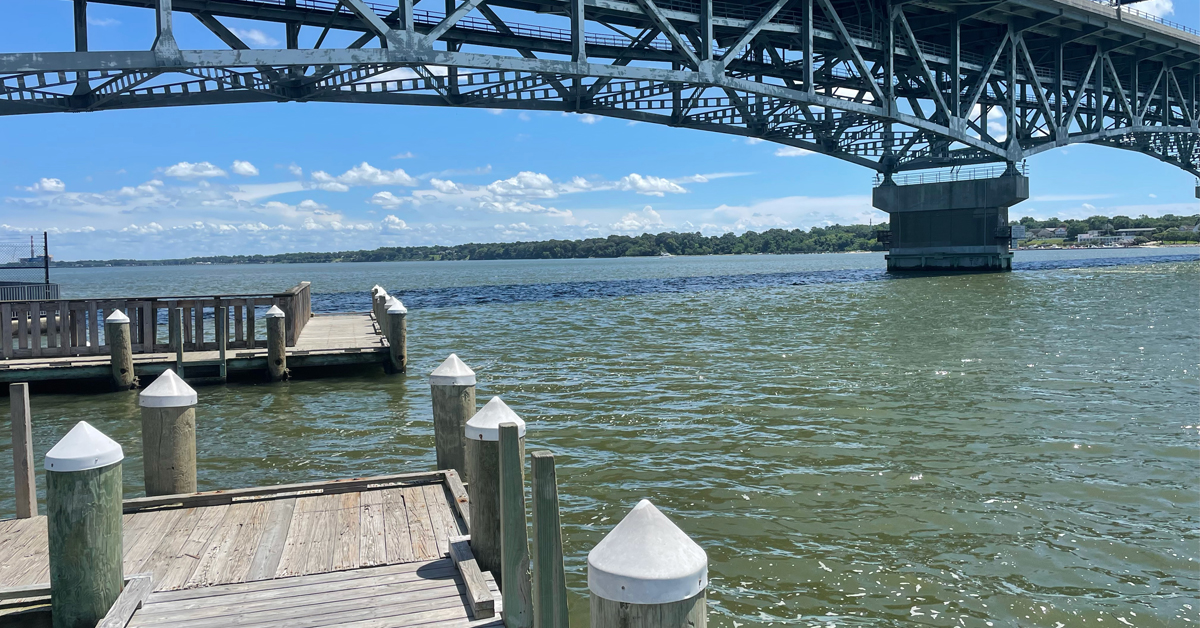 A narrow spot near the mouth of a navigable river is always a strategic location, for multiple reasons. No surprise, then, that English colonists fortified Gloucester Point on this 0.45-mile-wide pinch point in the lower York in 1667, and it played roles in both the Revolution, because it lies opposite Yorktown, and the Civil War.

Today, it is still strategic, as the home of the Virginia Institute of Marine Science (VIMS), the College of William & Mary, and Gloucester Point Beach Park, where the Department of Wildlife Resources (DWR) maintains two double, concrete launch ramps to go with the beach, fishing pier, picnic shelter, and bathrooms operated by Gloucester County.

The park sits 60 miles from downtown Richmond via Interstate-64, at the north end of the George P. Coleman Memorial Bridge over the York. The bridge’s toll ($3.00 with single-axle trailer) is well worth the easy drive from Richmond and points west like Charlottesville, as well as up Route 17 from Newport News and Hampton. You can learn a lot from the county’s The Point Walk brochure.

There’s a lot to see from the water here. The twin swing spans of the Coleman Bridge and the 90-feet-deep channel beneath it allow Ticonderoga-class U.S. Navy cruisers, Spruance-class destroyers, and U.S. Coast Guard cutters to enter the river and travel to the Yorktown Naval Weapons Station & Cheatum Annex of the Naval Supply Depot just upriver on the south (York County) side at the common mouth of King and Feldgates Creeks. Directly across from Gloucester Point is Yorktown, best known for its role in the Revolution with the surrender of British General Lord Cornwallis and his troops in October 1781, but it was also Virginia’s largest tobacco port in the mid-18th century.

Today, the National Park Service operates the Yorktown Battlefield as part of the Colonial National Historical Park. The Yorktown waterfront offers a marina, restaurants, and hotels. It’s also the home of The Watermen’s Museum. Just to the east is the Coast Guard Training Center Yorktown at the mouth of Wormley Creek. The lower York is about 2 miles wide, and the distance to the open Chesapeake is about 6 miles.

So what is there to do in a boat launched at Gloucester Point? Obviously, sightseeing is high on the list, though the waters close to the military installations are prohibited zones, and no small boat has any business getting close to a naval ship, whether tied up or underway. However, it’s exciting to “walk the battlefield” afloat around Yorktown and try to imagine the scene of French Admiral de Grasse and his fleet keeping the British fleet at bay while Generals Washington and Rochambeau bottled up the British at Yorktown. 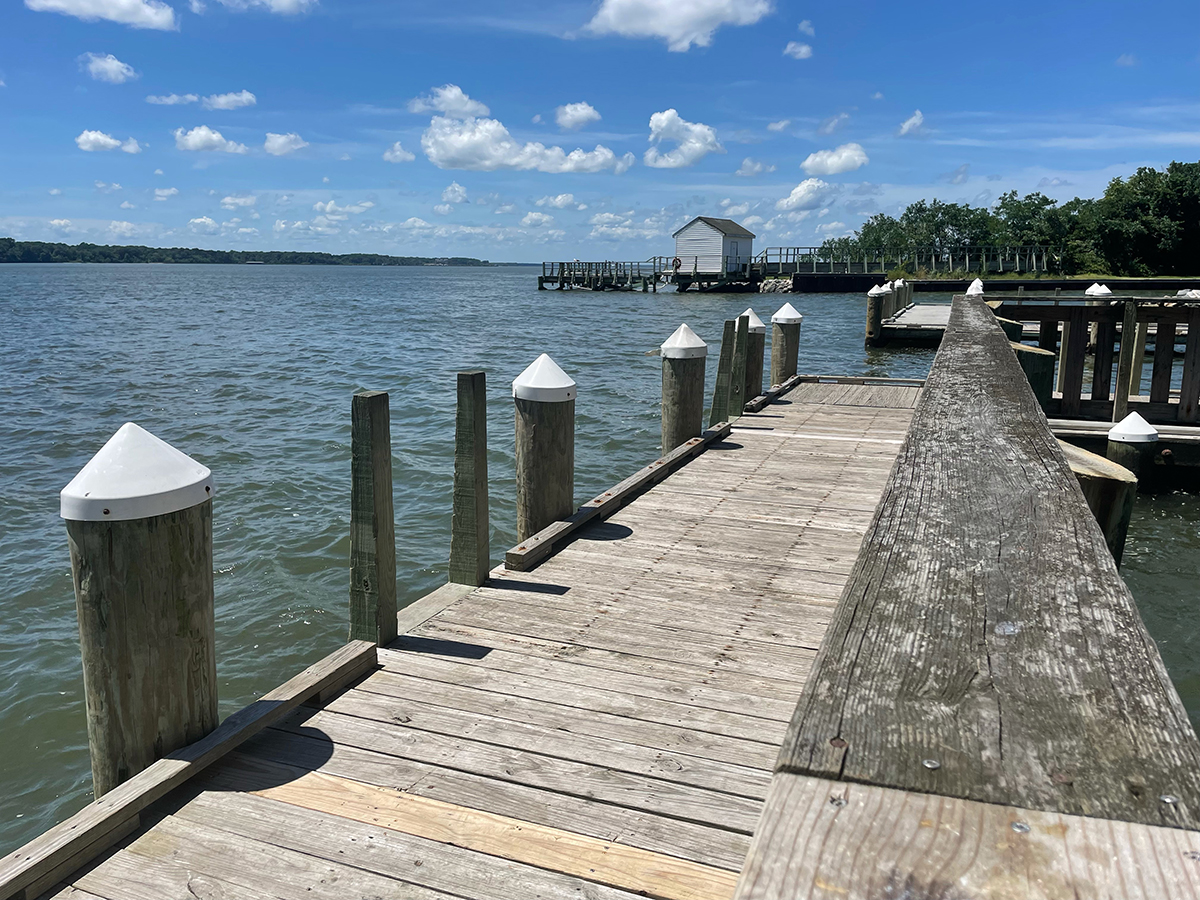 Fishing? Oh, yes, plenty of opportunity there too. The north side of the lower York is one of Virginia’s targeted tributaries for oyster restoration. Look closely at this map from the Virginia Marine Resources Commission’s Conservation & Replenishment Department for the location of oyster leases and sanctuaries (note that both are shades of brown) below and above the Coleman Bridge on both sides. The shell bottoms and three-dimensional reefs are all prime fish habitat in 8 to 20 feet of water, within a four-mile run from the Gloucester Point ramps.

Use your boat’s fishfinder to locate shell bottom and if you see fish, try to jig on them. Other options include bait fishing with shrimp, squid strips, peeler crab chunks, or bloodworms on bottom rigs while drifting or anchored on an underwater ledge or point. The species available in these high salinity waters include spot, croakers, gray trout, black sea bass, flounder, and rockfish. Be sure to check the regulations and note the Marine Resources Commission’s fishing license requirements.

Another great fishing option around Gloucester Point is casting to shoreline structures for speckled trout, puppy (red) drum, and rockfish. Within 4 miles in either direction, there are creek mouths, living shorelines with stone breakwaters, and marsh points that create eddies and holes to fish from a shallow-draft skiff or a kayak. There are some underwater grass beds (submerged aquatic vegetation [SAV]) in the area as well. You can look for them in the most recent report from the VIMS SAV Monitoring & Restoration Program. The usual assortment of topwater plugs, twitchbaits, soft plastic lures, bucktails, and weedless spoons are all effective at times.  One good trick in these waters is to hang a jig 12 to 24 inches below a rattle float or popping cork.

On these broad waters, though, always wear a life preserver and observe all boating safety practices. Be careful of weather and note that the York River lies roughly northwest/southeast, so it funnels wind in both directions. Currents are especially powerful around the Coleman Bridge, and when the water is running against the wind, conditions will be especially rough. This is a wonderful area for Exploring the Wild, but be careful and stay safe.