Exploring the Wild on the Mattaponi from Aylett 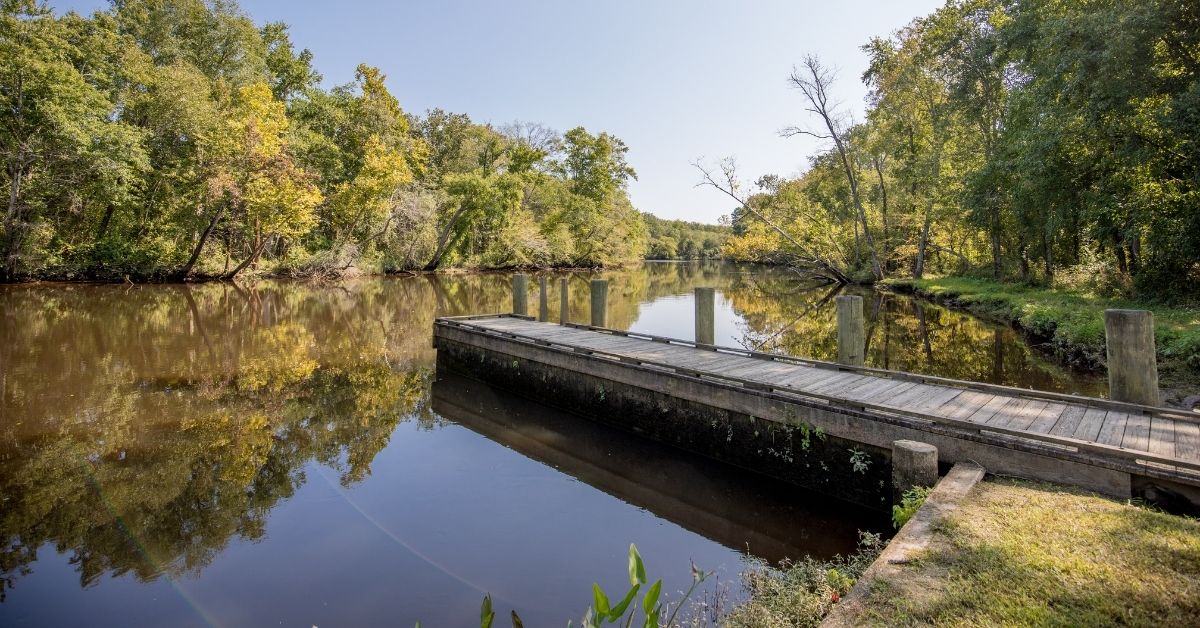 Most people know Aylett simply as a village where Route 360 crosses the Mattaponi River on the way from Richmond to Tappahannock and the Northern Neck. Even if they are towing boats, few stop. They don’t know what they are missing. If you’re looking to explore the wild, this river is a jewel.

The Mattaponi rises as four branches, the Mat, Ta, Po, and Ni, in the central Virginia woodlands of Caroline and Spotsylvania Counties. It flows east as a narrow, meandering stream for 20 miles to Aylett. The woodland soils catch and filter rain before releasing it gradually to the stream, so it tends to run clear, with a brownish cast from the tannin in leaves and needles. There’s enough flow through the year that fresh water pushes salt far downstream from the point where the riverbed reaches sea level at Aylett.

Though it’s narrow, the Mattaponi’s basin is shaped such that it has the strongest tidal currents and the tallest vertical tide change not just in Virginia but the entire Chesapeake system (about four feet on average). Even so, Aylett was a valuable port for grain and tobacco in the 18th and 19th centuries.

That’s hard to believe today. The unassuming entrance to the Department of Wildlife Resources Aylett Landing is only a hundred yards east of Rt. 360 on West River Road. It’s a one-lane paved road on the left, just before St. David’s Episcopal Church. The lane winds down to a parking area with a fishing pier along the riverbank and a concrete launch ramp with finger pier. The landing is on the outside of a curve, so the water is deep there. The river is about 30 yards across at this point, with wooded banks on both sides. In April, the landing is packed with shad fishermen, as the shad make their way upriver. 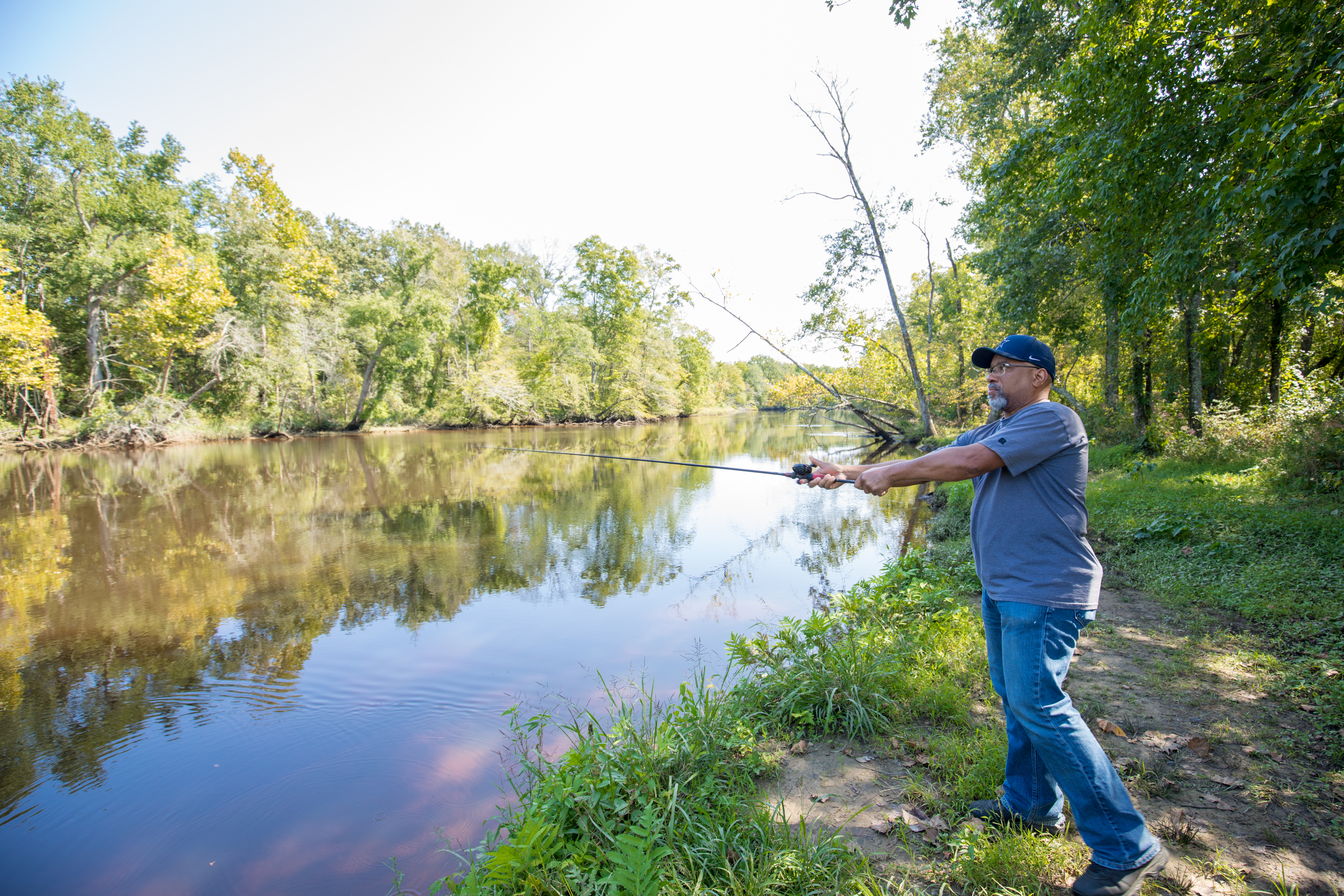 There are spots for bank-fishing at the Aylett boat landing.

Above Aylett, there’s enough depth for careful navigation in smaller outboard powerboats for several miles, but this is also great water for paddling a canoe or kayak. The current will be mostly downstream, though it pays to check the tide tables ahead of time. Figure that the flood (upstream) current, if any, will reverse to ebb about two hours after high tide at Aylett. If it is flooding when you arrive, paddle upstream with it as far as you want, then turn around and ride it back on the ebb. For the past 500 years and more, this part of the Mattaponi has been the domain of the now-federally recognized Upper Mattaponi Indian Tribe, who have treated it with great respect. 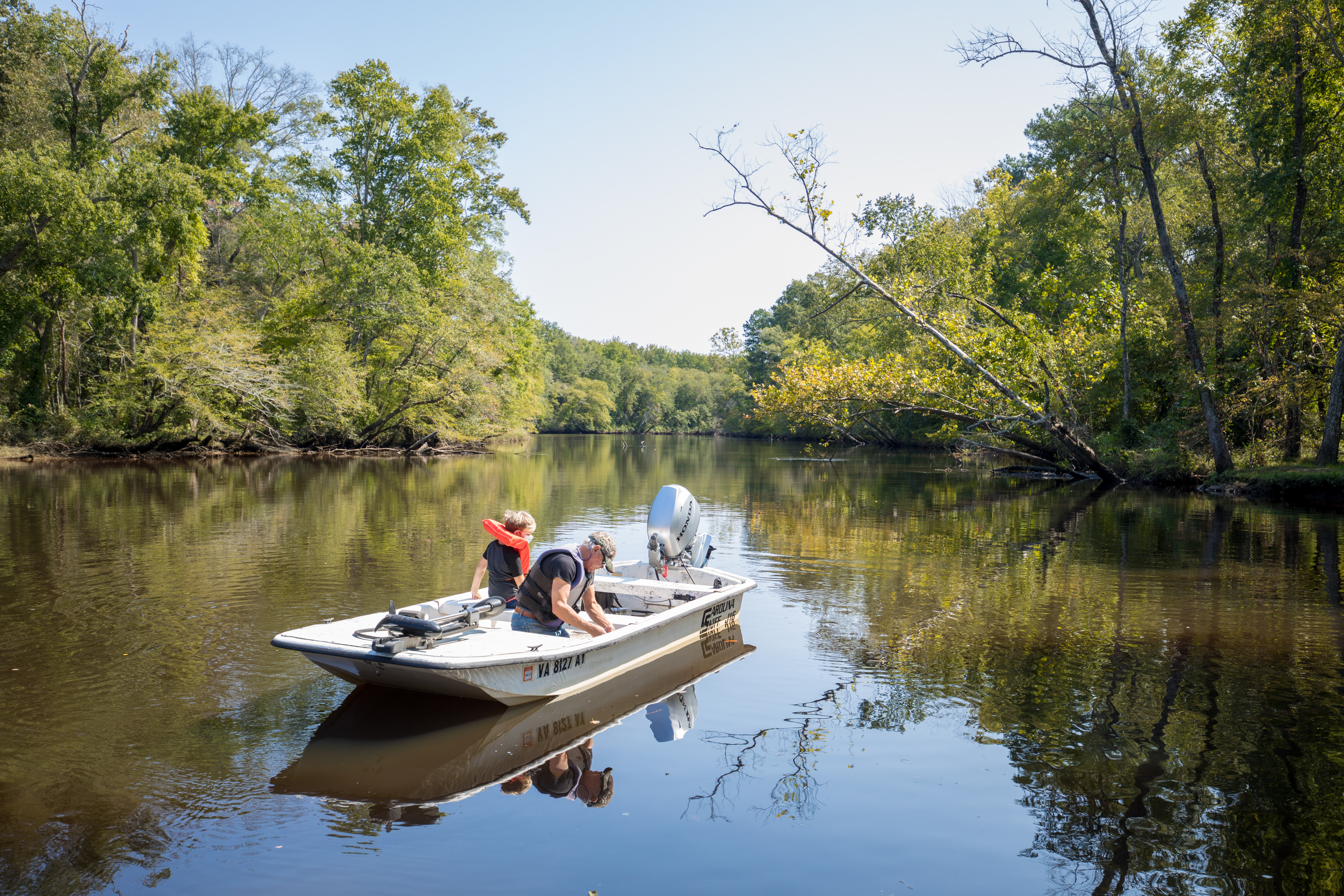 The Aylett boat landing is a great spot to launch for exploring the Mattaponi River.

One popular alternative, if you’re paddling with someone else, is to set up a shuttle by leaving a vehicle at Aylett and then driving a short distance up to Zoar State Forest to launch on Herring Creek. Zoar State Forest is also a stop on the Mattaponi loop of the Virginia Bird and Wildlife Trail. The creek flows into the Mattaponi about four miles above Aylett, so the trip makes for an easy, meandering float through wooded bottomland and marsh. It’s a good opportunity for birding and fishing, especially in the spring when songbirds are nesting while yellow perch, white perch, and hickory shad are running up to spawn. Later in the year, this part of the river is home to those perch, plus crappie, bream, and largemouth bass. 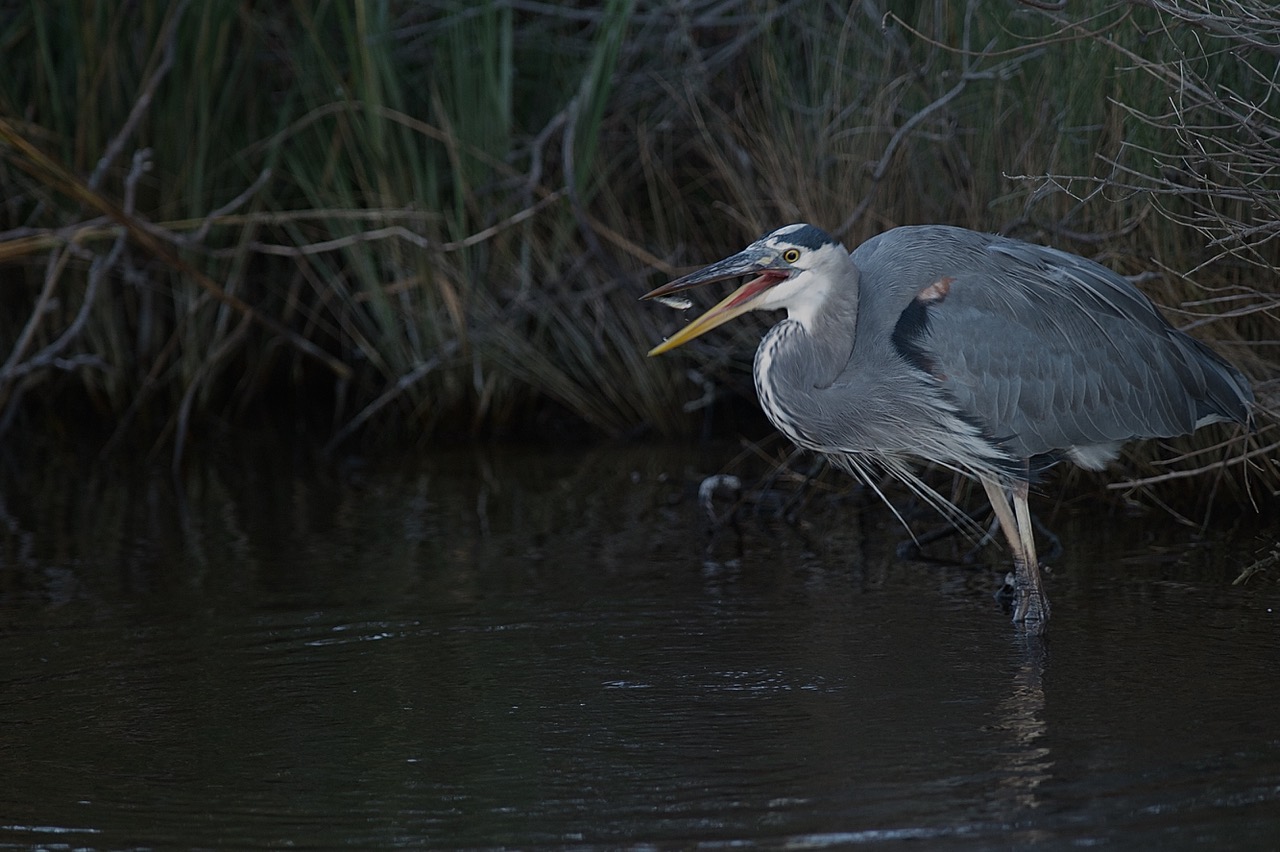 You can do some excellent wildlife viewing while on the water on the Mattaponi River. Photo by Bill Portlock

If you choose to explore downstream from Aylett, pay attention to the tide level and current, whether you’re paddling or running a motor. Remember that the deepest water will be on the outsides of the curve, some of which have remarkably steep banks. Several of these were historic landings with houses built in the 18th and 19th centuries. The high bank at Rosespout, a couple of miles downstream, allowed 18th century captains to bring their vessels close to the bank, where local farmers could pour their grain down a wooden pipe (“spout”) into the holds for shipping to Washington and Philadelphia.

Below Rosespout, the Mattaponi stretches out into two longer reaches past the old estates of Bewdley, Canterbury, and Whitehall before making a tight turn just ahead of reaching the village (and old port) of Walkerton. There’s a private launch ramp there, with a modest fee that benefits the local fire and rescue squad. It makes a good take-out for paddling down from Aylett (but plan around the tide if you take this trip—I speak from hard experience).

In this section, the Mattaponi gathers flow from several tributary creeks, so it widens out and begins to grow rich tidal fresh marshes dominated by lily pads on the edges with wild rice and other seed-bearing plants in the interior. These marshes don’t begin growing until late April, so it’s hard to tell where their underwater edges are early in the year, but later on, they will serve as useful markers for the edge of the channel. By August, they will be bursting with wildflowers and seeds, a veritable food factory for resident and migratory birds through the coming fall and winter. Look also for waterbirds, especially bald eagles, ospreys (in season), and great blue herons. 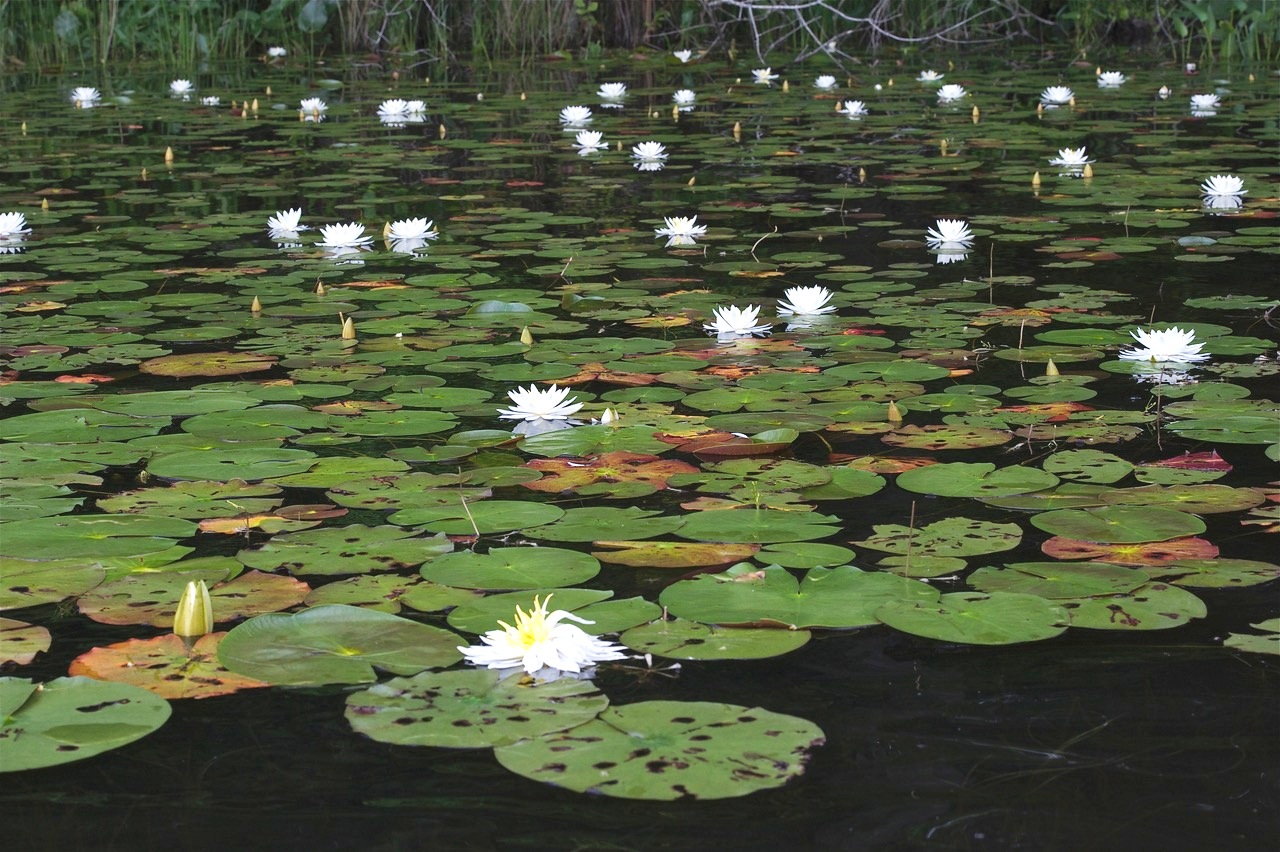 The lily pads on the edge of the marshes on the Mattaponi. Photo by Bill Portlock

Fish in this section include locals like white perch, yellow perch, crappie, bluegills (bream), and largemouth bass. The latter will mostly be feisty 10- to 13-inchers, but there are some larger ones up to 18 to 20 inches and four pounds. In cold weather, these fish will stack up around the river’s deep holes, but in warmer weather, they will spread out around shallow fallen trees, coves, and marsh edges.

In general, the best fishing will be on a falling tide, which draws them toward the channel and concentrates them. Remember that most of these predatory fish will look for eddies on the edge of the current, where they can rest but still dart out to ambush prey being swept past. Good baits include live minnows, spinners, spoons, blade baits, jigs, and flies like the Clouser Deep Minnow. In the lower part of this section, there are also some blue catfish. Use cut bait, especially mud shad, for larger specimens. Smaller blue cats in the 15″-25″ range (the best for eating) will come to earthworms, bloodworms, and pieces of shrimp. The lower river also serves as a spawning ground for rockfish (striped bass) and Atlantic sturgeon.

For centuries, the tidal/fresh section of the Mattaponi has provided a bountiful living for forest, wetland, bird, wildlife, fish, and human communities, all intertwined and interdependent. Who knew there was some much to see and do around that unobtrusive village and bridge? Now you do! Next time, take the boat of your choice and explore it.