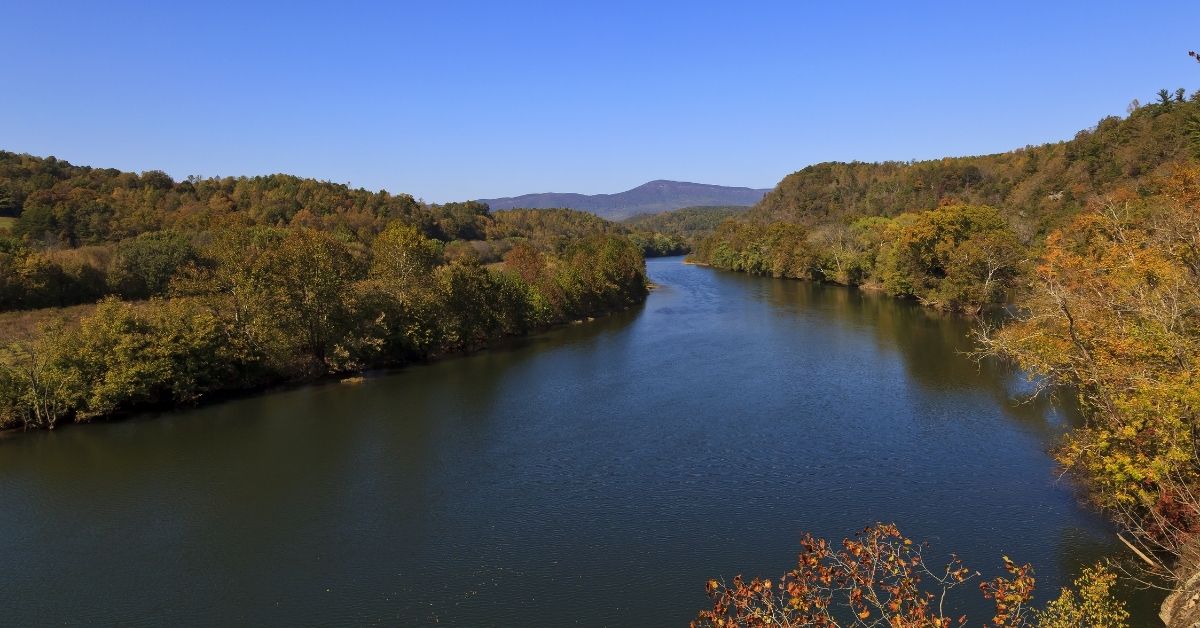 Osborne Boat Landing lies in a transition zone on the upper tidal James River. There’s no better place to launch for anyone who wants to explore what this river has meant to humans for at least the past 500 years. The landing is located Henrico County’s Osborne Park but belongs to and is managed by Virginia’s Department of Wildlife Resources (DWR).

The landing lies 10 miles downstream from the head of navigation at Richmond, where the James’ river bottom drops below sea level and tides begin to affect the water’s height. The city grew there precisely because ships could navigate to it, and when the English first visited in April 1607, there was already a Native American town, led by a son of the region’s Paramount Chief, Powhatan. The channel below is relatively straight, and the ebb current runs strong here, driven by flow from the James’s huge watershed, which reaches several hundred miles west to the edge of the Appalachian Plateau in Southwest Virginia. Even so, a rising tide in the lower river slows the flow enough that the river level rises according to the tide tables. 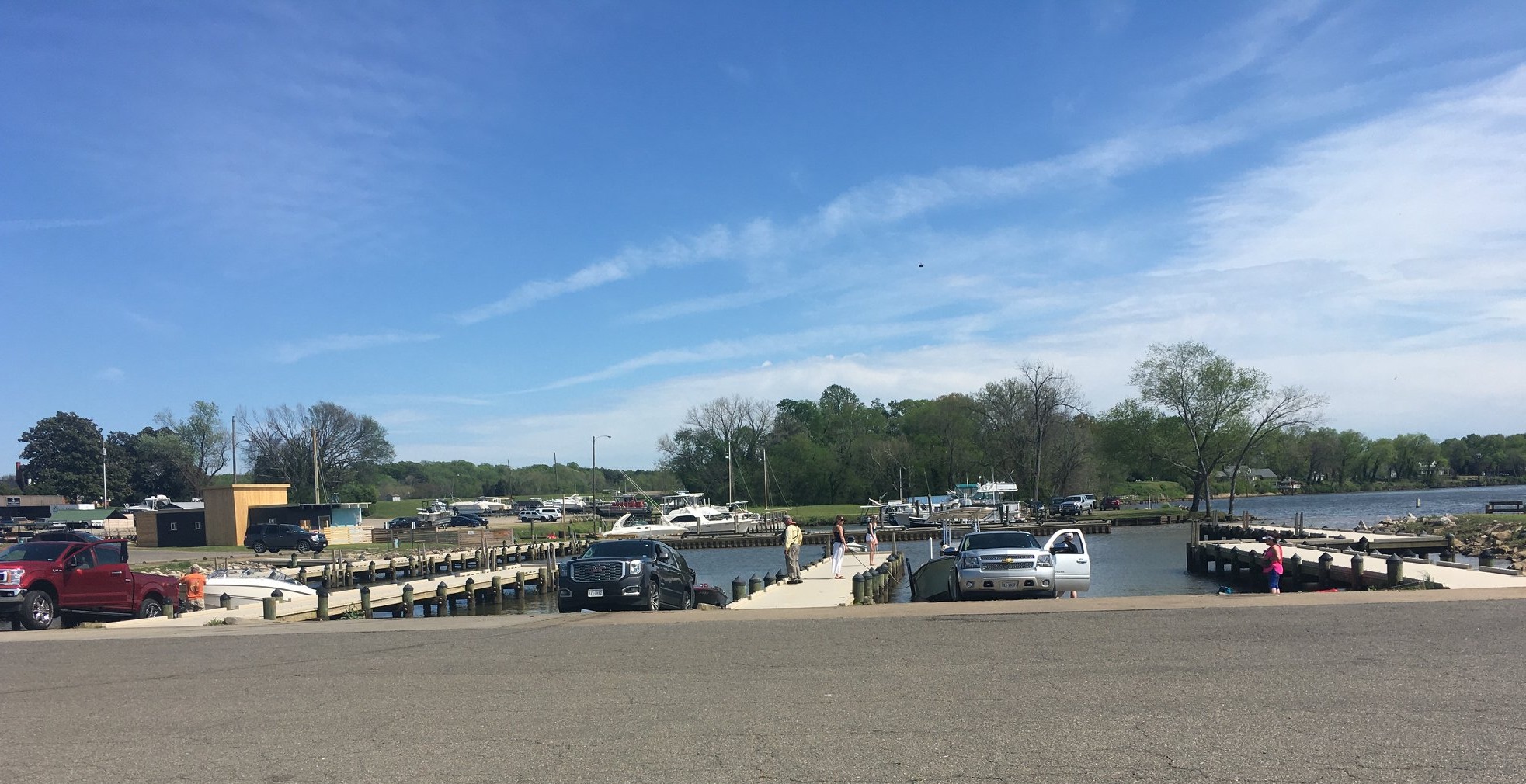 The boat landing at Osborne Park.

Below Osborne Landing, however, the river begins a series of six large, looping meander turns in which the current, like human runners going around a track, accelerates on the outsides of the curves and slows on the insides, causing bank erosion and sediment accretion (accumulation), respectively.

As on countless rivers and creeks the world over, the result is deep water next to fast (firm) land on the outsides of the curves and shallow water next to marshes and wooded swamps on the insides. That situation was ideal for the lifeways of the Arrohateck people who lived along it when the English arrived in the early 17th century, and the outsides of the curves served the English colonists well in succeeding years for building wharves to load ships with tobacco.

In those days, the river’s channel ran 19 miles down around the curves to the point where the James meets its largest tributary, the Appomattox, and widens out from 250 yards to a mile or more. In the 19th century, however, engineers cut shortcuts through the bases of three of those meanders to reduce steaming time for ships headed to Richmond. Today, the straight run to the Appomattox is only nine miles down the main channel. Even so, it’s well worth exploring the meanders, which remain rich with wildlife and history.

There was a time when exploring this part of the James was not so nice. Two centuries of land clearing, tobacco farming, 19th century agricultural practices, the Industrial Revolution, population growth, and rudimentary sewage treatment greatly fouled the river through the 1960s. Restoration began in the 1970s with the federal Clean Water Act. Over the past 50 years, though, federal, state, local, business, and non-profit partners have made amazing strides together, to the point that in 2019, the James received a prestigious international prize for river and watershed restoration.

So what is a good boat for exploring the James around Osborne Landing? Whatever you have, if you’re careful. Canoes and kayaks work well for exploration along shore in the immediate area. For example, a short distance downriver, there’s a cove on the Henrico (north) side that’s an easy paddle and worth investigating. It’s actually an old sand-and-gravel pit, mined long ago for local construction and now offering habitat for fish and birds. Experienced paddlers venture further afield, especially for fishing and birding. Outboard skiffs of 16′-23′, runabouts, and pontoon boats permit broader exploration, say up to the docks at Richmond or down through the meanders to the mouth of the Appomattox.

That said, understand that this is a powerful river, whose currents frequently run as strongly as two knots (2.3 mph), or about as fast as a novice paddler can move a canoe or kayak. Moreover, the channels wind back and forth, switching sides with the meanders. Inattention in piloting a powerboat can lead to hard grounding on sand or mud, a long way from shore. River traffic includes everything from high-speed bass boats to tugs pushing heavy barges. Attention to boating safety is crucial, especially the wearing of life jackets for all aboard. Need to brush up on boating safety practices?  Visit DWR’s Boating Safety site for refreshers. 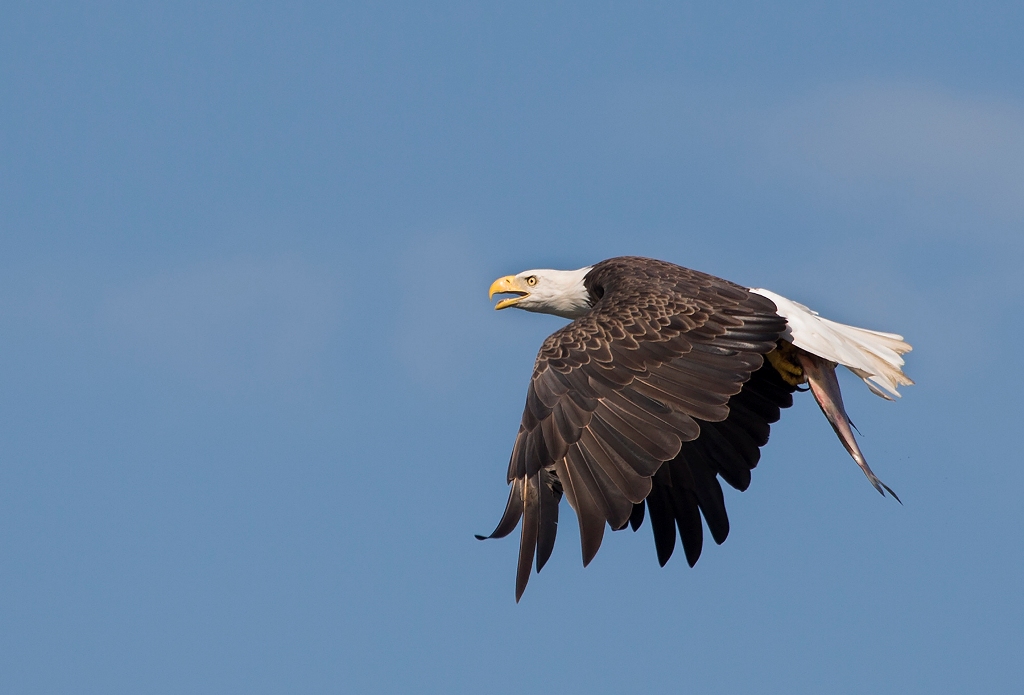 It’s not unusual to see bald eagles flying over the James River. Photo by Lynda Richardson/DWR

What will you see while exploring? Lots of bald eagles, for starters, both mature and immature, plus great blue herons and, in season, ospreys. The riverside woods and marshes provide superb habitat for them and others. For details, visit the Virginia Bird & Wildlife Trail’s Appomattox and Plantation loops. They offer driving directions on land, but they’ll provide plenty of hints for boaters as well. One particularly rich area is the meander around the Presqu’ile National Wildlife Refuge, just upstream of the mouth of the Appomattox.

Fish? Oh, yes, in gracious plenty. Residents include especially largemouth bass, black crappie, white perch, and blue catfish. In the spring, the James hosts strong runs of hickory shad, American shad, and striped bass. DWR offers an information guide to fishing the tidal James. In the fall, spawning Atlantic sturgeon may turn up anywhere from Presqu’ile to Richmond. These big fish are endangered and were once thought extinct in the James, but recent research indicates that their stock is recovering. If you hear a loud splash or see a large (5′-6′) fish breach (leap clear of the river), it’s a male sturgeon. Savor the experience, but be sure to keep clear of it. Here’s how to report a breach of that magnificent animal.

From the early 18th century through the 19th, a ferry operated from the site of today’s Osborne Park and Landing across the James to the village of Osborne on the opposite (Chesterfield County) side. Steamboats called there to unload and pick up cargo until World War I. This part of the river also saw action during the Revolutionary and Civil Wars.

With several million people living around the James, there’s plenty of restoration work still to do (and opportunities for volunteers who want to give something back). Even so, the James’ return to reasonable health is something to celebrate—by spending time on it. Go see for yourself.