Bring on the Bugs for Late-Summer Smallmouth 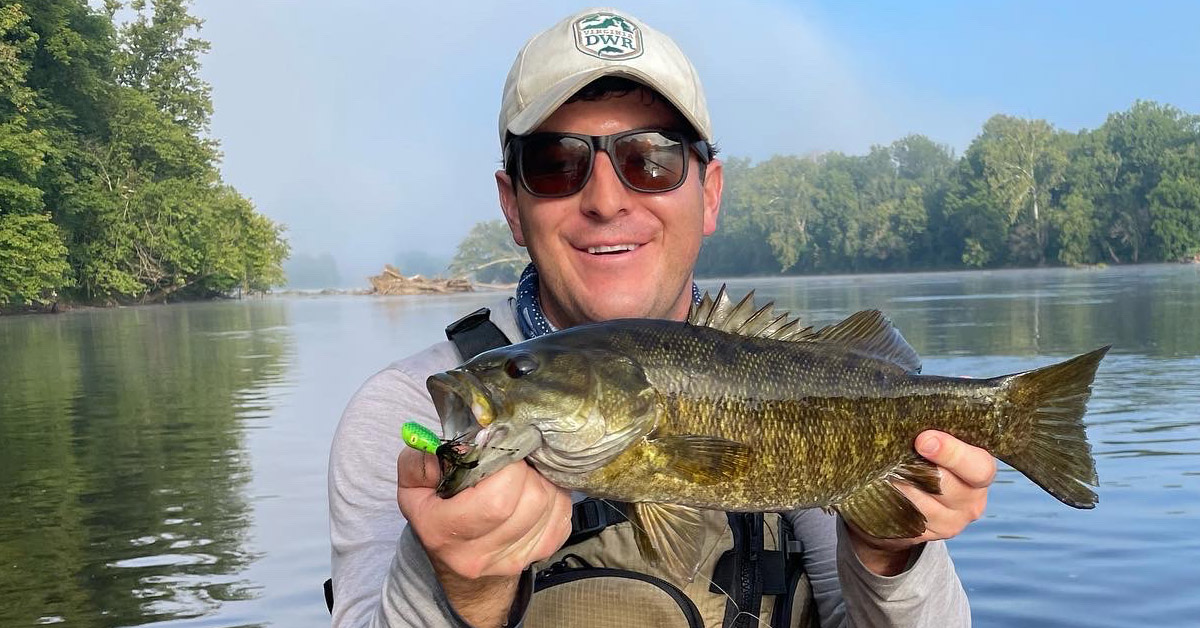 The author with a fine Virginia smallmouth bass that fell for a cicada imitation.

The chorus of cicadas echoes on a steamy late August morning. Sycamore trees are already starting to turn yellow as summer is nearing its end. Abundant underwater grasses undulate in the crystal clear flow of Virginia’s James River. It’s officially the ebbing of summer, a time frame that fly anglers cherish when it comes to sight-fishing for smallmouth bass.

In my opinion, the conditions in late summer and early fall favor the angler that approaches the river with a fly rod verses a conventional or spin fishing outfit. This time of the year is insect season on Virginia’s warm-water rivers and streams. While smallmouth will absolutely key in on aquatic hatches like damselflies and dragonflies, it’s the abundant terrestrial insects that get fly anglers so excited about smallmouth bass during this timeframe.

Low and clear water in late summer and early fall creates arguably the best site fishing conditions of the year. This, combined with a seasonal abundance of terrestrial insects, is the perfect combination for the fly angler looking to fool smallmouth on the surface. While forage fish and crayfish are staple food items for the smallmouth bass, dietary studies have shown that these omnivorous fish will be opportunistic when it comes to finding a meal. And opportunities are plentiful during the end of summer as terrestrial insects routinely find their way into the water.

Annual cicadas in Virginia might excite fly anglers the most when it comes to fishing terrestrials for smallmouth. Once soil temperatures get to approximately 65⁰F, annual cicadas will emerge from brooding underground, their exoskeletons left behind on trees and rocks as they enter the adult portion of their life cycle. This adult life stage only lasts four to six weeks and is the cicada’s chance to focus on finding a mate to start the life cycle over again. Males spend all of their time in the trees “singing” in an effort to attract a female to mate. When the adult portion of the cicada’s lifecycle is nearing its end, these insects can be seen falling and erratically flying towards the ground. Some of these green and black bugs inevitably land in the water, creating the perfect opportunity for a smallmouth to take advantage of a large and nutritious meal. 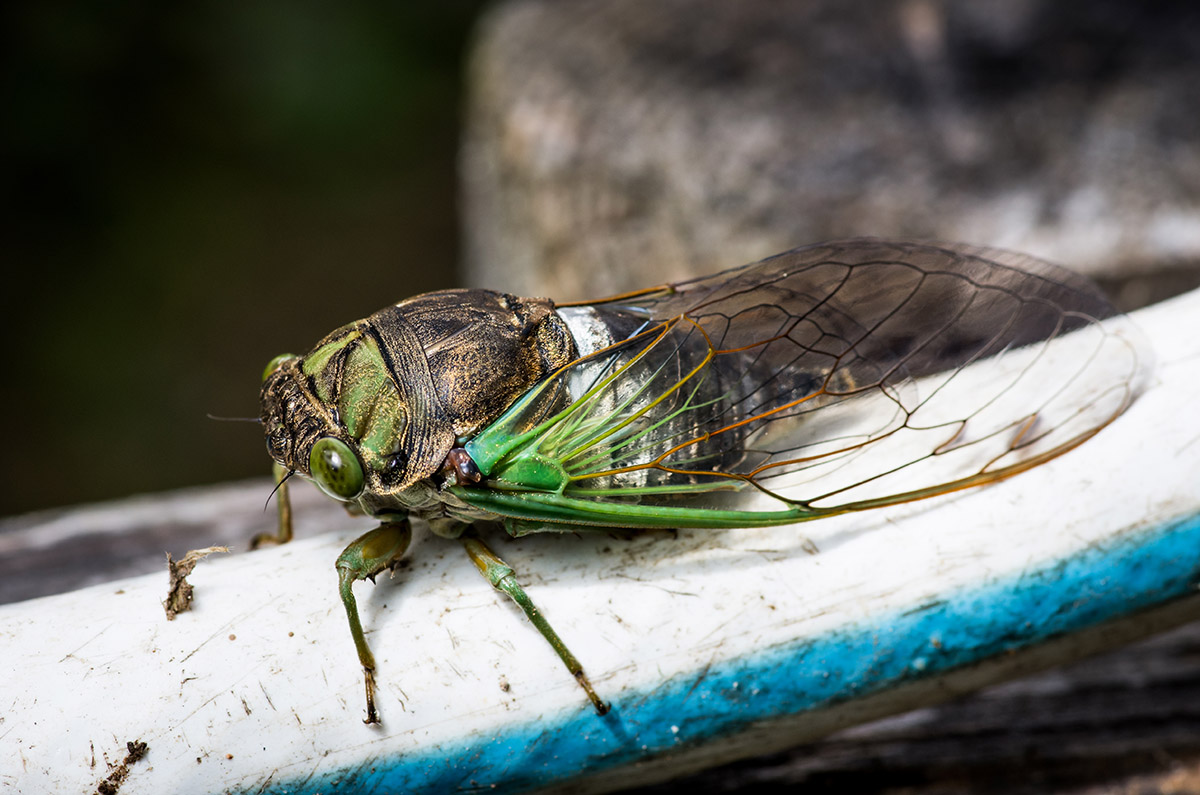 In Virginia, annual cicadas provide a large and nutritious meal for smallmouth bass. Photo by Shutterstock

In addition to cicadas, other terrestrial insects like Japanese beetles, grasshoppers, and crickets can also become an opportunity for smallmouth bass. A gust of wind can push these insects off the bank or out of trees and into the water. Rest assured, the smallmouth are keyed in on all of these opportunities. For the fly angler, success is dependent on paying attention to the scenario and approaching it accordingly, which involves picking the right fly for the right situation and executing the presentation.

For rods and reels, I prefer a heavy 6wt or 7wt fly rod with a floating fly line tapered for bass bugs. A 6wt or 7wt in the 9- to 10-foot range will have the backbone to turn over the larger surface bugs that produce eats during terrestrial season. A longer 9- to 12-foot leader tapered to 0x, 1x, or 2x will excel in low clear water. For fly selection, larger poppers that are green and silver and black will mimic the annual cicadas well. I like Boogle Bug poppers and the Surface Seducer Double Barrel Bass Bug Popper in the correct color combo for a cicada imitation. Large foam cicada patterns such as Rainy’s Ultimate Cicada Fly sporting a foam body with hackle, elk hair wings, and rubber legs will also work well. Additionally, foam beetle patterns and larger foam hopper patterns, like the Fat Albert and Chernobyl Ant, will also get the smallmouth’s attention. 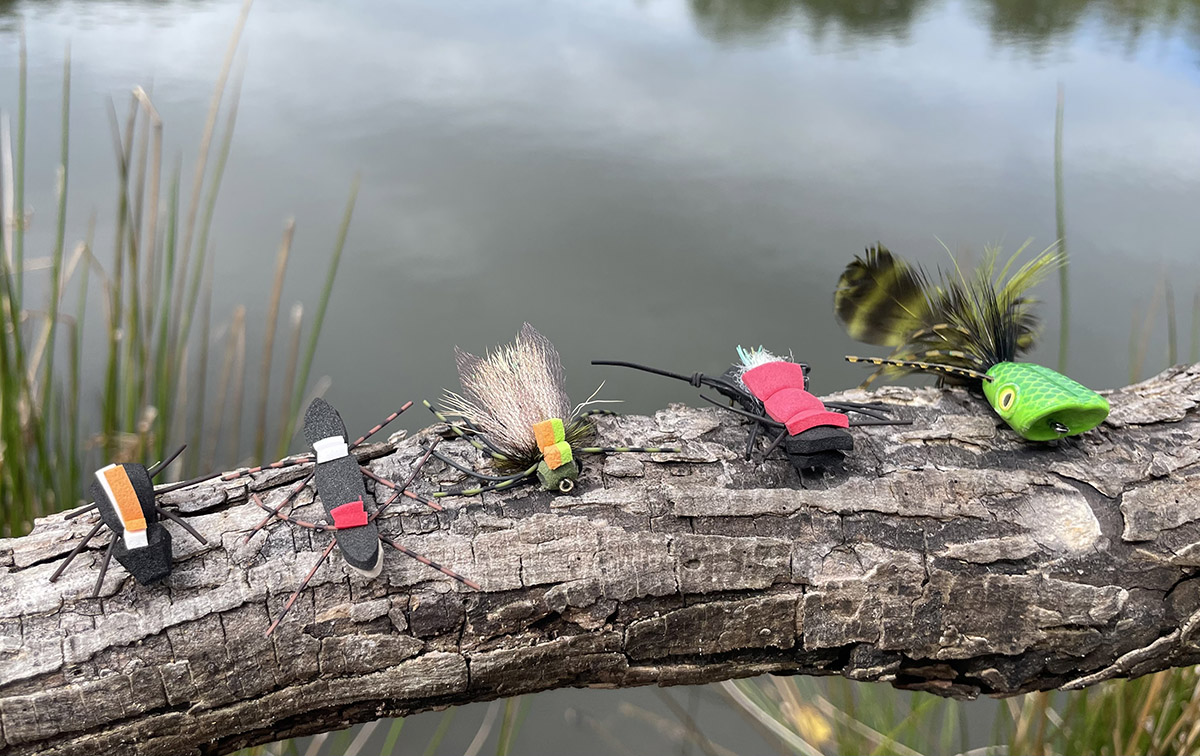 It’s All About the Splat

When fishing these terrestrial patterns for smallmouth, I often times try to splat the fly down on the initial landing. Deeper water under overhanging tree limbs near the bank is prime habitat to prospect. The fish are used to the splat these insects make when they hit the water, so making it loud and clear that your fly is on the water during the initial landing is key. I will often wait 10 seconds or more before I twitch or lightly strip the fly. I’ve seen smallmouth react to the splat and swim 10 feet or more to slurp the bug. Being patient after the fly initially lands on the water can produce additional strikes that otherwise might not have occurred. After waiting 10 seconds or more, a light twitch or strip to gurgle the fly is a great way to imitate a struggling insect on the water’s surface. 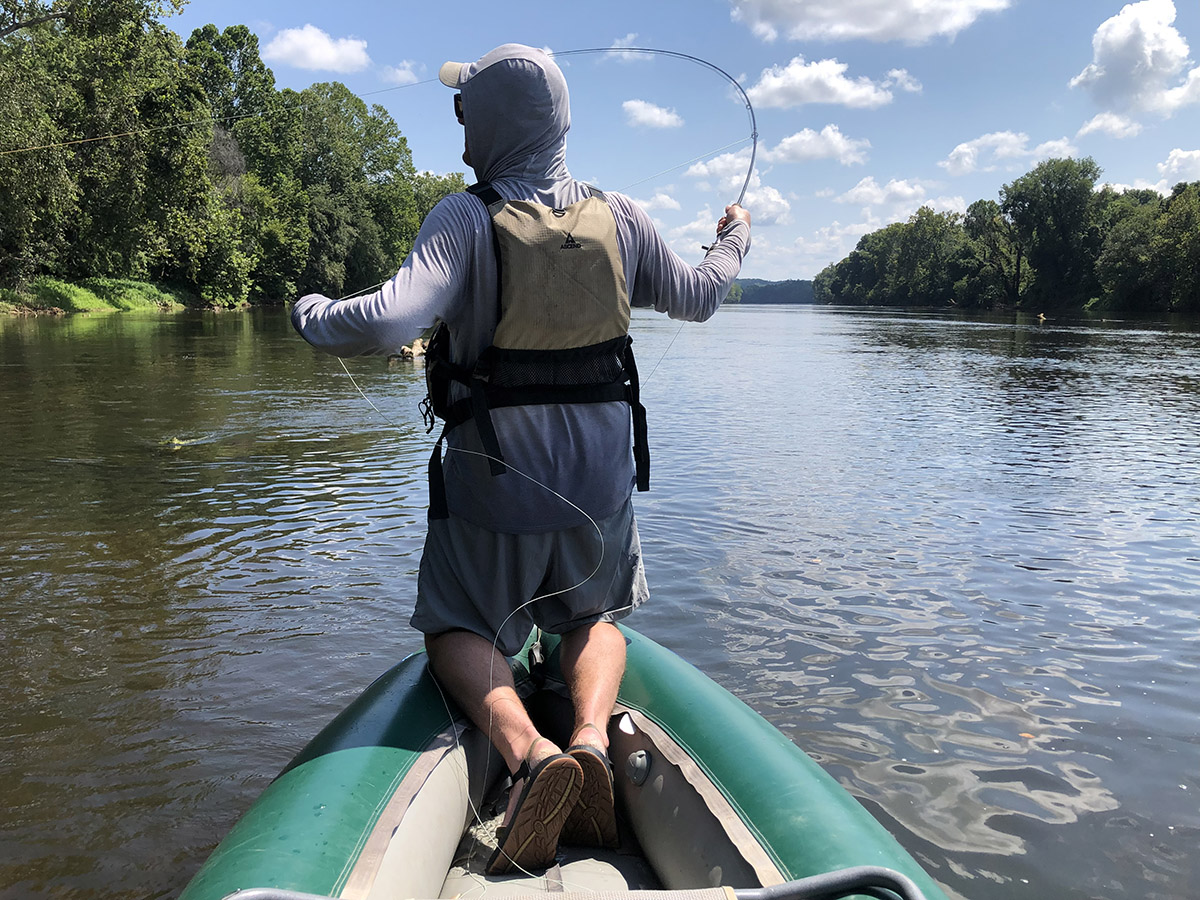 Long casts to the bank can be key when fishing terrestrials for smallmouth bass.

The fish will often times dictate how you present and retrieve the fly on any given day. In faster-moving water, you can take a more aggressive approach where it can pay dividends to be more delicate with your presentation than in flat water. The eats can also be just as variable. In flat water, the biggest smallmouth will often barely break the surface of the water as they delicately sip or slurp the bug down. It can be hard to maintain patience, but waiting until the fish has closed its mouth and turned is key for hooking up and not pulling the fly out of the fish’s mouth. The eats can also be fast and furious as well, especially in faster-moving water. Smallmouth can explode on the fly, making for exhilarating surface action.

Fly anglers that have never fished for smallmouth before but enjoy fishing dry flies for trout will be pleasantly surprised with smallmouth bass terrestrial action. This can be some of the most exciting fishing of the year and you might just develop an addiction for it like I have.