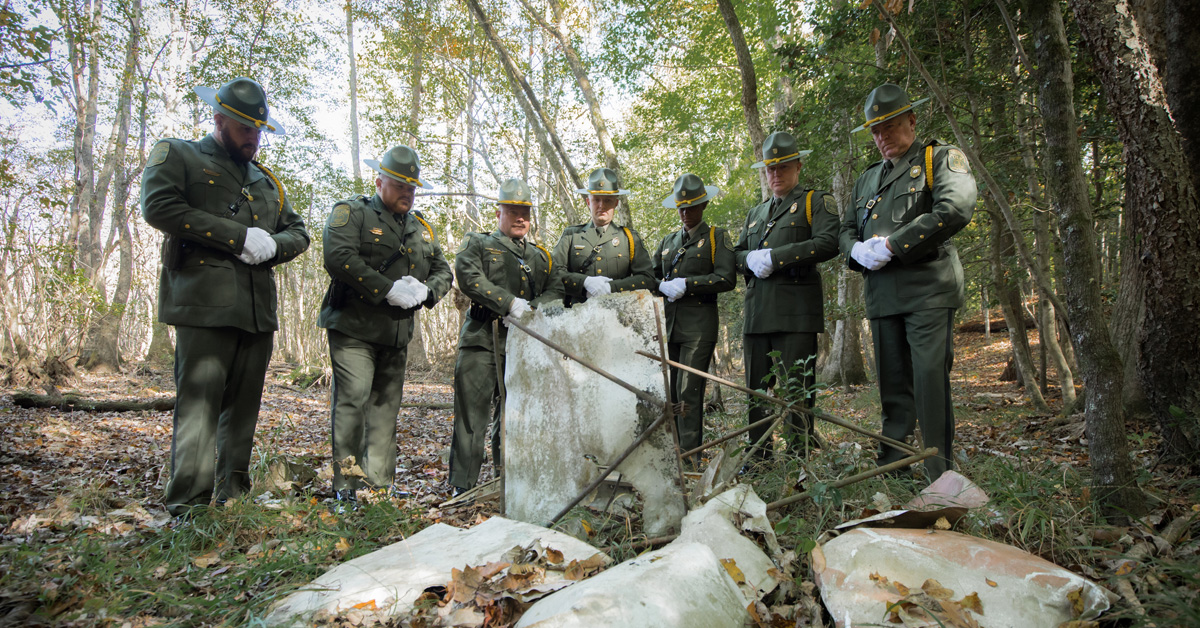 Members of the DWR Conservation Police Honor Guard at the crash site on the Flippo-Gentry WMA.

To mark the 50th anniversary of the passing of two fallen Conservation Police officers, the Virginia Department of Wildlife Resources (DWR) Board of Directors passed a resolution on March 24 to approved the renaming of the Parker’s Branch tract of the Big Woods Wildlife Management Area (WMA) to the Flippo-Gentry WMA in Sussex County. A dedication ceremony for the renaming, attended by the officers’ family and friends, took place on October 20 at the Airfield 4-H Conference Center in Wakefield, Virginia. The ceremony honored and remembered the two fallen officers, Allen Flippo and Donald Gentry, who 50 years ago lost their lives in a tragic plane crash together while patrolling for those engaged in illegally spotlighting deer. Their End of Watch came on December 19, 1972.

Members of the Gentry family attending the ceremony, and while no living family members were able to be found for Flippo, some friends and fellow Game Wardens attended in his honor. 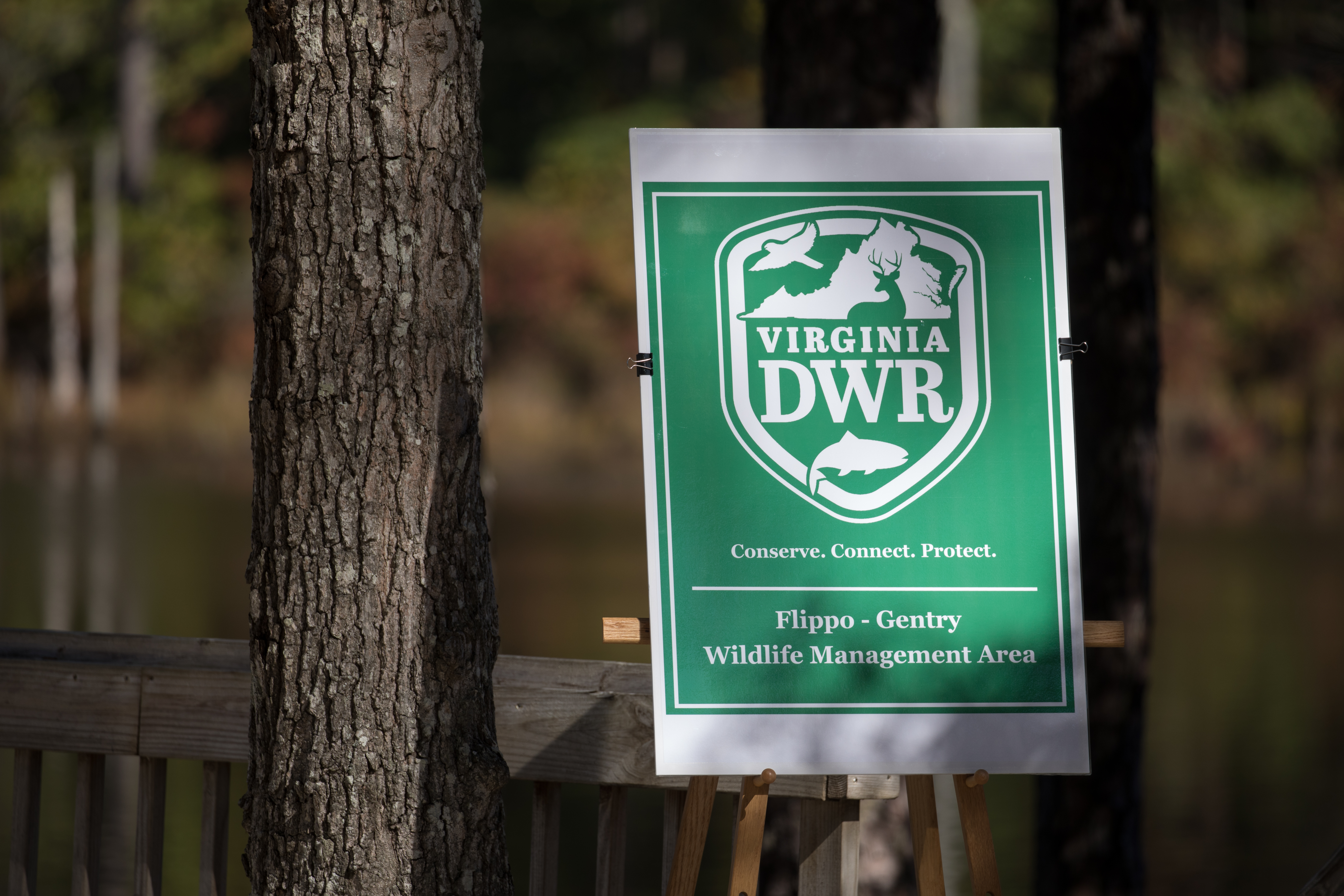 During the 1970 – 1971 hunting season, Southampton County was the #1 deer county in Virginia, with a whitetail deer harvest of 2,153 animals. As a result, an influx of hunters visited the county looking for success the following hunting season.

On December 19, 1972 Virginia Game Wardens of the then-Department of Game and Inland Fisheries (DGIF) planned a routine nighttime patrol to apprehend persons attempting to take deer illegally by the use of lights. It was a Tuesday, and the weather for the day was clear, with good visibility, light winds, temps in the upper 40s to 50 degrees, and a full moon directly overhead at midnight. The patrol consisted of four officers, two in the plane and two in a patrol car for the ground unit. In the ground unit were James “Mac” McClenny, Isle of Wight Game Warden and Kenny Skinner, Surry County Game Warden. In the rented plane, a Piper PA-22, tail # N183A, was the pilot, Allen Flippo, age 26 and a former U.S. Army helicopter pilot who served in Vietnam and was stationed in Virginia Beach, and Donald Gentry, the Southampton County Game Warden serving as observer and communicator with the ground unit.

Flippo was new to DGIF, having served only 10 months, and he had just married Mary Haney in September, three months earlier. Don Gentry, a four-year veteran with DGIF, was married to Lorie Gentry and they had six children, four daughters and two sons: Janet age 13, Linda age 12, Donna age 8, Barbara age 6, and Wyatt Jr. age 10 months. Tragically, they lost their oldest son, Michael, in 1970 when he was 14 years old.

Allen flew the aircraft from the Portsmouth-Chesapeake Airport to the Franklin Airport where he picked up Don. After taking off, Don established radio contact with the ground unit. The area of aerial surveillance concentrated on was Southampton County. The patrol began from Franklin to the Ivor area and then headed south. During the course of the evening the ground unit stopped and checked several vehicles pointed out by the plane as suspicious. The ground unit would maintain visual contact with the plane by shining their spotlight on their patrol car up and around till spotted by the aircraft and Don would radio, “I got you.”

The plane was very visible to the officers in the roving ground unit. The patrol had worked their way south of Courtland when at approximately 9:45 p.m., Don advised the ground unit that they were watching something and for them to standby in the Boykins area. That was the last contact received from the plane. No distress call was ever received by the ground unit or air traffic control. The ground unit tried calling the aircraft after standing by for 10 or so minutes in Boykins with no response. The officers hoped it was just a problem with the radios and if so, the plane would put down at the nearest airport.

The officers kept trying to reach the plane while they drove to the Franklin Airport to check there. They also called the Greensville Sheriff’s Office to get Cato Collins to check at the Emporia Airport. The aircraft was not at the Franklin Airport so they drove to check at the Wakefield Airport. The aircraft was not located at any airport in the area. By this time, it was early in the morning and the calls went out for assistance and officers were awakened and came in from all over the District. The officers concentrated on the area around Boykins and drove the roads and trails and knocked on doors talking to landowners. Sheriff’s deputies, State Police and Civil Air Patrol also responded. Some of the Game Wardens that helped with the search were: Shelton Roundtree, Charlie Hunter, Garland Foster, Chick Hawks, Sam Snead, Cato Collins, Jim Ogden, Richard Wilmoth, Kenny Sexton, and of course “Mac” McClenny and Kenny Skinner.

The aircraft was found after daylight, the morning of December 20, at approximately 10:00 a.m. Both officers perished in the crash of the Piper aircraft. It crashed through trees and then flipped upside down at the edge of a swamp at Darden Pond near the town of Newsoms.

The accident was investigated by FAA Investigator Ken Zelowski out of Norfolk and NTSB Investigator Herbert Banks out of JFK Airport in New York. It was widely rumored that the aircraft was shot down but Investigator Banks said that nothing was found to indicate anything like that. Southampton Sheriff Ryland Brooks stated that he did not believe the plane was shot down. He said people in the area heard the plane but no one heard any shots. There were indications that there was an inflight fire onboard the aircraft prior to it crashing. 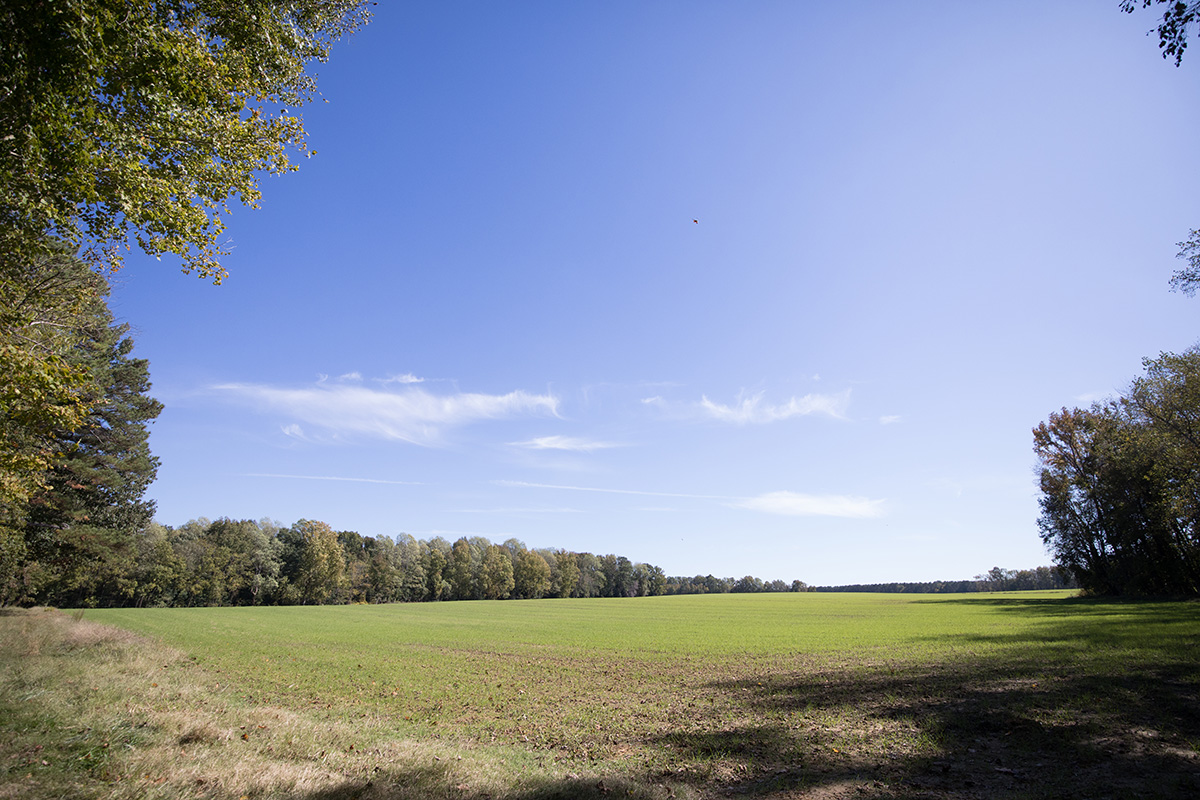 A field at the Flippo-Gentry WMA. 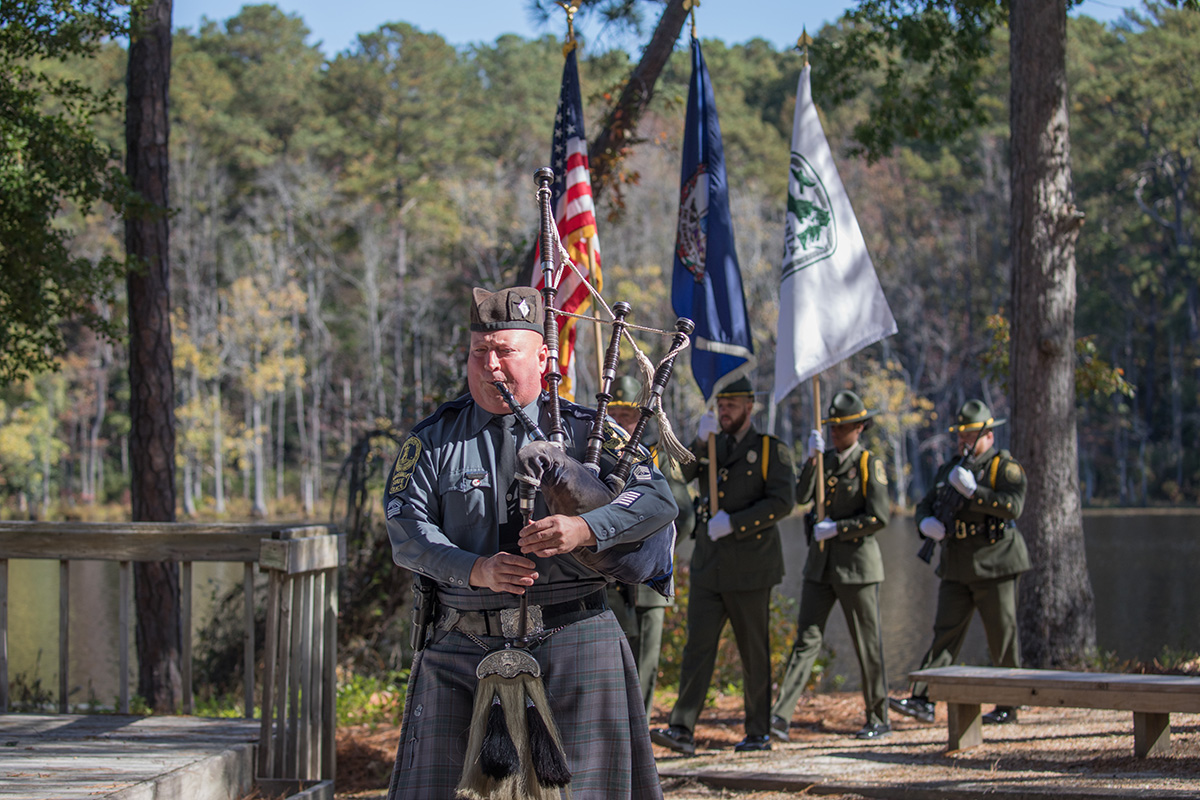 The DWR Honor Guard at the dedication ceremony. 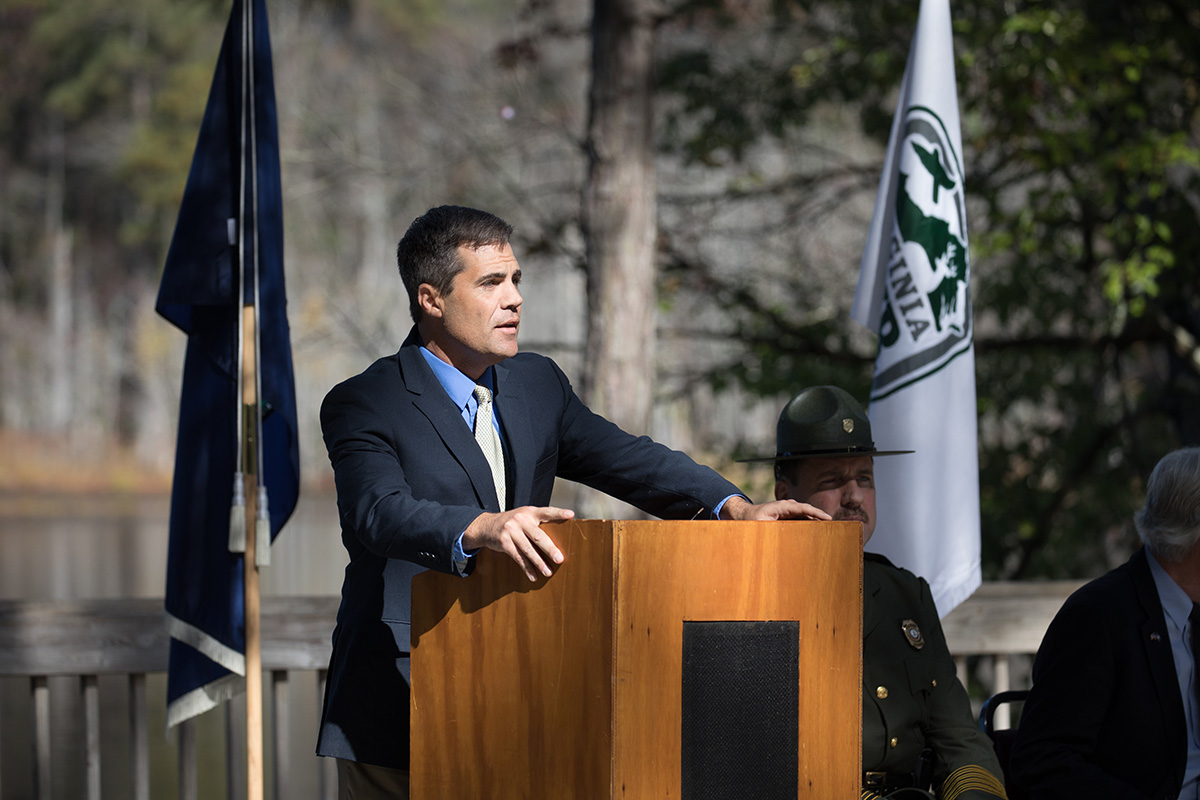 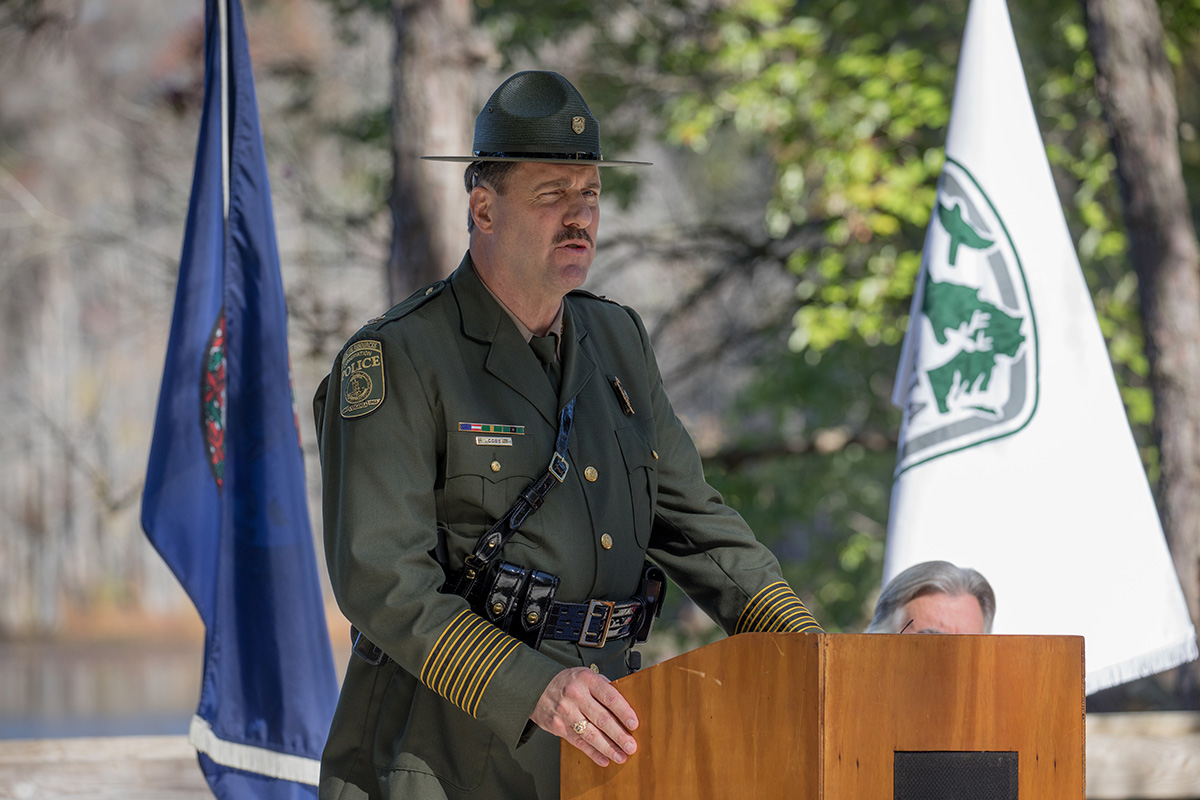 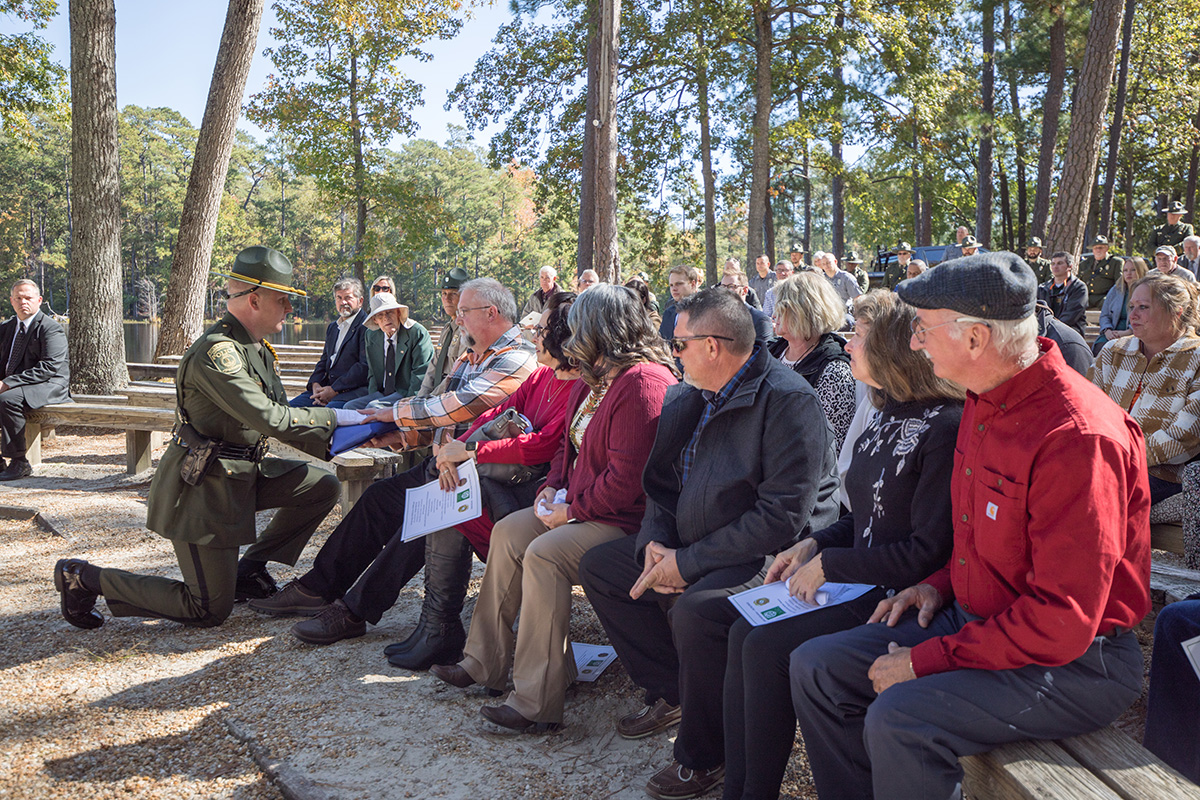 The Virginia state flag being presented to the Gentry family. 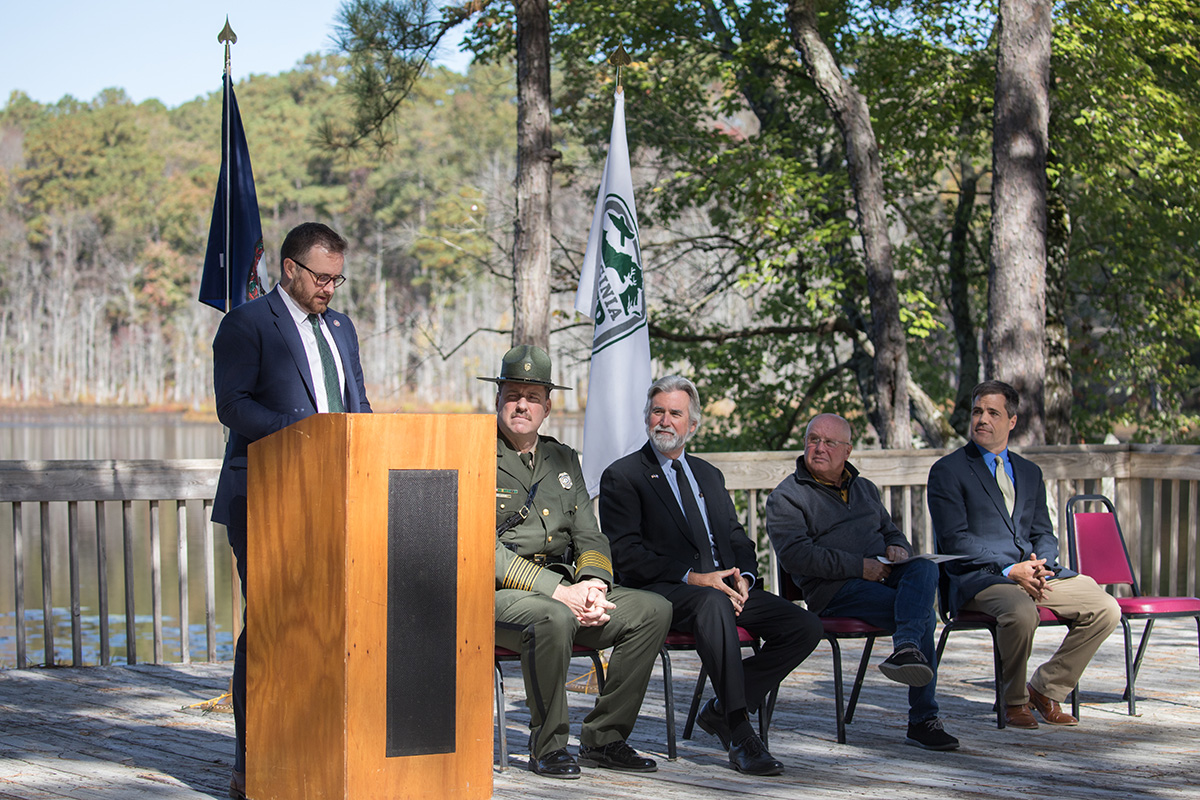 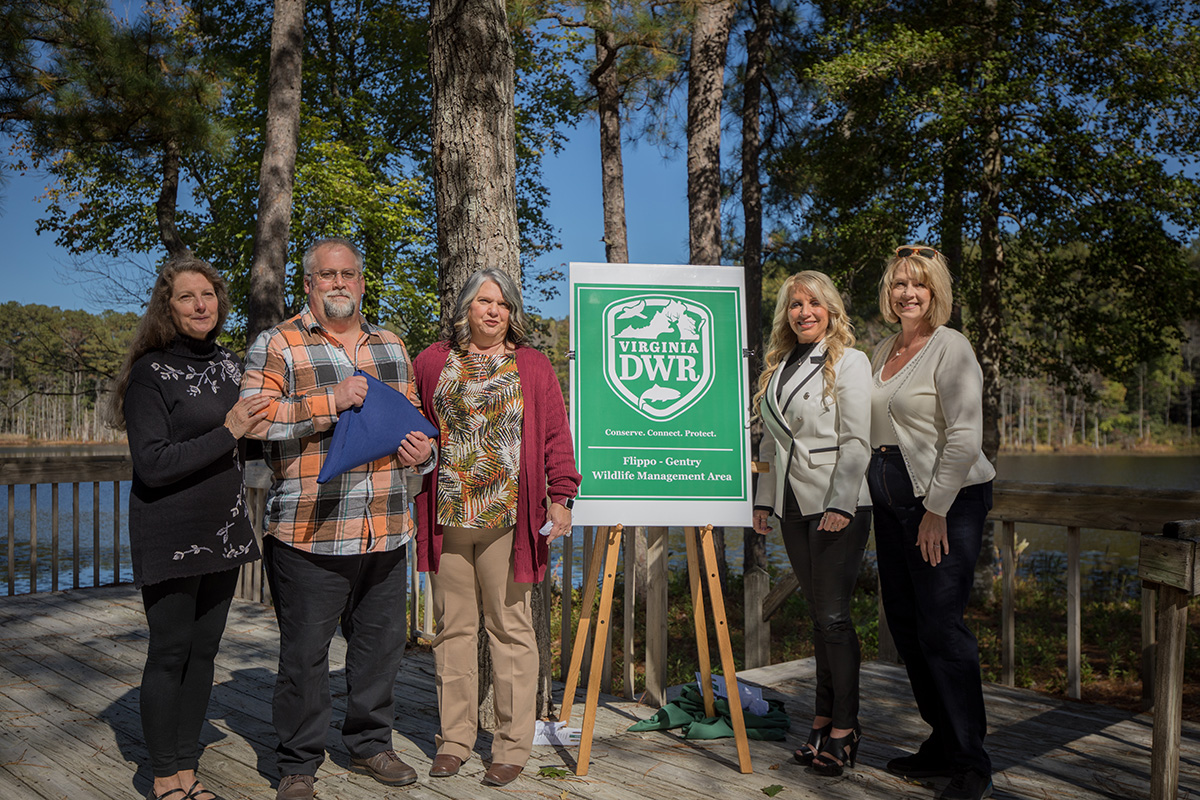