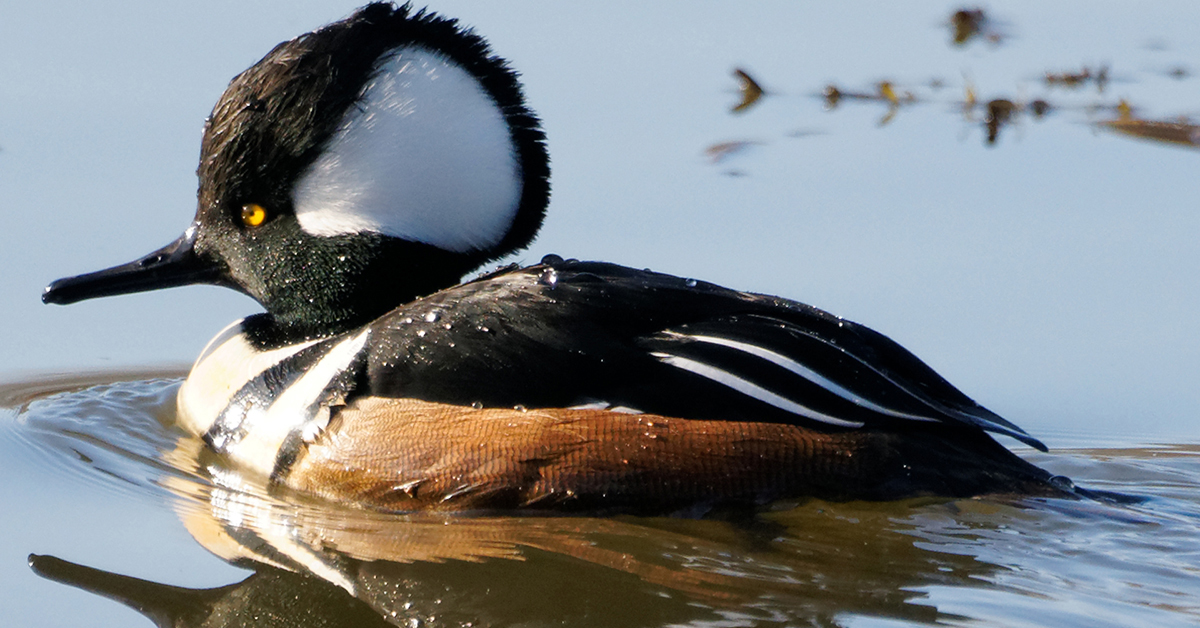 Are you looking for an outdoor activity to do this winter? Try bird watching! This may seem like a surprising winter activity, considering that many birds migrate south for the winter. However, while that is true for many species, in Virginia, we are lucky to provide the southern home to numerous migratory bird species that breed further north, including many arctic species, such as a wide diversity of ducks, geese, swans, seabirds, and some songbirds. Of course, we also have numerous species of birds that call Virginia home year-round. This makes winter a superb time of year to explore Virginia’s outdoors for these wintertime visitors and residents.

These birds are just some of the many beautiful and interesting species you may discover while birding in Virginia this winter. 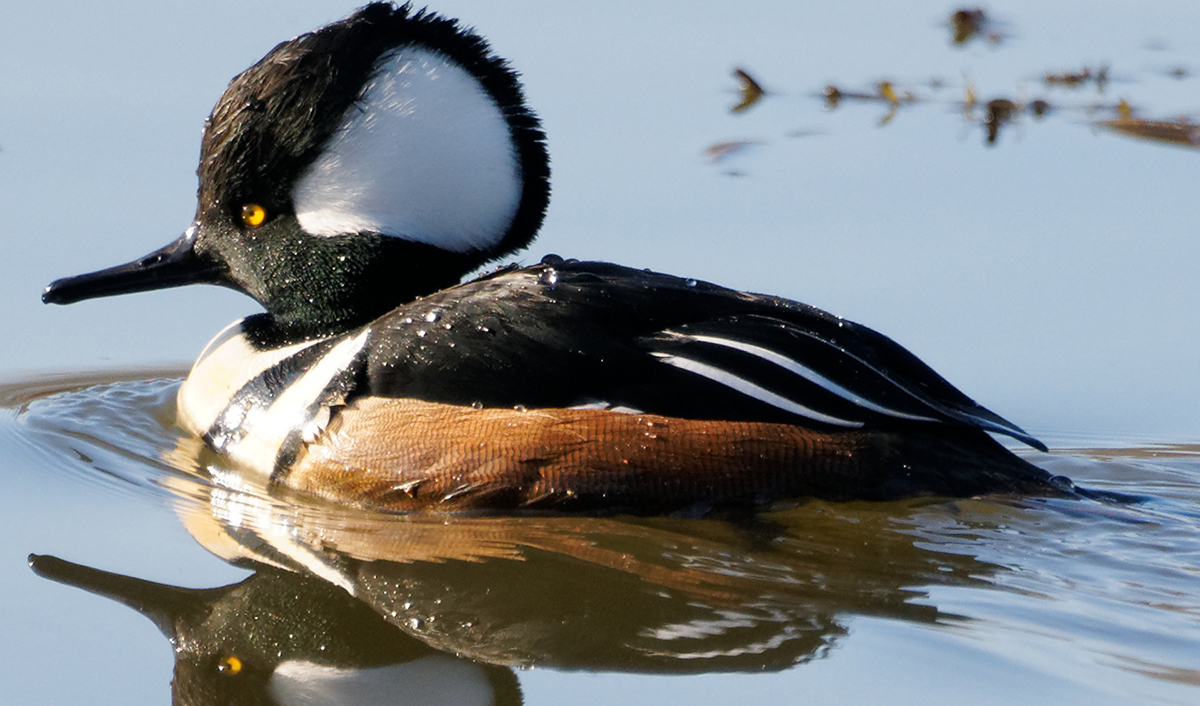 These small diving ducks court one another by throwing their heads backward and croaking like a frog. Photo by Ellen and Tony/Fliker Creative Commons 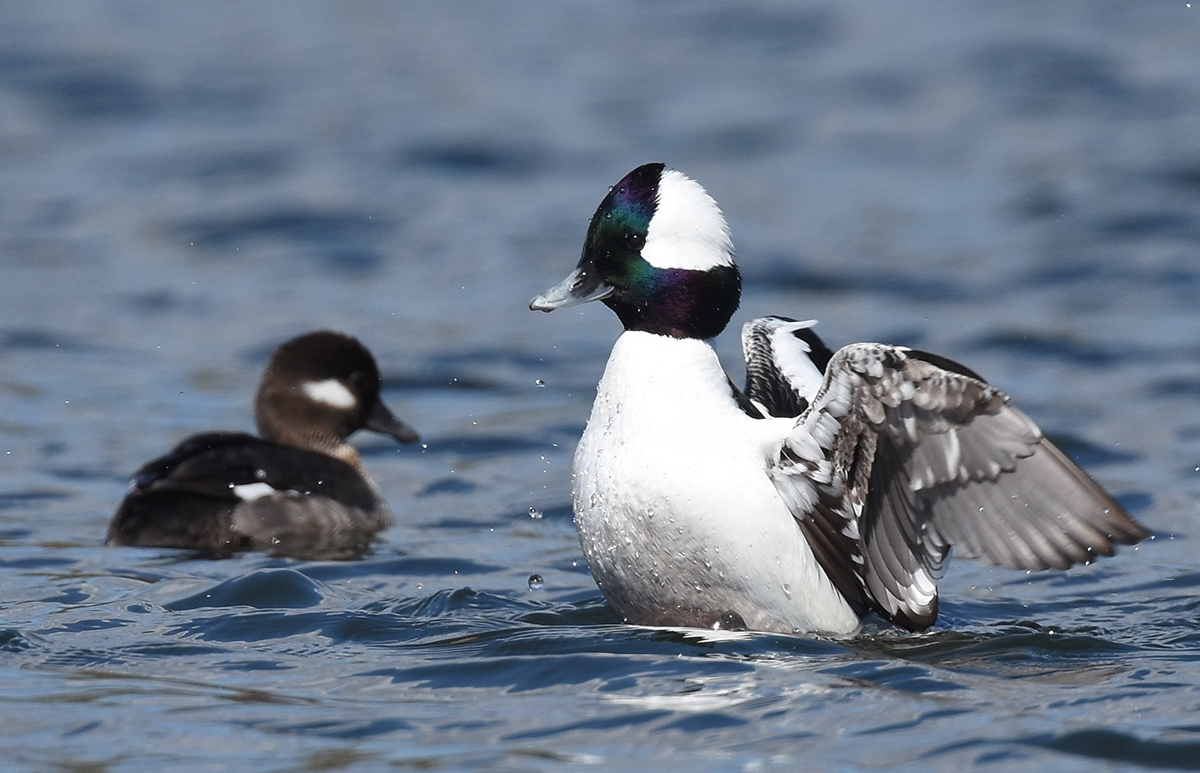 The smallest diving duck in North America, nicknamed a “butterball,” breeds in the boreal forests of Canada and Alaska. Female on left, male on right. Photo by Andy Reago and Chrissy McClarren/Flickr Creative Commons 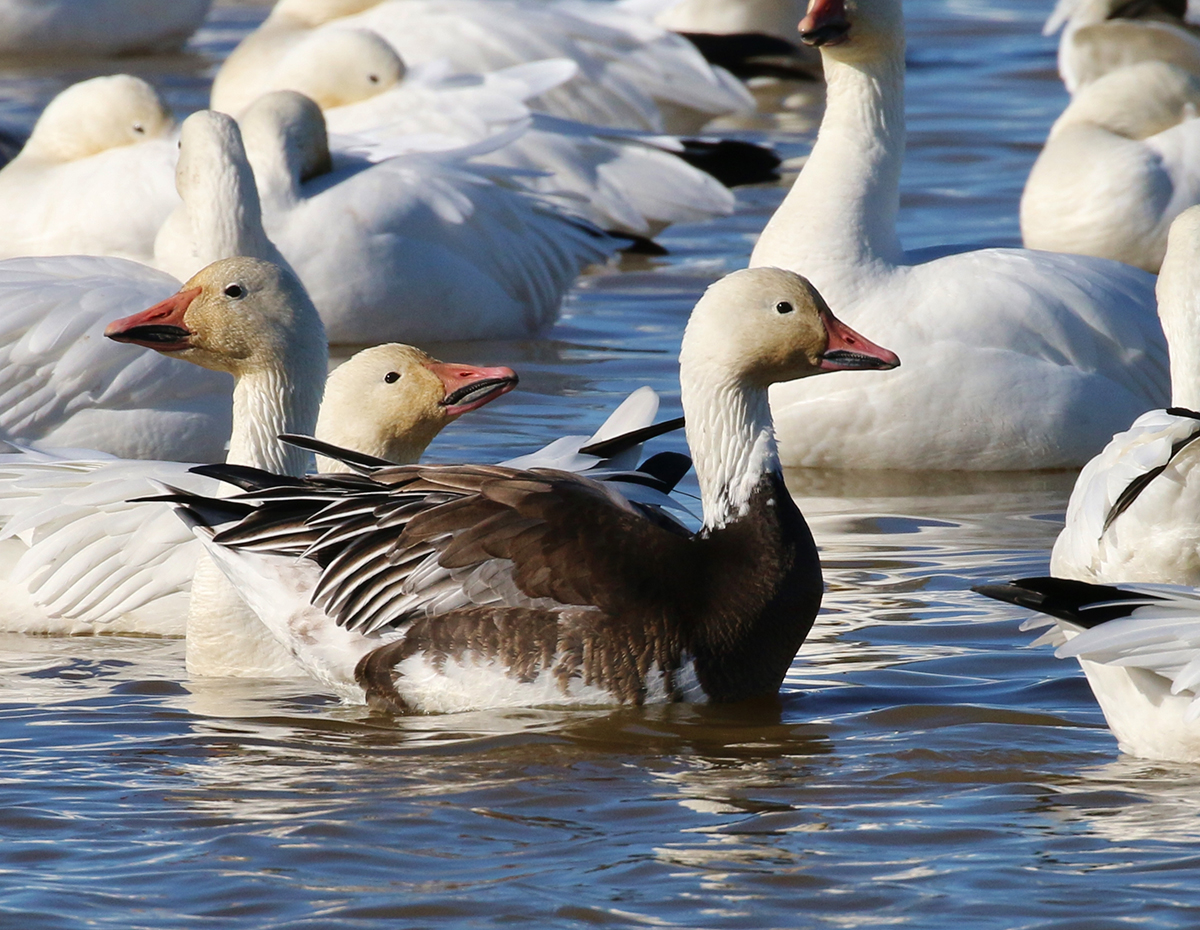 Amongst flocks of these noisy white geese with pink bills, you may spot a goose that does not look like the others with a dark body and white head; this form is known as the “Blue Goose.” Seen here in foreground. Photo by Tom Benson 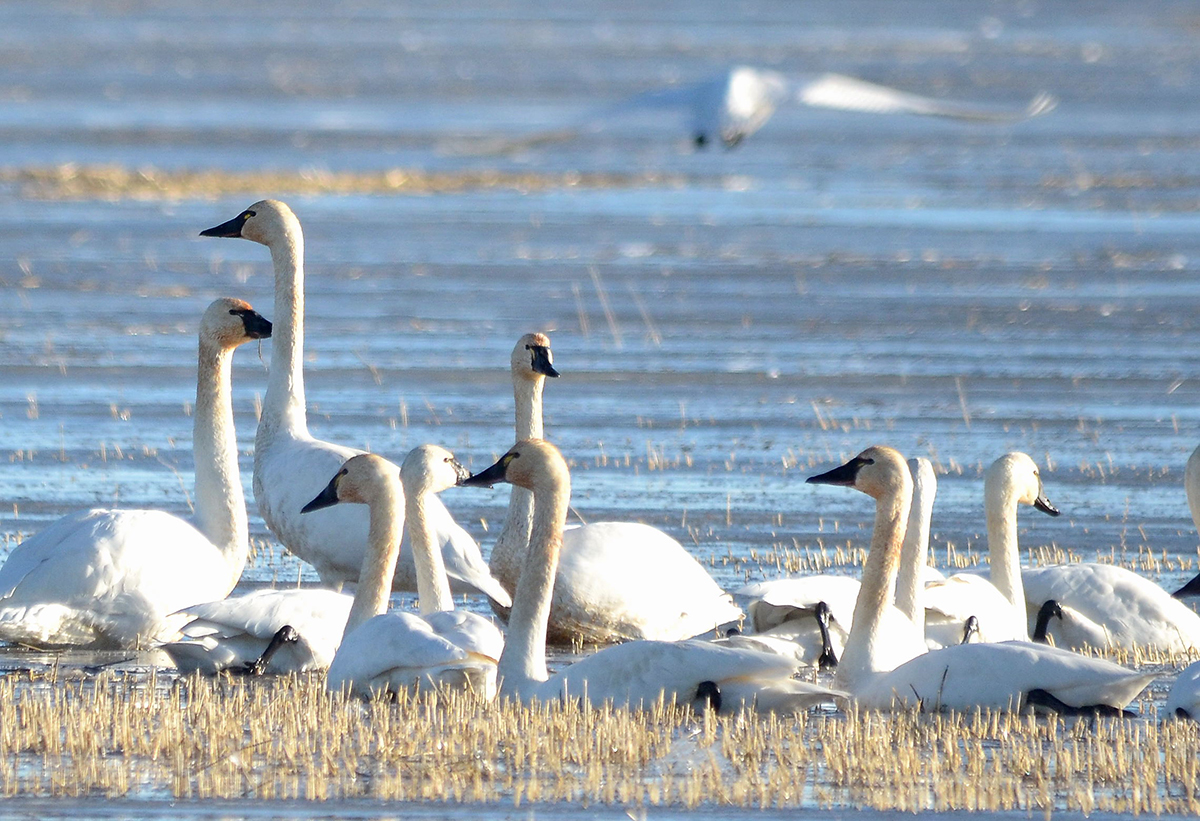 This arctic breeder has a unique whistling call. Their black bill and black legs distinguish them from the non-native mute swan. Photo by Frank D. Lospalluto 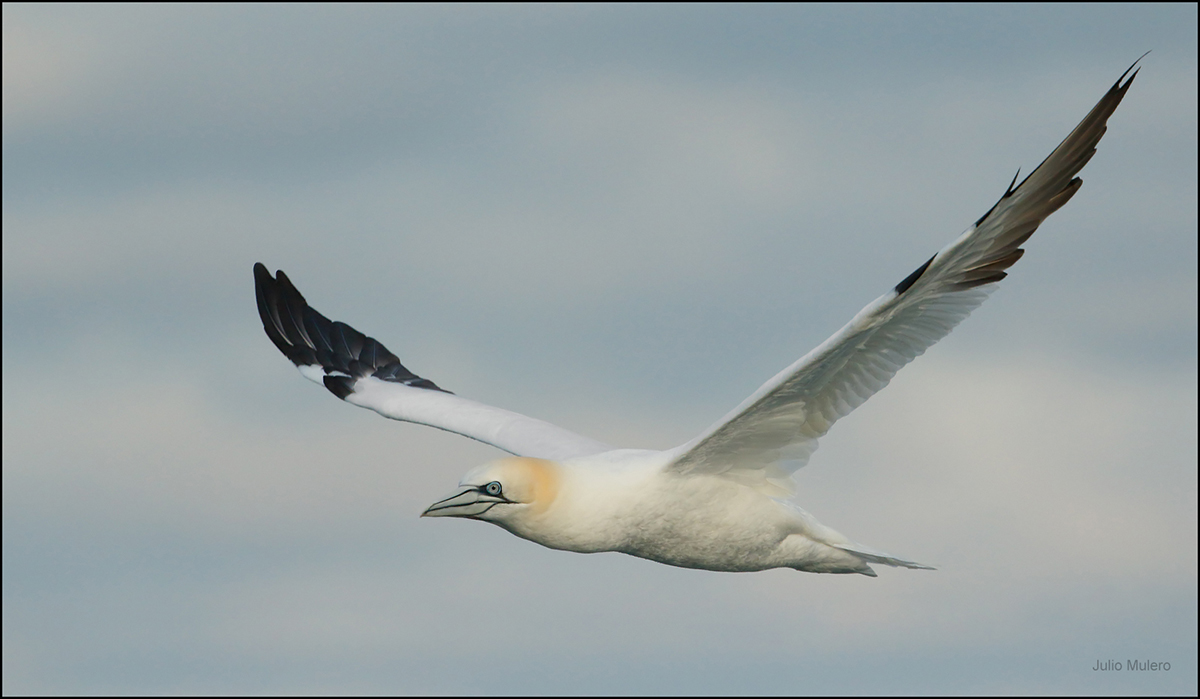 This large seabird plunge dives from the air like an arrow to catch fish underwater, swimming below the surface as deep as 72 feet. Photo by Juleo Mulero 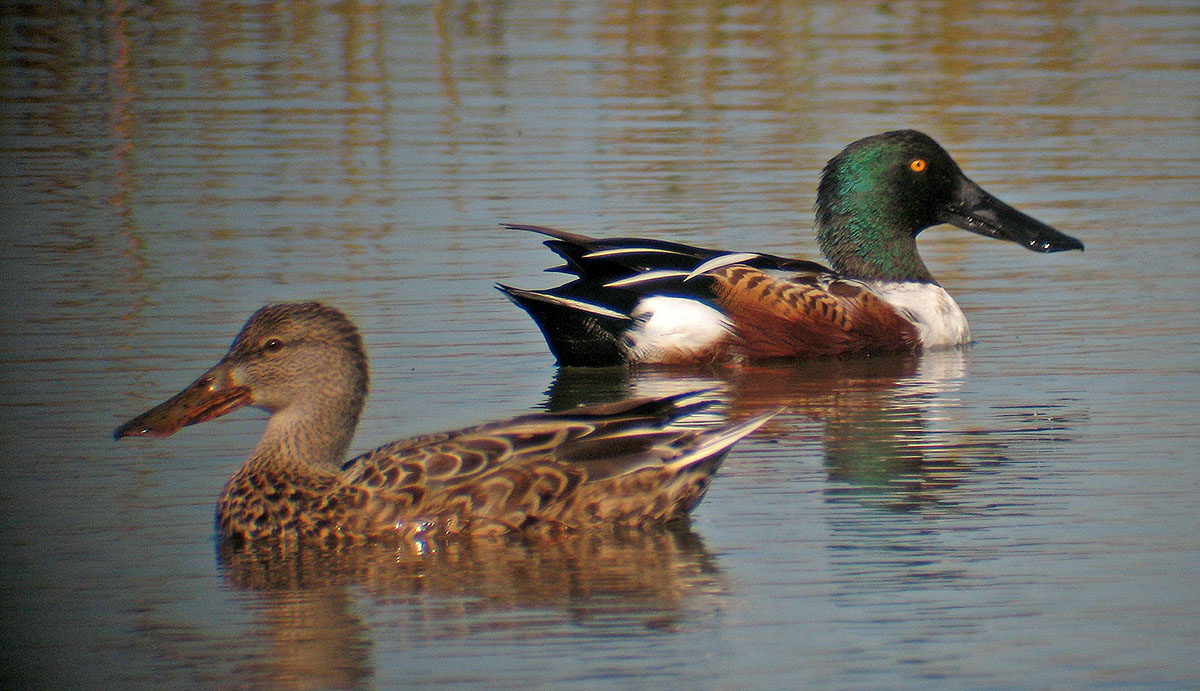 This dabbling duck has a unique spoon-shaped bill that helps it filter out tiny crustaceans and seeds from the water’s surface. Female in Foreground, male in background. Photo by K. Schneider 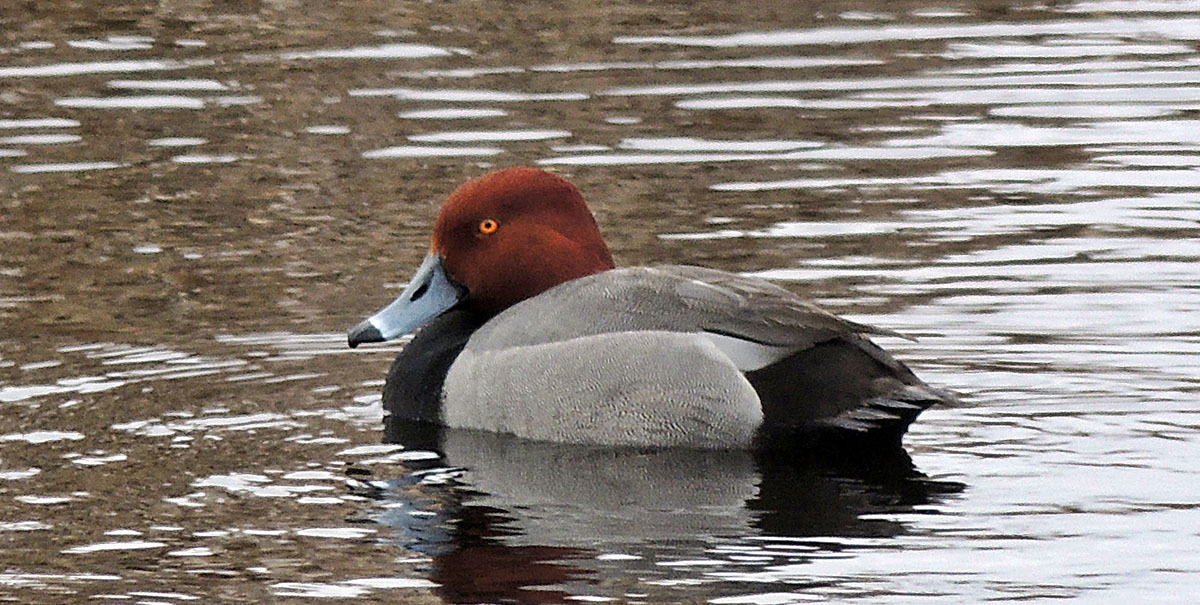 Migrating to Virginia from the Great Plain states, these red-headed ducks are very social and often seen in large flocks called “rafts.” Photo by Robert Pruner 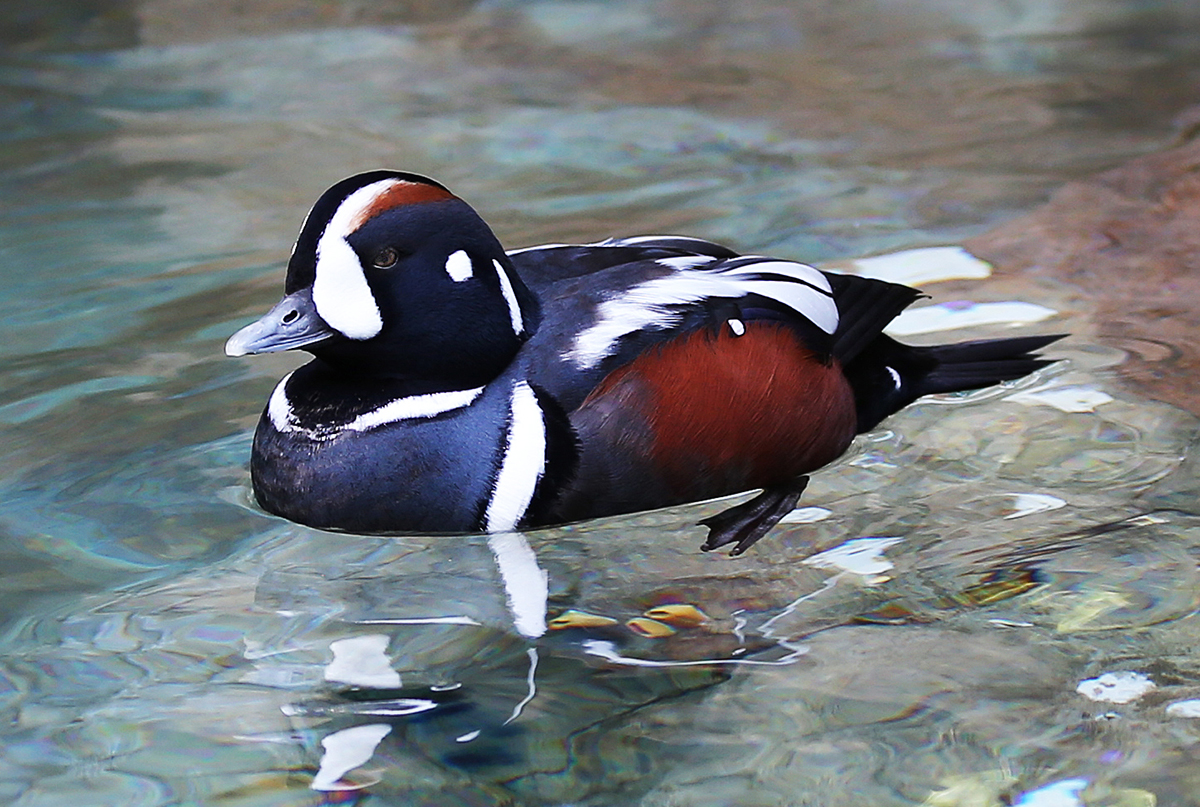 To spot these small yet striking diving ducks, you will need to head to Virginia’s coastline or head out on a pelagic boat trip. Photo by Rennett Stowe 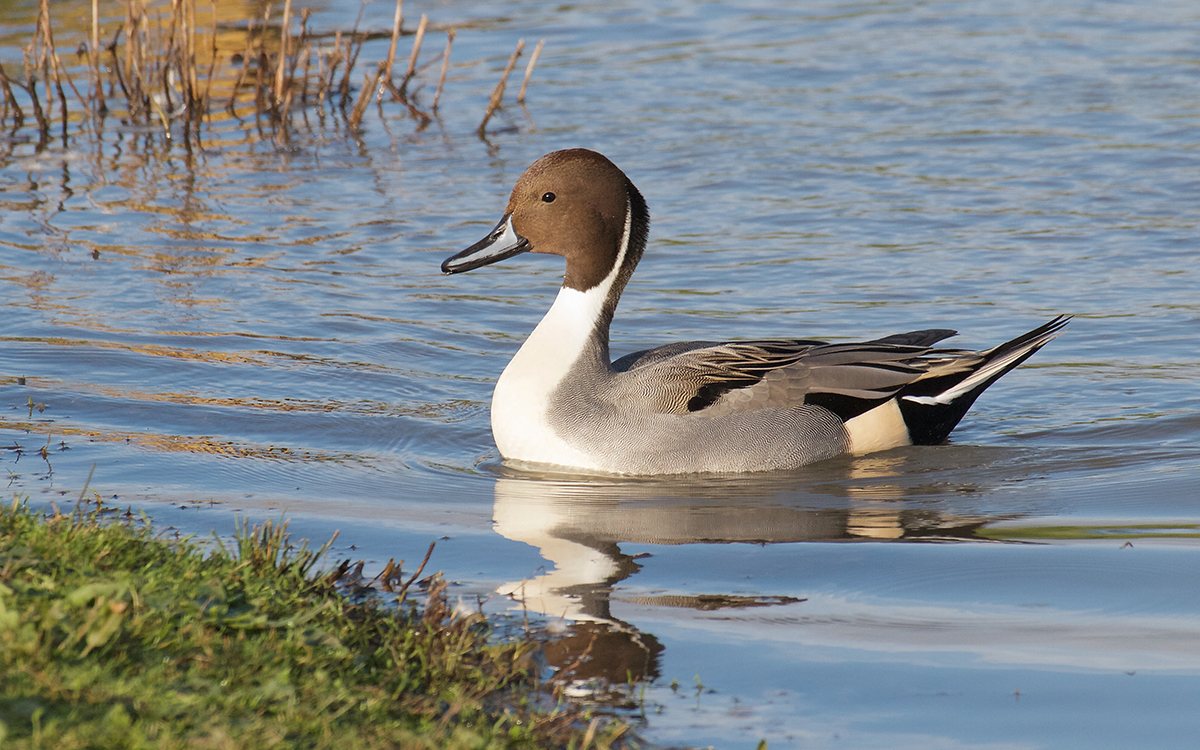 This elegant duck begins forming into pairs over the winter. Males will court females by preening their wings and stretching their necks up and tipping their bills down while giving a whistling call. Photo by Richard Toller 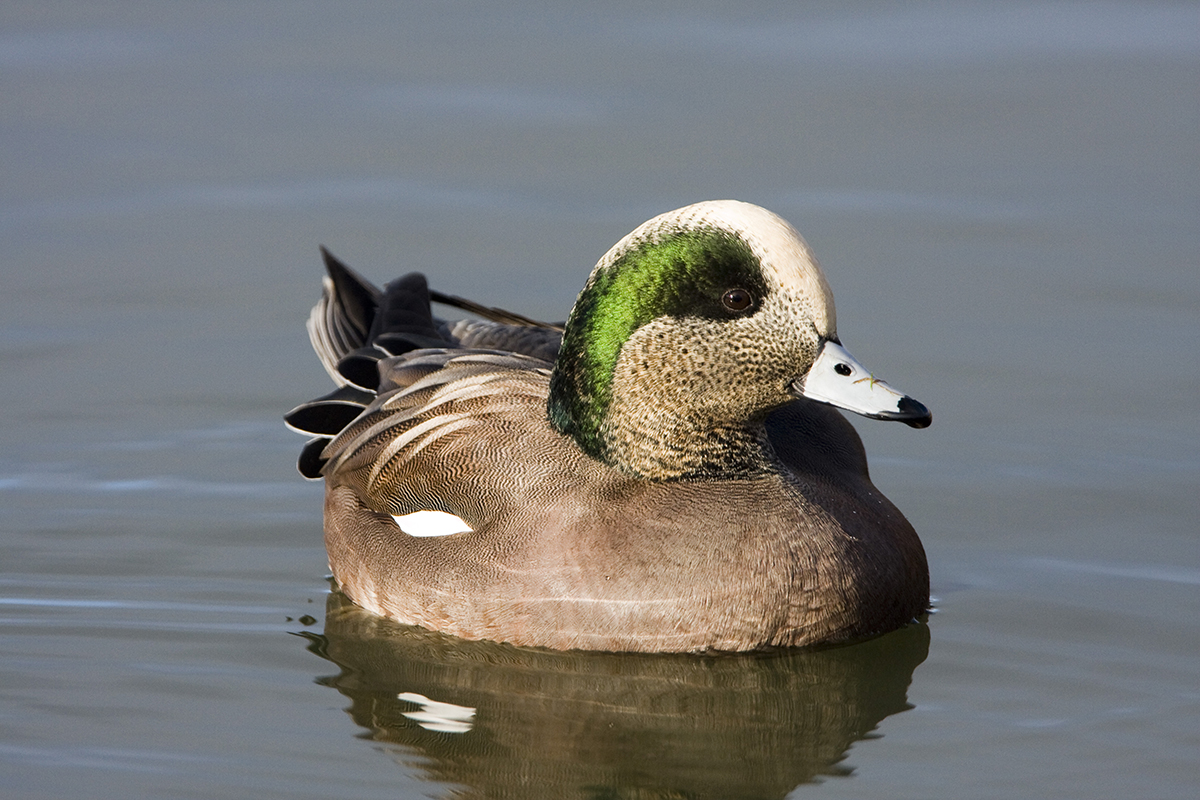 A dabbling duck with a short goose-like bill that allows them to eat more plants than any other dabbling duck. Males have a white forehead and striking green eye streak while females are drab with a dark smoky eye. Photo by Rick Leche Photography 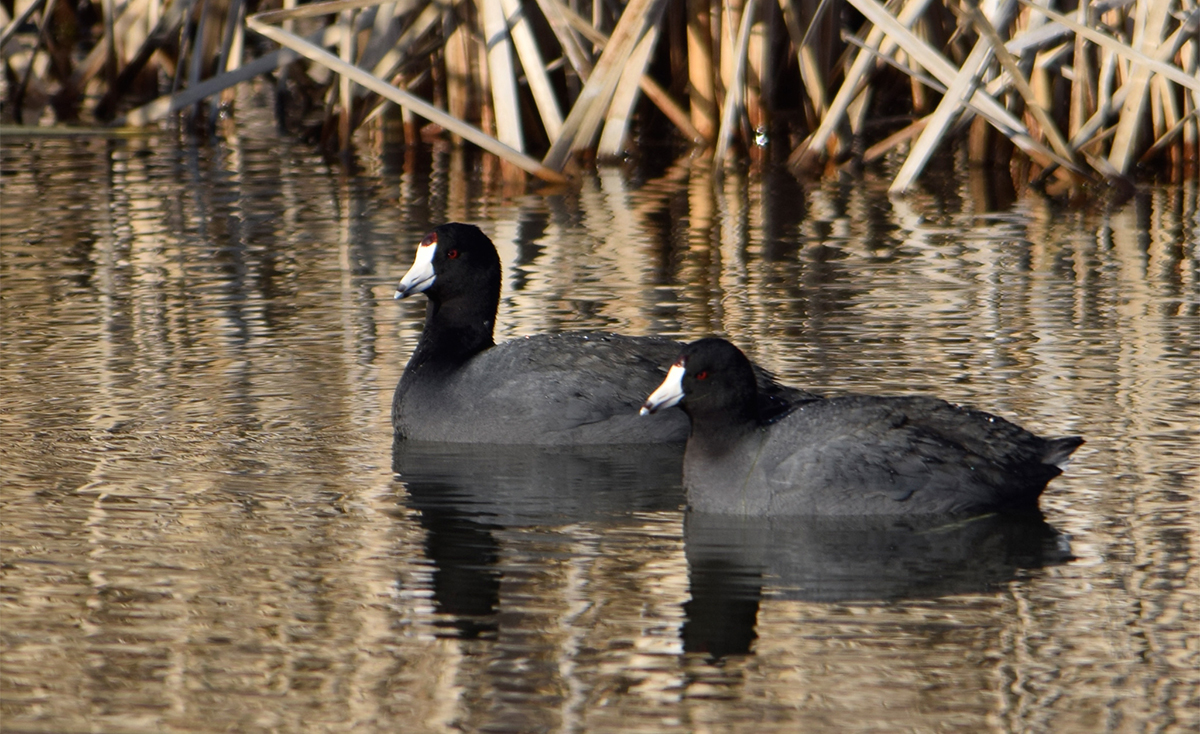 Not a duck, these chicken-like water birds are more closely related to sandhill cranes and rails. They do not have webbed feet, but rather individually webbed toes. Photo by Chris Bowman 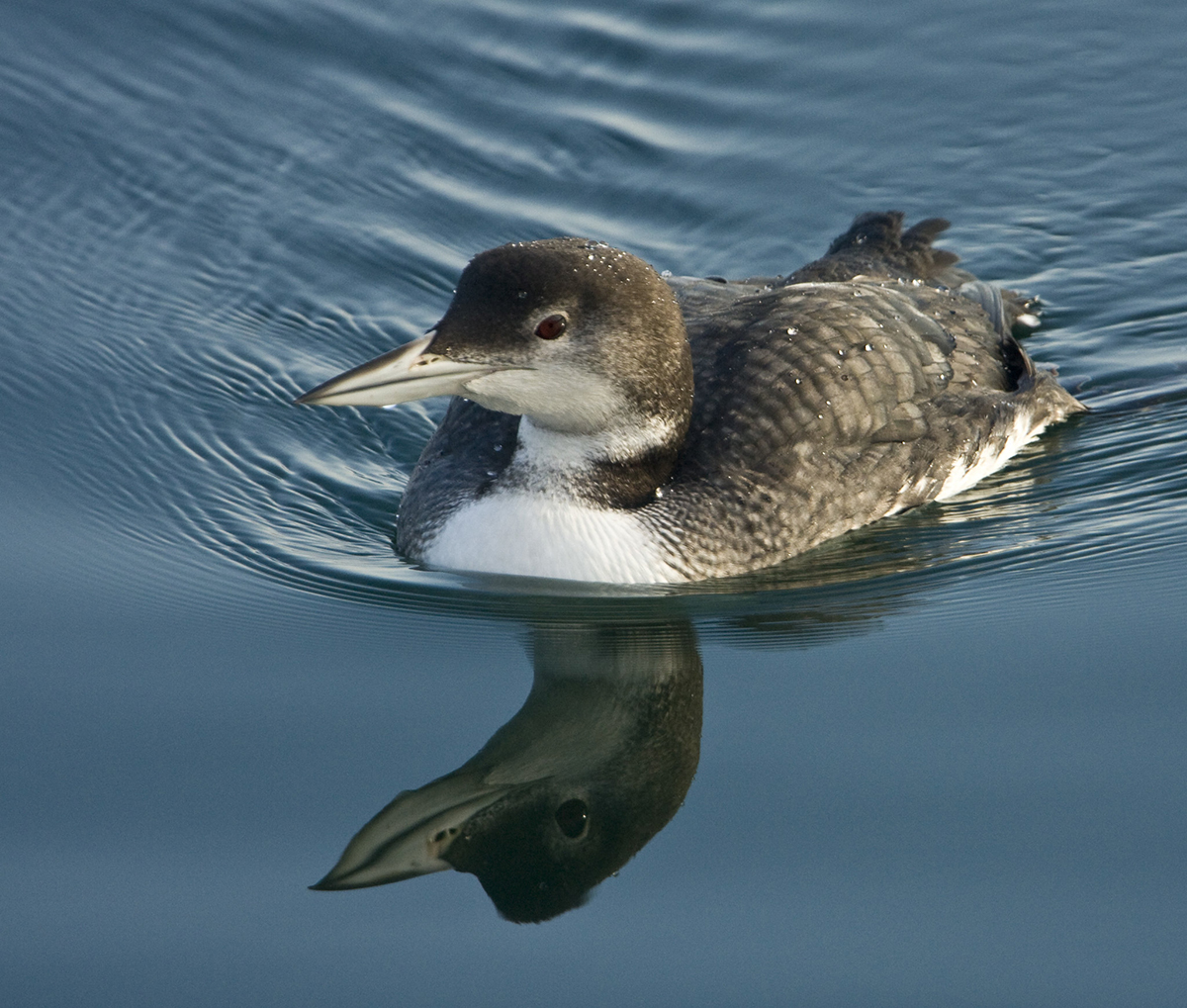 These yodeling winter visitors do not go ashore during their stay in Virginia; look for them swimming and diving underwater to catch fish. When ready for take-off, they require about 30 yards of water to run across to gain enough speed for lift-off. Photo by Rick Leche Photography 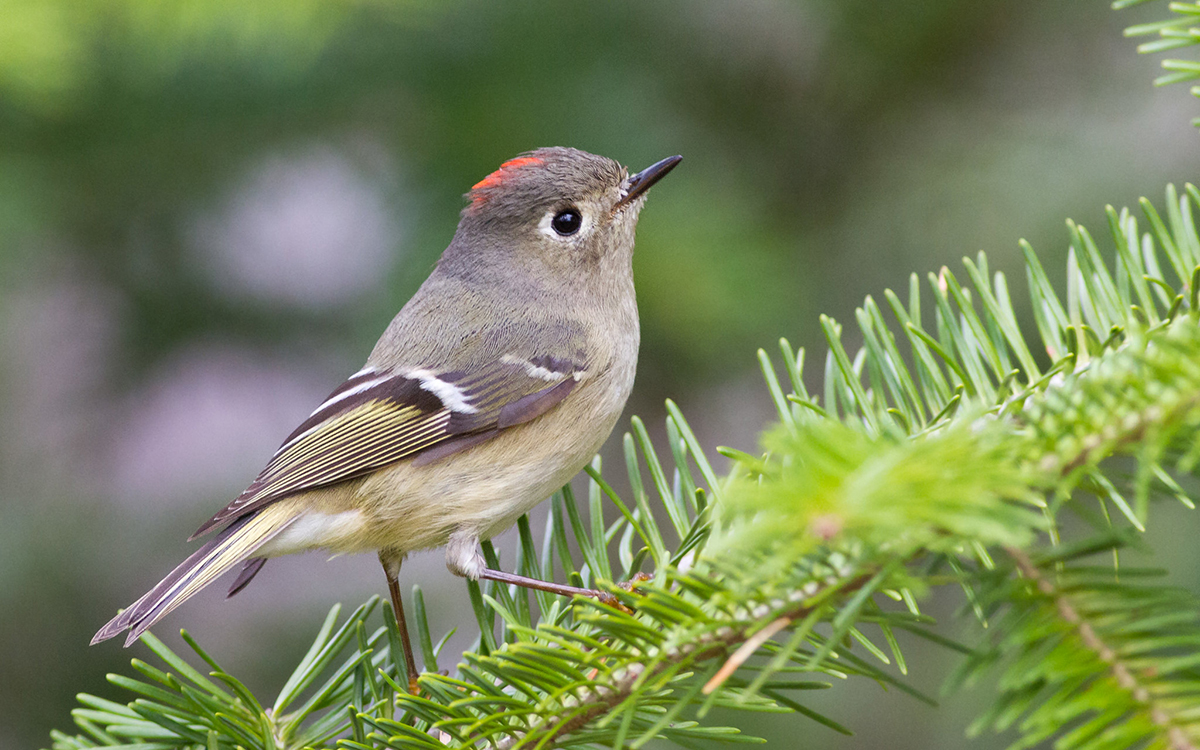 A tiny songbird that energetically, yet quietly forges through the lower branches of shrubs and trees.  The red crown patch that gives the bird its name is only found on the males, which they only show when they are excited. Photo by Fyn Kynd 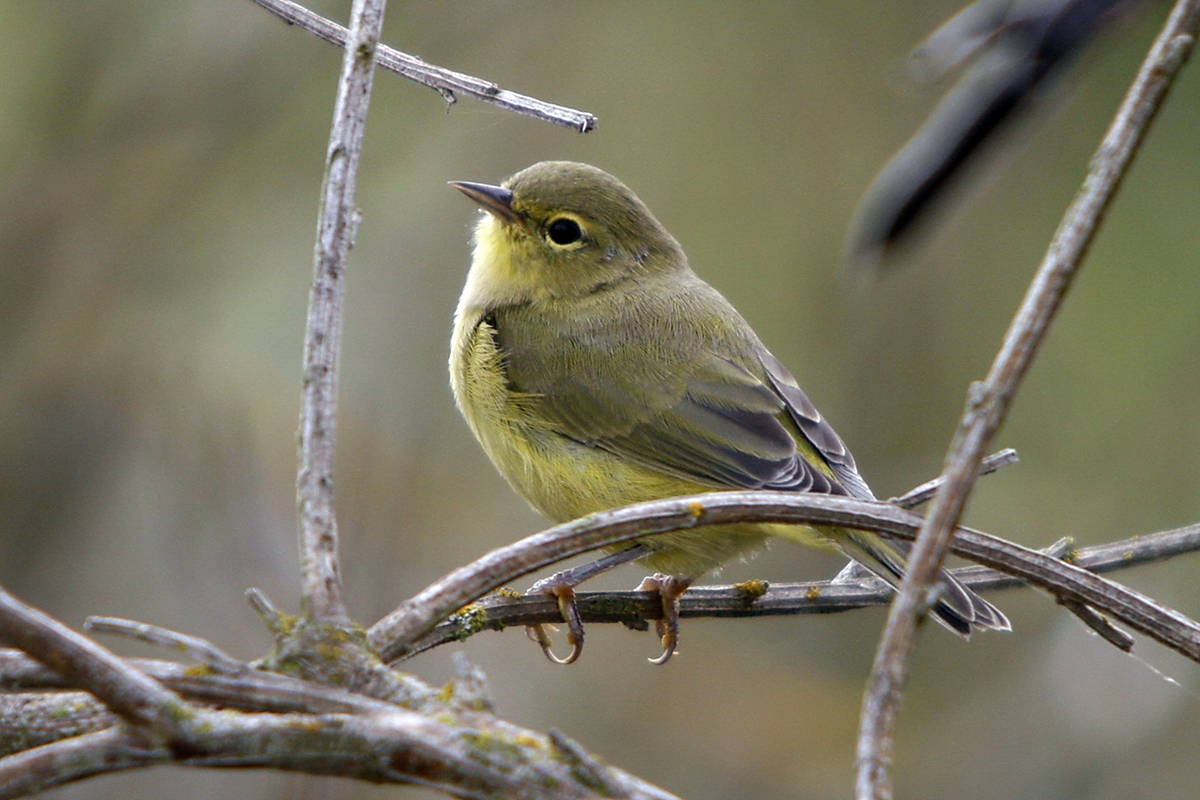 Most likely to only be found in southeast Virginia in the winter, these olive-green warblers lack the vivid colors of the others in their family and are often found foraging low in shrubs. Photo by Rick Leche Photography 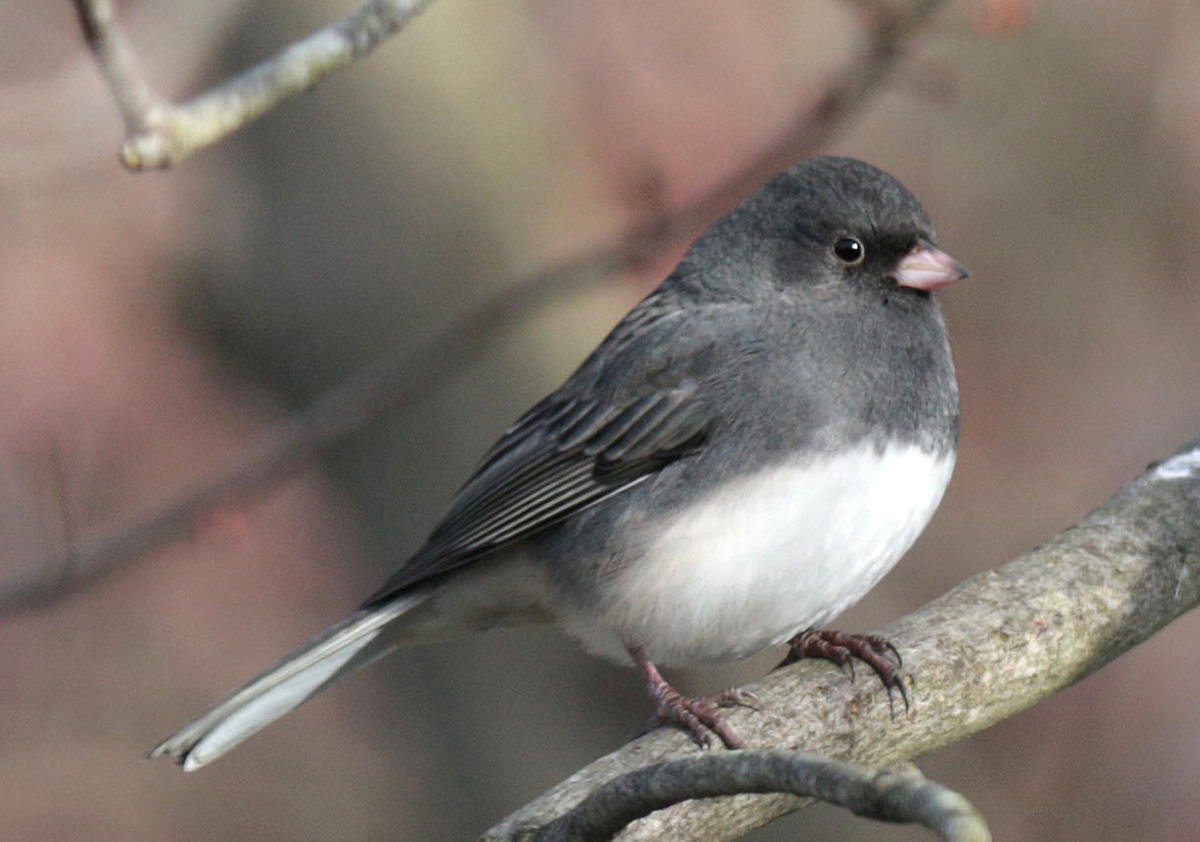 Although these attractive sparrows can be found year-round in Virginia’s highest elevations, they visit the rest of the Commonwealth only during the winter. Often observed feeding on dropped seed underneath bird feeders, you may see them in a variety of color variations, the most common being slate-grey. Photo by Flikr/Creative Commons Photo

Virginia’s coastal areas (especially Southeast Virginia and the Eastern Shore) host the widest diversity of species, in the greatest numbers. If you are planning to bird in coastal Virginia this winter, consider adding to your birding fun by participating in the Winter Wildlife Festival Birding Challenge, occurring January 23 – 29.

Can’t make it out to the coast? A few scattered rivers, lakes and reservoirs throughout central Virginia also host some winter bird visitors. Explore the Virginia Bird & Wildlife Trail sites listed below from now – early February to discover our visiting winter birds! Remember to dress in layers to stay warm (drab colors are best to blend in) and bring binoculars and/or a spotting scope, if you have them. Water birds may be off at a distance and difficult to observe without the help of some optics. Always check the visiting hours for each site before you head out.