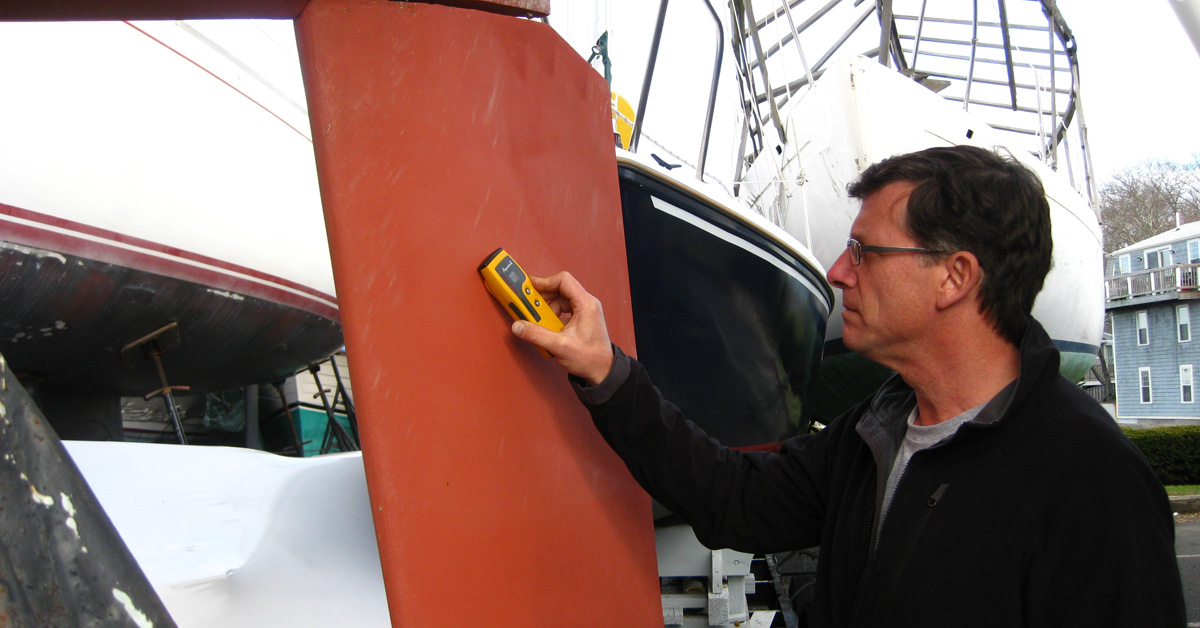 By Bob Adriance for BoatUS

Like a lot of first-time buyers, it’s fair to say that the restaurant executive was head over heels in love with the boat—in this case, a 28-foot sportfishing boat—and couldn’t wait to finish the paperwork and take title. But first—and this really irked him —the local bank was saying he had to have it surveyed. If a used boat is being financed by a financial institution, the institution may require a marine surveyor’s report.

The man reluctantly called the broker who gave him a shortlist of names. After a little price shopping over the phone, the executive had his surveyor and was only one short step away from owning the boat.

The survey inspection went well; at least it went quickly. The boat was hauled out of the water and the surveyor spent a couple of hours poking around the boat, occasionally pausing to scribble a few comments in a notebook. Two days after the inspection, the survey arrived with a few minor recommendations. The surveyor also placed a value on the boat that was acceptable to the bank, and in short order the executive had his boat.

It would be nice to say that the restaurant executive and his new boat lived happily ever after, but it wasn’t to be. Over the following weeks and months, problems arose with a rusted engine mount, a worn cutlass bearing, and the grim discovery of rot in two bulkheads. Every one of the boat’s seacocks was “frozen” open, and a badly leaking hose almost sank the boat. Finally, a helpful engine mechanic who was doing some repair work noticed the boat’s water heater mounted in the engine compartment wasn’t ignition-protected and strongly recommended that it be replaced. The end result was that two years and several more repairs later, the sportfisher went up for sale. It was an expensive lesson on the value of a good marine survey.

Finding a competent surveyor may be the final step in a boat purchase, but it could easily be the most important, and should never be taken lightly. Anyone can call himself a marine surveyor; there are no licenses or exams required. One longstanding joke among surveyors is that all it takes to become a “professional” is a business card, a cell phone, and somebody to believe you.

Being a competent marine surveyor, on the other hand, requires a good deal more. First it takes expertise, a lot of expertise. The American Boat & Yacht Council (ABYC) publishes 68 standards totaling over 650 pages that cover everything from a boat’s deck hardware to fuel and electrical systems. Being a competent marine surveyor requires a comfortable working knowledge of them all. In addition to ABYC standards, a surveyor must know National Fire Protection Association (NFPA) standards and the Coast Guard’s safety requirements, and be familiar with various construction standards (ABS and Lloyds). Needless to say, a good marine surveyor must have a mind for technical details.

These standards are continually being revised and a surveyor has to keep abreast of the changes, which means reading technical books and attending education seminars. The latter involves paying for airfare, hotels, and meals. Good surveyors also invest in expensive moisture meters and multimeters. In a few cases, they may purchase specialty equipment such as hardness testers and ultrasonic thickness gauges. Becoming a competent surveyor involves making a considerable financial commitment.

Surveyors aren’t licensed, so the industry is in the position of having to police itself. There are two major surveying organizations, which, among other things, have programs to certify or accredit their members: the National Association of Marine Surveyors (NAMS) and the Society of Accredited Marine Surveyors (SAMS). A NAMS surveyor must have at least five years experience working as a full-time marine surveyor and pass an exam in order to use the initials NAMS-CMS (NAMS Certified Marine Surveyor) after his or her name. A SAMS surveyor who’s worked five years as a full- or part-time surveyor and has passed an exam can use the AMS (Accredited Marine Surveyor) credentials. Both organizations have apprentice members who have not yet earned their certification.

There are a handful of other surveyor organizations, some of which are more credible than others. There are also some very competent marine surveyors who, for one reason or another, don’t belong to any surveyor organization. If you’re not sure whether BoatU.S. Marine Insurance will accept a survey from someone you’ve been talking to, call one of their underwriters: 800-283-2883.

What’s Covered in a Survey?

Even among the best surveyors, there is no consensus on what is or isn’t covered on a pre-purchase survey. NAMS and SAMS both publish voluntary survey report guidelines for their members. (NAMS publishes “Recommended Guidelines for Yacht Condition and Valuation Surveys” and SAMS publishes “Recommended Survey Report Content.”) BoatU.S. did a poll of SAMS and NAMS members who survey recreational boats that found many of their inspections are consistently the same. A comfortable majority of surveyors said they always sound the boat (using a plastic hammer to detect voids and delamination), reference the ABYC standards, and test electronics to see if they’re operable.

There were also some significant variations. For example, only a slight majority of surveyors always use a moisture meter and slightly less than half said they always take the boat on a sea trial (assuming a sea trial is possible). There are even bigger differences with engine inspections. A few surveyors are former mechanics and are qualified to do a complete inspection while others have very little hands-on experience. Most have at least some familiarity with engines but stop short of a complete inspection—oil analysis, compression check, and so on.

Using a scale of 0 (no inspection) to 10 (complete mechanical inspection), the poll average of 6.05 indicates most surveyors spend at least some time with engines. Based on the age of the boat, the number of hours on the engine, and what’s found during the inspection, a surveyor will often recommend that a mechanic do a more complete analysis. It’s usually good advice, although some surveyors include a disclaimer recommending an engine inspection with every survey. The same is true of sailboat rigs—going aloft—and electrical system inspections. The latter can take many hours and is usually recommended with some imports or when an older boat’s electrical system has been repeatedly “upgraded.”

Questions To Ask Before Hiring a Surveyor

Tom Benton, a marine surveyor in Oklahoma, considers it a red flag whenever a conversation with a prospective client begins with a discussion of price. “How much do you charge for a survey?” Benton acknowledges it’s a fair question, one that he expects to be asked eventually, but it really bugs him whenever it’s the first question. Other surveyors interviewed for this article echoed similar sentiments; it’s a fair question to ask after establishing a surveyor is qualified to survey the type of boat you’re considering. Here are some questions to ask before asking about price:

Several years of experience are no guarantee of competence, but, as with any profession, it’s a terrific start. Also, what marine-related experience does the surveyor have? A lot of surveyors came to the profession via boat repair yards, which is another plus; having done repairs for years gives the surveyor a good understanding of why and where a boat is likely to develop problems.

Aside from being a member of NAMS or SAMS (a few are members of both), a surveyor should be a member of the ABYC, which is the organization that writes the standards used by most of the major marine manufacturers. The NFPA is another standard organization that writes fuel and electrical standards for boats. (Note: The surveys themselves should include appropriate references to the standards.) Although very few surveyors belong, a membership in the American Society of Appraisers (ASA) is almost a guarantee that the surveyor takes a highly professional approach to valuations.

If you plan to be there during the inspection, be sure to ask if it’s OK. Most surveyors prefer you be there, if for no other reason than to make sure you understand whatever problems they encounter. However, there are a few surveyors who prefer to work alone.

Once you’ve found the best person for the job, ask about price and what’s included. Some surveyors want an up-front deposit and a few want to be paid in full. You may also be asked to sign a written agreement. As with any contract, read it before you sign.

This article was reprinted with permission from BoatU.S. Magazine, flagship publication of the membership organization Boat Owners Association of The United States (BoatUS). For more expert articles and videos to make your boating, sailing, or fishing better, visit Boatus.com.