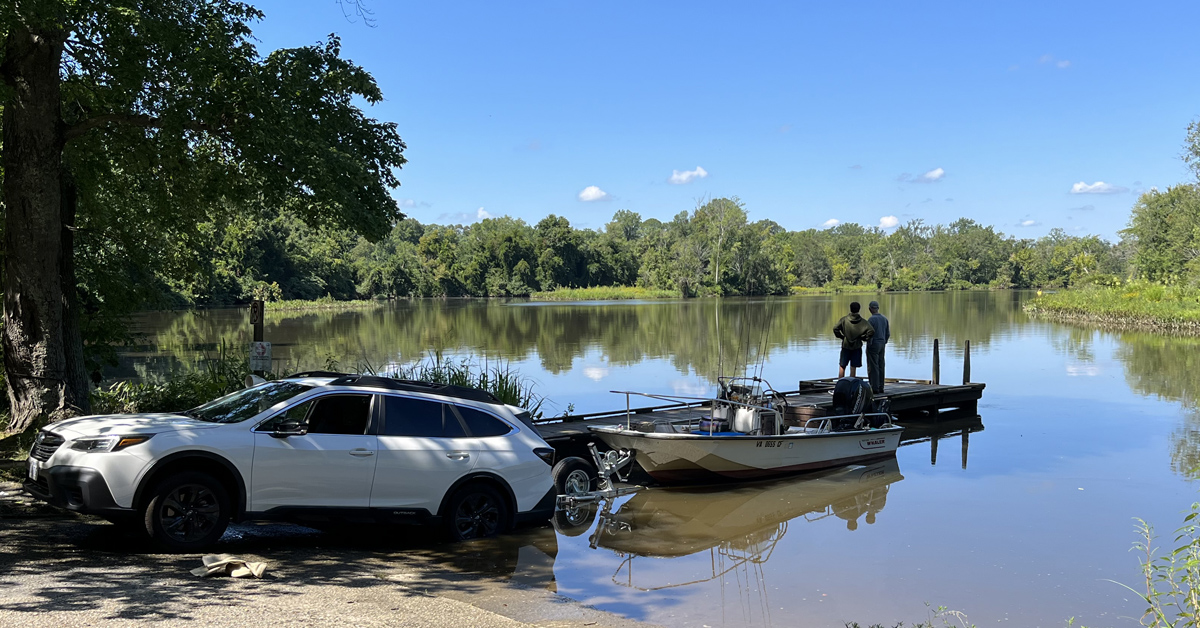 White Bank Park in Colonial Heights is a gateway to the beautiful, wild delta of the Appomattox River, just west of its broad junction with the James. The concrete ramp and pier, which are owned by the city of Colonial Heights and maintained by the Virginia Department of Wildlife Resources (DWR), lie on Swift Creek, half a mile downstream of the I-95 bridge, the point where the creek’s bottom reaches sea level and the water becomes tidal. The location is readily accessible from I-95 via Exit 54.

Swift Creek is a strong tributary, rising some 45 miles to the west in Powhatan County and flowing east through Chesterfield County, forming both Swift Creek Reservoir at the communities of Brandermill and Woodlake and Swift Creek Lake in Pocahontas State Park in the process.

Swift Creek joins the Appomattox a half-mile beyond White Bank, flowing through a maze of braided delta channels between islands of hardwood swamp and tidal freshwater marsh. The delta extends north and east for 6 miles to the confluence with the James. It’s ideal territory for paddling canoes and kayaks, and also deep enough for outboard skiffs up to 18′ or so. Note, however, that the tides are strong here, with average vertical changes of 2 ½ to 3 feet and currents up to two knots in either direction. The most appropriate tide station is Puddledock Sand and Gravel, nearby on the Appomattox mainstem. Low tide requires careful navigation in an outboard skiff, and paddling against the current can be a serious challenge, especially if the wind is up. 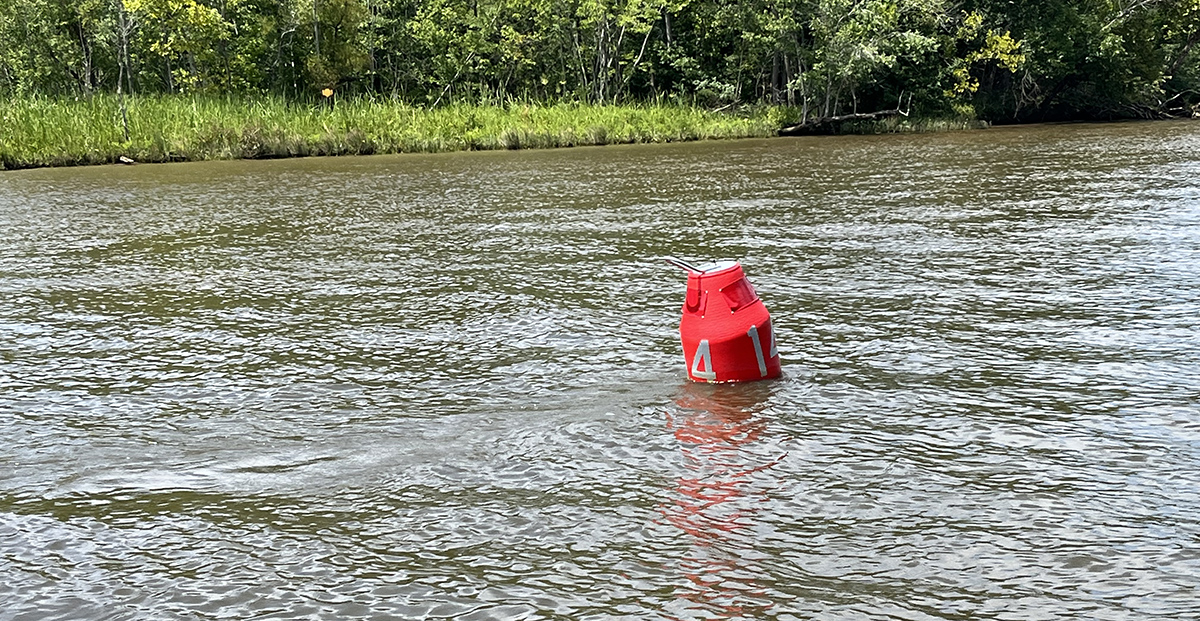 The current can be a challenge.

That said, there is much to see and think about here. Algonkian people began to settle here a thousand years ago, farming and hunting the uplands, fishing the river, and foraging the marshes for edible plants, furbearers, and waterfowl. Capts. Christopher Newport, John Smith, and others visited their Appamattuck town on their first exploration up James in May of 1607.

In 1620, a group of colonists settled on the peninsula between Swift Creek and the Appomattox that would become the eastern edge of Colonial Heights. They called the land “Conjurer’s Neck” after an Appamattuck healer who also lived there. A few years later, the Appamattuck people worked out an alliance with the English and moved a short distance west to the land that would become Ettrick. The whole area was originally a part of Henrico Cittie, an “incorporation” of the Virginia Colony surrounded by the tobacco plantations of English colonists. They included descendants of John Rolfe and Pocahontas, who had lived a short distance across and upriver at Varina.

Both lower Swift Creek and the Appomattox were navigable then for sailing ships, which called at local wharves for trade with England. These waters also saw lively regional trade extending up into the last century, with schooner packets and then steamboats connecting to Richmond and Norfolk. Even today, tugboats push barges of sand and gravel from the quarry at Puddledock out the dredged main channel of the Appomattox to projects up and down the James. (Be especially careful in a small boat around these rigs, which have the right-of-way in their tight channel.)

In 1749, the House of Burgesses designated the portion of Henrico Cittie south of the James as Chesterfield County, including Conjurer’s Neck. The community received the name Colonial Heights after the Revolution because the Marquis de Lafayette’s French troops, known as the Coloniels, had deployed artillery on the heights overlooking the Appomattox and British troops in Petersburg. It remained a part of Chesterfield County until 1948, when it became an incorporated city. Today, Colonial Heights is part of the bustling Tri-Cities area, including Petersburg and Hopewell, plus adjoining parts of Chesterfield, Dinwiddie, and Prince George Counties and the U.S. Army’s Fort Lee.

Even so, Swift Creek and the Appomattox delta feel like a world apart, especially when traveling through narrow cuts like Rosemary Lane, Broad Street (which is not deep), and Pye Alley. It’s a useful safety practice to carry a GPS chartplotter or phone with chart app to keep track of where you are. Because both the river and the creek drain large watersheds, massive amounts of fresh water flow down them, so the salinity in these upper tidal waters is always near zero, allowing diverse communities of bottomland trees and seed-bearing marsh plants to thrive.

The delta thus serves as a veritable food factory for waterfowl and fish. Bald eagles and great blue herons live here year ‘round, while other fishers like ospreys and great egrets spend spring and summer here. It’s fascinating to watch these marshes develop over the summer. Broad-leaved pickerelweed grows along the water’s edge and puts up its finger-shaped purple flowers, while wild rice further back in the marsh puts up leaves and stalks 6 to 8 feet high, with stove-brush-shaped ivory flowers that turn into brown grains in September. Through the fall, waterfowl and other migratory birds feed on the bounty, with many ducks and geese settling in for the winter. These protected waters offer interesting explorations for fall hardwood colors and winter birding, provided boaters exercise prudence with seasonally appropriate safety precautions. 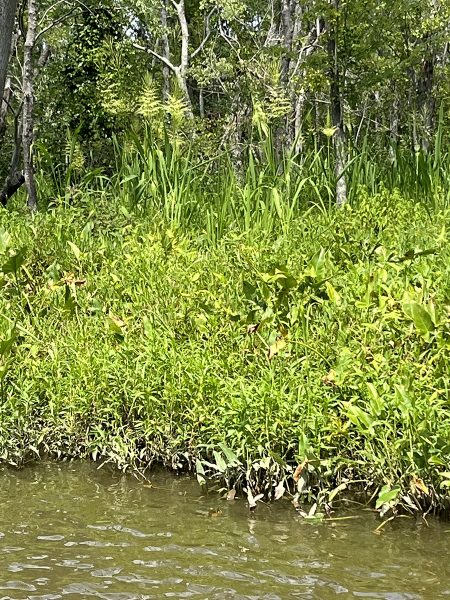 The marshes on the edges of the Swift Creek and the Appomattox delta provide excellent wildlife viewing.

Spring brings rebirth in the marshes, along with spawning fish like river herring, shad, and striped bass (rockfish). Before you cast a line for them, though, be sure to check the appropriate licensing and harvest regulations at DWR and the Virginia Marine Resources Commission (VMRC). Resident fish include largemouth bass, blue catfish, various sunfish (bream), and crappie, along with occasional visitors like walleye from Lake Chesdin, an impoundment upstream on the Appomattox.

In spring and especially fall, you may also be treated to the sights and sounds of spectacular breaches (leaps) by five-to-six-feet-long male Atlantic sturgeon as they join their even larger female mates on spawning runs.

Yes, Virginia’s Tri-Cities bustle with urban and suburban activity, but the launch ramp at White Bank Park opens up an extraordinary natural resource in its midst for exploring by small boat.  For birders and anglers especially, there is no bad time to visit.  The delta of Swift Creek and the Appomattox River is a gem hiding in plain sight.