How Virginia’s Deer Change in December and January 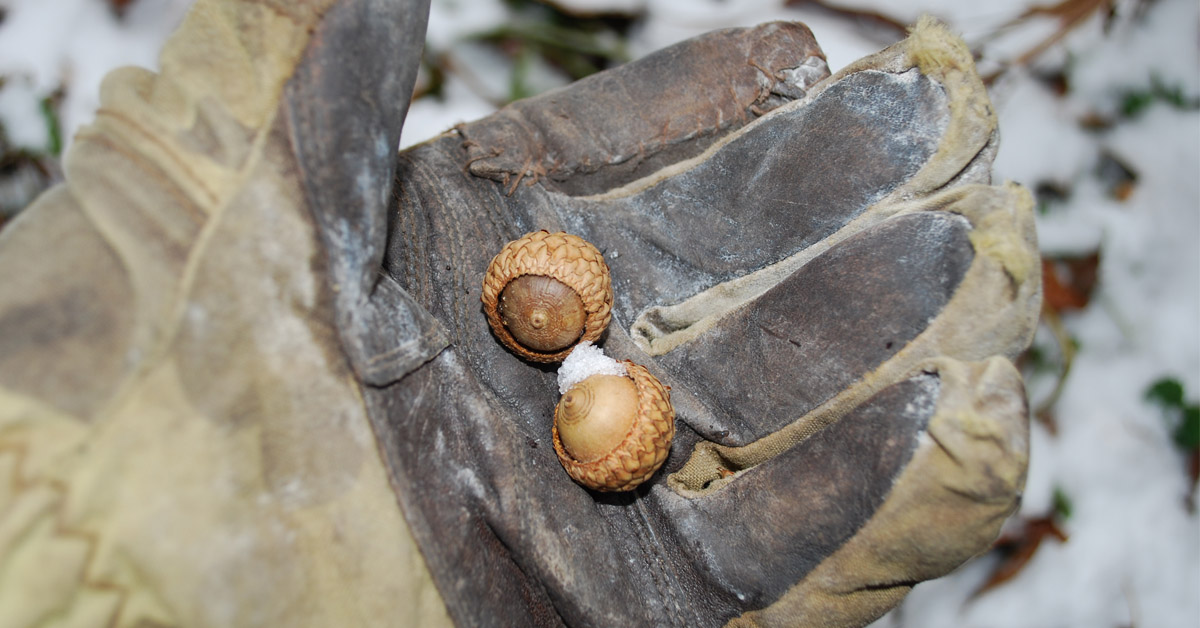 Scarlet oak acorns, as well as other hard mast from red oak family members, can be an important December and January food for whitetails.

Whether you’re a hunter, photographer, or wildlife watcher, Virginia’s whitetails are fascinating creatures. So after the rigors of the rut and the onset of winter in December and January, how do whitetails change? Katie Martin, DWR’s deer, bear, and turkey biologist, offers insight.

“For deer after the rut, it’s all about survival, and that means finding food,” she said. “The stress of the major breeding period has ended, but deer are now entering the hardest time of the year for them. They have to find enough calories to survive without expending too much energy to find that nourishment.”

Deer are crepuscular, meaning that they are most active at low light, and come December they still, generally, move mostly during the dawn and dusk periods. But, said Martin, snow and/or intense cold and high winds can make them travel more at the warmest times of a 24-hour period. This is why we often glimpse deer roaming now in the middle of the day.

“Hunting pressure, especially the ongoing gun seasons east of the Blue Ridge, can affect deer movements, too,” the biologist continued. “But in Western Virginia, hunting pressure is much lighter now, so the deer there are much quicker to resume normal activities. There’s also less agriculture in the west and more mountainous public land, so deer often have to move more to find food.” 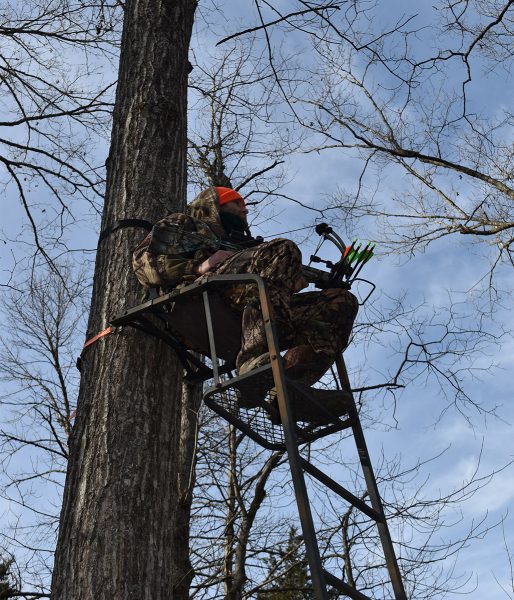 A late-season Virginia bowhunter braves the cold in hopes of seeing a whitetail.

Another fascinating behavior, said Martin, is that whitetails return to segregating themselves sexually. For example, a 3-year-old maternal doe may travel with both her offspring from the past two years as well as the 2-year-old doe’s young. It’s also possible for non-related females to join these groups. This is why we often spy seven or eight deer together on some days, but on other outings may not glimpse any whitetails at all. Bucks resume bachelor groups as well. Also of great relevance, says the biologist, during penetrating cold, the percentage play for deer may be not to move at all.

Additionally, they are far better than humans at sensing cold weather and a plunging barometer coming, so that is why there may be intense movement right before a front or a northeaster. Nelson Lafon, the DWR’s forest wildlife program manager, states that that during colder weather, deer often bed down on south facing slopes to take advantage of solar heating. 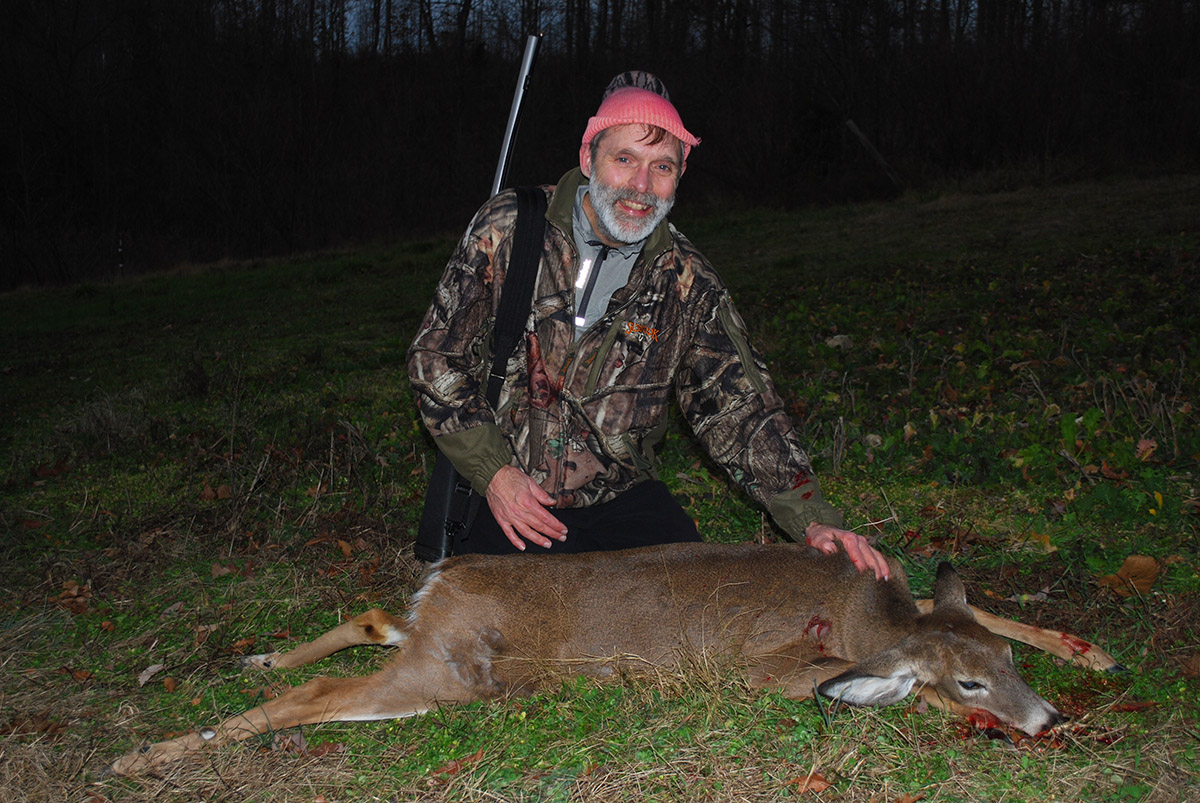 The author with a late-season Roanoke County doe that he harvested with his muzzleloader.

Food sources can also be quite different come December. By winter, most years, acorn crops have been mostly or all consumed, especially the white oak acorns such as those from the white, post, and chinquapin family members. For the white oak species, the exception is the large, high in tannins acorns that the chestnut oak produces. Red oak family members also engender acorns high in tannic acid, so mast from these trees will sometimes still lie among the forest duff, too.

“We’ve experienced a very heavy acorn crop this year, so it’s very possible that this December, deer will still be found in areas where there are chestnut oaks and various red oaks such as the Northern red and black oaks,” Martin said. “A person who is good at tree identification would certainly have an advantage in finding deer.

“Beyond acorns, December foods often include lower quality items such as greenbrier, honeysuckle, privet, and the variety of browse that can be found in young forests. Look for deer in crop fields, field edges, and edge habitat in general. Green fields and openings where wheat, oats, or rye have been seeded are possibilities. And in suburban Virginia, people’s yards are a deer destination as well,” Martin noted.

One of the most intriguing aspects of whitetail biology is why do some Virginia fawns enter into estrous in December?

“Whether a doe fawn breeds in December during the so-called “second rut” is all about body weight and condition,” Martin said. “In our state, based on DMAP [Deer Management Assistance Program] data, fawns have to weigh about 70 pounds to enter estrous. In the north, the magic weight is about 80 pounds. In a year like this with a heavy acorn crop, we may see more fawns breeding, which usually occurs during the second and third weeks of December.

Another factor concerning the December breeding period concerns how many adult does did not mate. Martin says little data exists on what percentage of mature females may not breed in any given year. In any event, come December this year, hunters, photographers, and wildlife watchers should expect to see fresh rubs and scrapes. Yet another fascinating event to observe for an endlessly fascinating animal.