All the hunters pictured below took part in the Virginia Department of Wildlife Resources’ (DWR) Youth and Apprentice Deer Hunting Weekend on Sept. 26-27. DWR reminds hunters to keep safety in mind when going afield:

Be sure of your target and beyond. Always keep firearms pointed in a safe direction. Wear blaze orange or blaze pink. BE SAFE, BE SEEN. 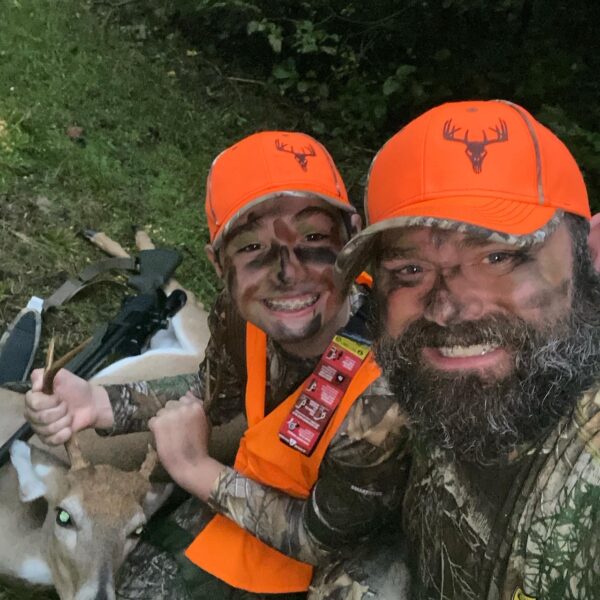 From Jeff Poulin: My son, Marko, and I hunted during rifle season last year but he didn’t harvest anything. I took my 12 year-old son out during the youth weekend. Saturday was a little wet in the morning and we didn’t see or hear anything that day. He became discouraged. Once we returned to the house our trail cam started showing improved deer movement at our spot. It was an encouraging moment for him.

We woke early and unfortunately bumped a couple deer out of the field upon arrival to our stand. We quickly climbed into our position and waited for the lighting to improve. We heard numerous deer around us walking in the woods. Eventually, we saw the silhouette of the deer against the woods. The light was poor and we couldn’t tell initially what type of deer he was. He stayed there grazing on the clover and grass for about 10 minutes.

Everything was lightening when a nice sized doe and a fawn also arrived at the opposite end of the field. Previously I’d discussed with my son the ethics of shooting a doe with a small fawn in tow. Both the doe and buck made their way to the center of the field. The fawn went to play with the buck, who was having none of it. The buck stomped at the ground near the fawn. The fawn bolted into the woods. About a minute passed when the doe froze and stared straight at us in the stand. She paused for about 15 seconds, snorted loudly and jumped into the nearby woods.Dread filled my mind as I figured the buck would follow suit and wind us as well. He didn’t smell us and continued to forage. I had my son get his gun ready and we went over the fundamentals of marksmanship. He said he had a good sight picture, I whispered for him to breathe in, breathe out, pause, and squeeze……..BOOOM! He took his shot.

The day before we extensively went over his shot placement because of the height of our stand and how the trajectory would be affected. His shot was true. He hit the buck cleanly and dropped him at that spot. It didn’t bolt and didn’t suffer.

Nothing compares to seeing the elation and pride in your child taking their first deer. He was shaking with adrenaline and excitement at what he had just done. But he quickly learned that the hunt was only the first part…. he also experienced the visceral nature of field dressing and skinning the buck.

It’s a great thing to teach your children that food comes at a cost. That the animal‘s sacrifice will provide for his family. This moment will teach him that this living thing is now gone so we can thrive. We had to discuss his feelings of remorse as well as his happiness at taking it. Too many people often forget the meat in the grocery store also was once living. It didn’t just arrive packed and butchered all pretty. He’s grateful for the experience and is looking forward to the upcoming hunts. 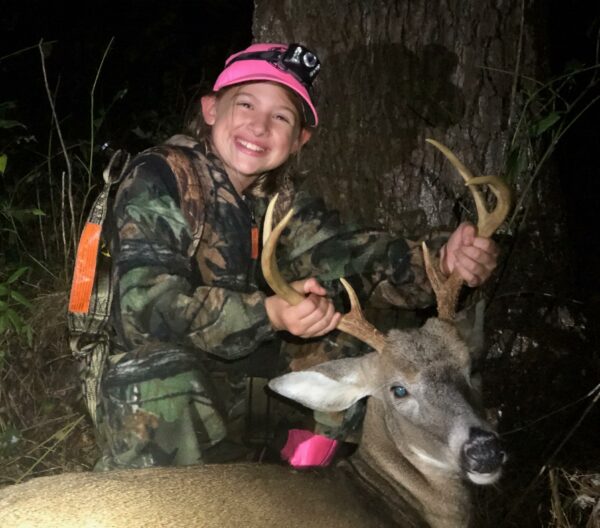 Reese Ostlund and her seven-point buck.

From DWR Conservation Police Officer Ian Ostlund: I took my daughter Reese hunting for the youth opener in the morning and had this buck get past us. Then I got called out to work and had to end our hunt prematurely, which spooked other deer approaching our stand. Reese was sad but understanding. She understands the sacrifices that my job sometimes demands.

I ran K9 Reese on four tracks during a long day at work, barely getting off in time to get back in the stand for an evening hunt with Reese, in the same stand as the morning’s hunt. We saw 11 deer, the last of which was this one, the same buck that snuck by us in the morning. My daughter was so excited and told me that even though we missed an opportunity that morning she remained optimistic throughout the day, despite ribbing from her older brothers. She said she knew that we’d get another opportunity that evening. She clearly gets that kind of optimism from my wife! On top of that, days earlier she announced that her goal this season was to harvest a seven-point buck.  It was a great day for team Reese! 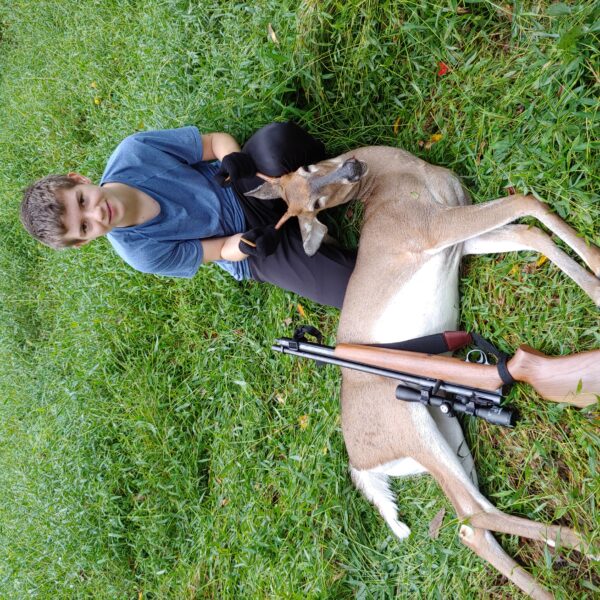 Ian Abraham and his spike buck.

From Daniel Abraham: Ian Abraham, 12, of Lovettsville took his first buck and first deer with an airgun on youth weekend.  At 40 yards, he took the only shot that was presented (facing away) and hit the deer in the spine, dropping it immediately.

Ian is an accomplished marksman/hunter who never ceases to amaze me with his abilities. I love the opportunity to help in his apprenticeship and in this hunt to also physically watch over him in the tree stand (same tree, different stand).

Incidentally, when Ian was 6 years old he shot another deer (that got away) for honorable mention in the in 2015 Virginia Wildlife magazine photo contest. 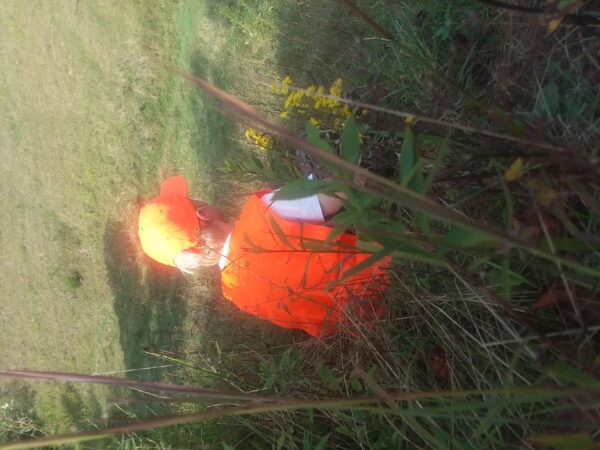 Mason Danner waiting for a deer.

From Steven Danner: This is Mason patiently watching a field for a deer during the afternoon on the youth deer hunting weekend. We saw several deer that afternoon and he had a shot opportunity, but missed in his excitement to bag his first whitetail. It was a great experience for both of us and we can’t wait to get back out again soon! 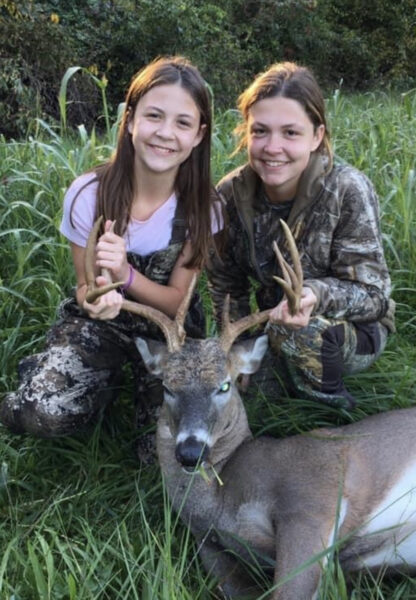 Morgan Thacker, 11 (left), harvested her first deer with a crossbow while hunting in Washington County. Her older sister, McKenzie Thacker, 22 (right) served as her guide for the hunt. 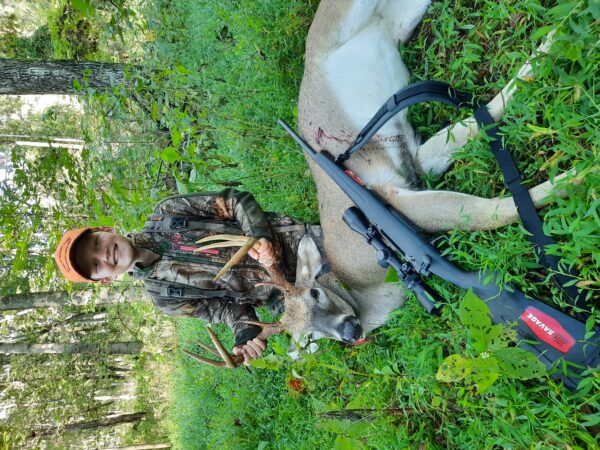 Oscar Esposito with his buck.

From Richard Esposito: My son, Oscar Stewart Esposito, got his first deer on Sunday of the Virginia youth weekend. He passed on a lot of deer over the past two seasons that either didn’t present a good shot or were not old enough, but when this guy stepped out it was one way to get it done. 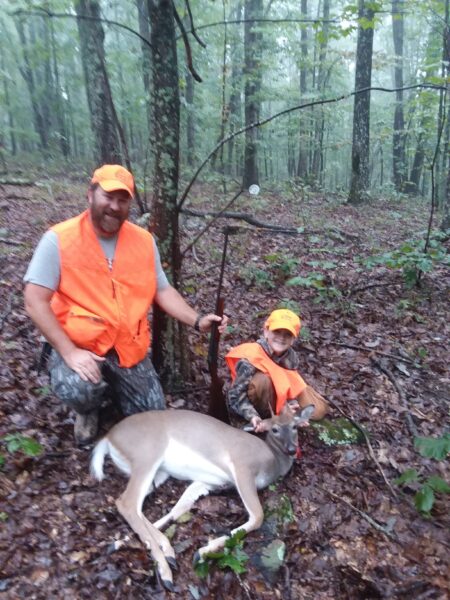 Zak White (right) with his deer and father, Chris (left).

Zak White (right), age 8, got his first deer during Youth Weekend while hunting with his father, Chris in Franklin County. 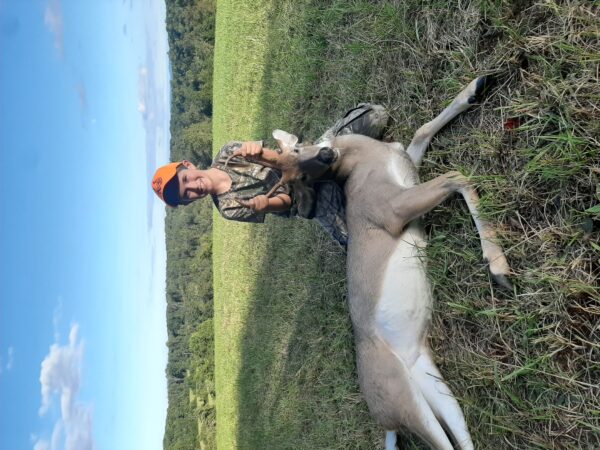 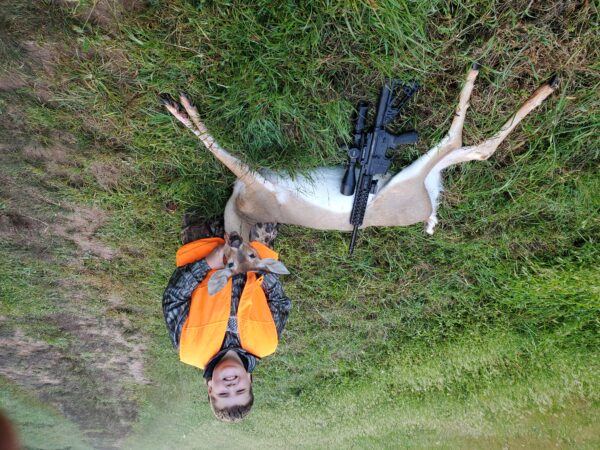 Levi Bailey is all smiles with his harvested deer.

From Brandon Bailey: The attached photo is my son, Levi Bailey. Levi Bailey is 8 years old and an avid outdoorsman already. He is either fishing at our family pond, hunting, practicing shooting, or chasing some sort of wildlife nearly every day. He’s a huge part of the enjoyment that I get from hunting and fishing these days, getting to watch him learn and be successful in his outings. The smile says it all—this is his first deer this year, second deer he’s harvested in all as last year was a button buck.

Thanks to you folks and for all you do to keep us safe and keep the outdoors enjoyable.