Hunting Interrupted by a Hot Pursuit 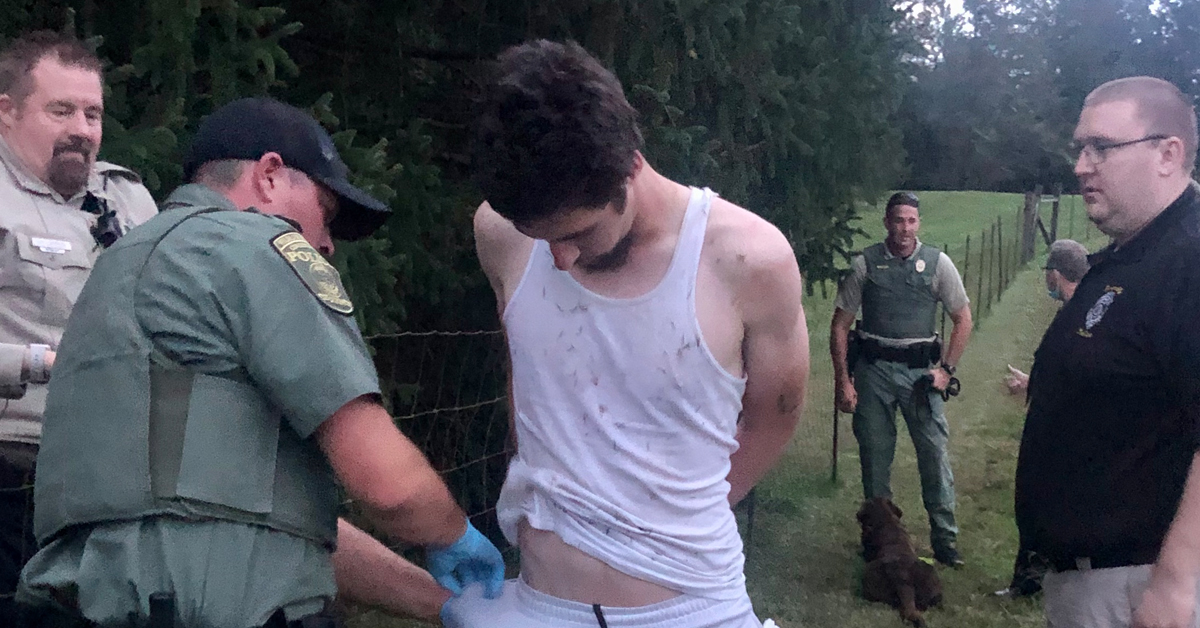 On the evening of October 28, I was archery hunting on a farm in southern Cumberland County with a group of friends. At approximately 4:05 p.m., one of our party stated that they heard what sounded like a vehicular crash out on the main road and we all heard a lot of sirens. About 30 minutes later, I saw a small doe come running toward my stand. With the rut commencing, I was watching for a buck to follow.

Shortly thereafter, two more adult does ran within a few yards of my stand, stopped, and were intently watching their back trail. They trotted off as I kept watching the area they came from. In just a couple of minutes I saw movement and some flashes of brown and white moving through the understory toward my stand. As it got closer, I saw much to my surprise that it was a man wearing a white shirt and brown pants. He walked right under me (I was 28′ high in my climbing stand). I immediately noticed that his pants were ripped and torn, he was dirty, and he was winded as he bent over with his hands on his knees to catch his breath.

Upon seeing this, I realized that he was running from the “crash” and sirens that had been heard earlier. Realizing that I could not climb down easily, quickly, or stealthily, I chose to remain silent and watch where he went to be able to guide the local law enforcement to him.

Once he was out of sight, about 50 yards from my location, I called 911 and spoke with the Farmville Police Department. I asked them if they were looking for anyone and told them that he had just walked under me. I told the dispatcher to have Chief Ellington call me and I would direct him and the responding officers to the last known location. Being familiar with the property, I was able to direct the officers to be in a position to surround the area he was last seen.

I climbed down as quietly as I could and met with officers, and we searched the area for him with no luck. There were several routes he could have taken to continue his attempted escape, and due to limited visibility from my stand I wasn’t able to see which way he’d gone. I asked Chief Ellington and Sheriff Epps if they had a dog available and they stated that they have tried everywhere and could not locate one. I asked if they had tried to reach one of the Department of Wildlife Resources’ (DWR) K9 Conservation Police Officers and they had not.

I contacted DWR dispatch and found that Officer Tyler Blanks and his K9 Bruno had been assisting Officer Kevin Webb and were only 35 minutes away. I had them respond. Upon arrival, I took Officer Blanks and Bruno to where the fugitive had walked under my stand. This area had not been contaminated by any officers since we started at the location where he was last seen by me.

Bruno quickly picked up the scent and we were off to the races. Bruno took us right past the local officers, around a pond, up a hill, and through a soybean field to the main driveway. It’s possible the fugitive hid in that area a while, so Bruno took a moment to re-orient himself and find the freshest scent track. As he was doing that, CPO Webb pointed to a person across the field, and I told them that was him. We quickly followed Bruno to the fugitive who was captured without force or incident.

The suspect was one of four individuals that were in a stolen vehicle out of Henrico County that crashed while being pursued by law enforcement. All four individuals ran from the scene in different directions. All were captured by 9:30 p.m.

Chief Ellington and Sheriff Epps were impressed with the capabilities of Officer Blanks and K9 Bruno. All of the officers on scene spoke highly of Bruno and were amazed at how quickly the fugitive was apprehended after they arrived on scene.

I can truly say that although my hunt was ruined for the evening, I have never “harvested” a fugitive while hunting. It was definitely a hunt that will never be forgotten.