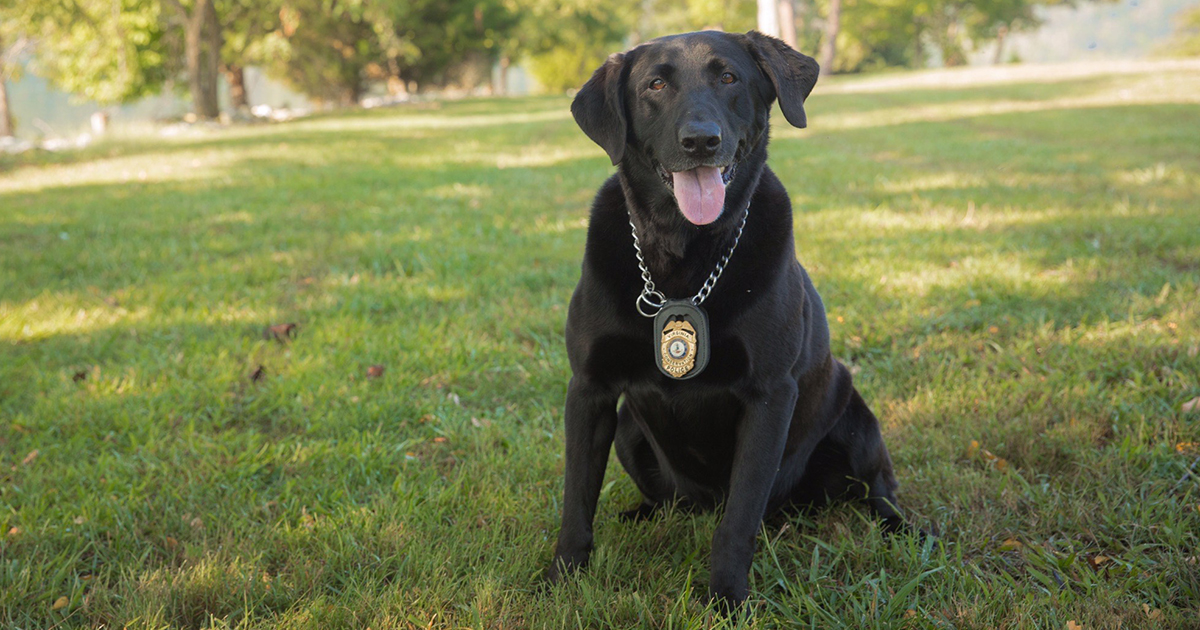 Justice, a K9 Conservation Police Officer that served nine years for the Virginia Department of Game and Inland Fisheries (DGIF), officially retired on January 22. Justice and his handler, Sr. Officer Wayne Billhimer, worked together since January 2011. 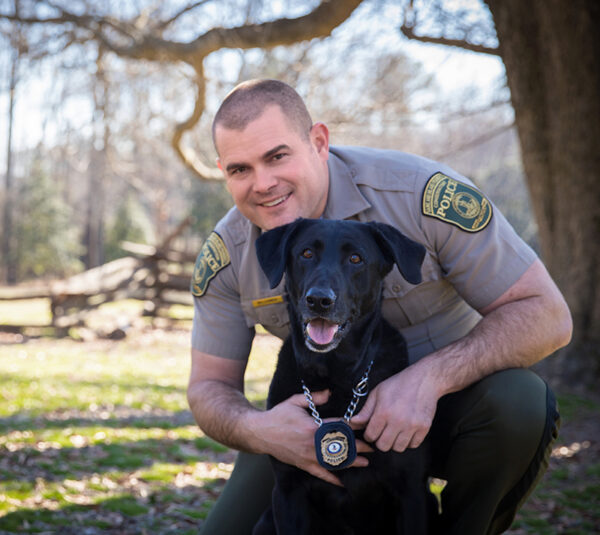 “Over the past nine years, we’ve been lucky to have worked on several outstanding cases together,” said Billhimer of Justice. “The one that stands out to me is tracking a lost 12-year-old girl out of Staunton. Justice was able to track straight to her and bring her back to her family.”

“K9 Justice was an exceptional member of the DGIF K9 unit,” said Major Scott Naff of the Virginia Conservation Police. “Justice quickly learned his duties and then some. He was even rumored to be able to count creeled trout on the trout streams. He was extremely loyal to his handler, Sr. Officer Wayne Billhimer. Justice was an exceptional tracker and once tracked a turkey poacher for over three miles through rugged mountain terrain until officers located him with a silenced rifle and illegal turkeys. Justice was great with kids and the public, and was frequently requested to attend programs and events across the state. Justice was also the co-star of the extremely popular lip-sync video that was part of the Facebook law enforcement lip-sync challenge.”

Justice is a 9-year-old black American Labrador Retriever, and was one of the dogs used to start the DGIF K9 CPO program in 2011. “There are a lot of reasons he’s special, but one is his drive. He’s very energetic. He has the personality to want to please. I believe his drive and willingness to work make him one of the best dogs for the job,” said Billhimer. 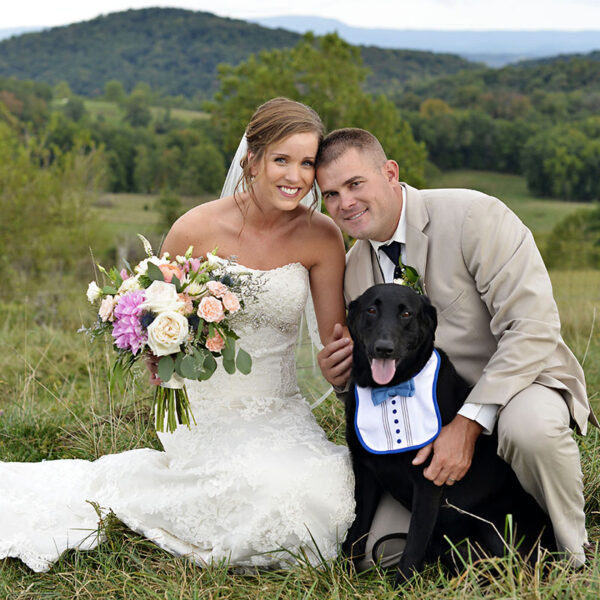 K9 Justice with CPO Wayne Billhimer and his wife, Molly, at their wedding, where Justice was the ring-bearer.

“We go everywhere together, whether we’re patrolling together or even on our days off. Justice is more than a K9 police partner; he’s part of the family. Any time the door opens, he’s with me,” Billhimer continued. Justice was even the ring-bearer for Billhimer’s wedding. “He’s my buddy; he sleeps in my bed. He doesn’t know what his outside kennel looks like even though the state bought him one. He’s part of our family.”

While Justice excelled at tracking fugitives and lost persons, he was also an exceptional representative of the DGIF K9 CPO program. “Everyone wants to come up and meet Justice,” said Billhimer. “He loves the extra rubs on the head and he enjoys the public. It’s a great bridge to bring the public to learn about the mission of the Department of Game and Inland Fisheries. Having him there starts a conversation that probably wouldn’t have happened without having Justice there.”

Justice’s retirement from CPO work came earlier than planned, as he was diagnosed with cancer in late 2019.  After surgery to remove a tumor, he started a regimen of chemotherapy. “He’d just re-certified in tracking, area search, and wildlife detection recently,” said Billhimer. “If you didn’t know his diagnosis, you’d never know. He still runs and jumps and plays and is the normal Justice, so we have high hopes that the chemo will work.”

Upon his retirement, Justice was officially adopted by Billhimer and his wife.  “I’m proud to say he’s officially part of our family now, although, honestly, that’s how we’ve always seen him,” Billhimer said.

If you’re interested in helping support Justice in his retirement and cancer treatment, the Ward Burton Wildlife Foundation has started a Caring for the CPO K9s fund. Donations will help DGIF’s K9 program and handlers of retired dogs like Justice with veterinary bills, wellness-related costs, and more. 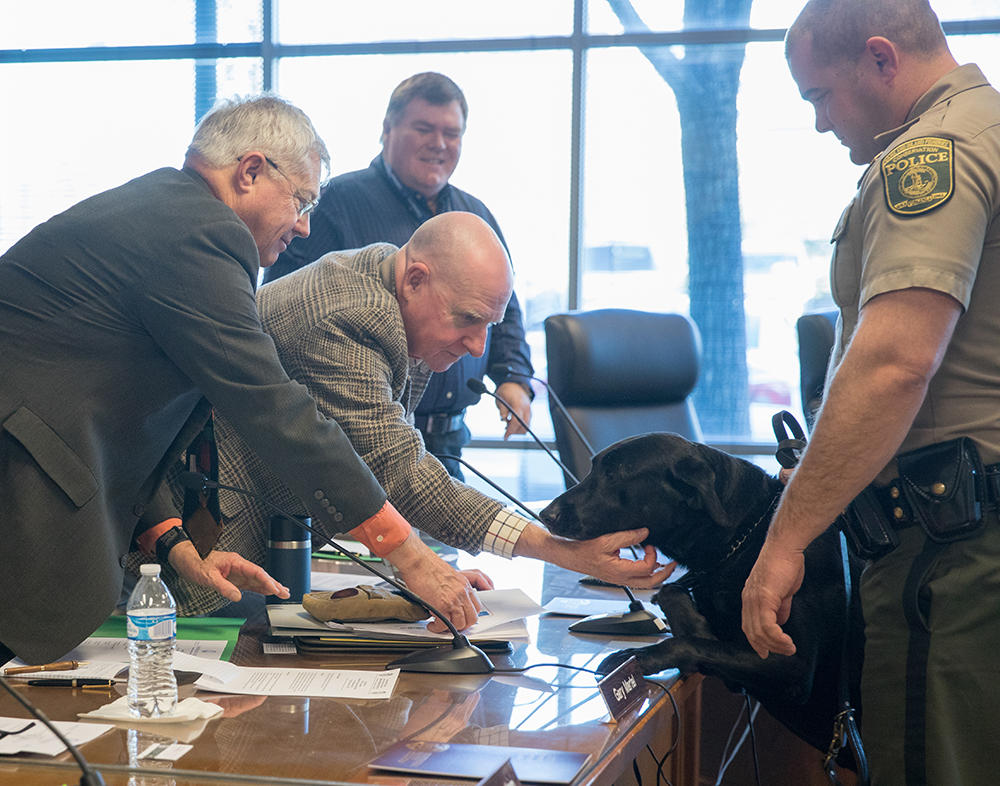 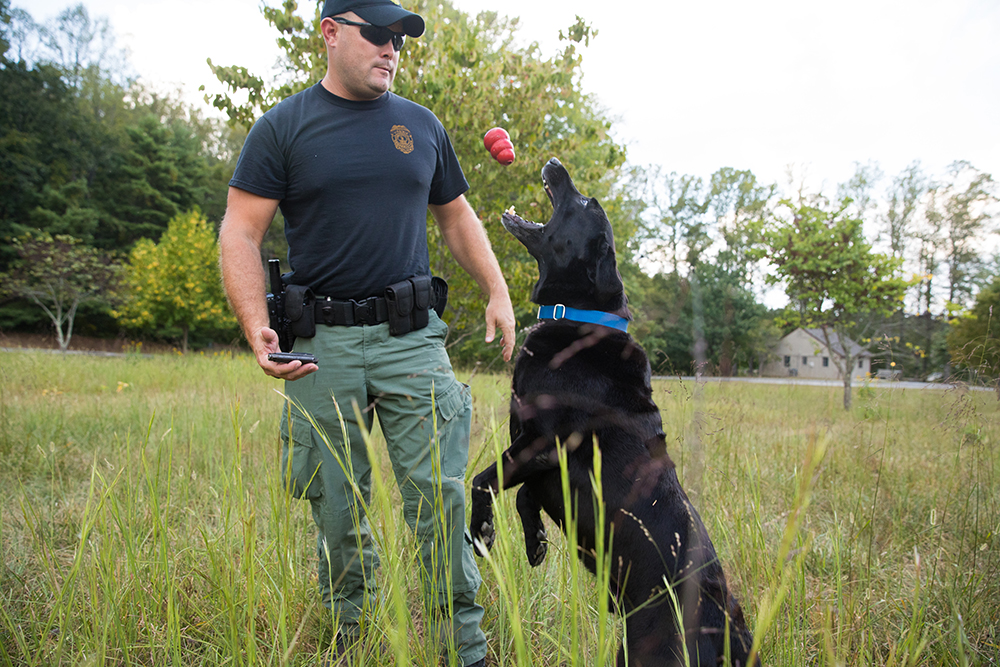 K9 Justice and Wayne Billhimer during a training session.