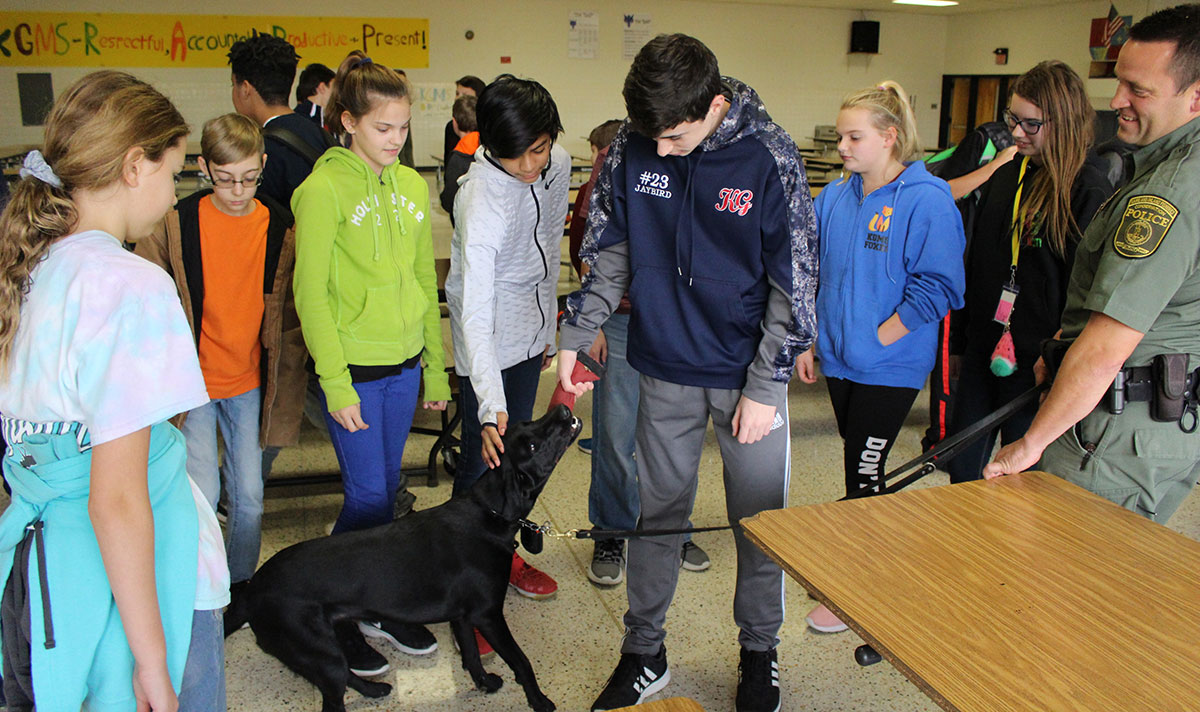 CPO Patrillo and CPO Cramer visited the King George Outdoor Club students at King George Middle School on November 30th and brought with them their four legged partners. Both officers addressed the crowd of 45 youth about their jobs as K-9 Officers for the Virginia Department of Game and Inland Fisheries. They started out by telling the youth what game wardens do. Game wardens are called Conservation Police Officers in Virginia and have full police powers, but their focus is on enforcing laws and protecting wildlife and fish as well as the public while enjoying hunting, fishing, trapping and boating in Virginia.

The officers explained to the youth that their jobs did not have set hours and they were often up early and home late, but they love what they do. One of the youth asked where their office was located. Both officers looked at each other for a moment and chuckled before they told the kids that their office was wherever the job took them, but mostly their office was in their truck where they had a laptop and their gear. 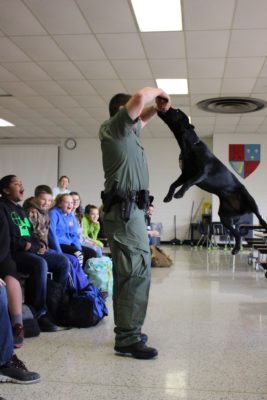 At that point, Officer Patrillo was getting some attention from Bailey, his K-9 partner. She was tugging at his uniform waiting to be introduced to the interested group of youth. Bailey, a black lab, is nearly two years and is just starting her career as a K-9 officer’s partner. She has already made some great cases for DGIF. She actually helped a local sheriff’s office complete a homicide investigation. She alerted in a driveway where a suspect lived and kept trying to go behind the house. Her initial alert indicated that a shooting took place in the vicinity. When she tried to go behind the suspect’s house the suspect told the officers he no longer wanted them on his property which, of course, was suspicious.  The sheriff’s department was able to obtain a warrant and Baily led the officers behind the house to a shed where she entered, and used her nose to lift a cushion on a sofa that was inside the shed. The firearm was right there.

In another incident, a dead doe was found by a CPO found in the woods on a “buck only” day. Officer Patrillo and Bailey were called. She tracked from the doe for a half mile through the woods to a clearing and tire tracks. Officers decided to stake out the spot and not long after dark, a car pulled into the clearing and the officers were able to catch the poacher that was trying to come back to collect the deer.

Bailey has a lot of drive and loves to work and she loves to play too. Officer Patrillo told the gathered youth that Bailey is trained in finding game, ammunition, firearms and other objects people have touched and she can also find people that are lost or are trying to avoid detection. Once she does her job she enjoys her playtime with her toys. After explaining what Bailey’s job was, Officer Patrillo started his demonstration. He had a duck hidden in a student’s book bag and then he turned Bailey loose after he outfitted her with her “work” collar. She immediately went searching and after a few minutes shoved her nose into the bookbag that was among 45 others and sat down while looking at her handler. The kids loved that. At that point it was reward time and Bailey was praised before being offered a tug of war toy. She played tug of war with Officer Patrillo and then started jumping up to grab the toy as he continued to try to talk to the youth. The youth were given the opportunity to play tug of war with Bailey. They were really surprised how fit she was! 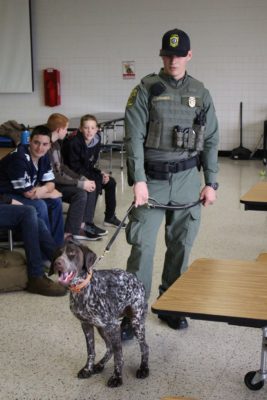 Officer Cramer took the floor to explain that he is now in training to become a K-9 Officer too and his dog is a German Short Haired Pointer (GSH) named Waylon from Hardwood Kennels in Missouri. Waylon was purchased and donated to DGIF by the Commonwealth Criminal Justice Academy in Fredericksburg. He is a year and a half old and full of energy like most bird dogs are. Officer Cramer pointed out that K-9 Officers want high energy dogs with lots of drive. Anyone who knows what GSH Pointers are, knows they can work all day long and still want to keep going. Officer Cramer and his dog Waylon will be going to the K-9 School in Indiana in February. The school is nine weeks long and both dog and handler are put through their paces. Meanwhile, Officer Cramer is doing some training on his own with his dog and getting the dog used to riding in the vehicle, working and interacting with the public and other dogs.

Once off duty the dogs live with their handlers and their families. Both men stated that being a CPO is a dream job, but being a K-9 CPO was even better. They love helping their fellow CPOs solve cases and they enjoy seeing their dogs work.  K-9 Officers have to be committed to their job. They are constantly training and working their dogs to keep their skills sharp and there are only five in the entire state. They can get a call to go help a fellow officer over a hundred miles away. The hours are long, but the satisfaction is worth it according to our guest speakers. We were thrilled to have them come visit with and educate the youth in King George Middle School Outdoor Club. Their presentation was very interesting and very professionally done. It is good to know that DGIF has some four legged officers that can help keep poaching and trespassing to a minimum!