Learning is the Focus of Hunter Skills Weekend 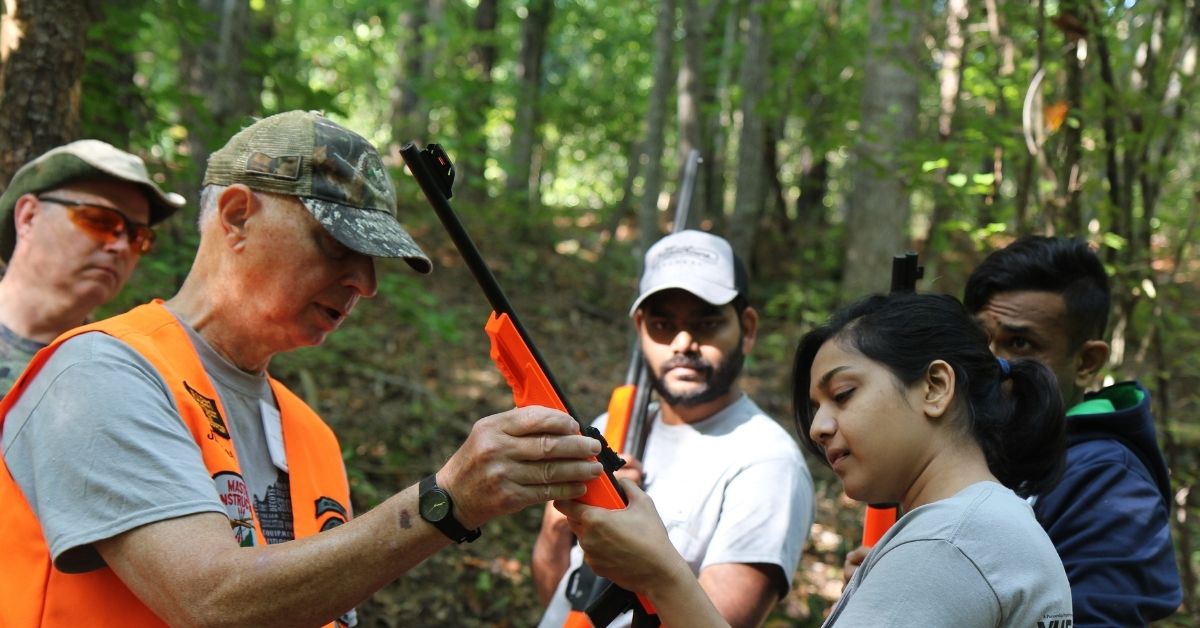 Rekha Raj participated in the 2019 Virginia Hunter Skills Weekend to learn more about hunting and the outdoors.

By most measures, Rekha Raj is the last person you would expect to see at a beginning hunters’ workshop. Women make up less than 20 percent of all hunters. A considerably smaller percentage of suburban residents are likely to hunt. Immigrants and their children? They are almost non-existent in the autumn woods.

In fact, Raj had never set foot in the outdoors with a gun or bow in her hands prior to the Hunter Skills Workshop last September. She hadn’t even shot a gun.

Why was she there?

“My husband wanted to try hunting. I got interested when he did. I was looking for something totally different and this was definitely different than anything I’ve ever done,” says the 43-year-old software engineer from McLean, adding, “We also both like wild game. I thought maybe this is how we can learn how to get it ourselves.”

So she and her husband, Krishna Reddy, along with their friend Buchi Tarigoppula, bought compound bows and signed up for the weekend-long workshop. Her goal wasn’t necessarily to go straight from the workshop to the woods with her bow. Instead, she was mostly testing the water. A few days after the event, she had no doubts: Raj was ready to take the plunge.

“We are planning to do some small game hunting and Krishna has been deer hunting already. I had an emergency appendectomy, so I wasn’t able to hunt, but before that I was shooting my bow almost every day,” she said a few months after the workshop. 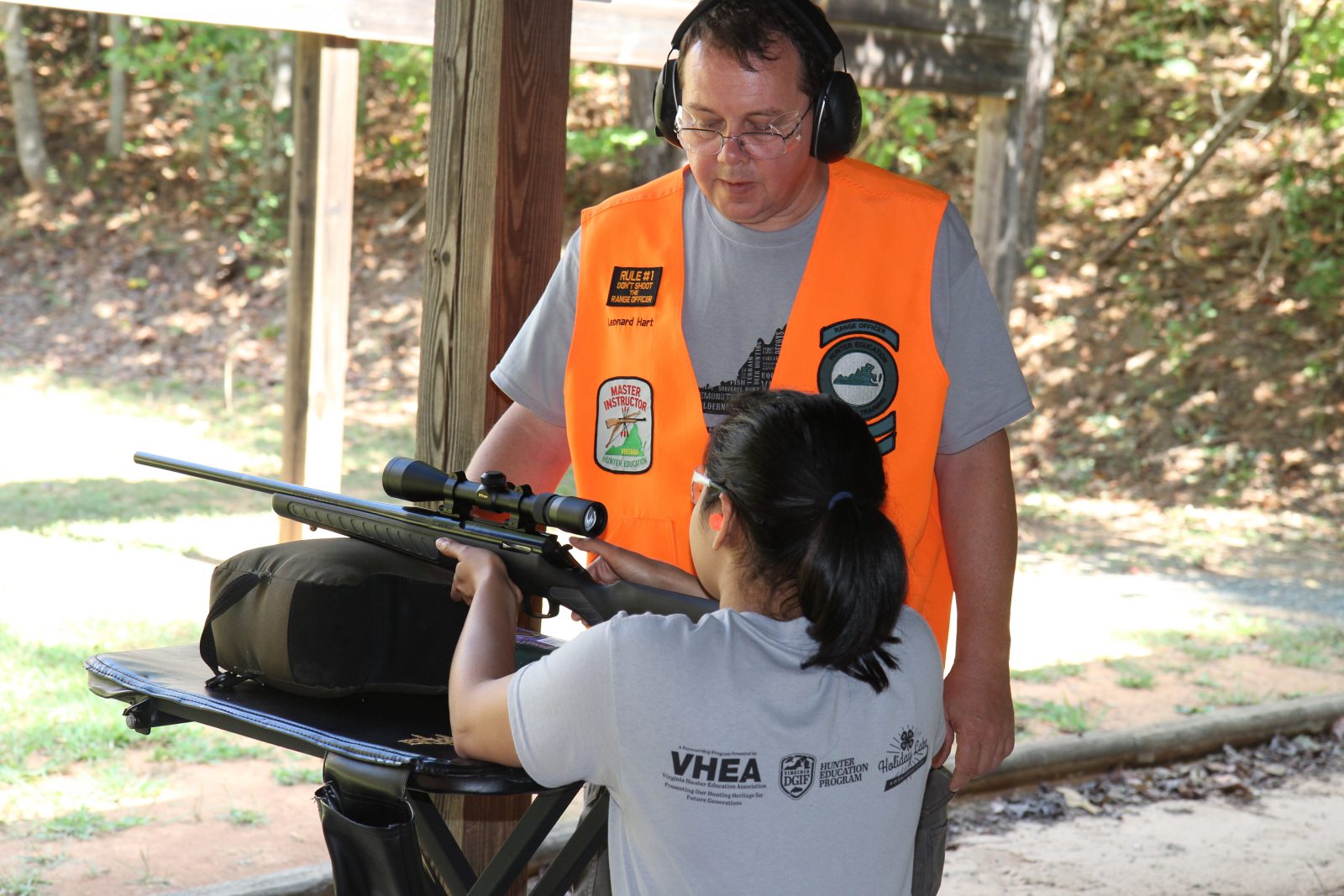 A Great Place to Start

That’s not unusual. Although not everyone that attends the Hunter Skills Workshop ends up a lifelong hunter, most at least give it a try. The workshop is designed for people like them, but program co-coordinator Wendy Hyde says anyone can attend.

“All you need is a desire to learn more about hunting. We won’t turn away anyone who wants to learn, but our target demographic is beginners who may not have someone to teach them, but who want to learn how to get started in hunting,” she says. 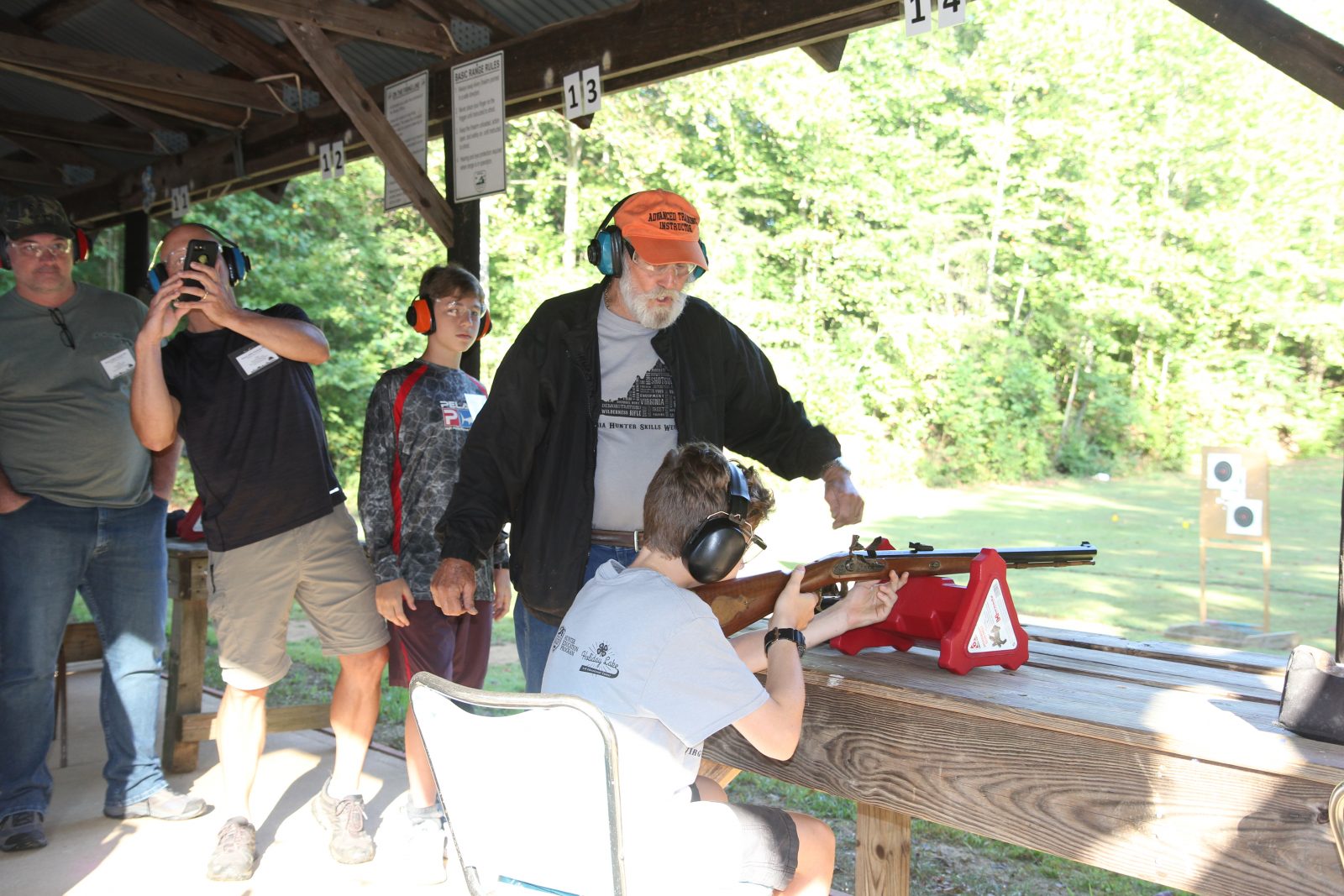 The workshop actually started in 2009 for that very reason. Hyde says a single mother was struggling to find an outlet for her son who wanted to learn how to hunt. The woman told her story to a friend who also happened to be a hunter education instructor.

The workshop, a partnership between the Virginia Department of Wildlife Resources (DWR), the Virginia Hunter Education Association and Holiday Lake 4-H, was born from that conversation. It now consists of in-depth seminars that cover a wide variety of hunting and shooting activities. Taught by certified hunter safety instructors with years of experience, classes typically have two or three instructors per group. Participants choose two courses per day, where they learn from those experts in classrooms and in the field, but also by taking part in the activities themselves. They shoot, cook and even help clean game. 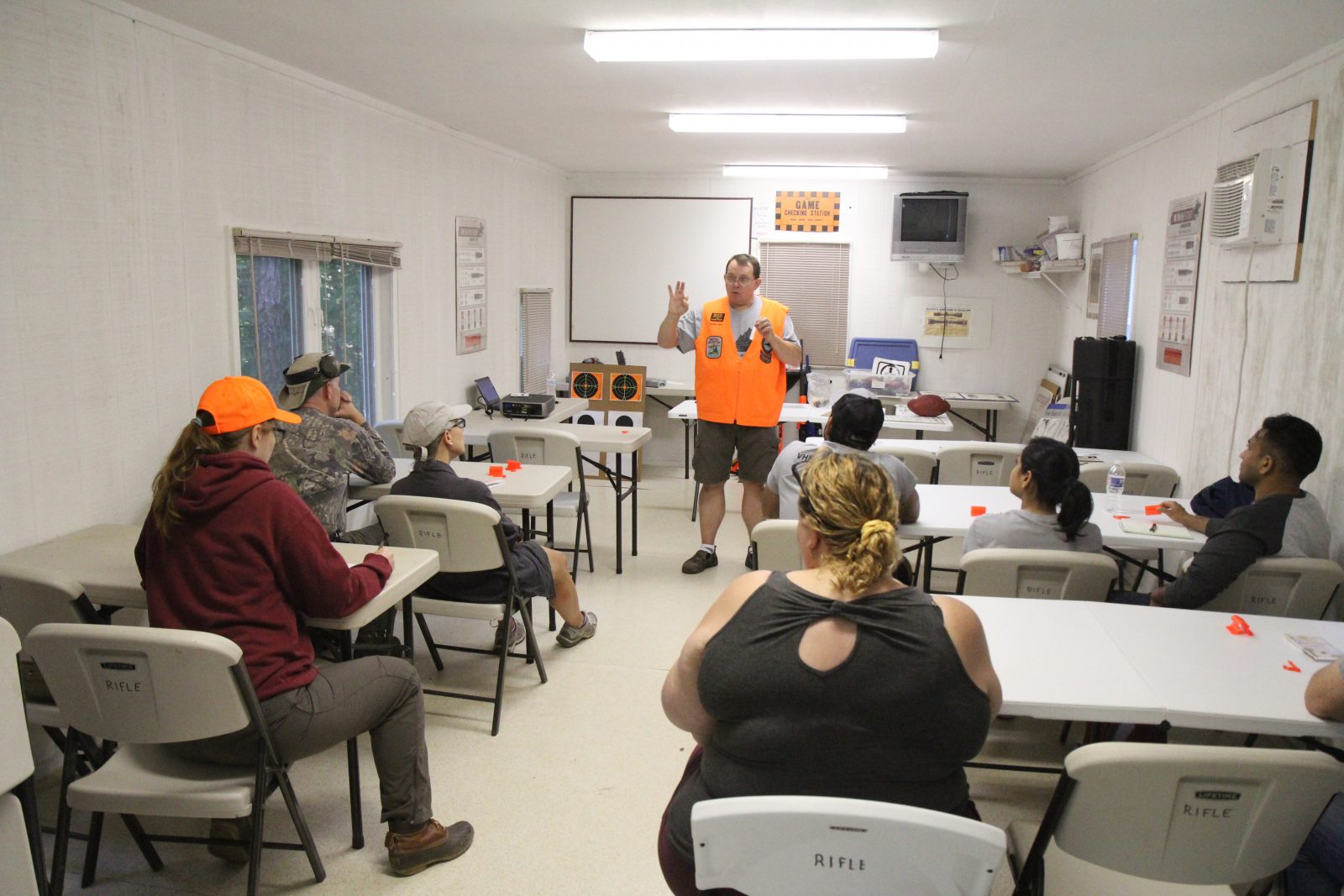 Hunter Skills Weekend participants learn both in the classroom and in the field.

“You don’t even need a gun, a bow or any other equipment. We have lots of loaner equipment available,” says Hyde, who helped teach the cooking seminar.

The event is held at the Holiday Lake 4-H Center near Appomattox and takes place over an entire weekend. Participants stay in bunk houses and eat communal meals at the center’s dining hall where they have a chance to meet people in the exact same situation.

“Getting started in hunting can be a bit intimidating, so I think it helps when participants know that they aren’t alone,” adds Hyde.

Jim Rzonca agrees. He hunted and fished when he was growing up in New England, but a career in the military took him away from the woods for much of his adult life. Now 54, he wants to rediscover his love of the outdoors.

“I just wanted to go back to the basics and also learn some new skills. I’ve shot guns all my life, but I never shot skeet. I took the skeet class and learned a lot,” says the law enforcement officer from Culpeper. 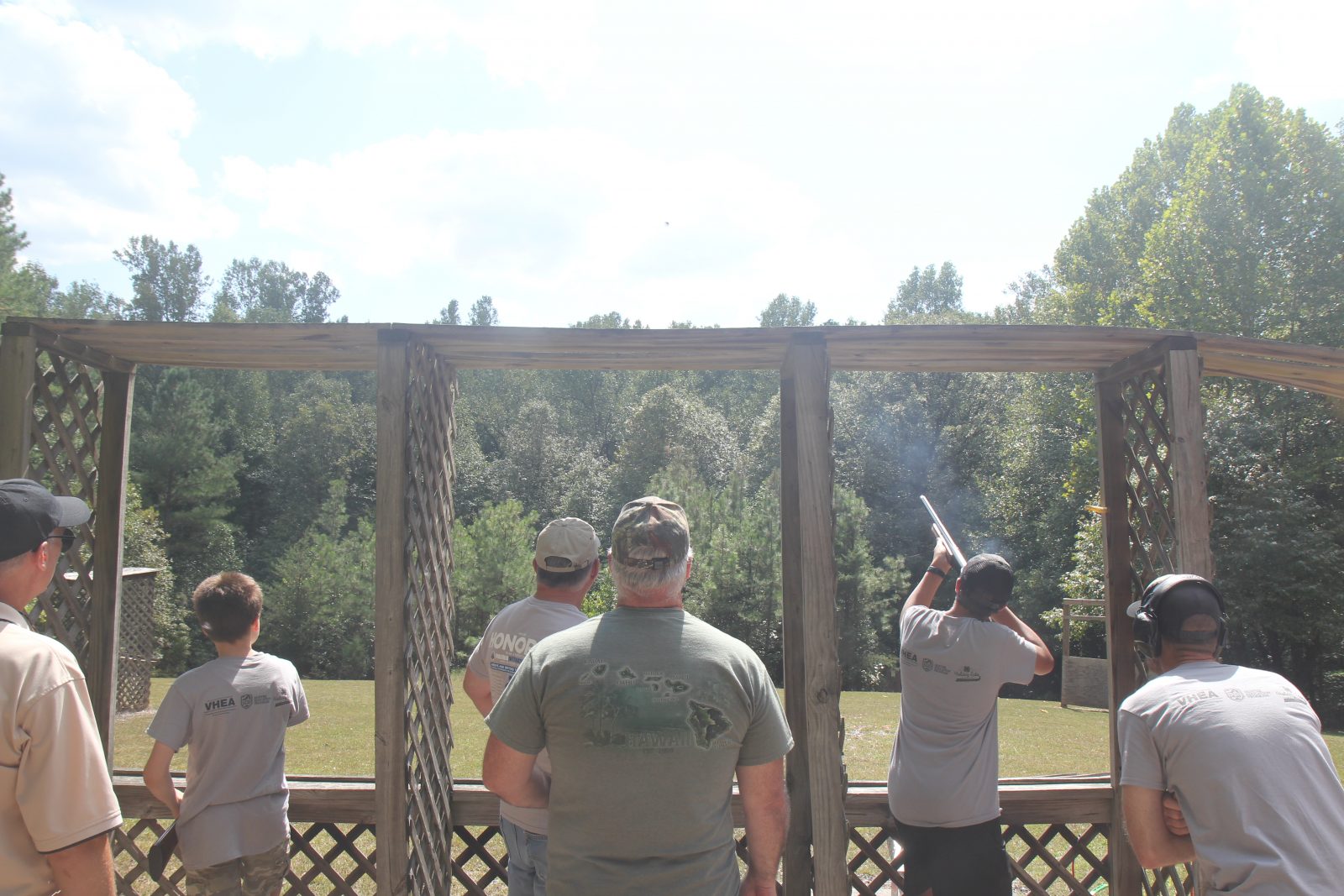 Rzonca has since become a regular shooter at a local skeet range. He also plans to spend more time in the woods with a gun in his hand and he hopes to take his daughter with him. It wasn’t just the classes that left an indelible mark, though.

“I met a lot of really great people from all over the state and from all walks of life. There were some really great stories,” says Rzonca. “We were all different but we all there for the same thing, which was really pretty cool.” 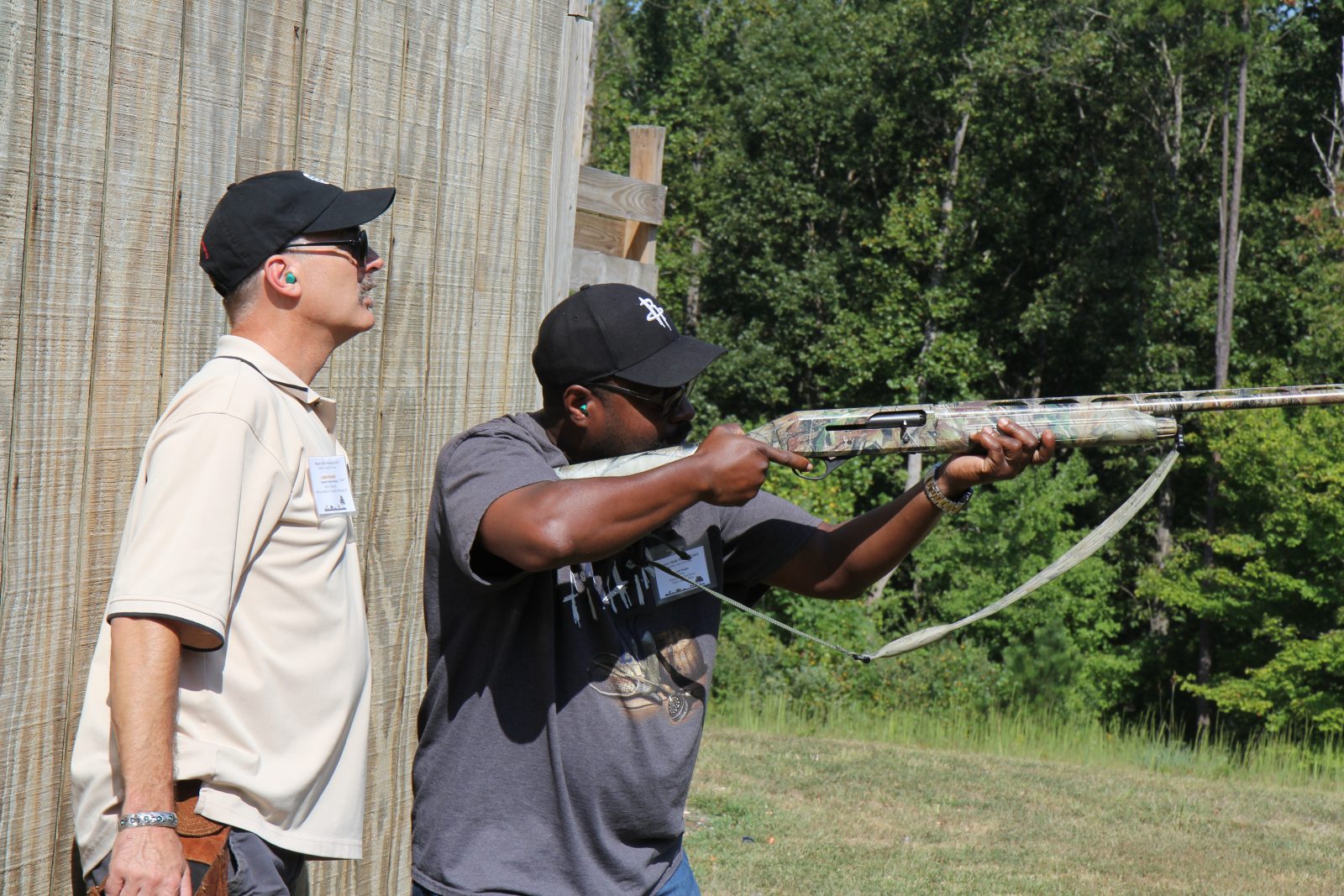 Instructors are hands-on in helping participants build their skills.

Participants must be at least 11 and anyone under 18 must be accompanied by an adult. Other than that, there are no restrictions on who can attend. Hyde says fathers and sons are frequent attendees, but mother-daughter combinations are becoming more common, as well. Friends often come together, but some people even attend by themselves. They all have a common goal: to learn how to hunt and shoot.

Some, like Dr. Cheryl Simpson-Freeman, mostly wanted to learn how to shoot a shotgun. She also took the skeet class. It is unlikely the Appomattox veterinarian will become a hunter, she acknowledges, but, “I like the idea of knowing how to shoot in case I ever needed to hunt.”

Aside from shotgunning, Rzonca wanted to brush up on hunting safety, deer butchering and the regulations that govern hunting. Raj, her husband, and Tarigoppula wanted to learn how to hunt and shoot bows. All three actually bought bows the day before the workshop, but the archery class was already full when they signed up. 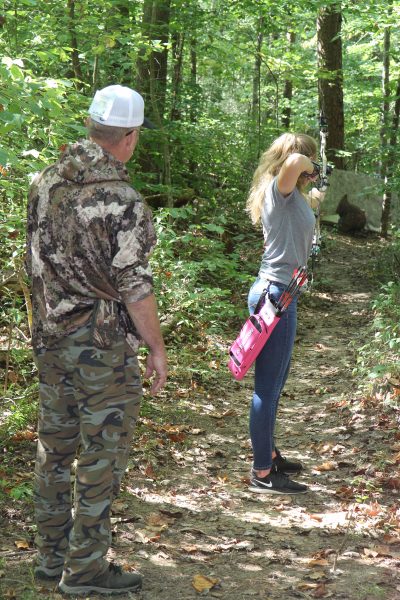 Archery is one of the most popular options at Hunter Skills Weekend.

They still got a hands-on lesson, thanks to instructor Mike Norkus. He’s been one of the archery instructors from the workshop’s very first event. A life-long bow hunter who retired from the military and civil service, the 66-year-old Colonial Heights resident volunteers because he loves helping beginners become better archers. As Raj learned, they don’t necessarily have to be in the class.

“Mike took us to the range after dinner and helped us set our bows up. Then he showed us how to shoot them,” she says. “He didn’t have to do that, but he wanted to help us. You can tell he really likes doing this.” 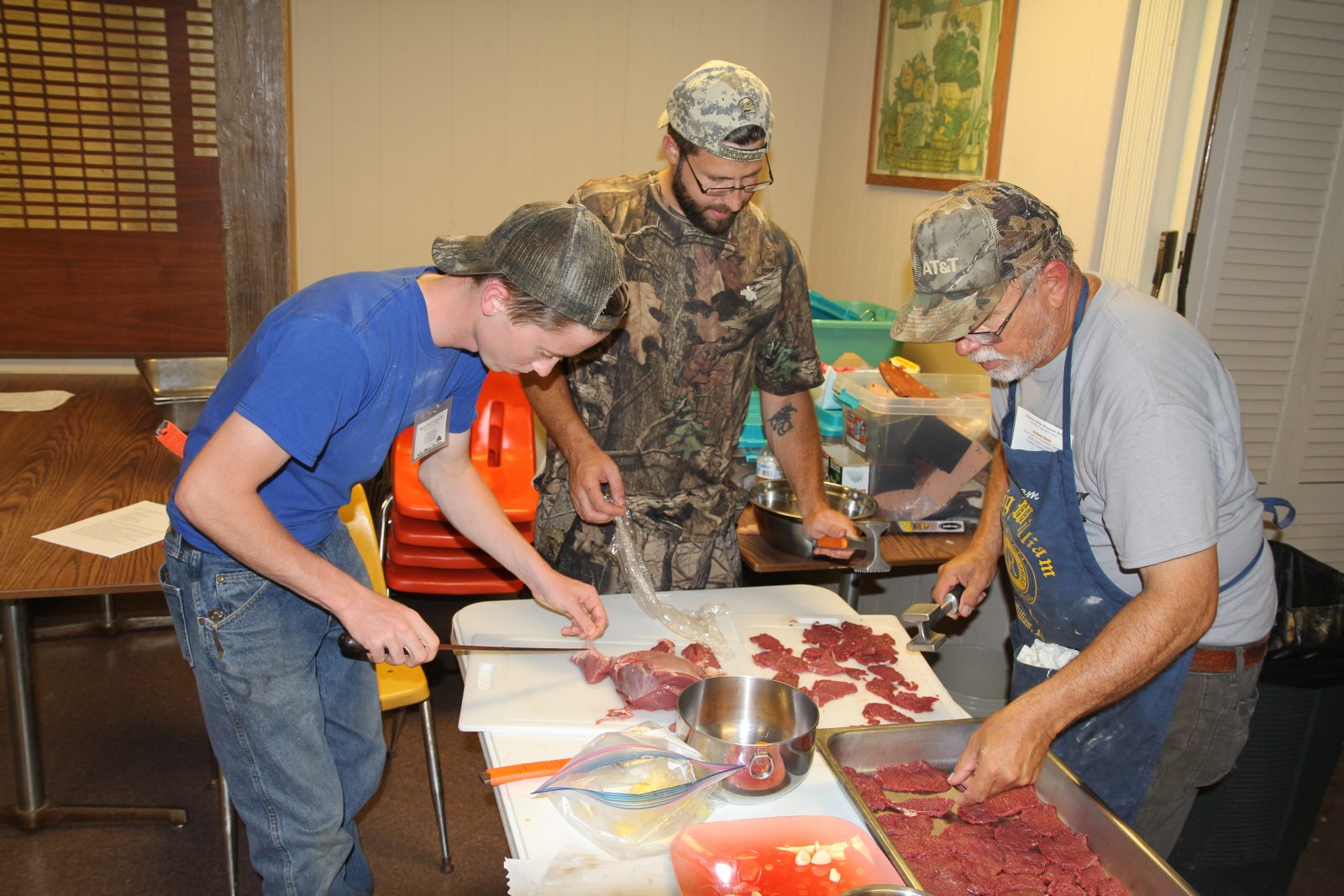 Along with the archery class, a handful of other seminars are staples in the weekend-long event, but new courses are added to keep things fresh, says Hyde. This year’s sessions included such things as waterfowl hunting, game recovery, wild game cooking, shotgunning, and even bow fishing.

Live-fire seminars—skeet, archery and muzzleloaders, for example—tend to draw the most interest and are offered every year. So are basic deer hunting classes. Raj loved every class she took.

“It was a great experience,” she says. “I learned so many new things and I felt totally at ease the whole time. I would definitely recommend it to anyone who wants to learn how to hunt and shoot.”