The Magical Moment That Became a Virginia Wildlife Cover Photo 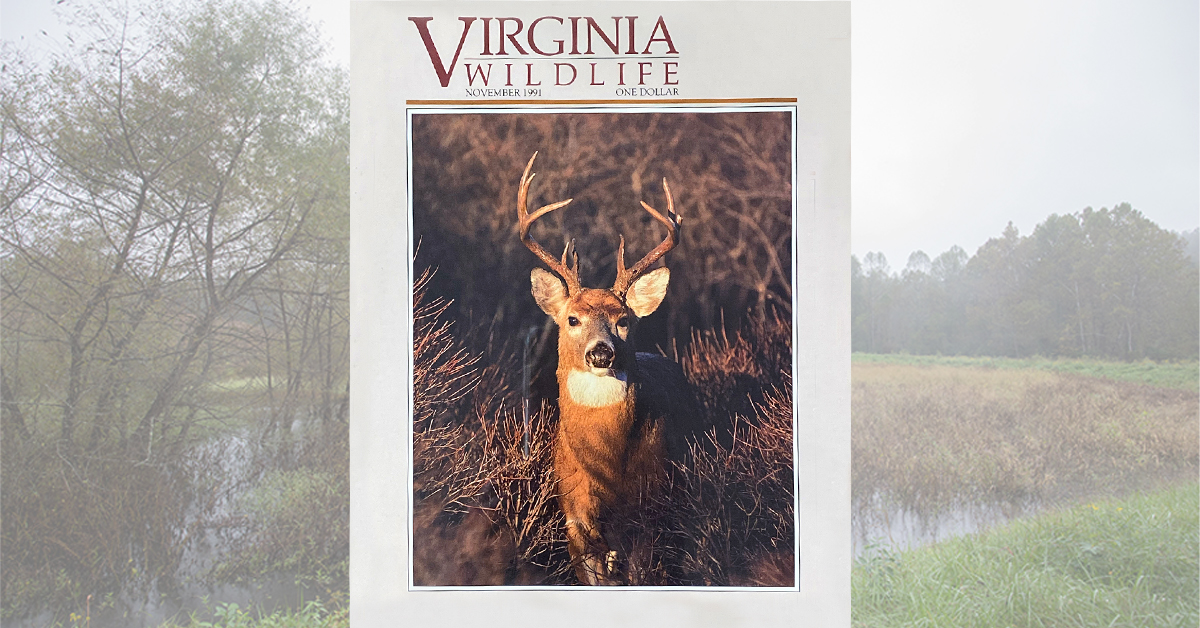 The moment this buck looked at photographer Lynda Richardson, she snapped the photo that became a Virginia Wildlife cover.

As a kid, I loved poking around the woods and creeks surrounding my family home. Sometimes I took a little point-and-shoot camera. As I got older and could afford a 35mm SLR camera, I became serious about combining my love for the natural world and photography and started on an incredible journey to become a professional wildlife photographer.

Over my 30+-year career, I shot thousands upon thousands of photographs (slides—now digital) of wild creatures from all over the world. Most of my assignments involved some form of risk, whether it was walking through dangerous markets to photograph illegal wildlife pet trade, climbing jagged, limestone cliffs without safety gear to photograph the world’s smallest bat, or accidentally positioning too close to a fresh lion kill as hyenas tried to steal the prey. I’m sure you can guess why my mantra quickly became, “Well, if I survive this, I’m sure I’ll have a great story to tell!”

Speaking of stories, whenever I go back and look through my photographs most of them bring back rich memories. Sometimes I can even smell or hear something as I re-live the experience. So, I thought it might be fun to pick a photograph for you, the reader, and share some of the memories behind it. Today, June 15, is National Nature Photography Day, a day created by the North American Nature Photography Association (NANPA) to promote the enjoyment of nature photography, and to explain how images are used to advance the cause of conservation and protect plants, wildlife, and landscapes both locally and globally.

I decided to pick a photograph that was published on the cover of the November 1991 issue of Virginia Wildlife magazine, a white-tailed buck. 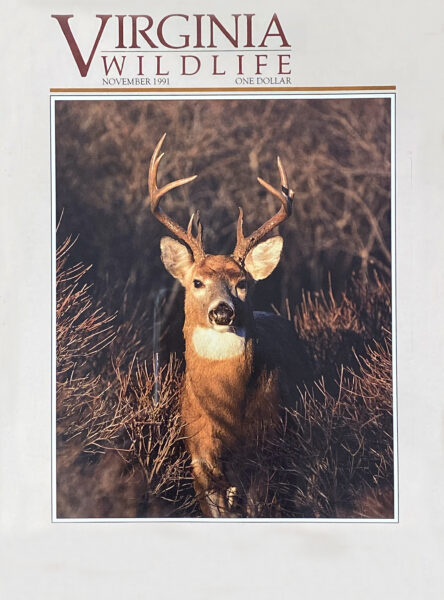 It was really cold with a light wind that day in Shenandoah National Park. The white-tailed bucks were in rut and I was looking for one in particular. I had spotted him the evening before on the edge of the big meadow. As the sun began to slowly rise above the trees I spotted him again, this time in the middle of the meadow. It looked like he might have company.

I watched through binoculars as he walked purposefully through red willows, head held high. He would lower his head and then bring it up again and move forward. I licked my finger and held it up to test the wind direction. It was blowing out of the north, so I slowly began to walk through the bent brown grass towards the south, angling my way downwind of my quarry. I made sure not to stare in his direction, only making sideward glances as I walked a wide circle trying to get close.

Walking through a grassy field with a heavy tripod and 500mm telephoto lens is not easy. The legs of the tripod kept snagging on blackberry stems and other vine-like plants tugging the tripod harder against my shoulder. Frustrating! Wildlife photography is definitely a physical workout, and I now have bad shoulders to prove it!

As I worked my way closer, I stopped to watch with my binoculars to see what was going on. I wasn’t surprised when a doe stood up in the red willows trying to avoid the persistent buck.

As I began to move into the perfect position, I could now hear the buck making a weird noise. It was a gravelly, drawn out, monotone kind of sound. Continuing to keep my eyes on the buck, I slowly lowered the tripod into position and locked my lens into place. And just as I lifted my hand to the shutter, and I swear I am not making this up, the doe took off with the buck in hot pursuit.

Dropping my head, I felt a little defeated. After an hour of stalking, within two seconds of hitting the shutter, my subject had flown the coop and there was no way I could catch him. Trying to make something out of nothing, I decided to look around where I was standing as I decided what to do next.

I then remembered that sound the buck was making and decided to try it myself since nothing else was going on. For a few minutes, I practiced. AWWWWWWWW, awwwwwwwwwwwww, awwwwwwwwww. It was kind of fun trying to re-create the buck’s call. I started to concentrate on the nuances of the gravely drawl when suddenly a little wren started fussing from my right side. I looked over at the bird wondering what was wrong when another movement to the left startled me.

When I turned, standing right in front of me, maybe 15 feet away, was the big buck I had been pursuing. I was so shocked I didn’t know what to do, but I glanced through the camera and realized I was way too close to get a shot. As I quickly and cautiously tried to back away, blackberry branches tugged at my tripod legs, making me panic. It felt like an hour before I was able to get set up far enough away to get the handsome buck in focus, thinking that at any minute I would look back and he would be gone.

Finally, I was in a great position to start shooting. Though as I shot frame after frame, I noticed the buck wasn’t even looking at me. His eyes stared past me as if he was searching for something.  And that’s when it dawned on me. That buck heard my calls and thought I was another buck and he had come to kick my butt!

Eventually the old boy must have gotten tired of looking for his competitor (ha,ha,ha, me) and he browsed his way back into the direction he had chased the doe. Hopefully, he would locate her again. But for me, in the beginning of my wildlife career, it was a magical moment I will never forget. And I survived it with a story to tell!

Lynda Richardson, the art director of DGIF’s Virginia Wildlife magazine, has more than 30 years of experience as a wildlife photographer. She’s traveled to Africa, Central and South America, Cuba, and throughout the United States on assignment and her work has been featured by national and international wildlife magazines and organizations such as The Nature Conservancy, and the National Geographic Society.