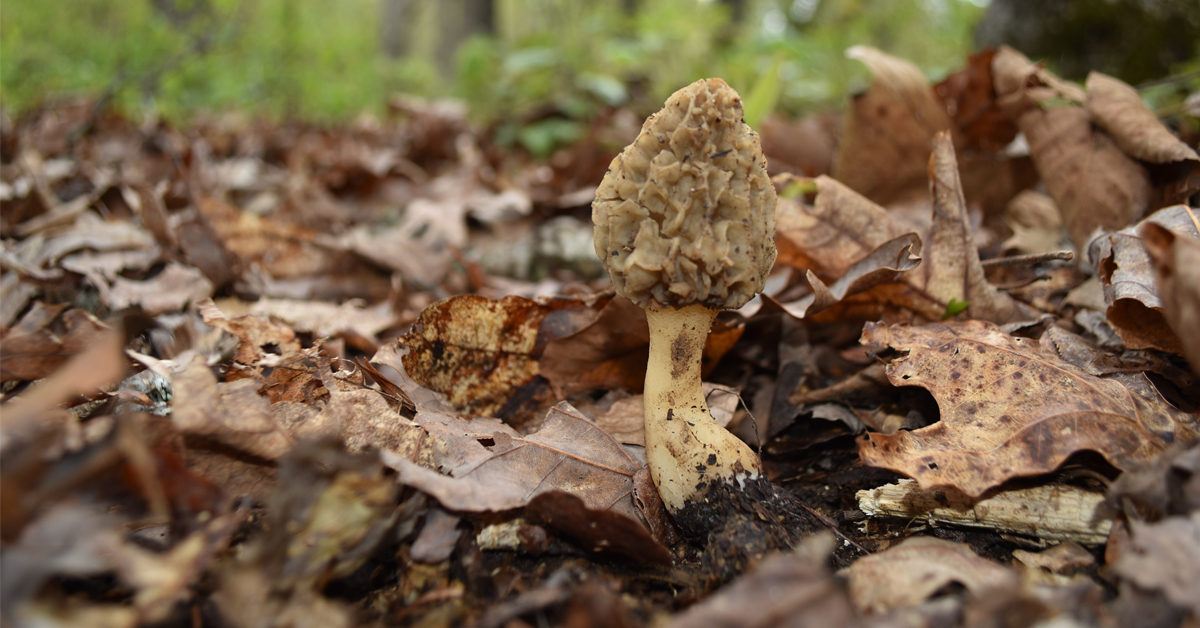 Yellow morel growing in the forest duff of a mixed hardwood grove.

Only one thing will make me pause when I’m pursuing Virginia’s spring gobblers – morels. Our state hosts three species: the black, yellow, and the tiny tulip species, all of which feature conical, honeycombed caps, hollow stems, and heights from three to six inches. Jeff Huffman is a fungi fancier from Roanoke and spends much of the spring searching for Morchella members.

“In Virginia, I’ve found morels as early as March 20 and as late as mid-May,” he said. “In Western Virginia, prime gathering time usually lasts about three weeks from mid-April to the first week of May. Generally, you can back up those times two weeks in Tidewater and one week in the Piedmont.

“Some of my best morel spots are in tulip poplar groves, but you can also find them around dead or dying elm and ash trees,” Huffman continued. “Sycamore groves and even white pine stands will sometimes have them. Like so many mushrooms, they are often ‘where you find them’ and some of the spots will make no sense whatsoever.”

Huffman adds that mild, wet winters are often a harbinger of a classic morel season to come. These fungi will start emerging when the soil temperature reaches 54 degrees for three days or so, he says, and if the location, moisture, and air temperature levels are sufficient. However, morels, like many fungi, are fickle.

“Everything could be building for a great morel season, but then we have some downpours and the morel’s mycelium base, in effect, drowns,” he said. “Or we get a long dry spell, and the morels never develop. Some years, people find many pounds of them… other years you might find only two or three individuals.”

Huffman says that every year he begins his search on the south and southeast sides of mountains and hills, which warm up faster. He starts at the bottom of these slopes and gradually meanders upward as the spring progresses. By May, he is on the northerly sides of these slopes as they offer a better chance for late growing morels to emerge. Again, start low and move upward as the days pass.

My wife Elaine and I relish morels in any kind of egg dish (think quiches and frittatas), as toppings (or cooked inside) for deer and wild turkey burgers, and as side dishes or in salads. However, as is true with just about every edible wild mushroom, plenty of caveats exist. The first time folks search for any mushrooms they are unfamiliar with, they should go with an expert who can identify them. With many edible fungi, dangerous lookalikes exist; for morels it is the false morel family.

Furthermore, even choice edible mushrooms can cause stomach distress for some people, especially if alcohol has been consumed. All morels, like most edible fungi, should be cooked before consumption. Finally, it’s also wise to eat small amounts of a species the first time it’s consumed.

The Old Dominion’s Wildlife Management Areas can be excellent destinations for mushroom gatherers. But be sure to have either a Virginia hunting, freshwater fishing, or trapping license, or a state boat registration. You can also purchase an Access Permit for WMAs. For more information: https://gooutdoorsvirginia.com/. Two great books for mushroom identification are Appalachian Mushrooms and the National Audubon Society Field Guide to Mushrooms.

Bruce and Elaine Ingram have co-written a book (with recipes) on hunting and fishing for food and gathering wild foods. For more information: bruceingramoutdoors@gmail.com.