Plop Down a Terrestrial Imitation for Summer Trout 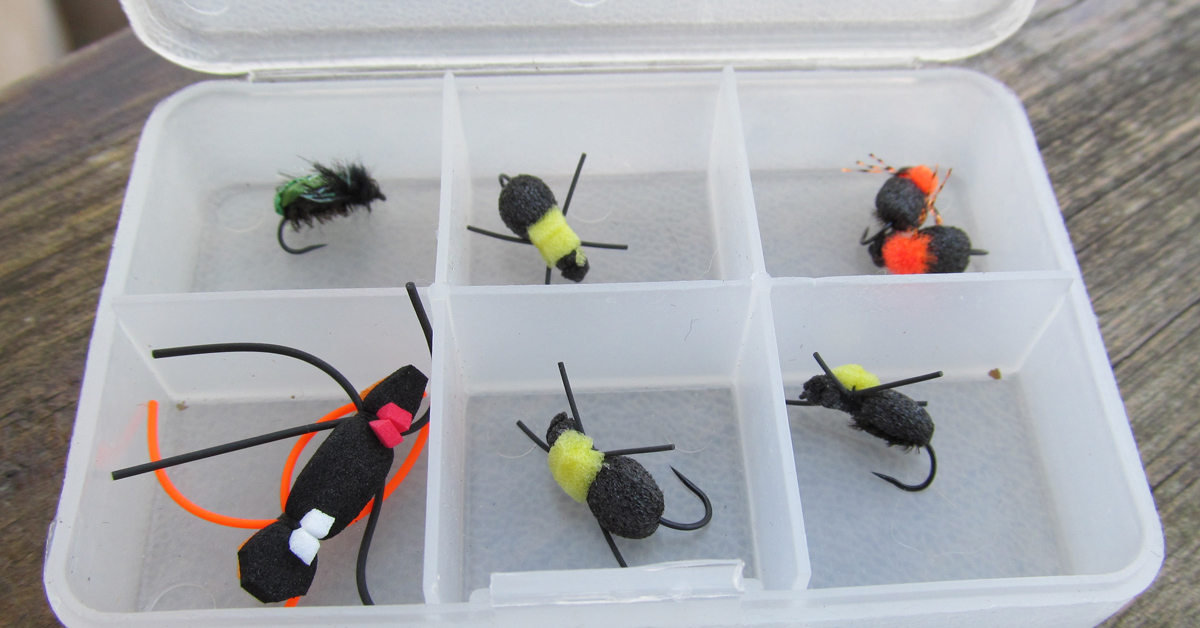 Most trout fly fishermen are aware of the importance of aquatic insects in their quarry’s diet. These include mayflies, stoneflies, caddis and similar species. But while these water-born insects get most of the attention, in modern times terrestrial insects—those living on land—are often more important than aquatic insects in the diet of trout.

These “bugs” jump, fall, get blown in by wind, or washed in by rain and are eagerly gobbled up by waiting brook, brown, and rainbow trout. Both hatchery trout and the native brookies of Shenandoah National Park love them.

Some of the most important ones we can imitate with our flies include beetles, leafhoppers, treehoppers, cicadas, crickets, and ants. One of the most common of all is the grasshopper. This insect can provide terrific fishing from spring through the first frosts of fall.

The great thing about terrestrial fishing is that land insects are constantly dribbling into the water, so trout feed on them any time of day, unlike a mayfly hatch that may stir feeding for one or two hours and then be done. With land insects you can get to the stream whenever you like and expect steady fishing.

Once a cricket, ant, or hopper falls into the water, it’s held firmly in the stream by the surface tension between air and water. Few are able to escape. Trout sense that these insects are helpless and also know they represent an important source of nourishment high in protein.

More than one million species of land insects have been identified, outnumbering aquatic insects by 20 to 1. Don’t worry, though. You only need a few proven imitations of land insects in your fly boxes to be successful terrestrial fishing. Three of the top ones to stock are grasshoppers, ants, and beetles. Add crickets, leafhoppers and inchworms if you want to expand the list.

Casting imitations of hoppers is particularly exciting because it often draws strikes from some of the biggest trout in a stream. But even small and average-sized trout will gobble them up. I once kept a trout about a foot long and found it had nearly a dozen hoppers in its stomach!

Grasshoppers start appearing along stream borders in April and May. It’s during summer and fall, though, that they reach peak numbers and trout key in on them for frenzied feeding binges. As you would expect, the best place to fish with these flies is around grassy meadow areas. 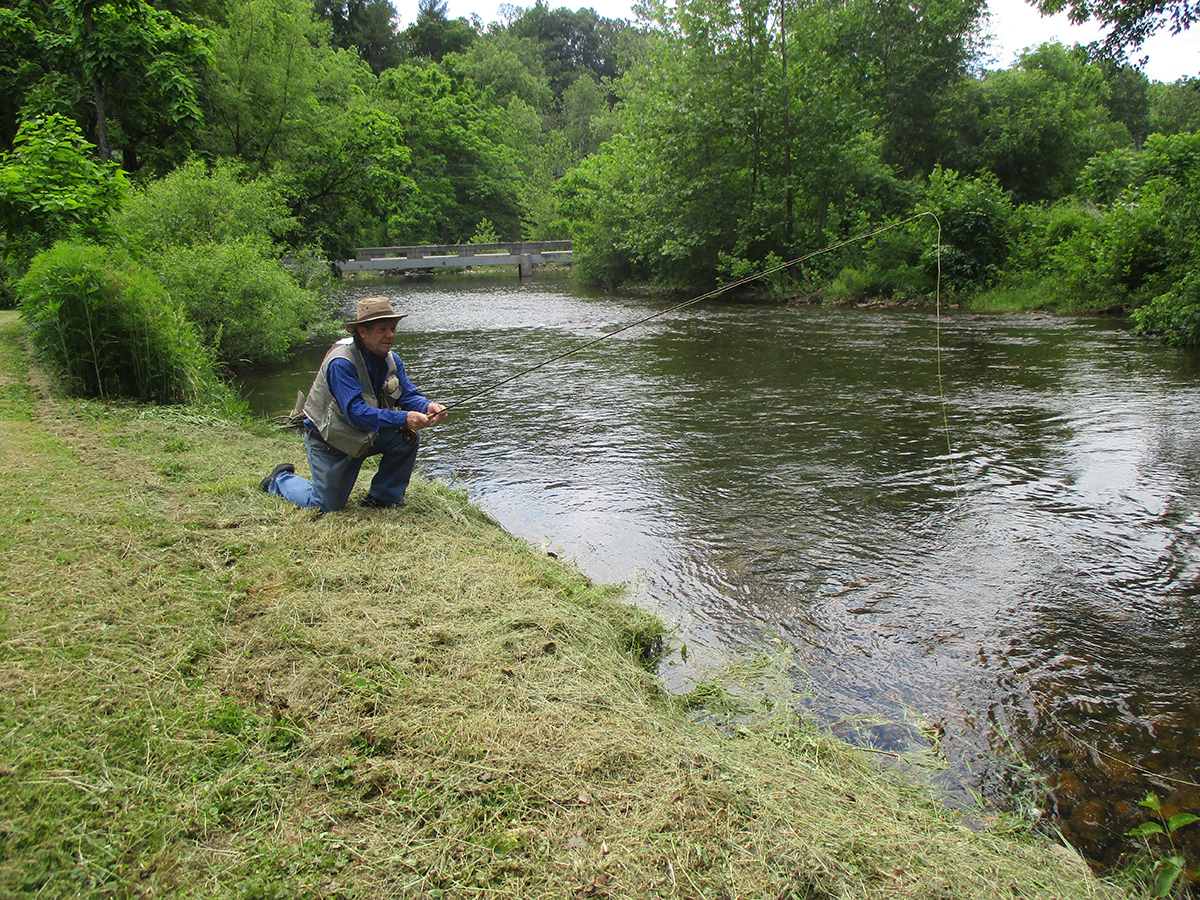 If you want to enjoy the fastest action, try to catch a few of the naturals along the stream or river’s edge. Examine their predominant colors and sizes and then select a pattern from your fly boxes that most closely duplicates the naturals. A precise match isn’t required. Just get one as close as possible. I’ve used sizes from 4 down to tiny size 18 hooks.

Fishing with grasshoppers is most productive from mid-morning until late afternoon. That’s when the insects are most active and most likely to fall or get blown into a stream. Top weather conditions for hoppers are hot and dry with wind also being a plus, since it might blow them into the water more frequently.

On rainy, cool days, opt for other land insect imitations than grasshoppers. Good terrestrials to turn to in that situation include ants, beetles, and caterpillar imitations, often called “inchworms.”

Larger terrestrials such as beetles and grasshoppers make a distinct “splat” when they enter a river. Trout learn to key in on this sound in their feeding by racing to any such sound. By dropping your fly with a “plop,” you can duplicate this noise and draw strikes.

The best way to do this is to simply overpower your forward cast slightly to smack the fly onto the water. Another good delivery is the sidearm skip cast, which skitters the fly over the water and allows you to bounce the hopper back under shoreline brush, where big fish often lurk.

Large land insects such as crickets and grasshoppers often struggle in the surface film. Imitating this commotion with a gentle twitch can draw strikes from reluctant fish. Don’t make the movement too violent. Just twitch the rod tip gently to make the fly quiver and inch forward slightly.

Some of the heaviest trout often hang out within inches of the stream banks when terrestrial insects are active, waiting for them to tumble in. Dropping your fly very close to the river’s edge is a good tactic in this case, since that’s where the fish are accustomed to seeing the insects come from. The shore where the wind is coming from is often best. But don’t ignore mid-stream locations, either.

Ants are fed on by trout in all parts of Virginia’s streams and rivers, from pocket water to shoreline eddies to mid-stream pools. The main distinctive feature that must be kept in mind in any ant pattern is the thin waist between the abdomen and head of the insects. This seems to be a key trout home in on. You can use cork, rabbit fur, foam, or many other materials to make ant patterns. One famous version is the oversized Chernobyl Ant, made of foam with rubber black legs. 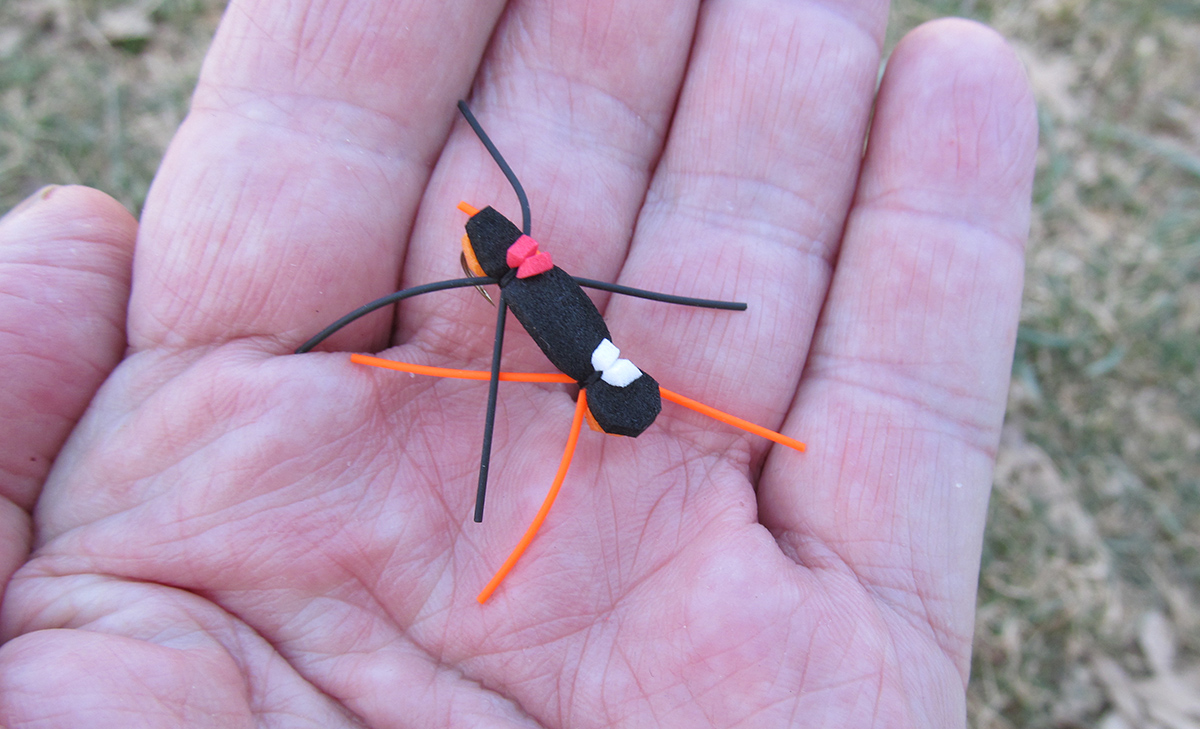 Ants can be presented to trout you see or blind cast to likely areas. They score in mid-stream but are particularly effective along shore under overhanging shrubs and tree limbs. Flights of swarming mating ants often appear in fall and can produce fabulous fishing action. Top colors are cinnamon (rust-colored) or black, with sizes 12-18 effective.

Beetles belong to the Coleoptera order. This is the single most abundant order in the animal kingdom, with over a third of a million different species.

I once examined the stomach of a brown trout and found seven different types of beetles in its stomach!

Due to their secretive lifestyles, you won’t see many beetles. But they are there, in all kinds of habitats along streams—and trout love them.

A wide variety of beetle flies are available from mail order companies, but you can also easily tie your own. Most of the patterns are very simple to construct. Black is the best color.

Cork, foam, or spun and clipped deer hair can be used. A very simple but effective tie is the Crowe Beetle. Foam offerings are equally effective and more durable. You can fish a beetle in the traditional approach with a dead drift over the trout’s lie or suspected position in the stream.

It’s often more effective, though, to use a method I call the “sound cast.” Plop the beetle fly onto the water with a tiny splat. Fish seem to key on this “kerplunk” sound of the naturals entering the stream and race over to suck in the bite of protein. It’s often best to drop the fly to the side and slightly behind the fish, catching them by surprise and drawing an instinctive take. This is exciting fishing, and beetle patterns can be productive all day long, from spring through fall, like all terrestrials.

Why wait for a mayfly hatch that might last an hour or two? With land insects, you can enjoy a full day’s fishing and often fool some of the biggest trout in a stream. Best of all, it’s all surface fishing.

Terrestrial Tackle: These flies are sometimes bulky, so I like a rod with some backbone. A good choice is an 8 ½- to 9 ½-foot 5-6 weight rod with a weight-forward floating line. A 9- to 12-foot leader tapering to a 4-6X tippet completes the setup.

Beetles, crickets, inchworms, and grasshoppers are large enough that they can produce excellent catches of bass. Fish them on ponds for largemouths and on streams and rivers for smallmouths in sizes 4-8. Hand-sized bluegills will also nail terrestrial imitations such as ants and beetles on ponds and lakes. Use hook sizes 10-14 so these diminutive panfish can get the imitations in their small mouths, allowing a solid hookup.