At the turn of the last century, the wildlife and forest resources in much of the country were decimated following more than a century of habitat destruction and unregulated market hunting. Natural resources seemed limitless in the early years of our large nation, a notion later disproved during the late 19th century. Sportsmen were the first to sound the call to action, with a conservation movement that created state wildlife management agencies, funded through a combination of hunting license sales and excise taxes on equipment such as firearms and ammunition. This movement also motivated the creation of public lands that many of us currently use in various outdoor pursuits. This successful model of conservation we enjoy today has become known as the North American Model of Wildlife Management and Virginia exemplifies this model. 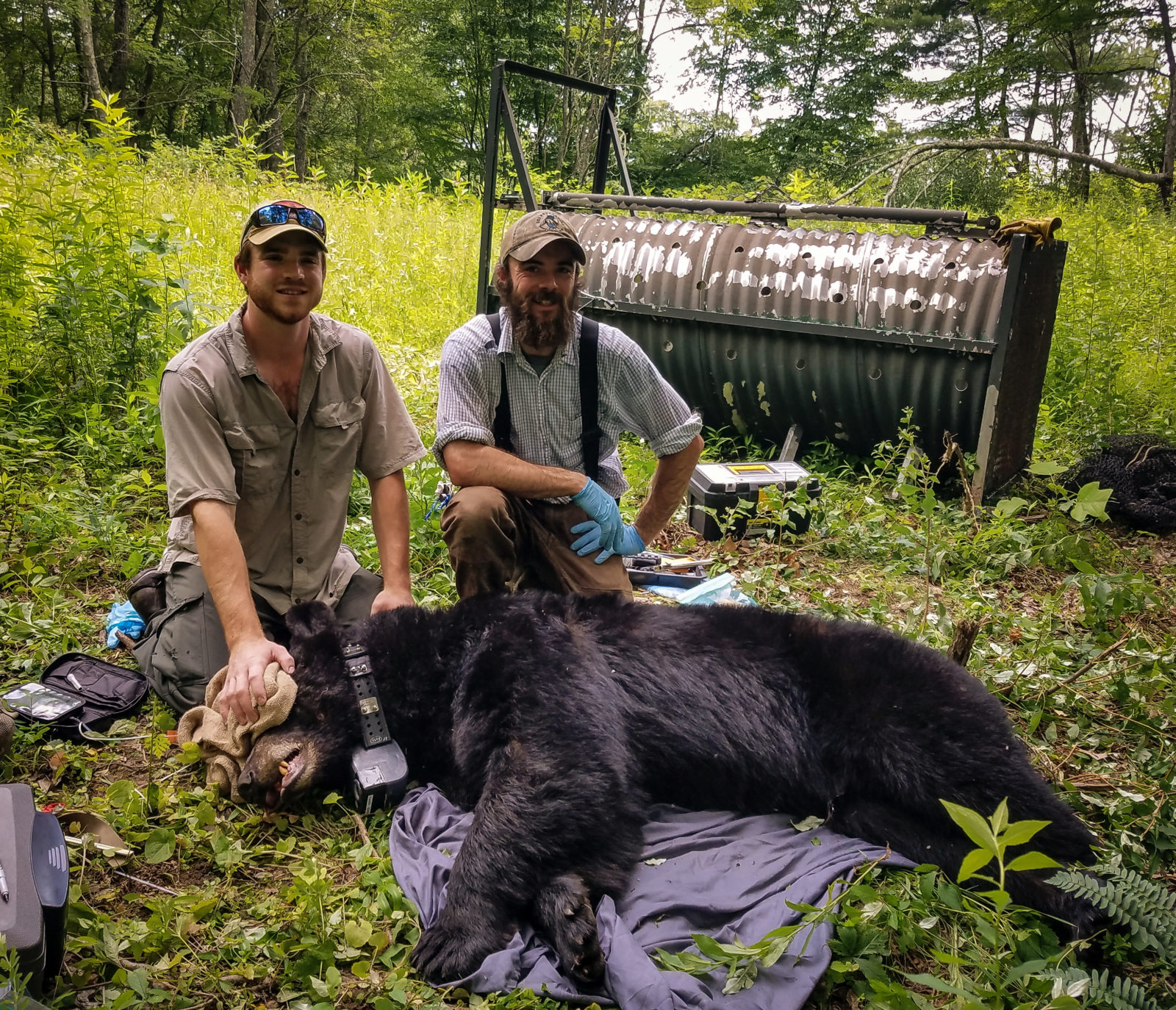 Virginia Tech graduate students David Mcnitt and Robert Alonso are conducting the Carnivore study in Virginia’s Bath and Rockingham Counties. The bear trap pictured here is an important part of this project. The trapping phase and radio collaring of black bears, coyotes and bobcats is well underway. Bear GPS collars are expected to provide data through December 2019. The GPS collars have been attached to 22 bears, 17 coyotes and 21 bobcats.

There was a time when even whitetailed deer, ducks, and wild turkey were at perilously low numbers in the state. Today, Virginia contains robust populations of many wildlife species. Some carnivore species have recently joined the ranks of recovered wildlife in Virginia. Managers and researchers are now facing the complexity of understanding and managing these carnivores and their role in ecosystems, particularly in the large expanses of public lands in western Virginia. To add to the complexity, a newcomer is on the landscape, the coyote. These complexities, and our need to understand them, led to the creation of the initial Virginia Appalachian Coyote Study (VACS) in 2011, and the current follow-up study, the Virginia Appalachian Carnivore Study (VACS II).

Black bears and bobcats, two of Virginia’s native carnivores took a long time to recover. Harvest records indicate that only in recent decades have these species’ populations climbed to their current levels. Also, in recent decades, coyotes extended into Virginia as part of the species’ eastward range expansion. Carnivores play a significant role in ecosystems; therefore, it is essential that we gain local information on these species and their interactions with other species, namely prey species. A decrease in deer harvest on public lands in counties west of the Blue Ridge Mountains, coinciding with the apparent increase of predator populations, and a decrease in suitable deer habitat, presents a fitting location to investigate the role of carnivores in the area. 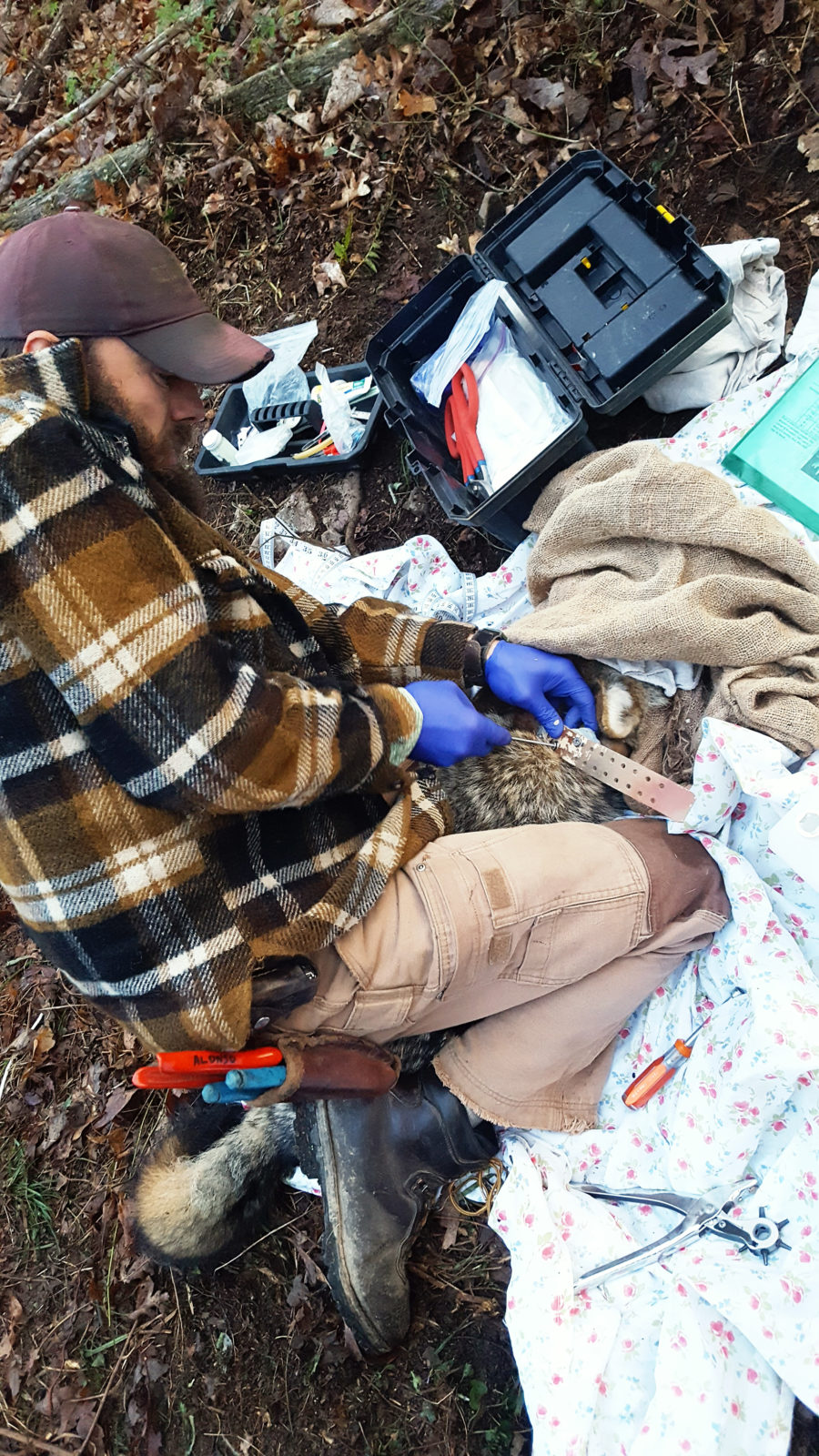 Robert Alonso attaches a GPS collar to one of the 17 coyotes that have been trapped. The coyote collars will collect data until around April 2019.

The Virginia Department of Game and Inland Fisheries (DGIF) initiated VACS prompted by support from local deer hunters in western Virginia and the Virginia Deer Hunters Association. VDGIF granted funding to Dr. Marcella Kelly, professor in Virginia Tech’s Fish and Wildlife Conservation Department, to enlist two graduate students to study population status, diet, and spatial ecology of coyotes in western Virginia. The study was based in Bath and Rockingham Counties. Findings from that study revealed that whitetailed deer occurred in 74% of coyote scats but were also found in 35% and 43% of bobcat and bear scats, respectively.

The diet findings from the initial coyote study prompted further research questions regarding all three of the carnivore species. Coyotes, bobcats, and black bears have all been documented as both scavengers and predators of whitetailed deer throughout their geographic ranges to varying degrees. The initial diet findings showed us that all three species feed on deer, but do not resolve how much of the consumption is scavenging versus direct predation. Those findings also do not indicate how many deer are consumed, as one deer carcass can contribute to the contents of many carnivore scats. In a multi-carnivore landscape, it is not only important to understand the roles of each species individually, it is also important to understand these species as a carnivore community to understand any potential impacts on whitetailed deer. The initial coyote study also highlighted the fact that both black bears and coyotes have been previously studied in western Virginia, but very little information regarding bobcats exists for the entire Central Appalachian region.

The VACS II project was created in response to these questions. In 2016 VDGIF granted funding to conduct research on coyotes and bobcats. Additional funding was provided by VDHA, the Safari Club International Foundation, and private donors to include bears in the research project. PhD student Robert Alonso and Masters student Dave McNitt were brought on to conduct the research, which is focused in Bath County. The primary goal of VACS II is to better understand the role of coyotes, bobcats, and black bears as whitetailed deer predators and scavengers in Central Appalachia. We also aim to increase basic knowledge of all three species, particularly bobcats, for which local ecology is poorly understood. We are using multiple research techniques to answer our questions, many of which rely on the latest technology.

Our principal technique is the use of GPS collars. We have spent much of the past two years capturing and collaring coyotes, bobcats, and black bears in western Bath County. Over the course of the project, we have collared a total of 17 coyotes (9 males, 8 females), 21 bobcats (14 males, 7 females), and 22 bears (14 males, 8 females). Currently in the field, we have 10 functioning GPS collars on coyotes, 8 functioning collars on bobcats and 13 functioning collars on bears. Coyote collars will finish collecting data around April, 2019. The bobcat collars will last roughly until October of this year, and bear collars will last up through December of 2019. The GPS collars we are using communicate data to us via satellites on a regular basis. Receiving the data in almost real time allows us to track the animals on the ground and search for potential kill or scavenging sites. 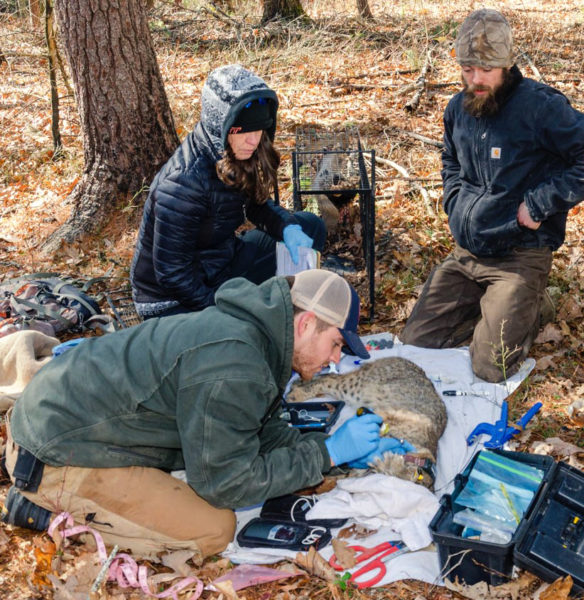 David Mcnitt collars one of the 21 bobcats that is part of the study while Robert Alonso and Dr. Marcella Kelly watch. Data collection from the bobcats will last roughly through October of 2018.

The GPS collars are also fitted with accelerometers, which collect fine scale activity data. These accelerometers collect such fine scale data that we can detect whether an animal is walking, running, feeding, or bedded down. We aim to use this activity data, linked with the GPS collar data, to help tease apart which clusters of GPS points represent resting sites, scavenging sites, or direct predation events. In addition, 10 of the bear collars also contain video cameras, cutting-edge technology which will provide rare footage from the bear’s perspective, hopefully capturing footage of predation or scavenging behavior. Unlike the GPS collar data that is transmitted to us via satellite, we must physically retrieve the collars to get the activity data from accelerometer unit. While some collars have drop-off devices, we largely rely on cooperation of hunters to return collars from harvested animals.

We also monitor deer carcasses with remote cameras to understand scavenging hierarchy, interactions, and competition among the three predators at carcass sites. From 2017-2018 we established and monitored 36 scavenging sites with remote cameras in Bath County and in Giles County. Preliminary analysis on a portion of our scavenging sites has examined the amount of time it takes each carnivore species to discover a carcass, time spent feeding, and number of returns, for each carnivore species. Most carcasses were discovered by predators within five hours to a few days following establishment of the carcass site. Black bears discovered carcasses first in 50% of scavenging sites, followed by bobcats (37% of the time), then coyotes (13% of the time). When multiple species visited carcasses, coyotes were most frequently the second species to arrive and bears were most frequently the first and third species to arrive, while bobcats never visited after two other species had been there. Bears had the most overall returns to carcasses (29) after an initial visit. Coyotes spent the longest average amount of time feeding per carcass per night per site (2.75 minutes), while bobcats had the longest total time feeding across all carcass sites (748 minutes). Data entry is ongoing at Virginia Tech with the assistance of undergraduate volunteers. Carcass sites are continually being deployed and monitored to continue to collect scavenging data and document predator behavior and interactions.

The final technique we use in our research is genetic analysis of fecal DNA collected from large scale scat surveys across western Bath County, which we use to track deer consumption rates over the course of the study. During this project, we completed two periods of scat collection, hiking transects on trails and dirt roads that total over 100 miles in length. In June and July, 2016, we collected 1085 scat samples. Of those samples 669 contained enough DNA to identify predator species, with 310 bobcat scats, 245 bear scats, and 113 coyote scats. We are currently in the process of working with a wildlife genetics lab at the University of Idaho to identify how many of those scats contained DNA from deer. This winter/spring we completed our last round of predator scat transects during the months of March and April, 2018. In total, we collected 1128 samples which will be analyzed this fall and next spring to identify the predator species. Once predator species has been identified we will determine how many scats also contain deer DNA.

The end of summer 2018 marks the completion of the field work phase of the study. The following months will involve organizing data, running analyses, and presenting results. Genetic analyses are currently underway. Many hours of photos and videos from carcass sites are currently being processed with the help of undergraduate volunteers and independent study students at Virginia Tech. We will conduct statistical analysis, incorporating all the various types of data, throughout the next year and results will be published and presented as different components of the project are completed. We plan to continue to update VDHA as our research progresses. If you happen to legally harvest a collared bear, bobcat, or coyote this hunting or trapping season please contact us at vtvacs@gmail.com or at (540) 315-3913. We thank VDHA and its members for the continued and consistent support provided to these projects over the years. Stay tuned to Whitetail Times for project updates in the future.

Editor’s note: David Mcnitt and Robert Alonso are two of the eighteen college student recipients that the VDHA Lee Roy Gordon Scholarship Grant has been awarded to since the program was established in 1989. Scholarship grants and funds to purchase equipment needed for research projects has been an important part of this outreach program. The VDHA takes great pride in what we have fulfilled over the last 29 years, through research study. Our organization is proud of what our students have accomplished and look forward to continuing this support!