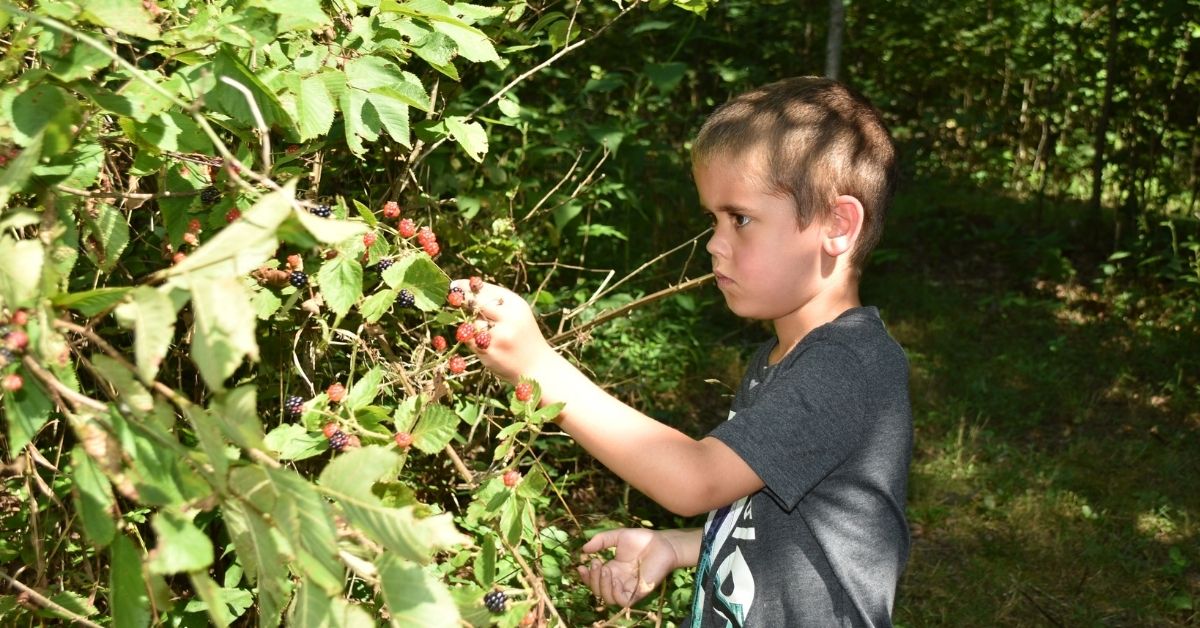 Virginia hosts an incredible number of wild edibles, and this is especially true in the summer months when six species of wild berries provide nourishment for wildlife and tasty treats for gatherers. The Rubus family (which includes raspberries, wineberries, blackberries, and dewberries) is particularly important for wildlife, believes Katie Martin, the Virginia Department of Wildlife Resources’ (DWR) deer, turkey, and bear biologist.

“The Rubus members provide summertime food to really everything from game animals like deer, turkeys, grouse, and bears as well as many species of mammals and songbirds,” she says. “The berry vines are great places for turkeys and songbirds to nest and find escape cover, and I’ve even witnessed a bear denning in a raspberry thicket.”

The Rubus quartet thrives throughout the Old Dominion. Martin says they are most likely to be found in edge habitat such as the borders of fields, woodlots, and roadways. The foursome also flourishes in full sunlight and are colonizing flora, often springing up after some sort of disturbance occurs such as fires or clear cuts.

The other two major summer berries are the red mulberry and blueberry. Found statewide (though infrequently common anywhere) mulberry trees appear in the understory, especially along streams and overgrown fencerows. The Northern highbush blueberry rounds out our sextet and appears statewide. I’ve found them on top of a Craig County mountain at over 3,000 feet elevation, but they also occur in Tidewater flatland swamps and bogs with their acidic soil.

Let’s take a closer look at these six fruits in order of ripening.

My favorite mulberry tree grows along a Botetourt County backroad. I discovered the tree when I noticed scores of purple splotches on the pavement. More conventional ways to identify Morus rubra include small, heart-shaped leaves that have a rough feel and rounded teeth around the edges. The berries are reddish purple to black and are delightfully sweet – perhaps the most so of our sextet. 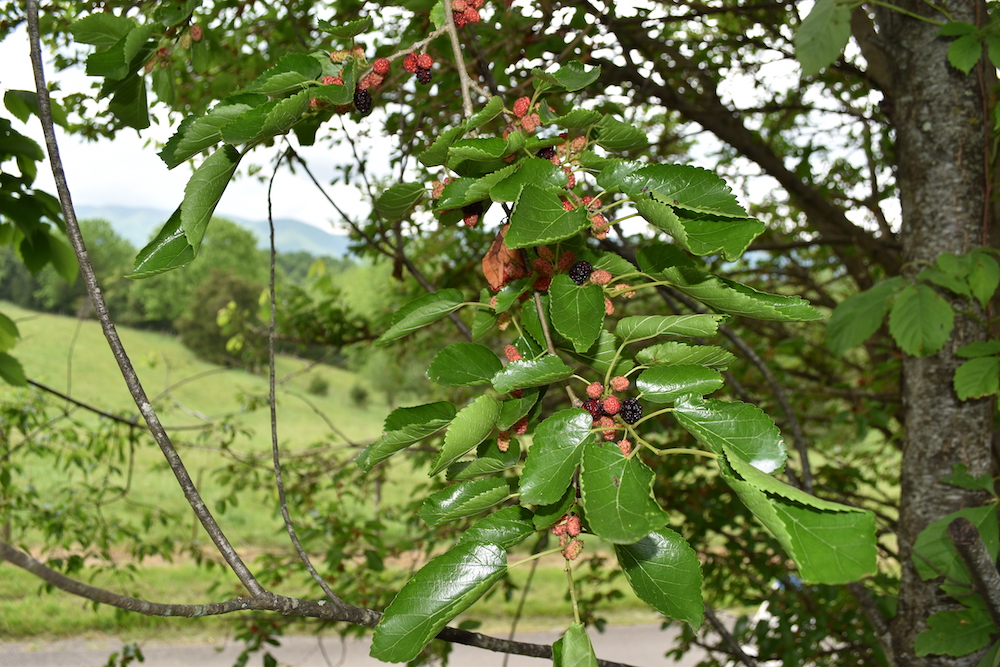 Raspberries ripen next in our state and are my personal favorite among the summer six. Rubus occidentalis features purplish black drupes which are much sweeter than those of its close relatives, the blackberry and dewberry. The blue vines can easily be spotted in any mixed berry thicket. Leaflets occur in groups of threes or fives and the undersides are silvery green.

Wineberries ripen shortly after raspberries do and for a few marvelous days come late June in Southwest Virginia, my wife Elaine and I can gather both species. Wineberry thorns are smaller and much less menacing than those of the other Rubus summer producers, and Rubus phoenicolasius is also the only one that displays ripe red berries. 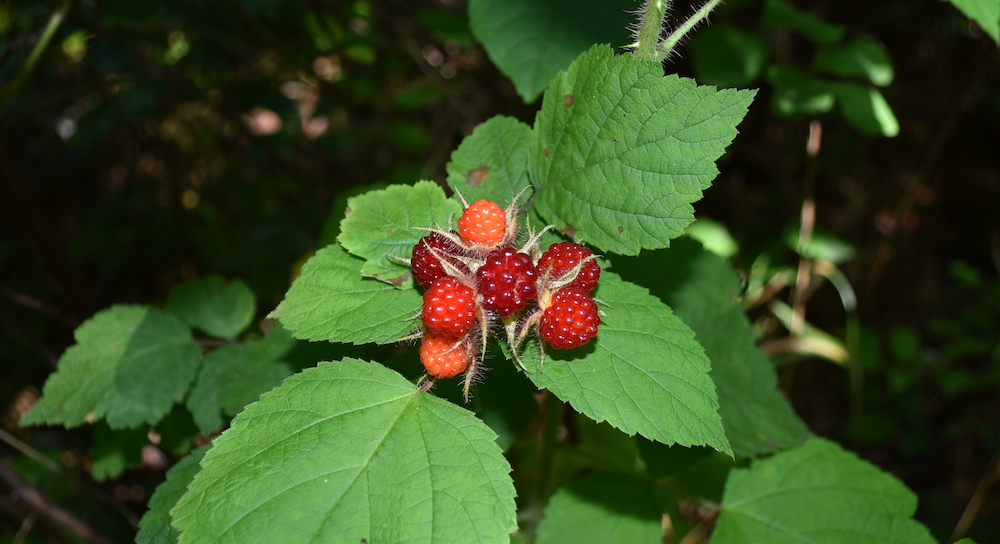 Blackberries (Rubus allegheniensis) and the Northern dewberry (Rubus flagellaris) ripen next and the drupes are very similar in size, color, and taste though I deem the fruits of the latter slightly sweeter. Another difference is that dewberry leaflets typically come in threes and the vines creep along the ground whereas blackberry leaflets have three to five components and the vines are upright. 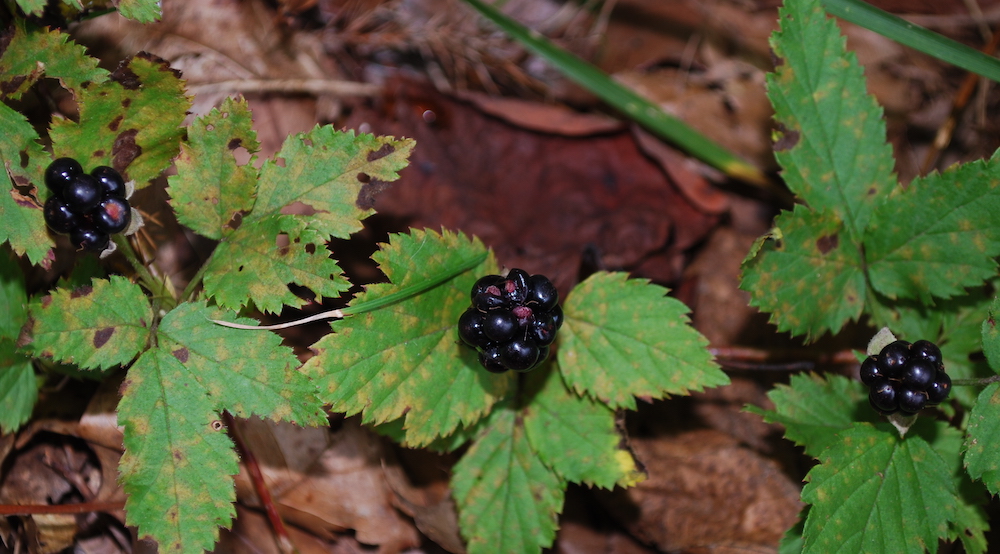 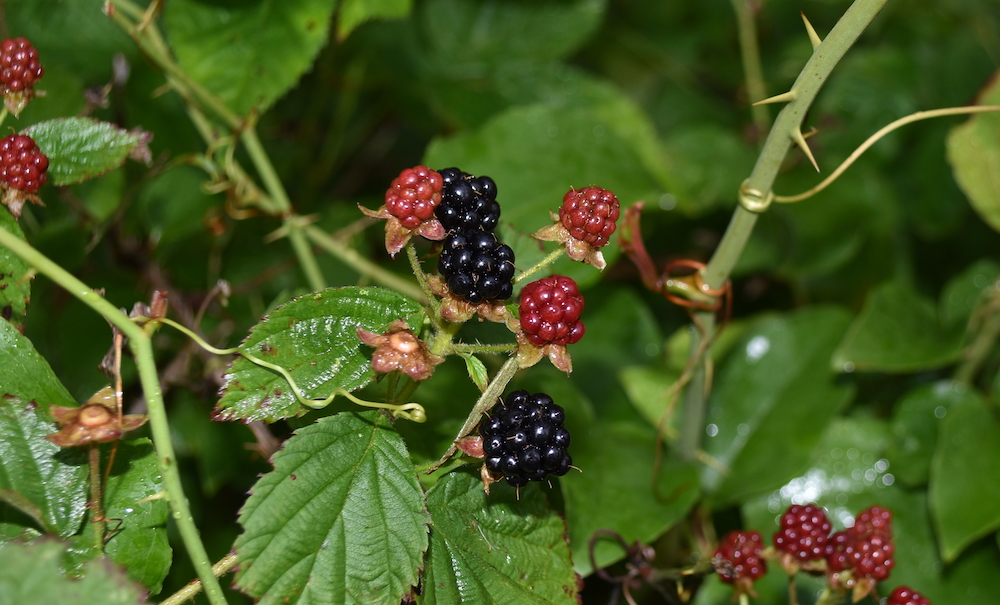 The highbush blueberry (Vaccinium corymbosum) is the last of our summer berries to ripen. I rarely find enough to make even a small cobbler, so the fruits usually end up as toppings on oatmeal or cereal. The elliptical leaves are about two inches long, and the shrubs themselves often exist in dense copses. 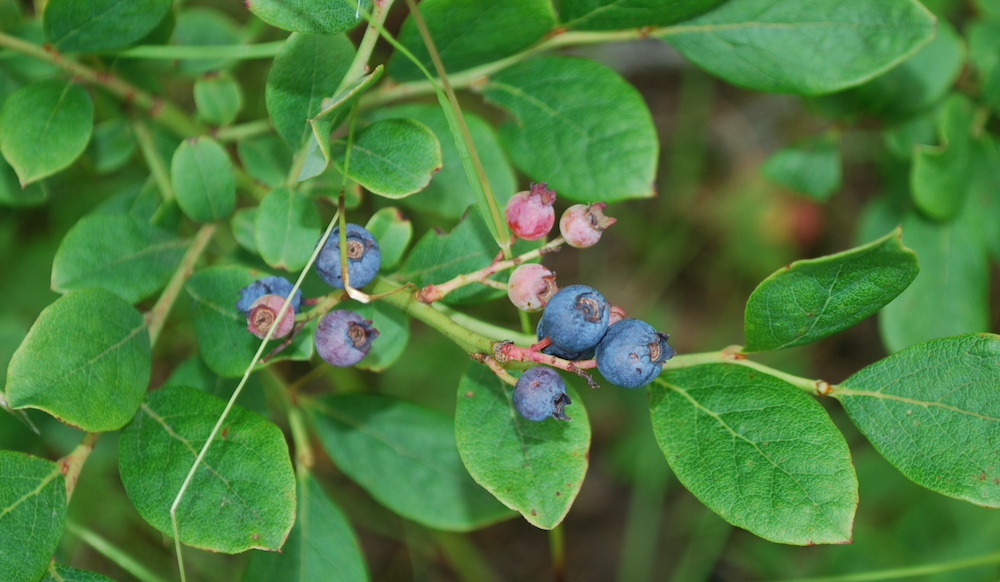 Where to Go for Summer Berries

I have rarely been turned down when I’ve asked rural landowners to let me pick their wild fruits. I improve my chances of access by promising to swap a jar of jam for berry picking rights. DWR boasts 44 Wildlife Management Areas widely scattered across the Commonwealth, and Katie Martin says they make for excellent destinations for Rubus enthusiasts. Anyone with a Virginia hunting or fishing license can gather berries for free on state WMAs. Other folks will need to purchase an access permit or a Restore the Wild membership, all available on GoOutdoorsVA. Contact DWR regional offices to learn where recent habitat disturbances have taken place on a WMA near your home, as that type of habitat is where you’re most likely to find Rubus fruits.                 .

One aspect that summer’s super six have in common is they all perform well in pies, cobblers, pancakes, waffles, jams, smoothies, muffins, and other delights. Here’s Elaine’s recipe for wild berry pie.

Reduce heat to 375°F and bake further for 38 to 40 minutes until top crust is golden brown and fruit is bubbling. Pie will set up better if allowed to cool at least ½ hour before serving.