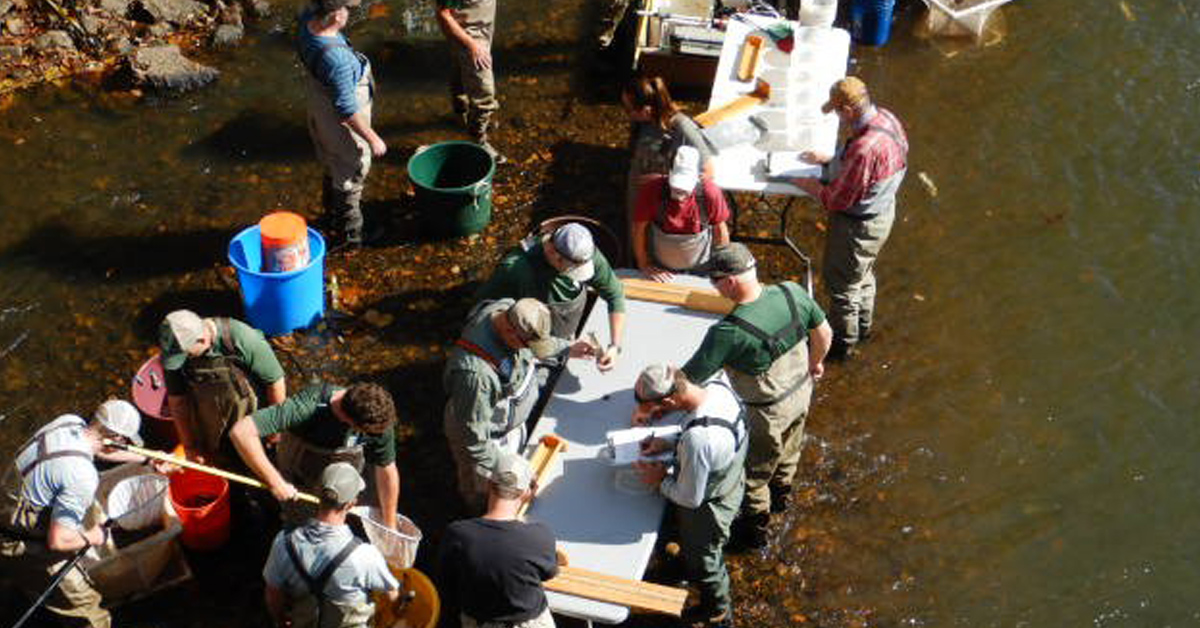 Virginia Department of Wildlife Resources (DWR) staff, Trout Unlimited members, and volunteers sampled five sites on the Smith River in late October using the barge method of sampling, which requires a large contingent of biologists and volunteers. This is the same method used several years ago before DWR Region 2 acquired an equipment-laden raft that is used for most sampling on the Smith.  So why did DWR go back to the old method?

“The goal is to use this gear to collect native species (i.e., forage fish) and age-0 brown trout, neither of which is sampled very well with the raft unit we typically use,” said Region 2 Fisheries Biologist George Palmer. “We have older data (collected with barge units) for comparison.” Since a mudslide disrupted the powerhouse of the Philpott Dam in 2020, the water flows in this section of the Smith have been regulated by sluice gates and low flow valves, allowing for more consistent, lower water levels and cooler water.

“The whole point to all this will be to see how the cessation of peak power production has impacted the native species and brown trout recruitment,” Palmer continued. “We’ve seen a positive response in brown trout growth and sizes, but don’t really have the native species info. Should we be able to document a significant improvement in the native fish community, we hope to take this to U.S. Fish and Wildlife Service (USFWS) so that they can then work with the Army Corps of Engineers to reduce/eliminate peaking flows if they ever bring the generation units back on line.”

So what’s a “barge” look like? They are made of metal or plastic and resemble an oversize bathtub with a shoulder harness attached. They’re pulled through the water by the strongest biologists in the crew. Each barge (we had three of them) holds a gas generator, electronics control box, assorted cables attached to probes, and a 50-quart cooler or tub for holding the fish. 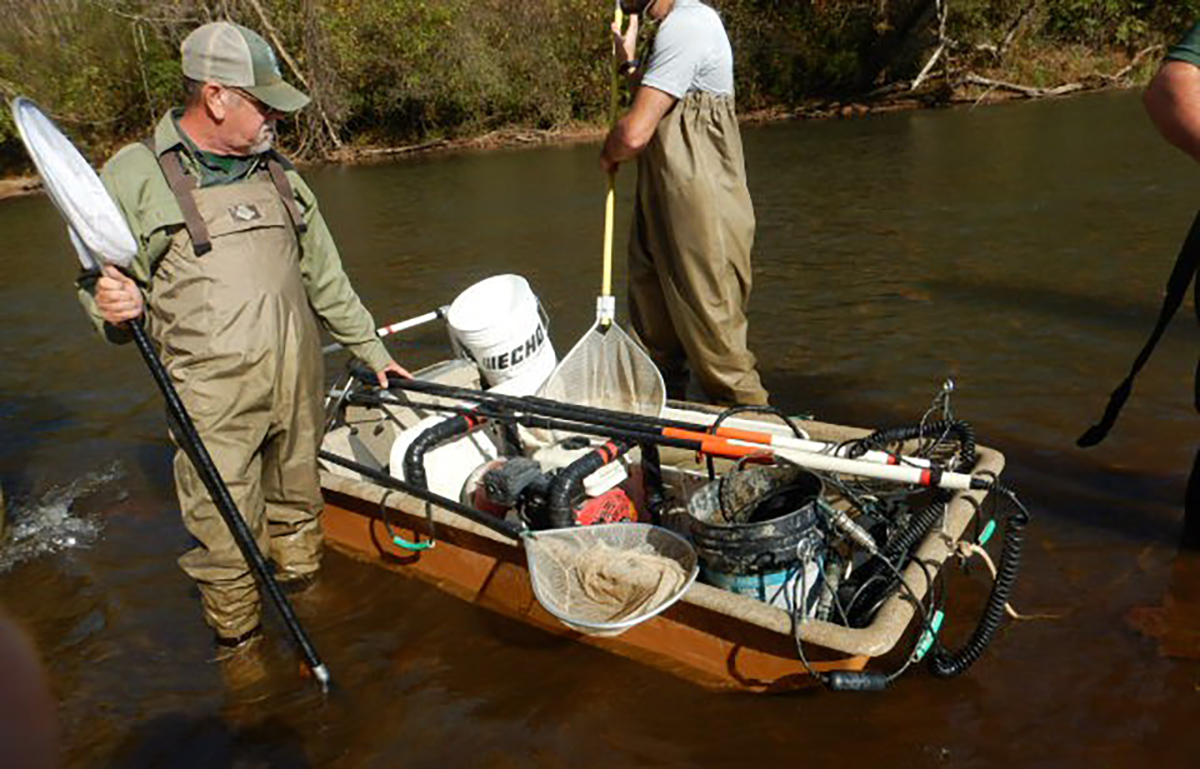 Here is what it looks like in action. You’d think nothing would get by this many people, but that is not the case. DWR Region 2 Fisheries Manager Scott Smith and Palmer, the DWR biologist assigned responsibility for the Smith River, say the barge method collects about 30 percent of the fish, and the raft method seven to 10 percent. The barge method is very labor-intensive, but collects smaller fish, which is really what we wanted to study in this sample. The raft method only requires a handful of people, but only covers a narrow section and collects the larger fish. 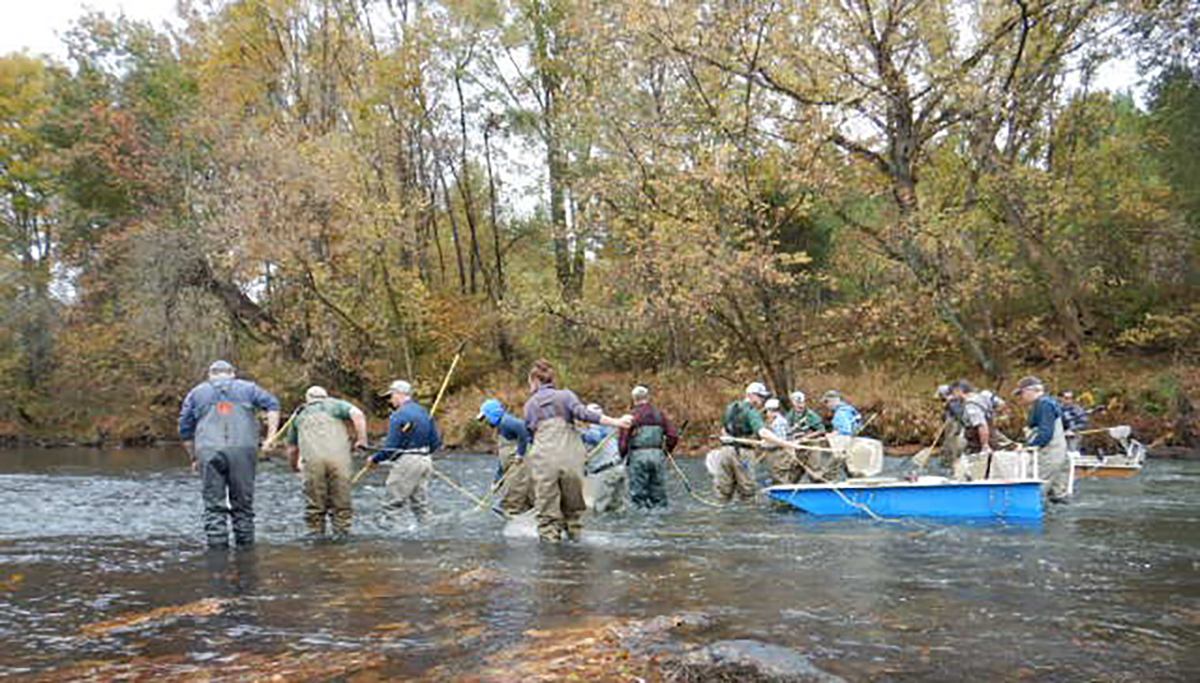 Day one of the three-day sample starts at the Bassett canoe/kayak ramp located in North Bassett. Each day starts with a safety briefing and general overview of what we are looking for. 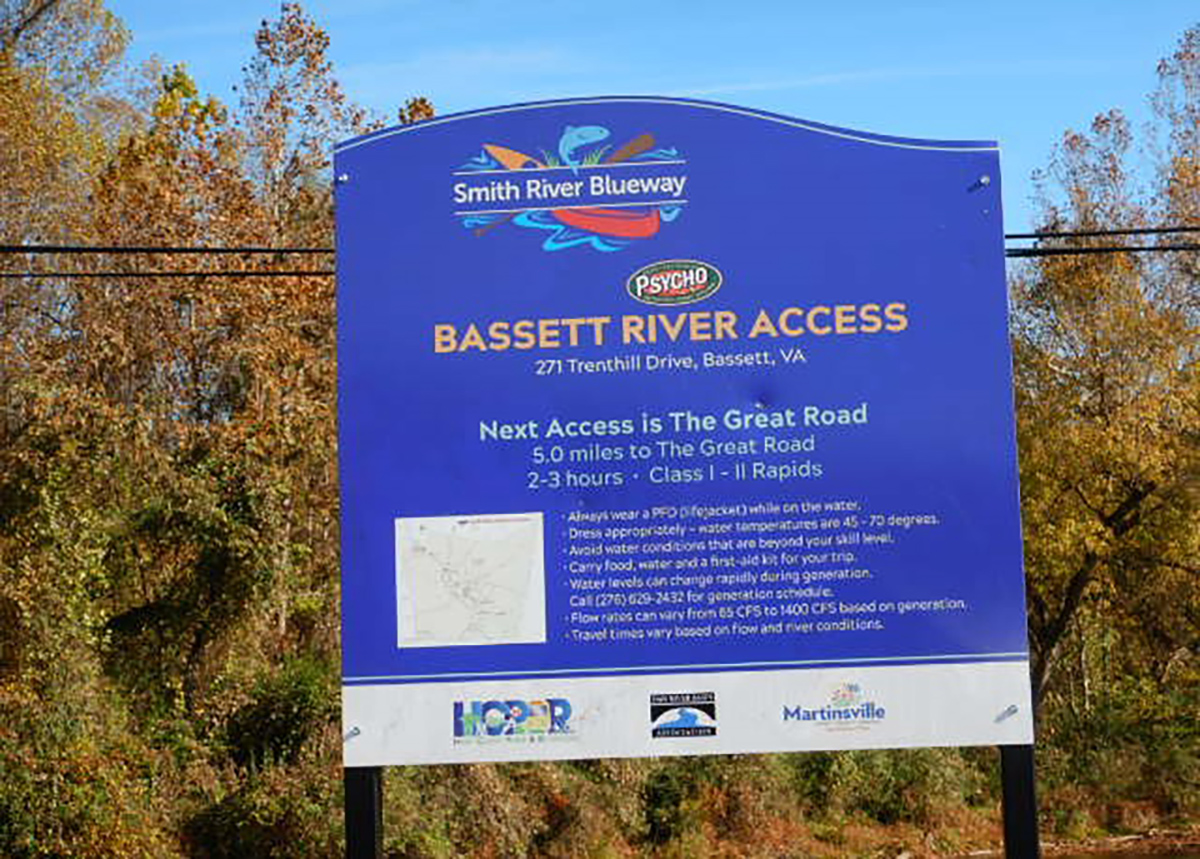 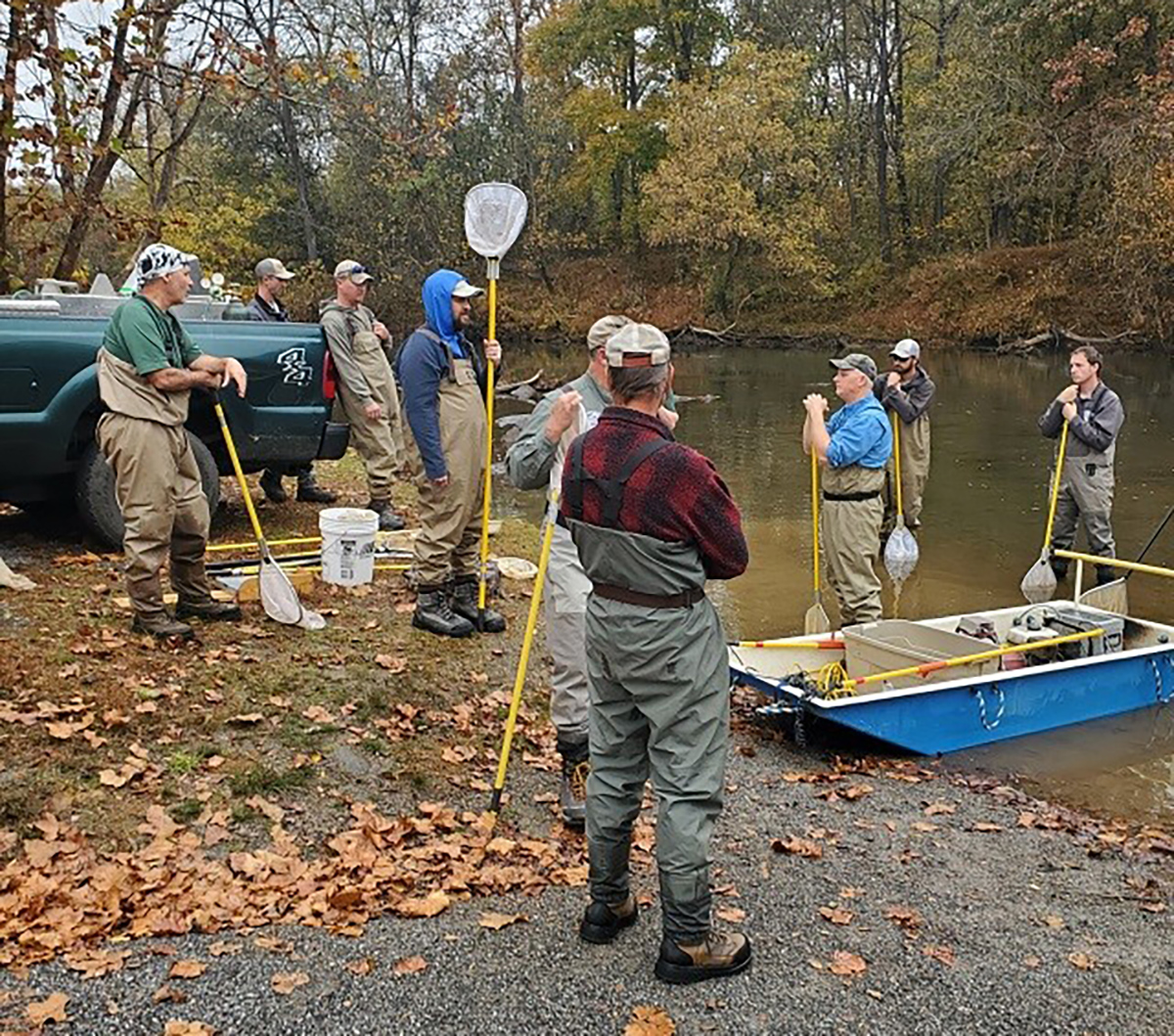 We only cover a pre-designated length of river for each sample site. These are the same sections sampled in previous years. By doing this, the biologists are able to compare changes. 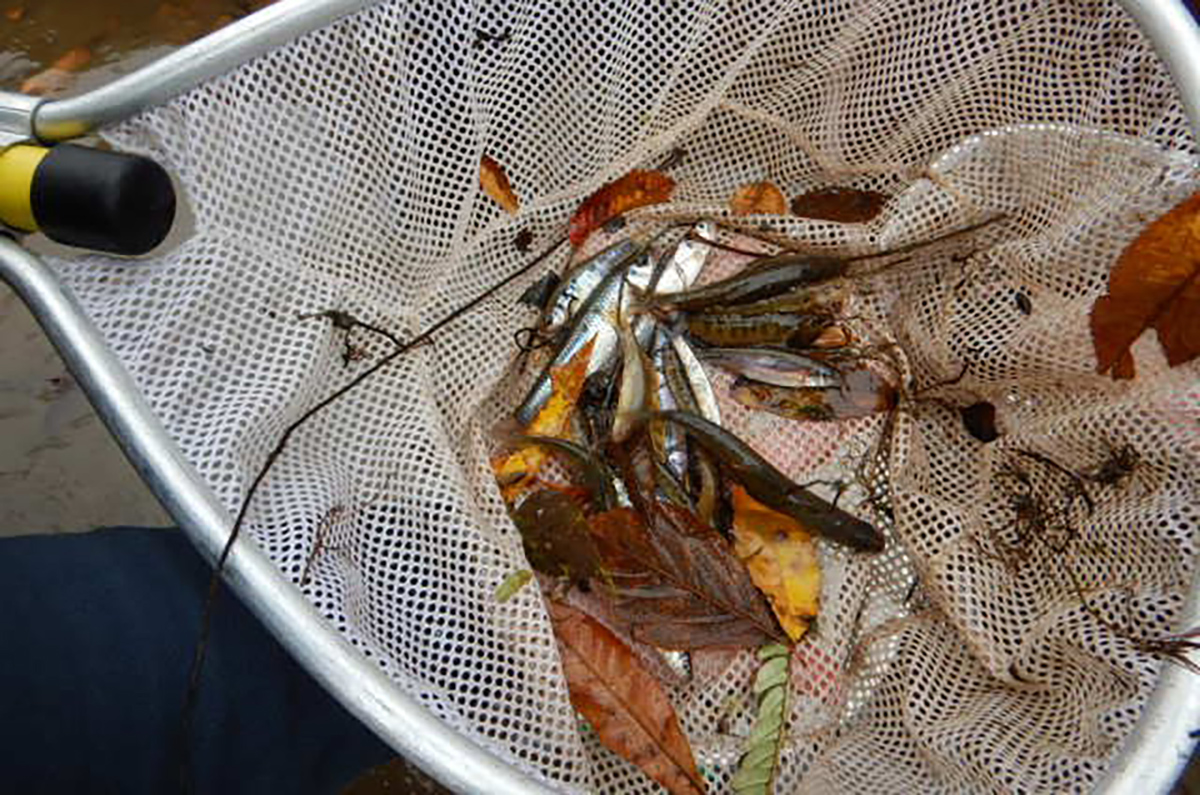 The collected fish are off-loaded from the barges and placed in holding tanks where each is identified, checked for general health, and measured. Although our emphasis was on non-game fish and recently spawned brown trout, we also collected some nice rainbow and brown trout. 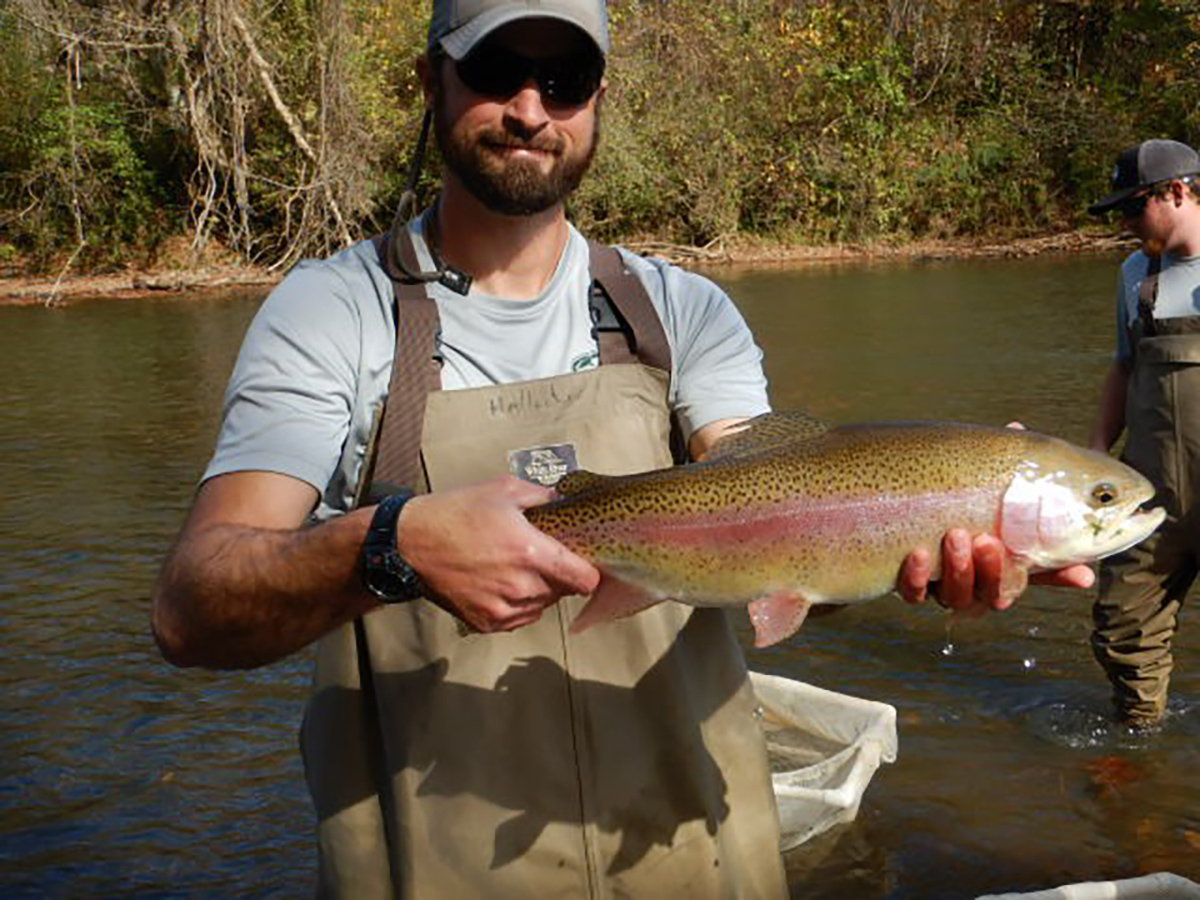 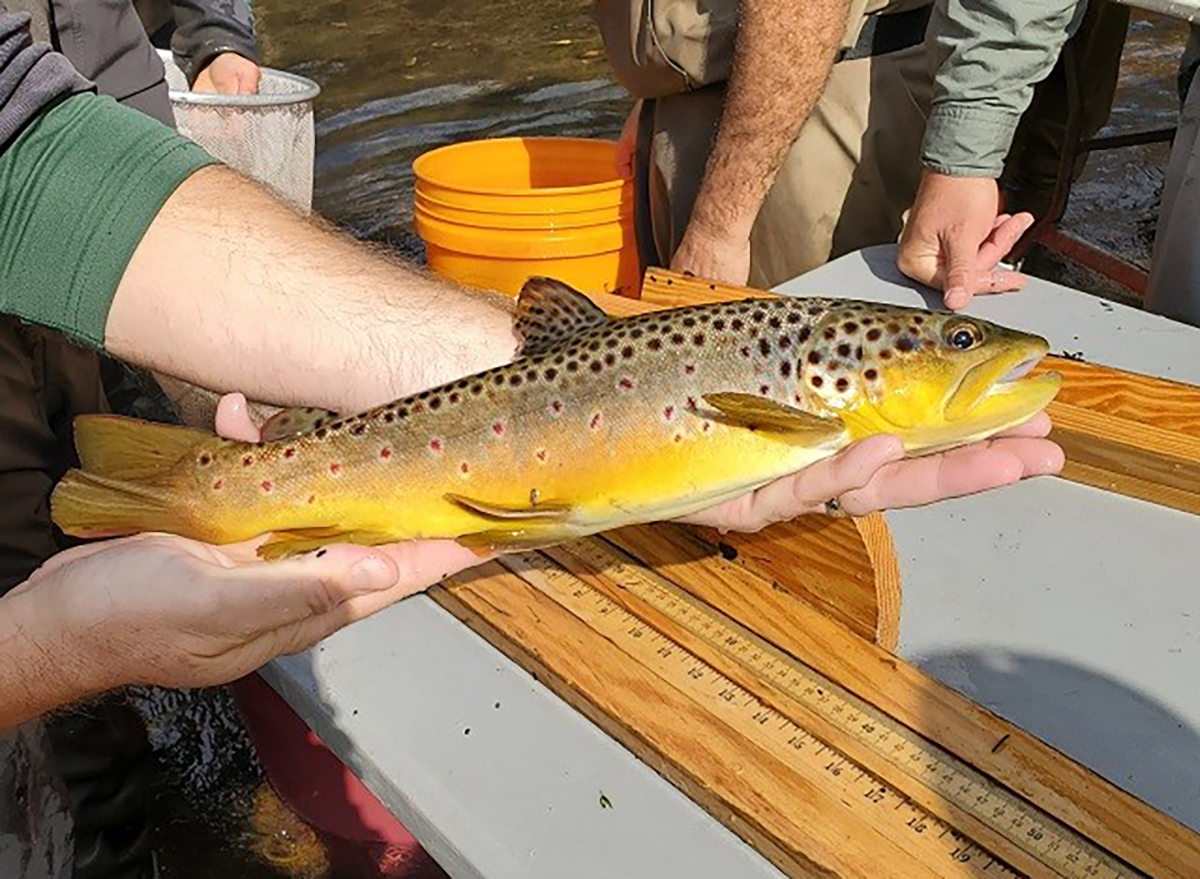 Trout less than 10 inches were fin-clipped (for later identification) and moved to below the Martinsville Dam where previous samples have shown they have more food. Many grow into trophy-size fish. 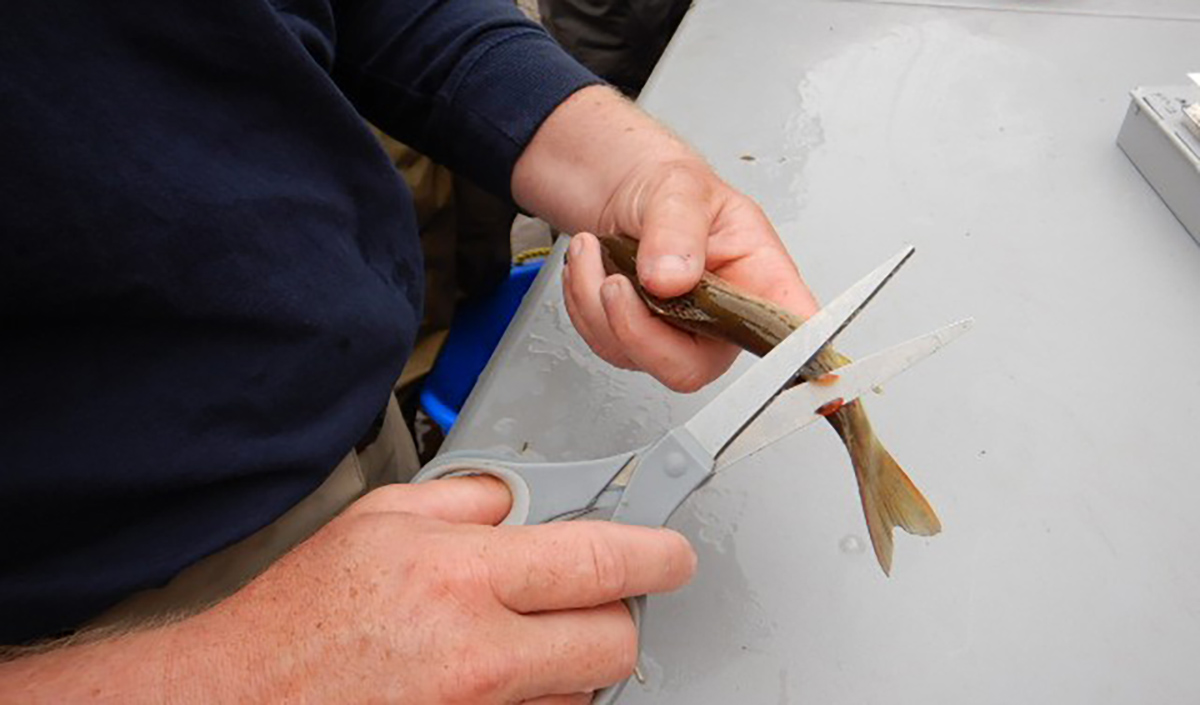 Lots of non-game or forage fish were collected as well. We had a team of biologists who specialize in non-game fish identify each species and collect data from them. I’ve been helping DWR sample the Smith River for more than 25 years and can attest to the fact that we are seeing more non-game fish than any time that I have been involved. 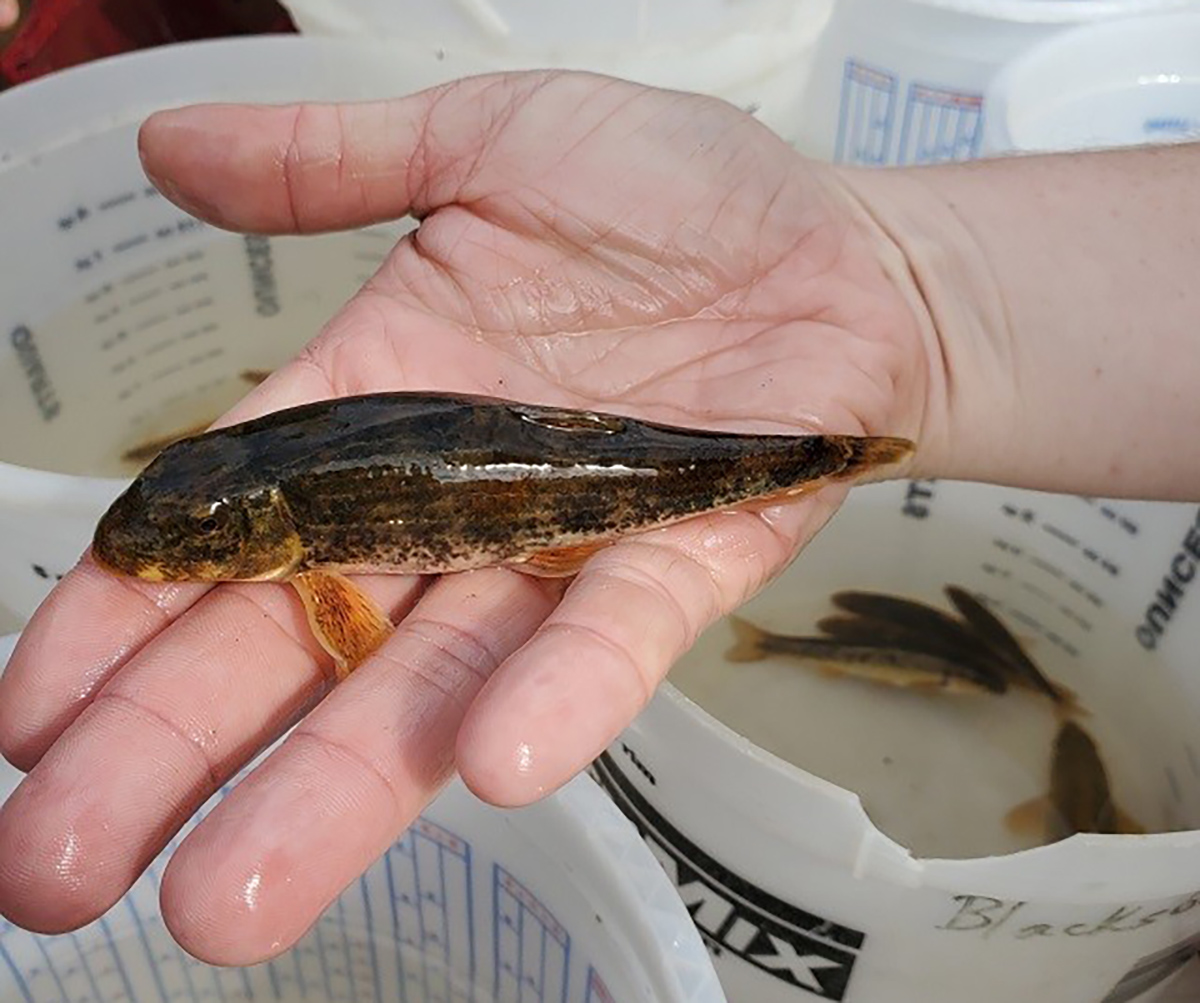 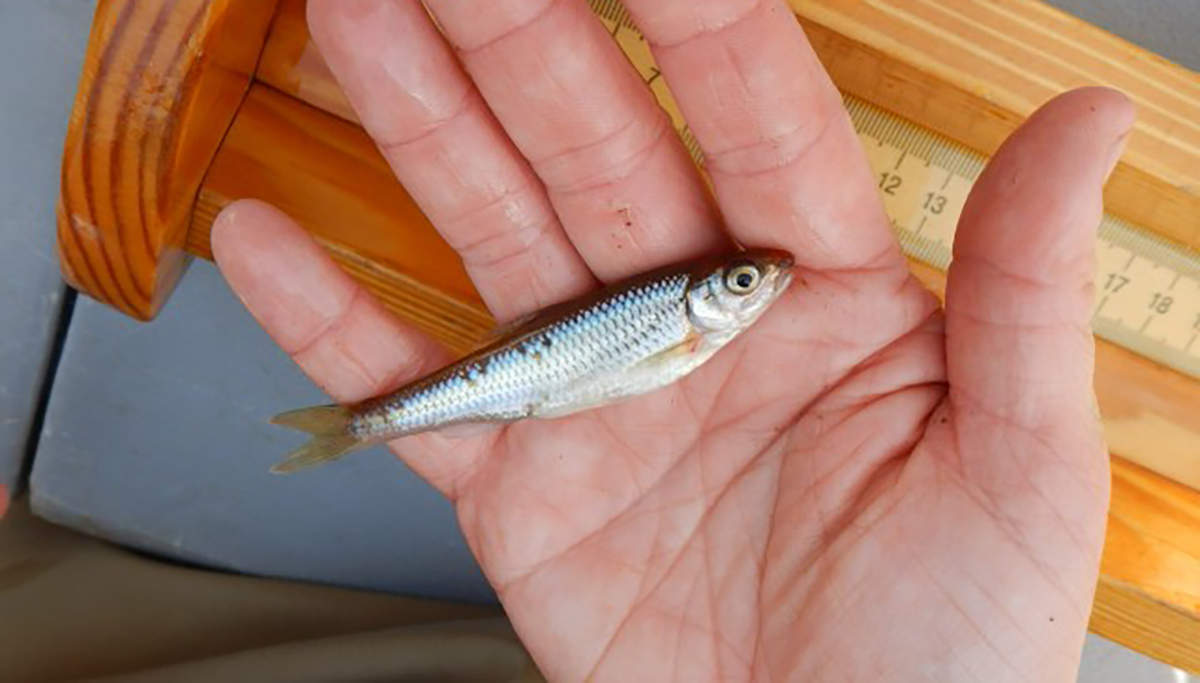 We even collected a few small bass. 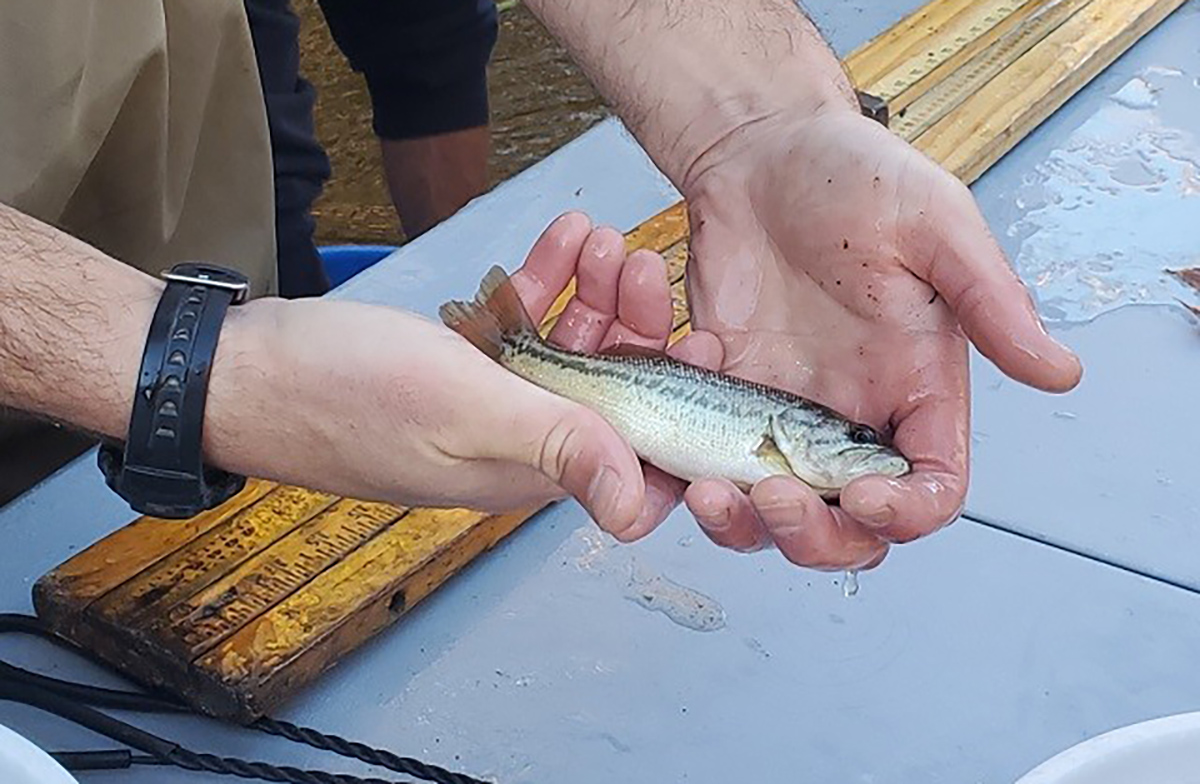 It may look like a lot of confusion, but these folks have been doing this for a long time and work together like a well-oiled machine. 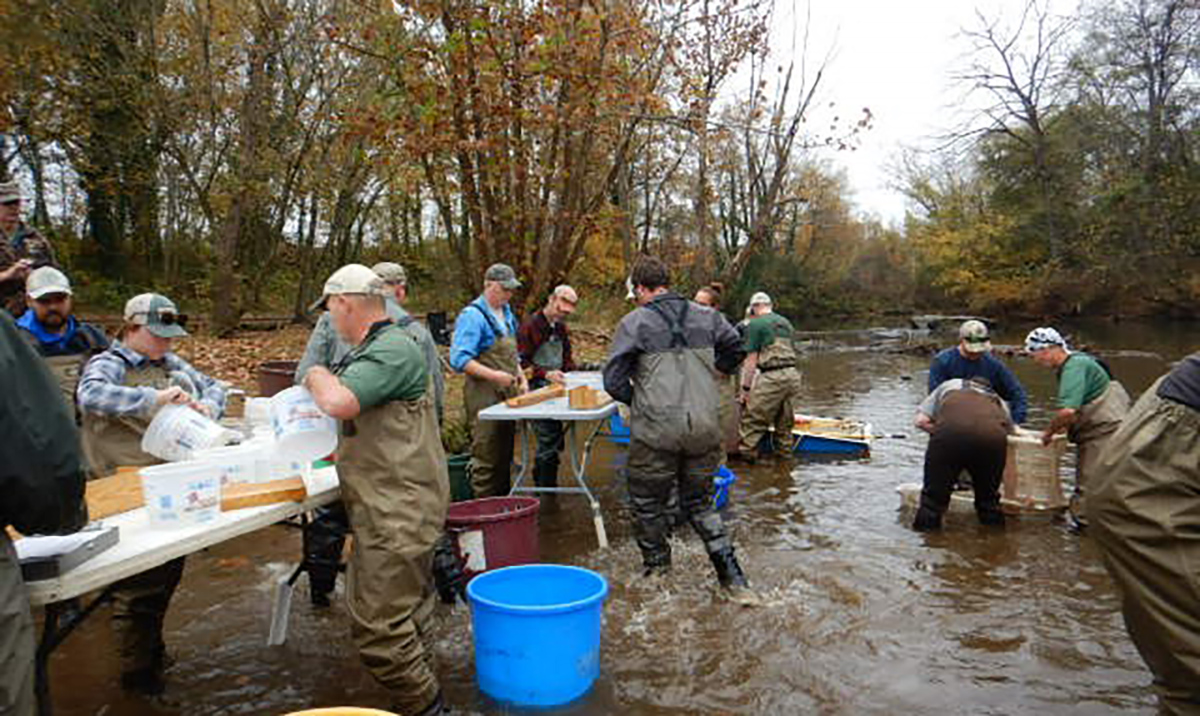 It doesn’t count if you don’t write it down, right? The data is then entered into a computer where it is analyzed to help make management recommendations. 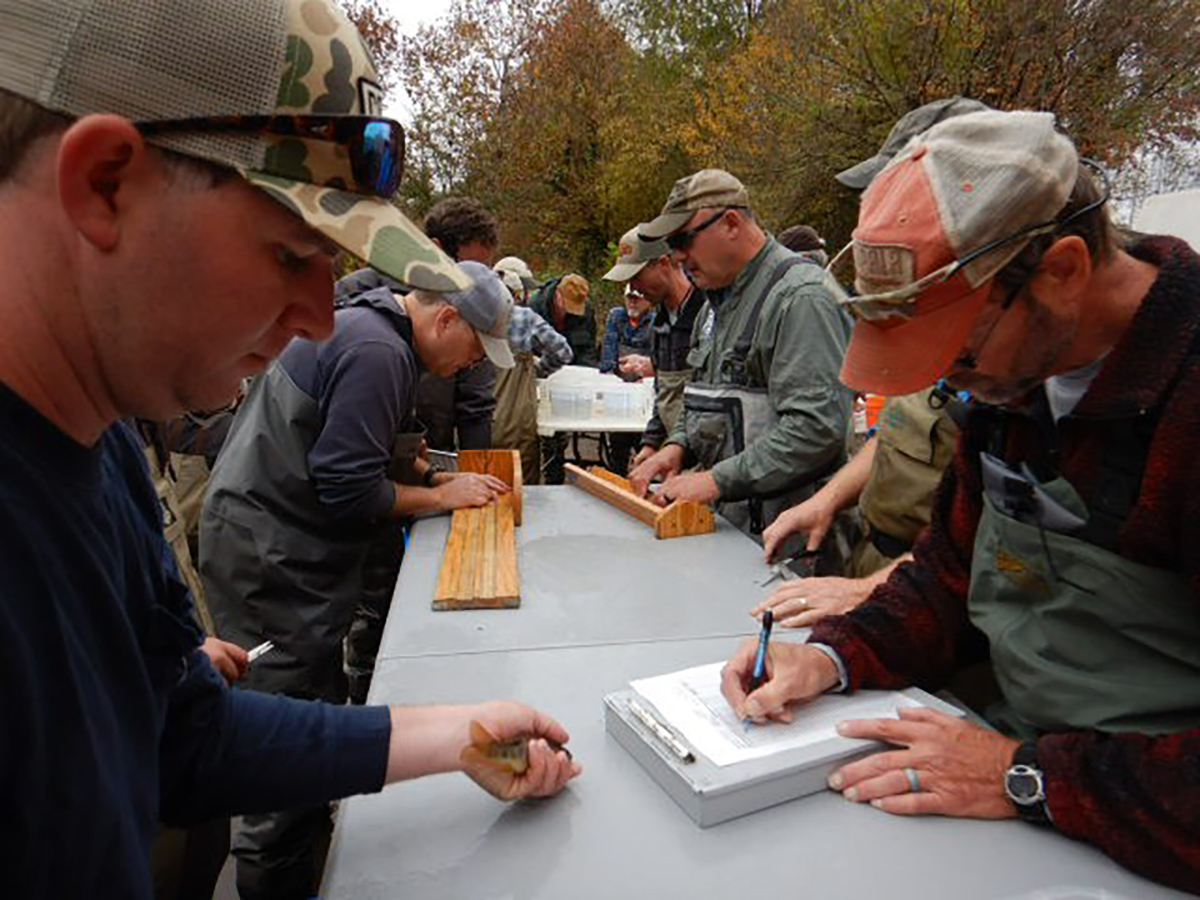 And so it goes for three days. We sampled a total of five sites with pretty much the same result.

It’s all over except sorting and cleaning of equipment. 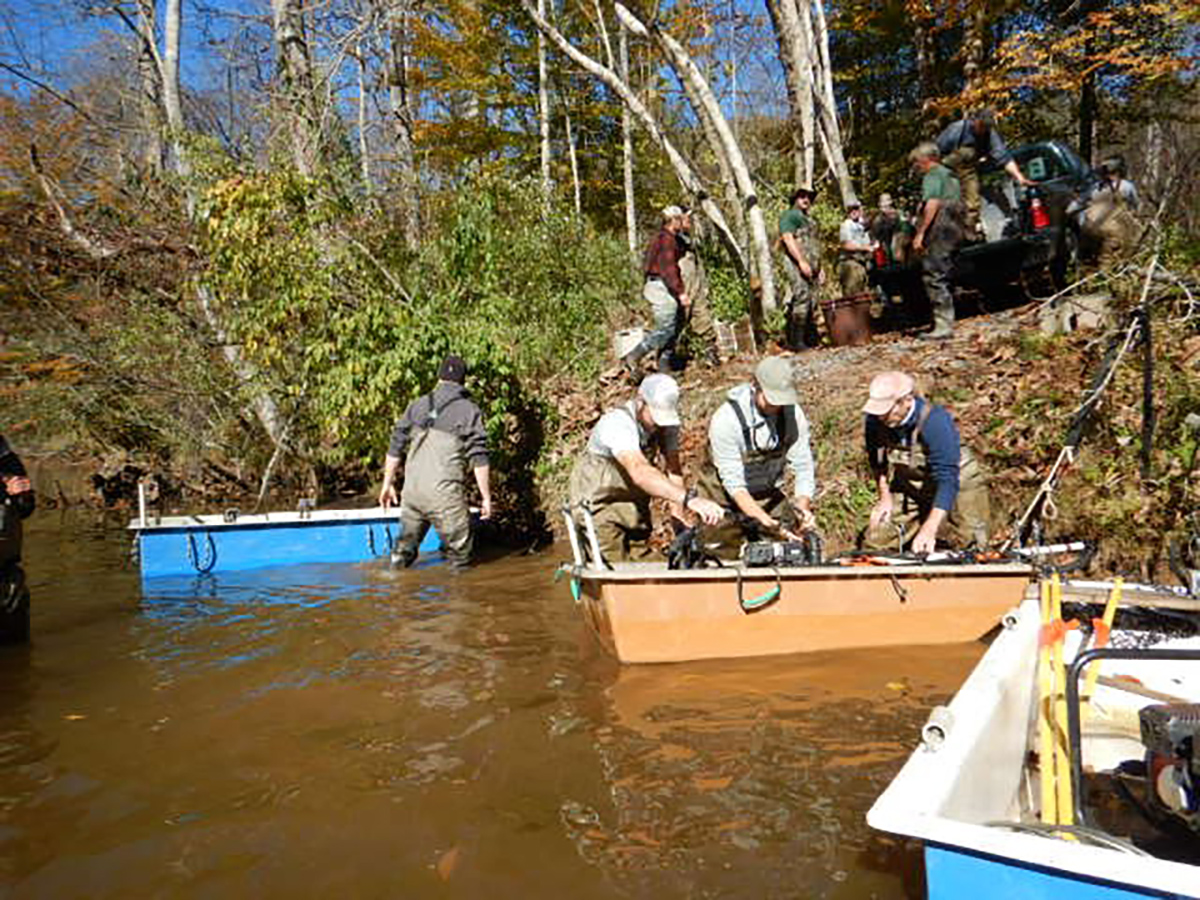 As a layman who has fished the Smith River for about 30 years, it is my observation that there is no shortage of fish. We never used to see many of this year-class of recently spawned brown trout at locations a very far distance from Philpott Dam. They are now spawning throughout the river.

Non-game or forage fish were almost nonexistent when I first started fishing the Smith. They appear to be making a comeback in the past few years. Palmer will analyze the data and brief his findings at the Smith River Trout Unlimited meeting on Thursday, December 1 at-6:30 pm, Raina’s Restaurant, Martinsville, Virginia. The meeting is open to the public.