Snakes on the Water 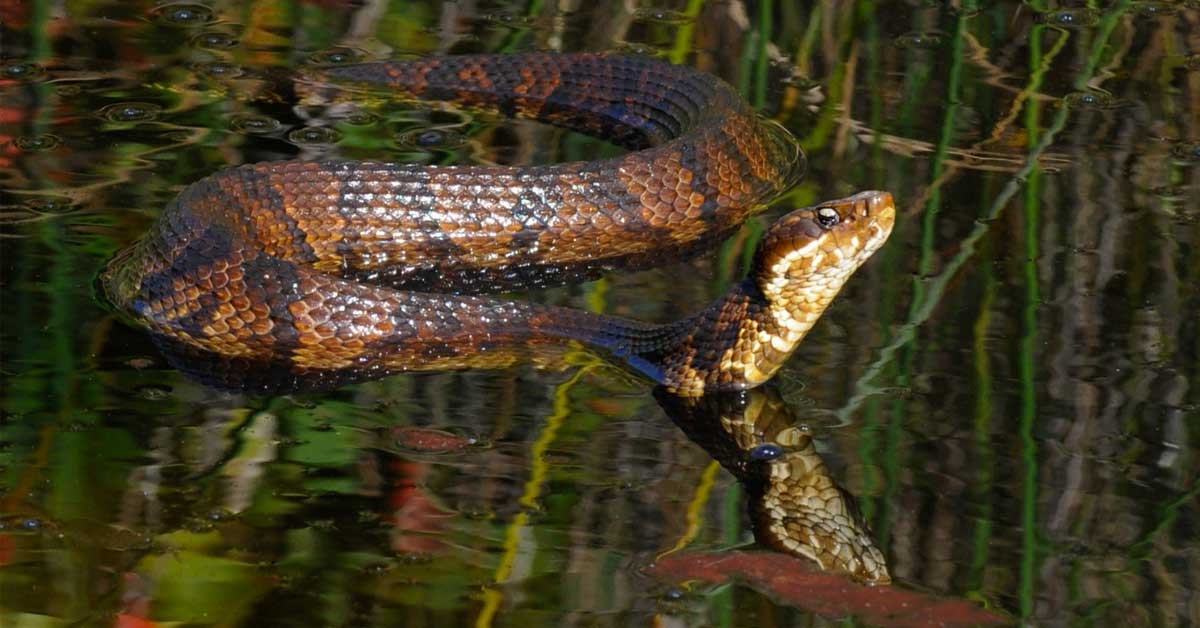 Spring is here and the fishing is heating up. It’s also that time of the year when lots of other critters are heating up and becoming active. Among these critters are watersnakes and cottonmouths (aka “water moccasins”). Here are some helpful tips on identification and behavior of these often misunderstood animals.

The distribution of cottonmouths in Virginia is primarily limited to the southeastern part of the state, particularly the southern regions of Virginia Beach and Chesapeake with isolated populations in Brunswick, Chesterfield, Dinwiddie, Greensville, Prince George, Southampton, Surry, Sussex, and York counties, and the cities of Suffolk and Newport News. On the other hand, watersnakes are found statewide in every county and municipality. They also occupy a wider variety of aquatic habitats including lakes and reservoirs, streams, rivers, ditches and even ornamental backyard ponds. In Virginia, there are three species of watersnake: brown watersnake, northern watersnake and plain-bellied watersnake. The northern watersnake being the most widely distributed and the brown watersnake the largest, which can reach a length of nearly 6 feet. Of the three species, the northern watersnake is by far the most misidentified as a cottonmouth. 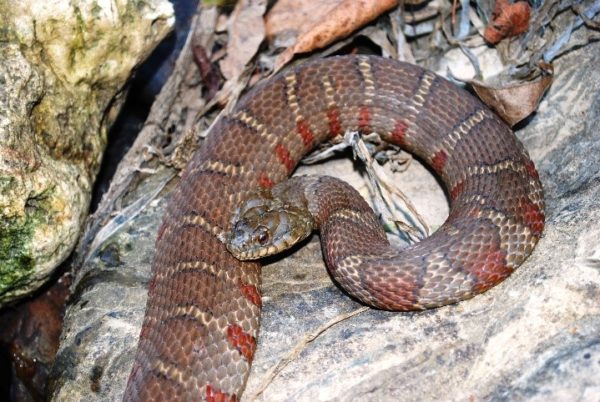 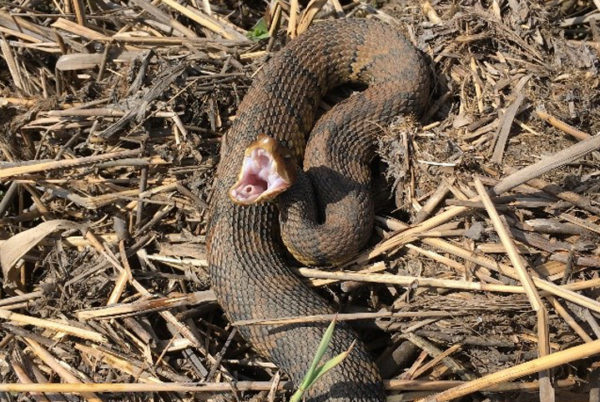 Northern watersnakes (Nerodia sipidon) are brown to gray with varying amounts of red, yellow and white. The body is thick and robust with several blotches and crossbands on the back. Although the head is rounded in shape, they will often flatten their head as a defensive response giving it a more “diamond-shaped” appearance. Northern cottonmouths (Agkistrodon piscivorus) are also a heavy-bodied snake, however, their coloration is more dark green to almost black with several dark brown to black hourglass-shaped bands. The head is flattened and angular in appearance. Another common way to identify cottonmouths from watersnakes is how they swim. Unlike watersnakes that swim with their body just below the surface, cottonmouths float on the water. However, other species of nonvenomous snake, such as the eastern hog-nosed snake, will also float on the water. 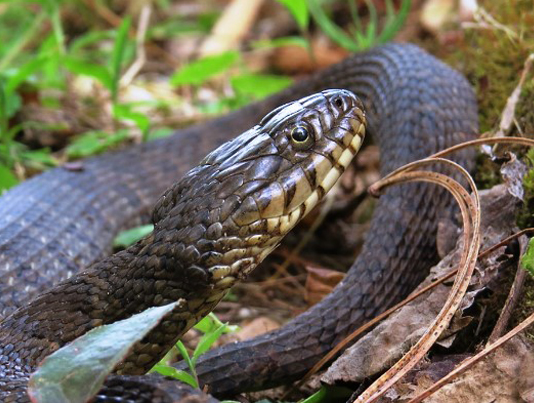 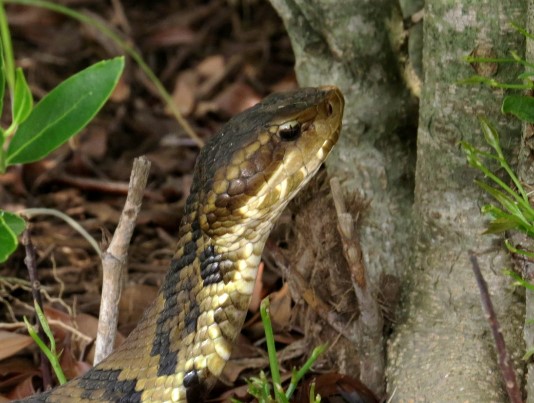 Although cottonmouths put on a well-known defensive display known as “mouth gaping”, their aggressive behavior is the stuff of folklore and fish tales. Stories of them attacking boats and water skiers is pure fiction and the imagination of Hollywood movies and television. For those of you that are a little longer in the tooth might remember the famous scene in Lonesome Dove of a cowboy falling into a river and being attacked by a “nest of cottonmouths”. This is probably the beginning of the urban legend of water skiers falling and being attacked by cottonmouths. In fact, cottonmouths are quite reluctant to strike and will usually always choose flight over fight. 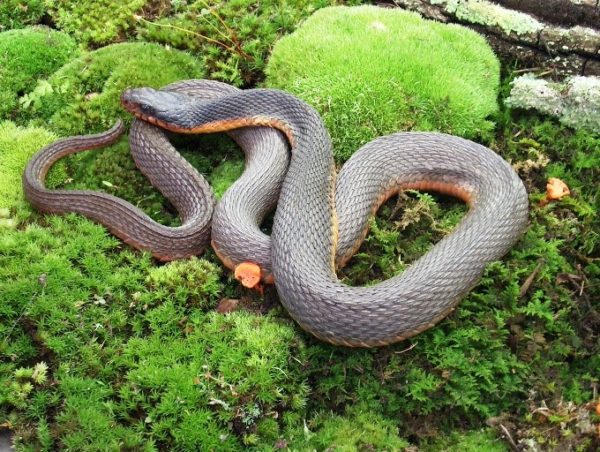 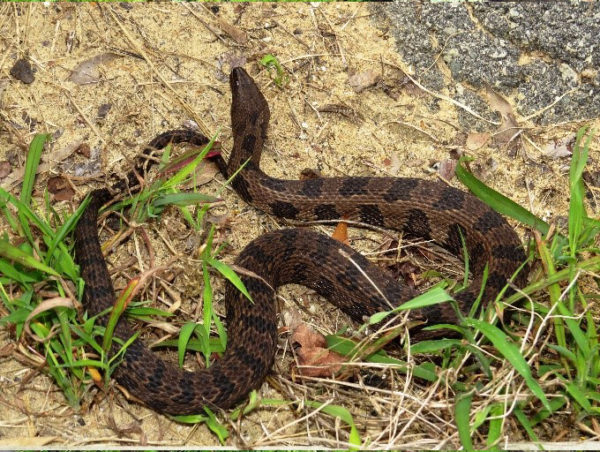 Something that many freshwater anglers have experienced is a snake falling from a bush or tree into their boat. This experience can be quite startling to even the most hardcore angler. However, an overwhelming majority of these incidents are harmless watersnakes. Brown watersnakes and plain-bellied watersnakes are particularly notorious for this behavior as they can be found 20 feet up a tree basking on limbs overhanging the water. Being heavy-bodied, cottonmouths are not very good climbers and are seldom seen more than a few feet up in a bush.

We hope you enjoyed reading this article and found it to be informative. In the end, snakes just want to be left alone. A famous naturalist (Clifford Pope) once stated back in the 1850s, “snakes are first cowards, then bluffers and last of all warriors”. For more information on snakes, you can obtain a copy of A Guide to the Snakes and Lizards of Virginia at ShopDGIF.com or visit www.virginiaherpetologicalsociety.com/reptiles/snakes/snakes_of_virginia.htm