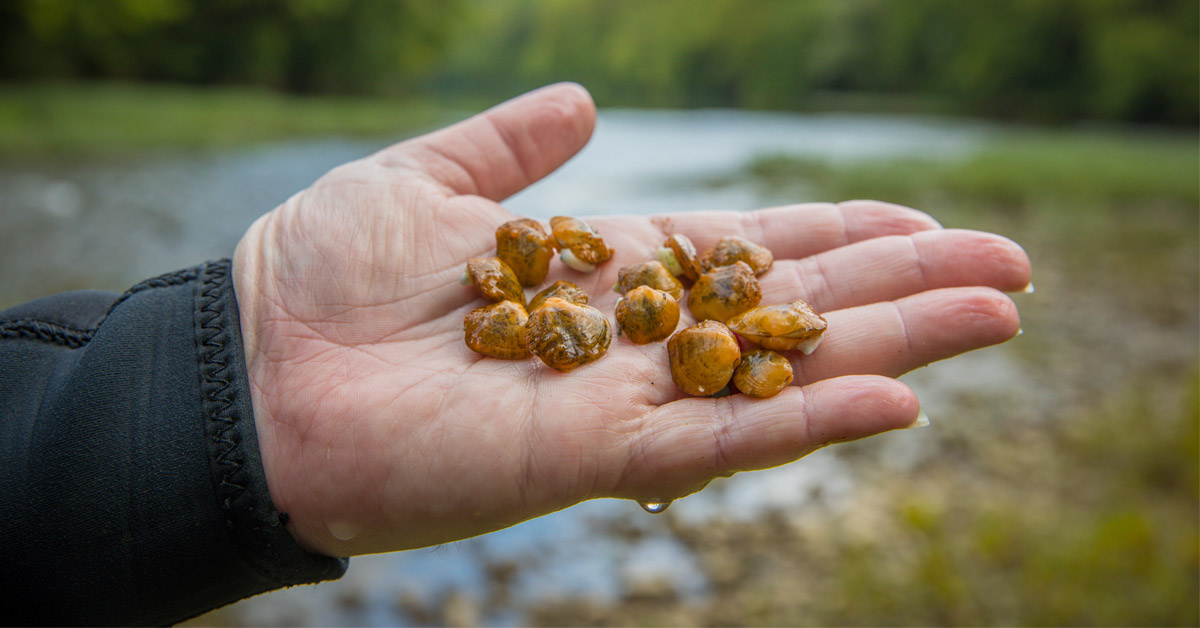 Appalacian monkeyface mussels are one of the rarest species in Virginia, but the staff at DWR's Aquatic Wildlife Conservation Center have succeeded in propagating them and releasing them into the Clinch River.

Who could have imagined that the routine act of walking by a tray of captive Appalachian monkeyface (Theliderma sparsa) mussels could help solve a decades-long mussel mystery?

The Appalachian monkeyface is the rarest mussel species in Virginia, and one of the rarest in the United States. Less than 50 individuals have been documented alive in the last 20 years, and its only known native population is in a small section of the Powell River in southwest Virginia and northeast Tennessee. It has disappeared from other streams due to poor water quality and habitat destruction throughout the upper Tennessee River Basin.

Tim Lane, DWR Southwest Virginia Mussel Recovery Coordinator, noted that the Appalachian monkeyface was known to be in danger of extinction in 1976 when the Endangered Species Act was passed by Congress. “It was one of five mussel species that got listed immediately and it’s been endangered, since then,” Lane said. “There really hadn’t been any positive recovery steps that had been taken for the species.”

That all changed recently when Lane and his team at DWR’s Aquatic Wildlife Conservation Center (AWCC) in Marion successfully propagated and raised 125 Appalachian monkeyface, then released them into the Clinch River in the first re-introduction of the species into Virginia waters. “It’s a big deal for us,” Lane said. “The main reason it took so long to get to this point is that the Appalachian monkeyface doesn’t have a straightforward propagation process. Some species, it’s like baking a cake for us—we know what to use and how to do it. This species, it was like astrophysics. It was close to impossible to figure out how to produce them.” 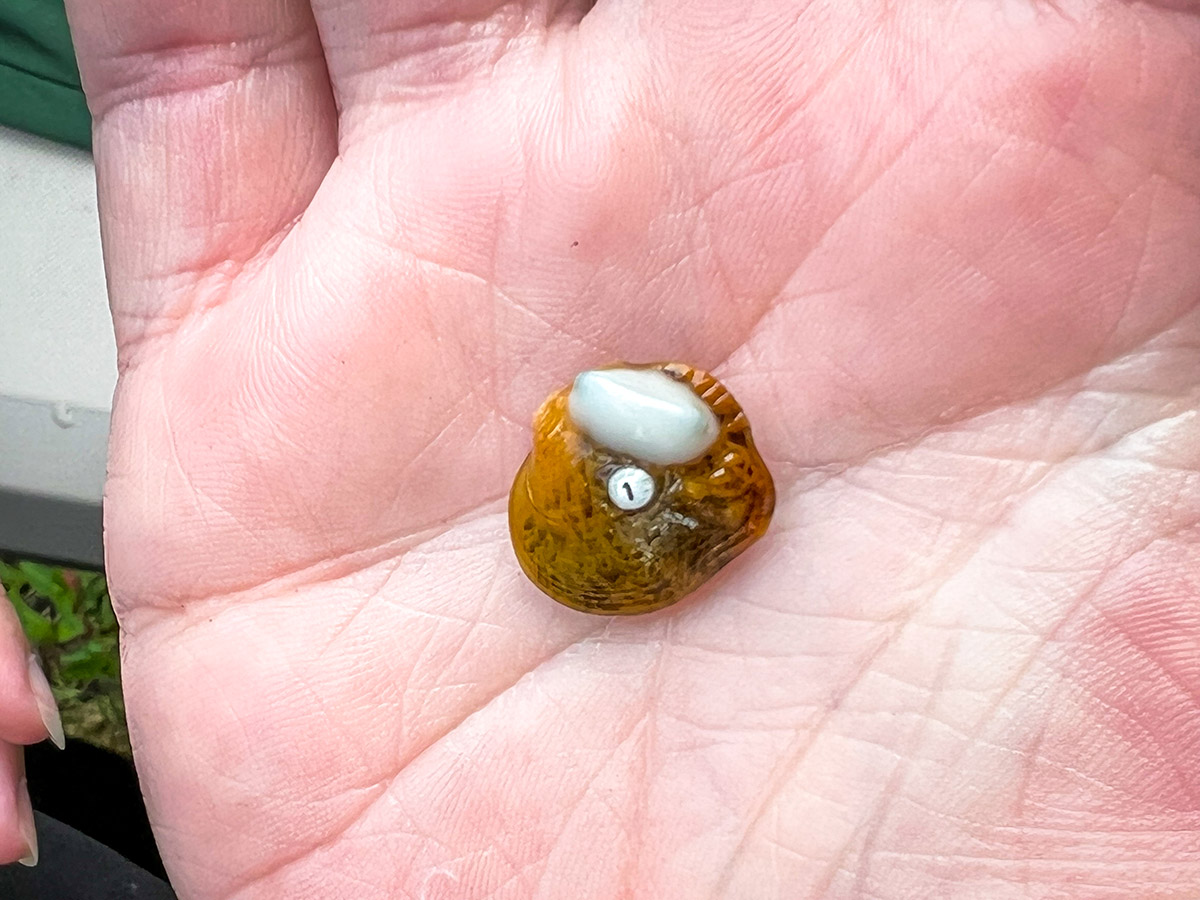 One of the Appalachian monkeyface juvenile mussels propagated and released by the AWCC staff. The mussel is tagged with a unique number and a Passive Integrated Transponder (PIT) tag, which will help biologists locate it in future surveys.

Because the Appalachian monkeyface is so rare in the wild, it’s difficult for biologists to find native adults to use for broodstock in propagation. “Since 2016, we’ve looked every year. I’d say we’ve spent somewhere between 500 and 1,000 person-hours searching for broodstock,” said Lane. The only known native population of Appalachian monkeyface exists in a 10-mile stretch of the Powell River straddling the Virginia-Tennessee border. In the time they’ve been searching for broodstock, they’ve found just seven individuals to bring back to the lab. 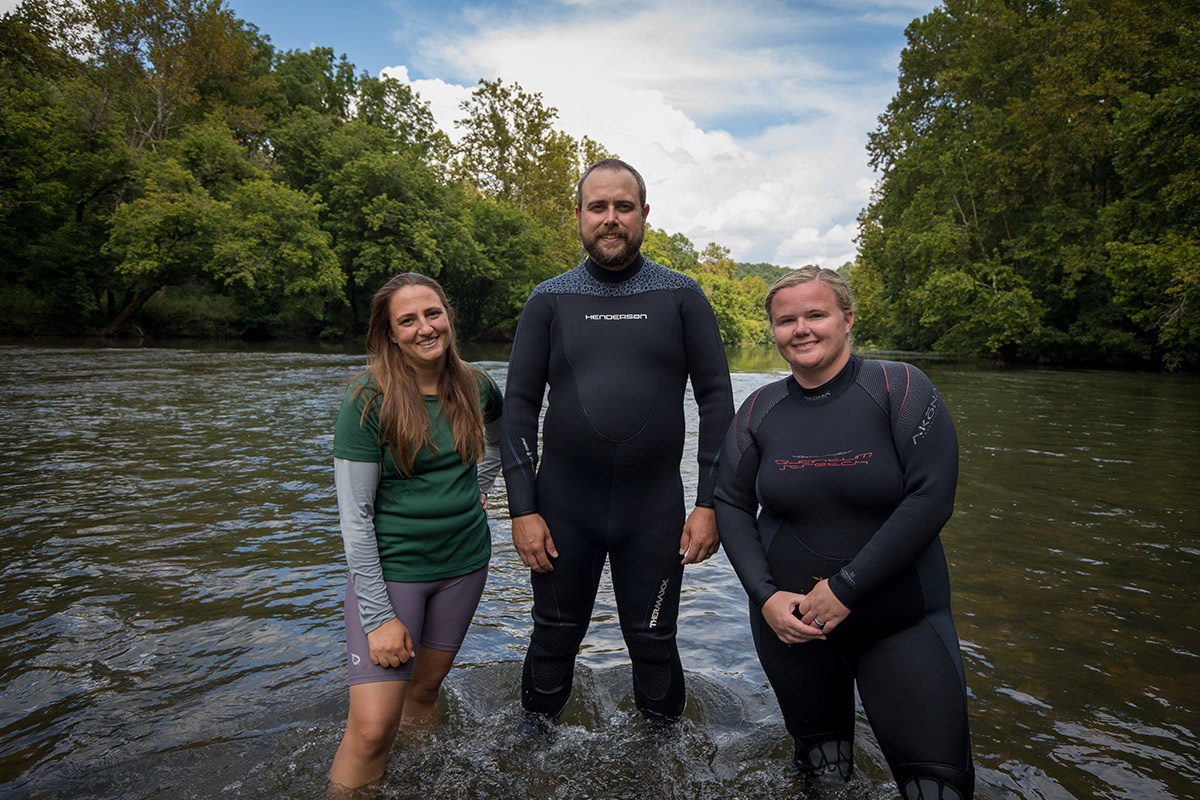 The AWCC team of (from left), Sarah Colletti, Tim Lane, and Tiffany Leach.

The first challenge was to determine the species’ fish host. For a mussel to reproduce, the gravid female releases parasitic larvae known as glochidia, which attach themselves to the gills of a specific species of fish (each mussel species has their own species of fish host). The larvae doesn’t harm the fish, but spends a few weeks on the gills developing into juvenile mussels, after which they drop off into the sediment on the river bottom and continue to grow. “We tried close to 50 different types of fish with the Appalachian monkeyface glochidia (larvae) and only two worked successfully, the blotched chub and the streamline chub,” said Lane.

Lane’s team, working with a grant from U.S. Fish and Wildlife Service (USFWS), began collecting a variety of potential fishes from 2018 to 2020 to test host suitability. Now they needed gravid (pregnant) adult females of the species. The Endangered Species Act actually prohibits the capture and possession of endangered species including the Appalachian monkeyface, so the AWCC obtained a special permit from USFWS to hold and study individuals of the species long-term. Of the seven found between 2018 and 2021 that are now in captivity at the AWCC, three are female.

But the AWCC staff still had to solve the puzzle of how the larvae transferred from the mussel to the fish host. Most mussel species have a “lure,” or a portion of their soft tissue that sticks out from the shell mimicking a fish, enticing the fish host to attack the lure, triggering the mussel to release its glochidia onto the fish’s gills. But the Appalachian monkeyface didn’t use an obvious lure, and biologists had problems figuring out what triggered its glochidia release.

“By holding them, we were able to not touch them and just observe their behavior,” Lane said. “We saw that if we ever walked too hard near the pan that they lived in, they would release all their larvae. It turns out that their release of larvae is triggered by water temperature, then vibration. They sense a vibration and poof, they release the larvae into the water. We just learned this recently, and biologists in the past wouldn’t have realized what was happening, but for sure they were disturbing them and triggering them to release the larvae in the process of collecting them.”

Once they solved the mystery of propagation logistics, in June of 2021 Lane and his team focused on creating a crop of juvenile Appalachian monkeyface. “From those three female mussels and 24 blotched chubs, we were able to produce a batch of about 800 baby mussels. Of those, 125 of them matured to the size of a dime and we were able to tag them and set them free,” Lane said.

AWCC staff worked with USFWS, The Nature Conservancy, Virginia Tech, and Tennessee Wildlife Resources Agency to pinpoint a spot in Russell County on the Clinch River to release the juvenile Appalachian monkeyface. This site is located within a reach where the species was still reported alive about 20 years ago. “We’ve successfully put a dozen endangered species back into this one reach and they’re thriving and doing well, so we all agreed the best thing to do was to put them into the same site to ensure a second population,” he said. “They seem to have a pretty good survival rate from this size; the hard part was getting them to this point. I’m very hopeful that they’re going to do just fine, because they’re pretty thick-shelled and tough compared to some of the species we work with. It’s like putting oak trees out instead of poplar trees.” 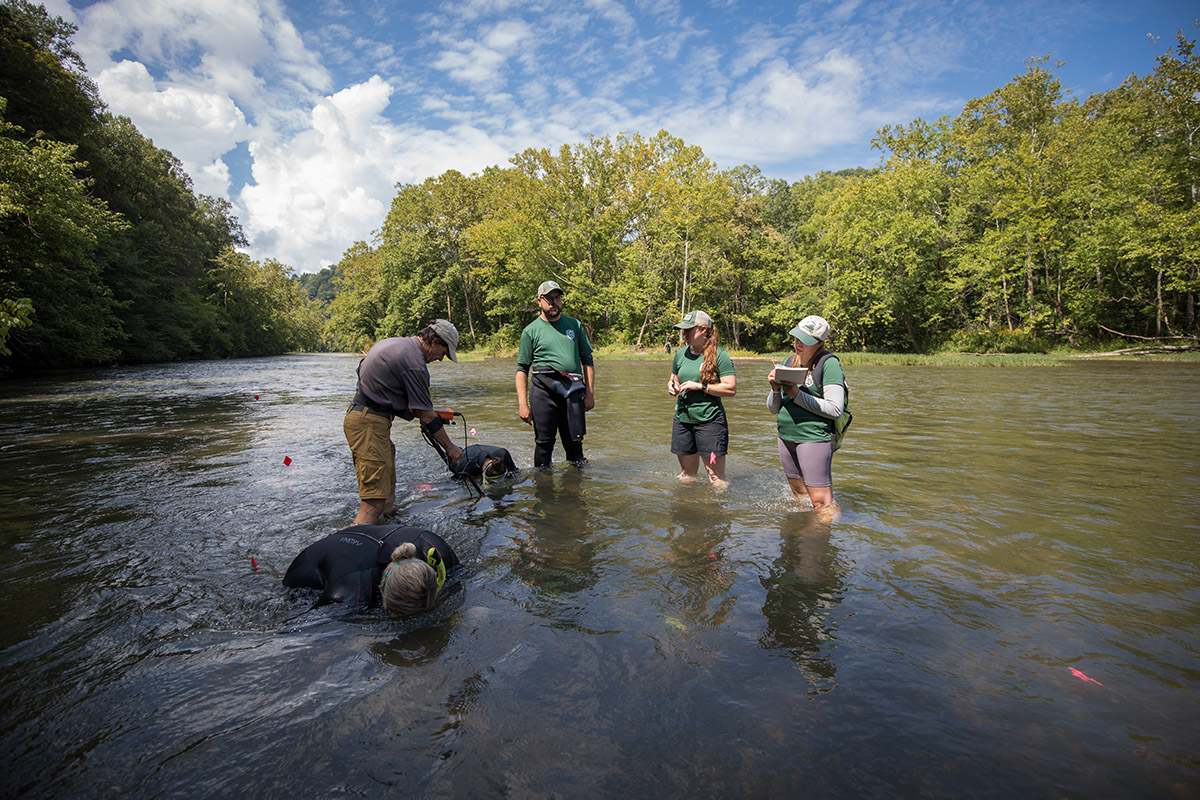 The AWCC staff and partners carefully chose the location for releasing the Appalachian monkeyface mussel individuals.

Lane is proud of what the team at AWCC has accomplished, but he acknowledges that they couldn’t have discovered the key to Appalachian monkeyface propagation without all the research that had been done before. “We’re standing on a lot of shoulders. Our predecessors put this facility together, and this species was always at the top of the list of ones everyone wanted to figure out and produce,” he said. “They tried year after year unsuccessfully, but they left a lot of great information behind for us to build on. We added our insights and experiences to what they discovered, and I think it really belongs to everybody who has ever worked on it.”

The release of the 125 juvenile Appalachian monkeyface mussels into the Clinch River is just the first step of recovering this endangered species into Virginia’s waters. The Appalachian monkeyface mussel takes a long time to mature. So it likely will be at least a decade before biologists hope to document wild juveniles of the species that can be traced back to this initial stocking effort.