Spring Turkey Hunting on Public Land: How to be Successful

Wild turkeys are undoubtedly one of the most challenging game species. They’re wary and heedful, making it difficult for a hunter to remain veiled. Hunting a spring gobbler doesn’t wholly depend on the equipment used to pursue them.

“Knowing where the turkeys are located is more important than having the best turkey call in your pocket,” says Gary Norman, DGIF wildlife biologist and Forest Game Bird Project Leader.

It’s important to scout an area right before the season starts. Scouting can set you up to being successful, especially during the early part of the season.

“Second is being patient with turkey hunting. Hunters are often anxious and move to another location if a gobbler isn’t responding,” says Norman, who encourages hunters to arrive to their hunting destination early (before other hunters), to have a higher chance of being successful on public land. 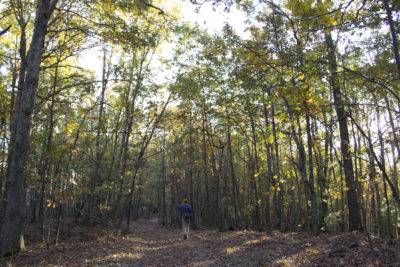 It’s important to scout an area before the season starts.

Norman says one of the best times to hunt the Virginia spring turkey season is the last week in April, which is the peak of hen incubation. When hens aren’t available to the gobblers, the gobblers respond to calls.

Is it Truly Possible to Bag a Bird on Public Land?

Despite the negative reputation that public hunting land often receives, success on public land does exist if you are committed.

“We have so much land and opportunity with great turkey in the state. With public lands, you just need to do your homework – it’s a gold mine for us! That’s the part people overlook,” says Hank Tassitano, an avid public land user.

Tassitano has been hunting public land in Virginia for nearly twenty years, tagging out on spring turkeys. He says that national forest opportunities are a treasure, but only with persistence.

“As soon as deer season ends, I’m in the woods. Looking for what I missed, turkey sign, or change in patterns of the game. You must do all these things when the woods are an open book. Get out and do it!”

Tassitano emphasizes that scouting and becoming familiar with the area that the birds are traveling prior to the season is vital for success. But, he says, trail cameras are valuable if time doesn’t permit.

“As a hunter, step back, look at what other hunters are doing and avoid them, because there’s plenty of room. Go way back up in there,” says Tassitano, who encourages hunters to go off-the-beaten-path in pursuit of gobblers. “There’s access points on public lands that are untouched. You’d be surprised.” 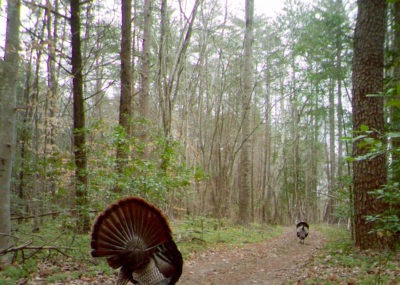 Old logging roads are among the primary areas that a gobbler will be found strutting.

On national forest, hunting hillsides, old logging roads, ridge points, or benches off a mountain side are the primary areas that a gobbler will be found strutting. The open range allows them to be seen by the hen while also protecting them from predators.

Tassitano says that his success rate for bagging a bird increased by nearly 75% when he began hunting from a pop-up blind on a hillside. Though tactics differ for every hunter, the blind is an advantage when it’s tough to flip around locations in steep terrain of public forest, or in light foliage (during the early part of the season).

Safety is the most important component when hunting on public land. Hunting is relatively safe when looking at it statistically, but the consequences are severe when someone is injured. David Dodson, Hunter Education Program Manager at VDGIF, explains how to minimize hunting-related accidents this season.

“One of the most important things is to sit and call the turkey to you instead of stalking the turkey,” says Dodson.

Hunting tactics are constantly dynamic, and new hunting techniques in pursuit of a bird should be performed with caution.

“Using turkey decoys of any kind, especially gobbler decoys, a hunter needs to be extremely careful and ensure you’re not in the line-of-fire to anyone shooting at the decoy,” says Dodson.

Dodson says if you see another hunter while hunting, remain still and call out, so the hunter doesn’t mistake you for a turkey.

“Make sure of your target and what’s behind it before shooting – that’s the number one rule for turkey season,” says Dodson.

Remember, if you are hunting spring turkey season in Virginia, a hunter must use #2 fine shot or smaller.