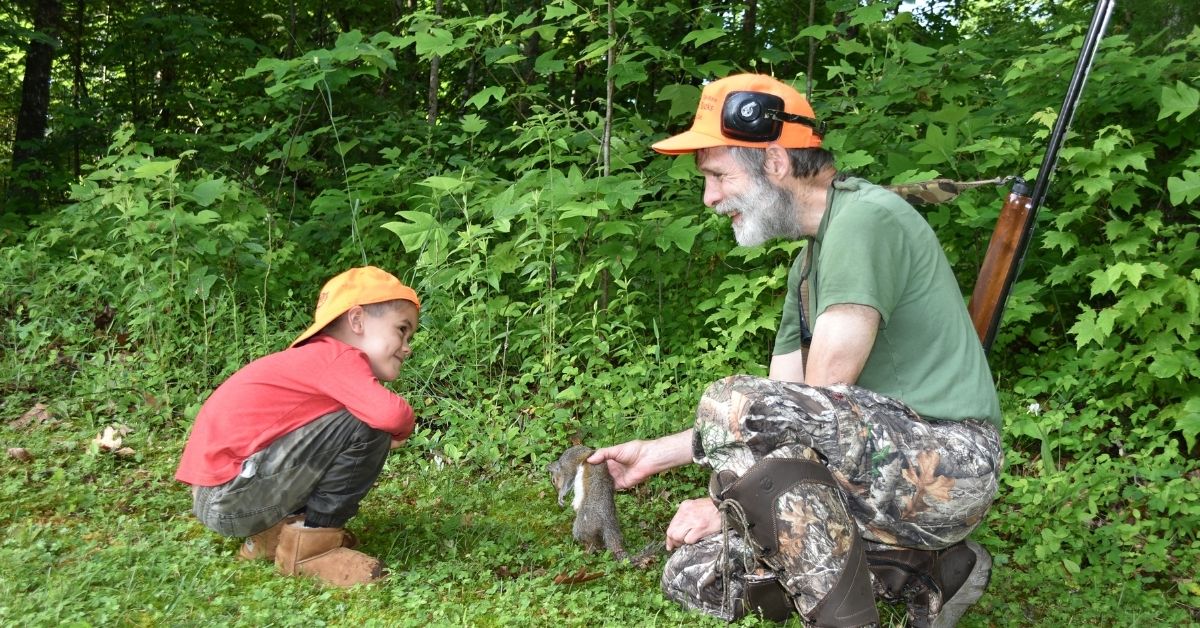 The author and his 6-year-old grandson had success while squirrel hunting on opening day last June.

The two-week June squirrel season (June 5-19 this year) has much to offer folks new to hunting and the outdoors says Marc Puckett, small game project leader for the Virginia Department of Wildlife Resources.

“June is a great time to take new hunters or youth hunters out hunting for squirrels,” Puckett says. “First, kids are out of school during June and are looking for outdoor activities. Some folks complain the June season is too hot, but if you watch the weather generally there are several very nice cool mornings during the season.

“Second, there are a lot of squirrels at this time of year. The young squirrels from the winter/spring breeding season are all out of the dens and looking for food. There is rarely another time during the year when squirrels are more abundant. Third, competition is light, there are very few hunters in the woods during this time period, meaning you may just have the woods to yourself.”

For me, opening day of last year’s spring squirrel season had already been a success, even though we hadn’t even seen a silvertail. My son-in-law David Reynolds and I were taking his boys, 8-year-old Sam and 6-year-old Eli, on the 38 Botetourt County acres the two families live on. At the beginning of our adventure, Sam announced that he wanted to go afield with me, while Eli opted to tag along with his dad.

So the two duos started from opposite ends of the property with the goal of meeting later in the morning. As Sam and I walked down a spur off the main trail, my grandson, as usual, asked numerous questions nonstop (with my answers in parentheses).

“Granddaddy, what’s the name of those berries? Can we pick them when they’re ripe? (Wild blueberries. Yes).

“What’s the name of that bird singing? What’s he saying? How many different birds have we heard now?” (Red-eyed vireo. He’s telling other male vireos to stay away from his territory. About 15).

“What’s the name of that mushroom? Can we eat it?” (Granddaddy will look it up in his mushroom book. Never pick or eat a wild mushroom unless your parents or I say you can).

Sam’s constant chatter probably had something to do with the fact that he and I hadn’t glimpsed any gray squirrels, but so what. He was enjoying the outdoors and learning about nature.

About a half hour into our excursion, David and I met along our property’s main trail and exchanged boys. David and Eli had seen several grays, but none had presented a shot. Eli is much more reserved than his older brother (which probably explains why Eli and his Dad had spotted several squirrels) and likes to quietly experience things. With those characteristics in mind, I decided to do some plant identification with him as we rambled along our seeded logging road.

I had him pick first spicebush then mountain mint leaves, tear them in two, and next asked him what they smelled and looked like. Eli was able to note the spicy smell of the former and the minty odor of the latter and before we had finished walking the trail, he could identify the flora by both their smell and appearance. 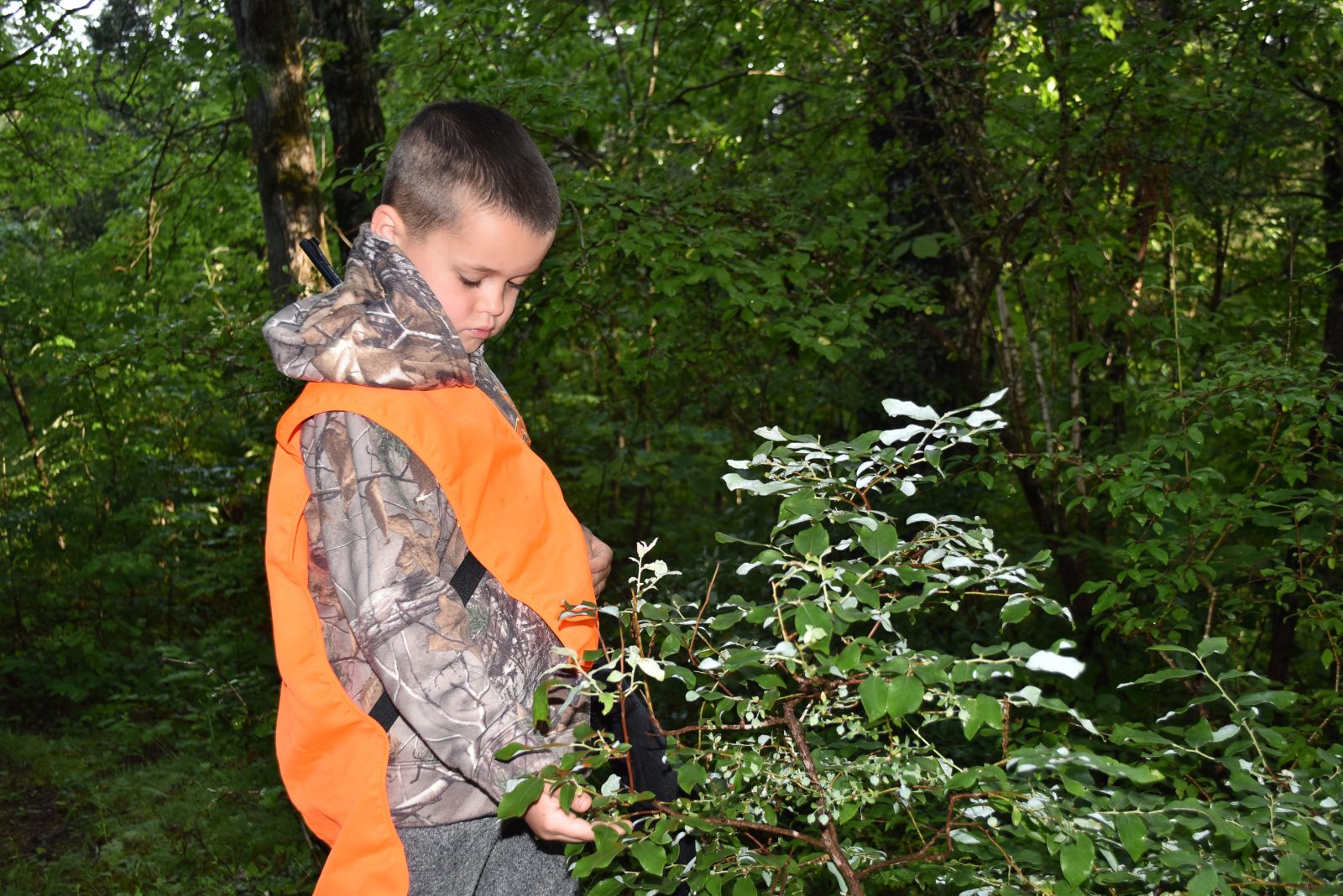 One of the lessons that can be taught to kids during the June squirrel season is how to identify and the importance of native foods. Here, Sam looks over a wild blueberry bush.

Beforehand, David and I had agreed that given the boys’ attention spans and the increasing heat of mid-morning, we would limit the hunt to about an hour. Just as Eli and I were nearing David and my daughter Sarah’s house, I saw a gray squirrel leaping from one tree limb to another. Mounting my 20 gauge autoloader, I was able to drop the bushytail. Eli and I were thrilled with our success and I promised him that e-mama (the boys’ name for my wife Elaine) would have him and his brother over for a squirrel dinner soon. All in all, the morning had been awesome.

One of the keys to finding success with squirrels in June is knowing what squirrels eat then.

“Mulberries are a favorite, and in some places the June season is referred to as the mulberry squirrel season because these fruits tend to ripen then,” Puckett says. “Mulberry occurs in every county in Virginia, but is not overly abundant anywhere. Mulberry trees like rich, moist soils in river and stream bottoms.”

In short, continues the biologist, if you find mulberries you’ll likely find squirrels in June. He adds that blackberries may be ripe in some places by mid-June, and much of a squirrel’s late spring diet consists of flowers, buds, and developing seeds of ash, sweetgum, maple and elms. Squirrels will generally still be found in all the places they frequent in fall and winter; they just may be using slightly different trees for foods.

Sam wanted to carry a loaded BB gun on our outing to perhaps target shoot some, as he and David had been practicing shooting. But as were preparing to leave their house, Sam looked down the barrel and asked if it were loaded. “You know better than that,” said David. He then unloaded the gun and told his son that he could carry his possession but it would now be unloaded. David also quickly reviewed gun safety rules. This anecdote leads to several questions regarding how old a young person should before the individual can carry a gun and what type of gun is the best choice then?

David L. Dodson, the department’s Hunter Education Program Manager, weighs in. “Parents are best able to determine when a child is ready to handle firearms responsibly,” he says. “The earliest a child can legally hunt alone is age 12, after having passed the Hunter Education course. Until age 12, a child may hunt when supervised by a licensed adult.”

Puckett offers his thoughts on what is the best gun for a young or apprentice squirrel hunter. “I personally think a nice 20 gauge shotgun with a modified choke is a good first choice,” he says. “It is highly effective, and its kick is still manageable. You want to set up a new hunter for success, and a good 20 gauge will do it. I personally like over and under, or side by sides, or even a nice single shot best, because of the added safety factor of being able to carry the gun with the breech open.

“But for brand new hunters using pump or automatic shotguns, I suggest at first limiting them to one shell in the gun at a time until they have proven beyond doubt their safe gun handling ability. Sometimes in the excitement of a kill, new hunters may forget they have a second shell in the breech ready to fire.” 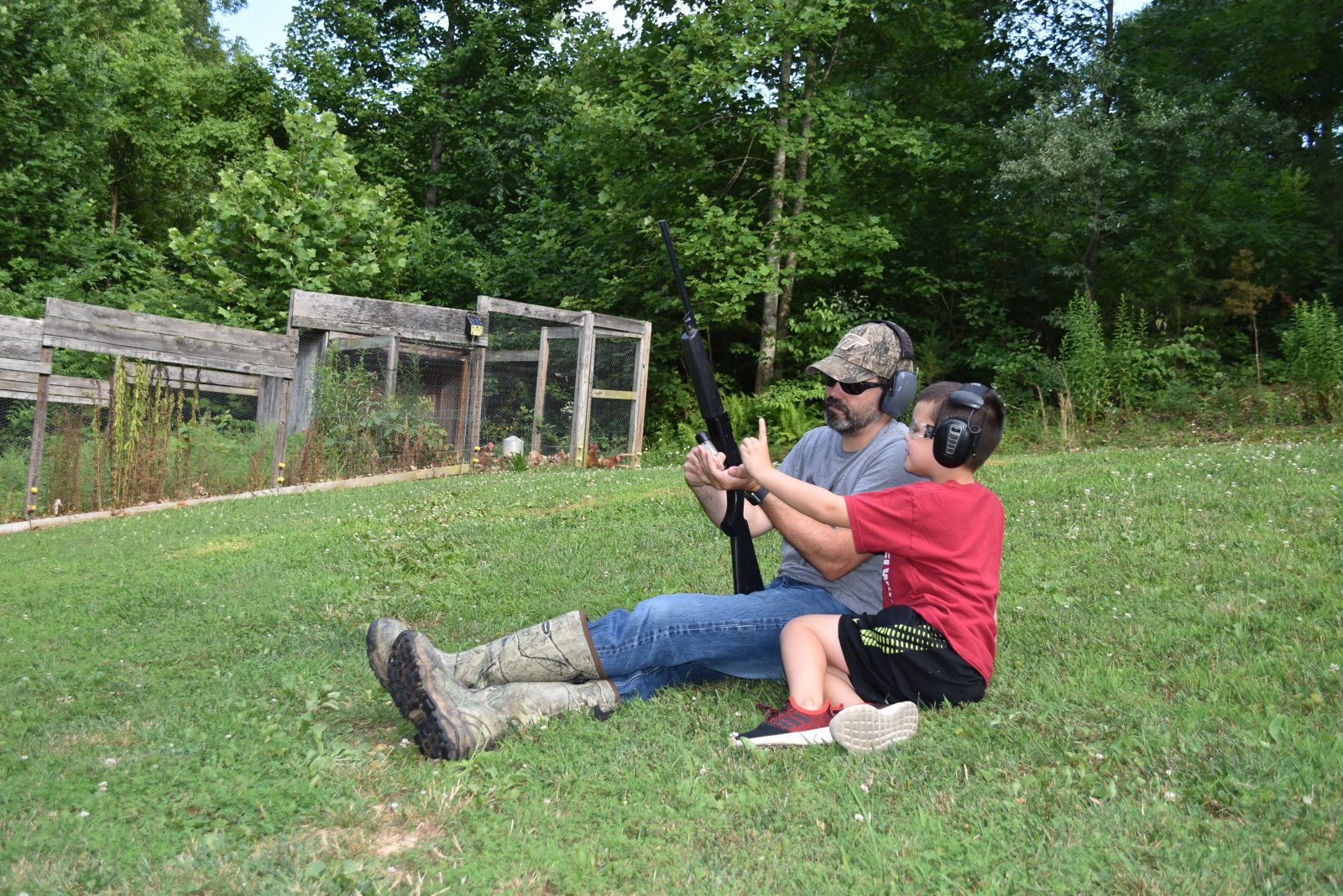 David Reynolds reviews gun safety issues with his 8-year-old son Sam before the youngster practices shooting his BB gun. For young kids, it may be better to start their shooting careers with the low recoil BB gun.

Dodson says that his personal choice would be to wait until a child is big enough to be comfortable with a youth-size 20 gauge shotgun, especially if he or she will be hunting alone. Most children are able to handle these shotguns by the time they are 12, have completed hunter education, and are legally allowed to hunt on their own. A 28 gauge is also worth consideration, he adds, but shells tend to be more expensive.

Suggestions for a Successful Outing

It’s a grand time to enjoy Virginia’s outdoors, and the outdoors are better together, so consider taking a kid or a novice adult squirrel hunting this June!