The First Two Weeks of November and the Bucks are on the Move: Part 2 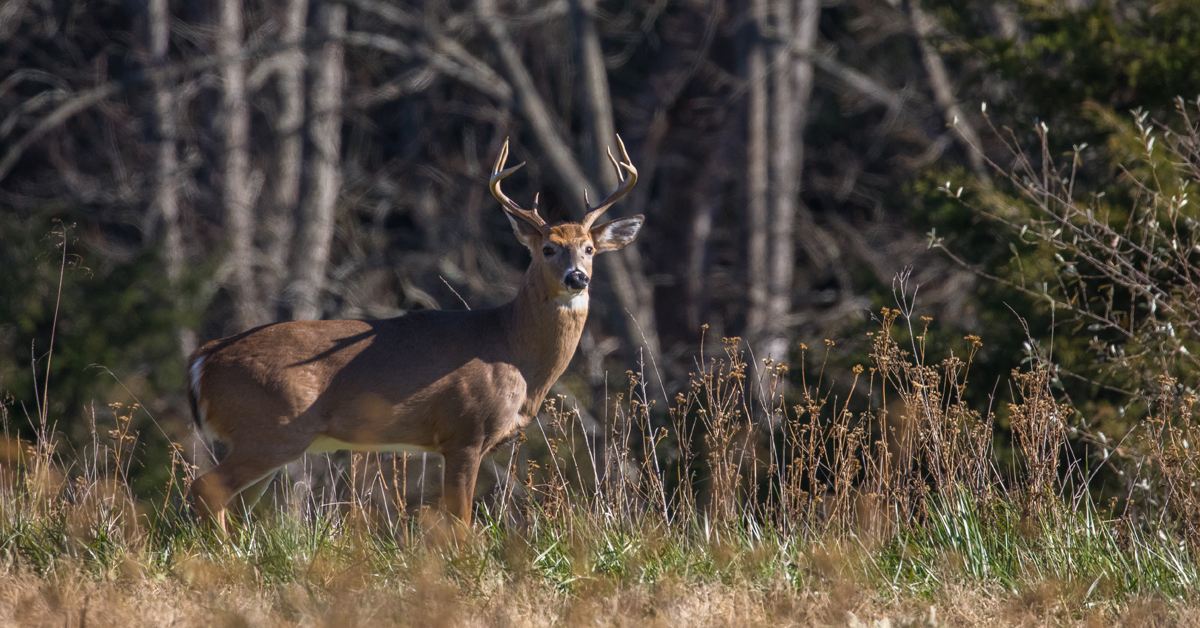 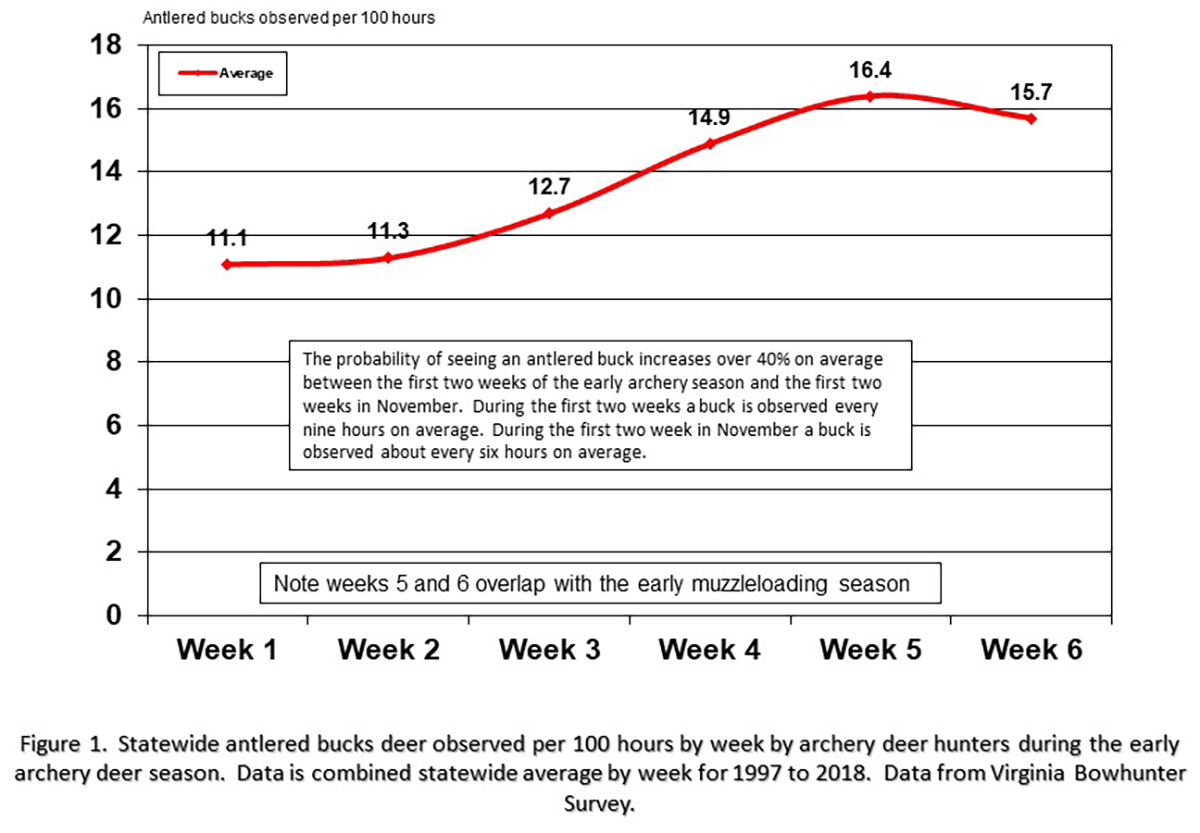 Hopefully we made it clear that the best opportunity to see a buck in Virginia is during the first two weeks of November, but are your best chances of harvesting a buck or a mature buck highest during that same time period?

In this second article, we will look at total buck harvest and the pattern of harvesting mature bucks (age 3 ½ and older) over the entire three-month deer season to see if it is influenced by the changing buck visibility pattern that increases over October and peaks in mid-November.

For the most part, deer seasons in Virginia and most other eastern states are set to start on a specific weekend day, like a Saturday in or around mid-November, rather than a specific calendar date like November 15. Virginia’s opening day of firearms season was historically the third Monday in November. In fall 2003, it was changed to the Saturday prior to the third Monday in November. Because of this, the actual calendar dates for season openers can vary over seven different calendar days from year to year. For example, over the 17-year period 2003-2019, the opening date of the early muzzleloading deer season ranged from October 30 to November 5, and the opening date of the firearms deer season varied from November 13 to November 19.

Shown in Figure 2 is the cumulative antlered buck harvest from fall 2003 through fall 2019 by calendar day (over 1.6 million bucks). Each orange bar on this graph combines the buck harvest on that particular day from the past 17 years and the black line is the seven-day floating average, which smooths out the daily variation and shows the trend (the red bar is November 15th). It looks a lot like a normal bell curve with a peak at or just after mid-November, but several interesting deer hunting and deer biology factors are at play. 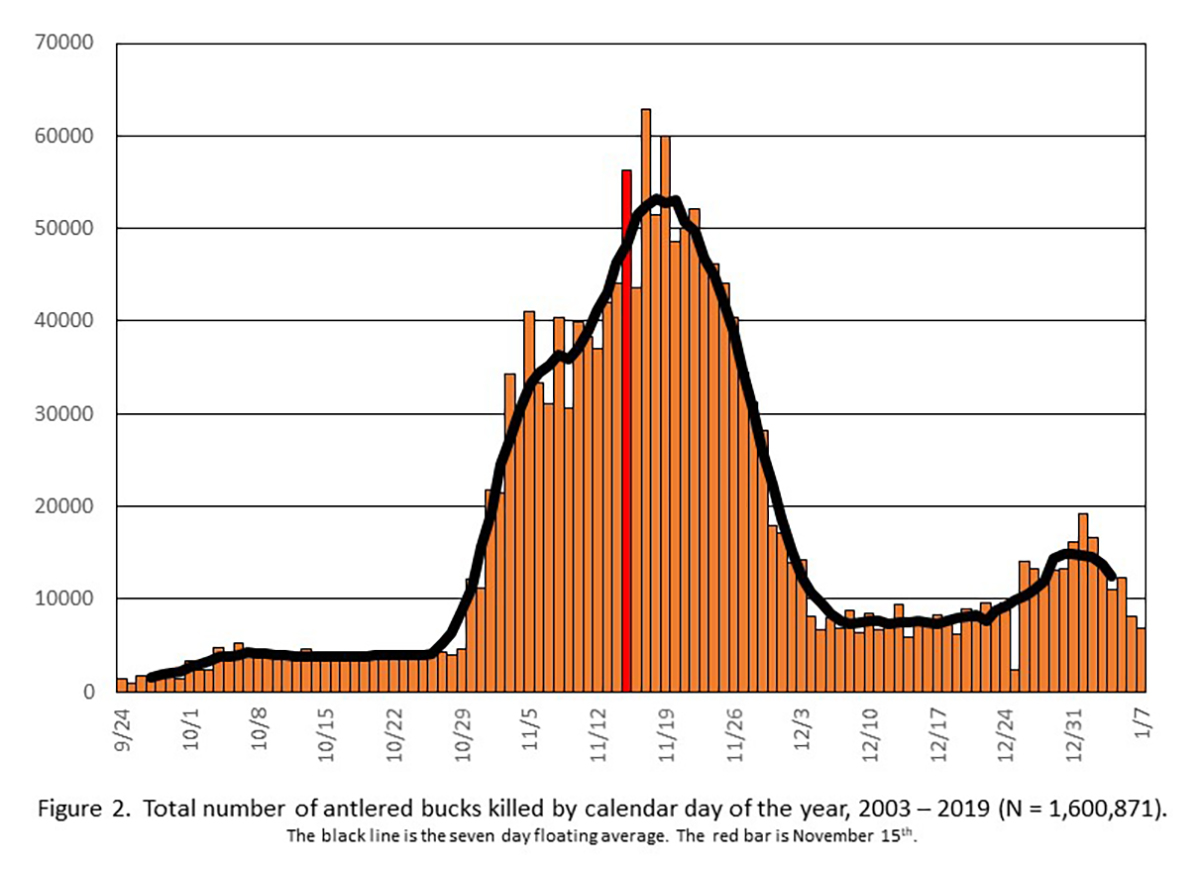 First, the buck harvest over the normal 28-day early archery deer season is very stable. It does not change appreciably over time, but from Figure 1 we know that the buck visibility increases significantly and steadily over the month of October. The bottom line is that archery deer hunters are seeing more buck activity as October progresses, but they do not necessarily harvest more bucks as that activity increases. That dynamic changes significantly with the start of the early muzzleloading deer season. Not surprisingly, the antlered buck harvest jumps dramatically with the initiation of the early muzzleloading deer season (opening dates: October 30 to November 5). The modern muzzleloader is a much more lethal weapon than archery equipment, and deer observability and activity is peaking.

Second, the most interesting part about the buck harvest trend line during the two-week early muzzleloading deer season is that it goes up over time in spite of the fact that hunting pressure is likely fairly stable (over this two-week time frame). Most importantly, bucks are steadily being removed from the deer population in large numbers. This increasing buck harvest trend can be attributed to the rut. It’s early November and bucks are on the move.

Third, all things come together at the end of the muzzleloading deer season and during the first week of the firearms deer season at or just after mid-November. This is when deer activity and hunter pressure peak at the same time. Bucks are on the move and being harvested.

Buck harvest begins to decline dramatically during the second week of the firearms deer season. This is probably due to two factors. First, many of the bucks in the deer population have now been removed by deer hunters. Recall from Part 1, in any given year, Virginia deer hunters typically harvest about 50 percent of the standing crop of bucks in the deer herd in a given deer season. Second, the rut is dying down and deer activity is declining.

Two last features of the buck harvest graph deserve comment. First, over 17 consecutive years in any given deer season one day stands out—Christmas. It is obvious that most deer hunters take Christmas Day off from deer hunting. Second, there is an appreciable increase in the buck harvest near the end of the deer season. This is probably due to increased hunting pressure and less selectivity by deer hunters as the deer hunting season clock is expiring. The drop-off at the very end is probably an artifact of the annual variation in the actual Gregorian calendar day for the end of the season (e.g., varies from January 1 to January 7).

Note that the antlered buck bag limits and the season dates have not changed significantly since fall 2003 when deer seasons were changed from opening on Monday to opening on Saturday. The only substantial change since that time was the addition of Sunday hunting on private lands in fall 2014 and the addition of Sunday hunting on some public lands this year.

The buck harvest by day trends in Figure 2 are mostly intuitive, but not all bucks are created equal. Nearly all deer hunters know it is harder to harvest older, mature bucks.  After all, they don’t get to be old by walking around in front of deer hunters. If your deer management goal is to increase antler size, you need to consider allowing bucks to grow older.

Antler characteristics are influenced by three factors: age, nutrition, and genetics. Of those three, age is the easiest to “manipulate.” Many of you probably already practice Quality Deer Management (QDM)—passing up yearling bucks in favor of older age classes. If you allow a buck to age from 1 to 2 years old, you can increase his average antler size over 90 percent. By passing him up another year, antler size is improved by another 20 percent.

Figure 3 shows the percent of bucks harvested by day that are greater than or equal to 3½ years of age (GE3). This data comes from the department’s Deer Management Assistance Program (DMAP). Implemented in 1988, DMAP is a site-specific deer management program that increases a landowner’s or hunt club’s management options by allowing a more liberal harvest of antlerless deer than could be obtained under the current system of county either-sex deer hunting day regulations. DMAP cooperators submit the jaws of all harvested deer for aging and collect other valuable biological data for the Department. Please note that this DMAP data has a strong QDM bias. On average about 85 percent or more of DMAP cooperators practice some form of QDM. This results in an older buck age structure. Data shown in Figure 3 is based on more than 32,000 GE3 bucks and 105,000 total bucks over 17 deer seasons. 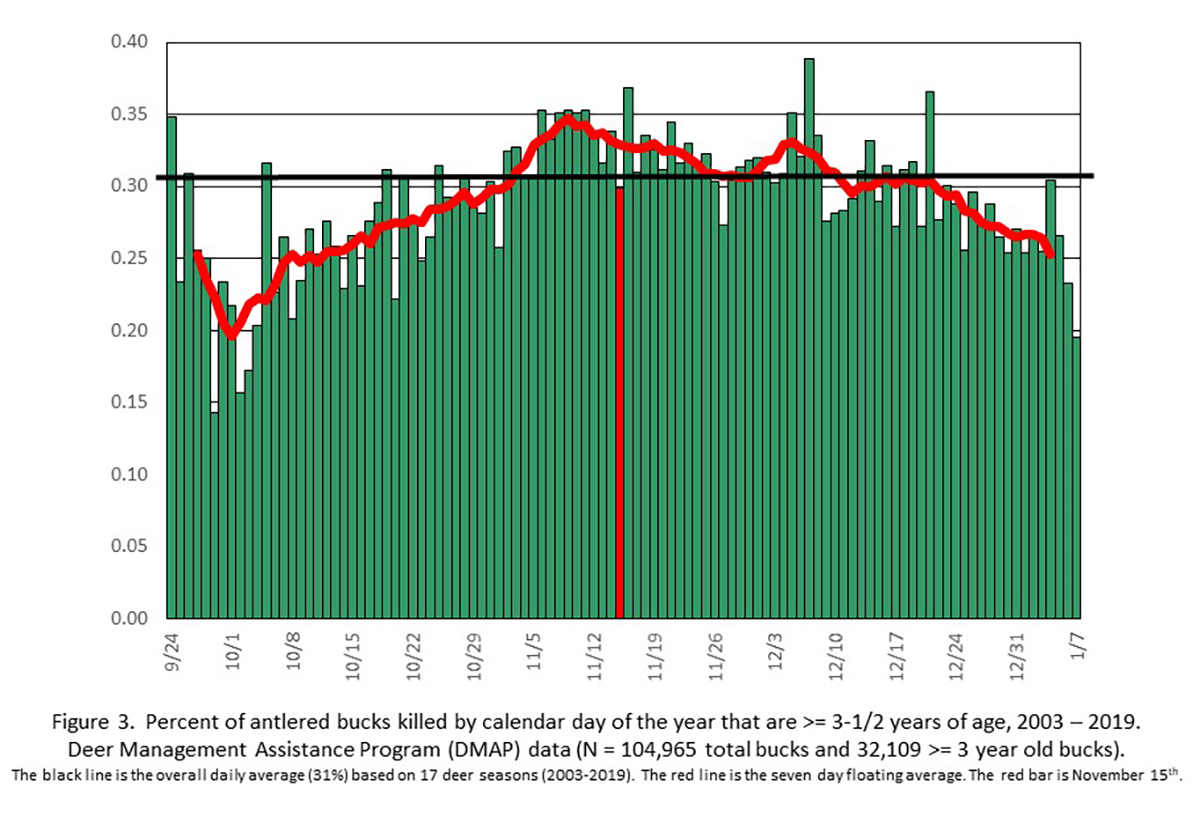 The green bars in Figure 3 are the percent GE3 bucks harvested by day (the red bar is November 15). The black horizontal bar is the overall daily average based on 17 deer seasons (2003-2019), and the red line is the seven-day floating average (again, this smooths out the daily variation and shows the trend). Several factors related to the GE3 trend deserve comment. First, overall and on average, 31 percent (or nearly one in three) of the bucks harvested by DMAP cooperators on any given day over the past 17 years were GE3. However, this percentage varies significantly by the week of the deer season.

Second, a fair number of GE3 bucks are taken during the youth weekend. This makes sense because the bucks are caught by surprise in late September and it is a modern firearm season. It is a very short-lived GE3 bump.

The apparent vulnerability of GE3 bucks changes dramatically from the start of the early archery deer season (where it is well below average) to a peak about 40 days later just prior to and around mid-November. At the start of the archery season, 20 percent (or one in five) bucks harvested by DMAP cooperators are GE3. By November 9, it is 35 percent (or one in three). Note how steadily the trend increased over the first seven weeks of deer season.

Around November 4, the percent of GE3 bucks harvested exceeds the 17-year daily average and stays above it for the next 20 consecutive days. Generally speaking, this would overlap the two weeks of the early muzzleloading deer season and the first week of the firearms deer season and, therefore, peak rut activity. Lastly, there is a minor second peak in early December (the second rut?) after which the chance of harvesting a GE3 buck falls slowly but steadily.

In conclusion, all three factors evaluated in this two part series (buck visibility, buck harvest by calendar day, and older buck vulnerability) all point to the same conclusion. While you can harvest a mature buck at any point during the three-month deer season, the best time to deer hunt in Virginia is during the first three weeks of November because bucks are on the move and your chances of harvesting a bigger older buck are highest.