The First Two Weeks of November and the Bucks are on the Move: Part 1 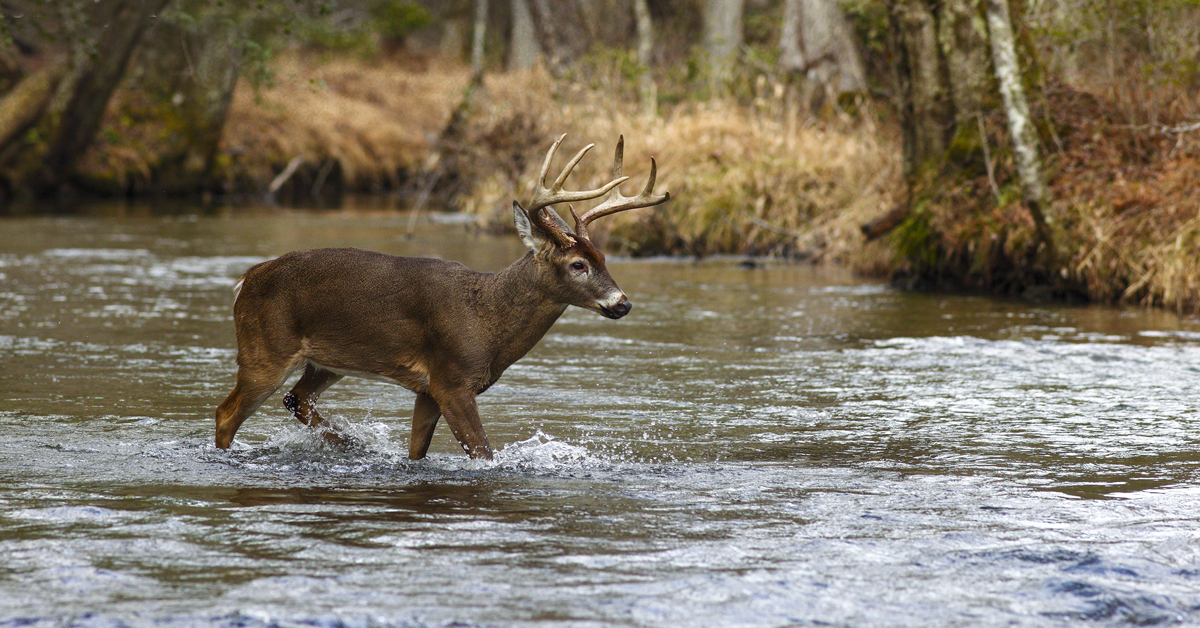 When the rut starts taking sharp mature bucks have been known to travel well outside of their home range. Resident bucks that hunters have been following with summer trail camera pictures are often shot by adjoining landowners. Photo by Ryan Yoder

Good news for Virginia deer hunters. First, Virginia’s deer hunter success rate (defined as those licensed deer hunters who kill at least one deer each fall) is at least 60 percent according to recent hunter surveys and among the highest in the United States. Second, Virginia Department of Wildlife Resources (DWR) data indicate that Virginia’s male deer age structure has been getting older for decades, and this trend is expected to continue. This means that Virginia deer hunters have high success rates and their chance of killing a bigger and older buck is getting better.

Virginia is unique in the mid-Atlantic. As a general rule, it has long and liberal deer seasons. So, with three months to deer hunt, when is the best time to kill a buck? Simple, it is the first two (or three weeks) of November.

Since 1996, DWR has conducted an annual bow hunter survey (BHS). Cooperating archery hunters are asked to report the number of certain types of wildlife they see and the number of hours spent afield during each hunting day. Other information collected includes the county of hunt, land type (public or private), weather characteristics, and mast (acorn) abundance. Annual, weekly, and regional indices are calculated based on animal observations per 100 hours of hunting effort. The BHS data represents one of the most important deer management datasets the Department has for monitoring deer populations on a regional basis. 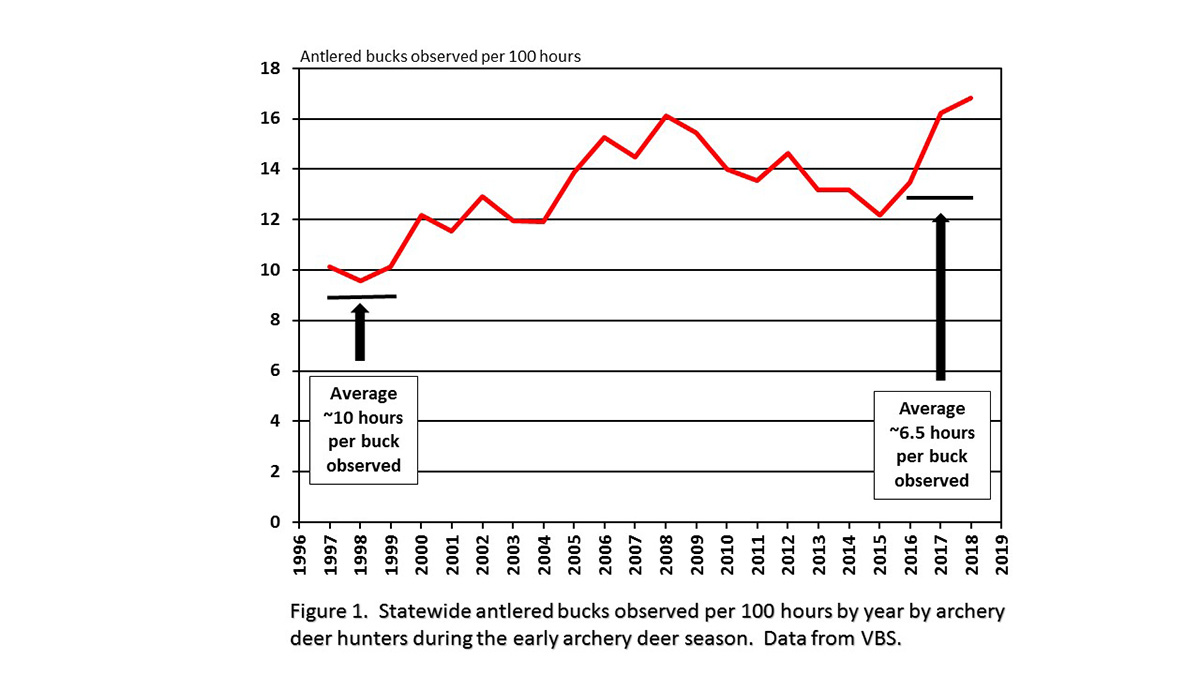 The first two factors are likely due to a reduced number of deer hunters afield or, more importantly, the deer management approach called Quality Deer Management (QDM). Under QDM, deer hunters routinely pass up young, small antlered bucks, letting them survive into older age classes. Data from Virginia’s 2013 hunter survey indicated that 68 percent of Virginia’s deer hunters had intentionally passed up a legal, ethical shot at a small antlered buck during the 2013 season. Twenty-four percent had passed up four or more legal bucks. Voluntary QDM has had a major effect on private land deer management in Virginia over the past 20-30 years, and this effect is expected to continue. One caveat is the potential spread of Chronic Wasting Disease (CWD) in Virginia; older bucks present a greater risk of spreading the disease, so deer hunters and managers may have to adapt to this new reality in Virginia’s existing CWD area in northwest Virginia. 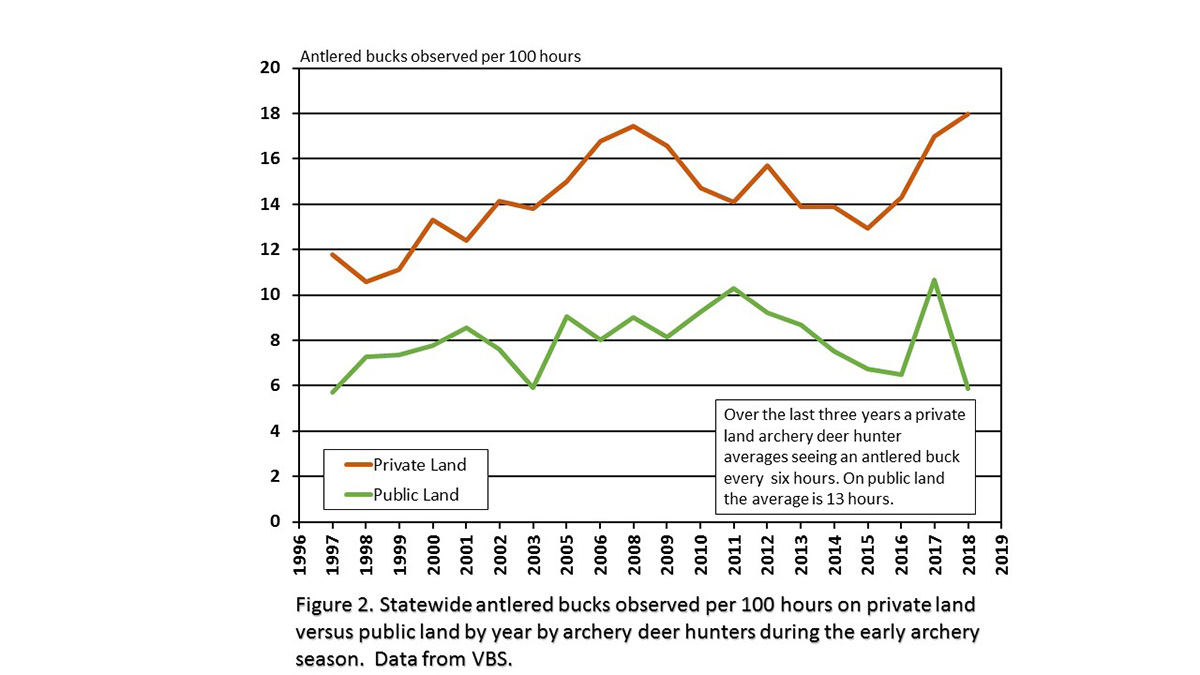 It will not come as a surprise to Virginia public land archery deer hunters, especially those in western Virginia, that buck observation rates on public land in Virginia are much lower than on private land (see Figure 2). Over the past 10 years, a public land archer sees a buck about every 13 hours on average. Conversely, a private land archer sees a buck every seven hours. The low public land buck observation rate probably exists on a continuum and gets worse as one moves east to west due to differences in deer habitat quality. In eastern Virginia, the public military areas (A.P. Hill, Pickett, and Quantico) and most DWR Wildlife Management Areas (WMAs) carry very respectable deer populations. The same cannot be said for the public lands in mountainous western Virginia.

Now for the secret in the BHS buck observation data. Nearly all the prior data has been based on a six-week average buck observation rate. The BHS runs from the first Saturday in October through the first two weeks of November, which in Virginia is overlapped by the early muzzleloading deer season. The first two weeks of November, and probably the third, are key if you are a deer hunter who wants to see and kill a buck. The secret—buck visibility—is not flat over these six weeks, but changes noticeably, increasing steadily over time and peaking during the last two weeks (see Figure 3).

What causes this buck visibility pattern over October and the first two weeks of November? Simple, the rut. The peak of the rut and breeding in Virginia is, as a general rule, in mid-November and just a little earlier as you move east and a little later as you move west. As the rut builds through late October and the first two weeks of November, bucks are steadily increasing their movements in search of does coming into estrus. This increases a hunter’s chances of seeing and killing a buck. Due to these increased activity levels, mature bucks have been documented to lose 20 percent or more of their body weight during the rut. 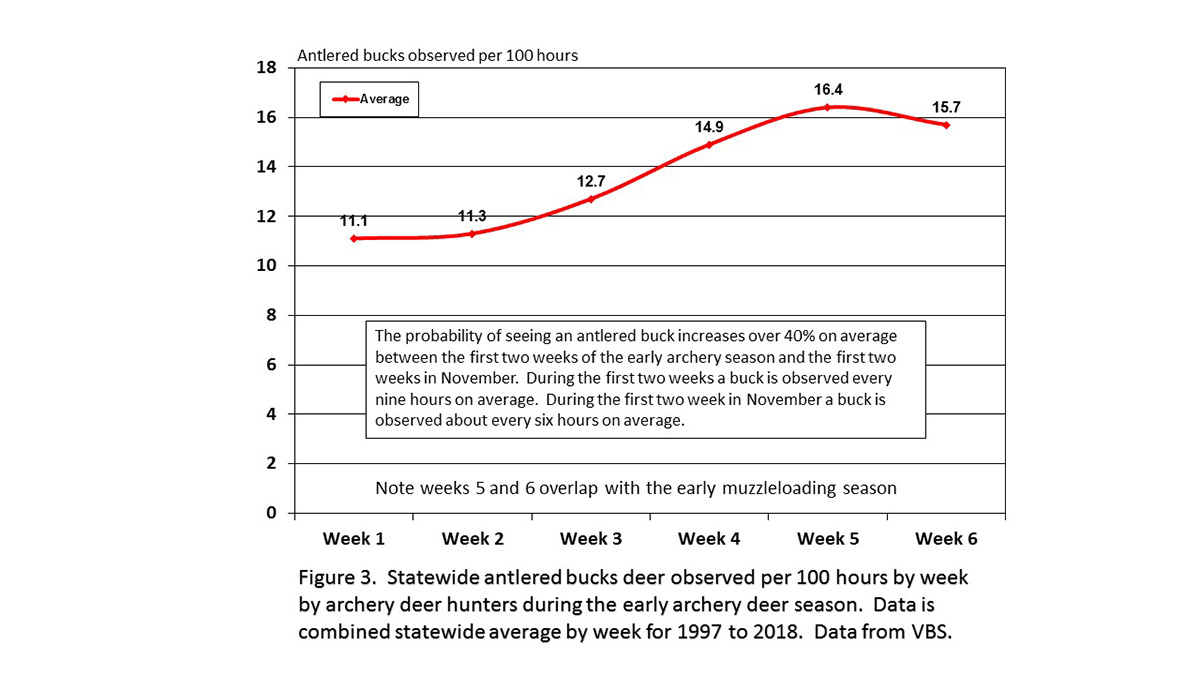 The trend seen in Figure 3 is particularly interesting when you consider that more and more bucks are being seen while bucks are steadily being removed from the deer herd by archery and muzzleloading deer hunters. Over the last decade, Virginia deer hunters on average kill approximately 97,000 bucks annually, and this number has been fairly stable. Figure 3 demonstrates that buck visibility is still high at the end of the early muzzleloading deer season (mid-November) in spite of the fact that, on average, 41 percent of the annual buck harvest has already been removed from the population by archery and muzzleloading deer hunters.

The BHS does not provide any indication of buck visibility when gun season opens. Common sense would say that bucks remain highly visible, as deer do not quit moving overnight in mid-November. But common sense would also say that buck visibility will decline quickly and significantly in late November. First, it is on the back side of the peak rut. Most importantly, when firearms deer season begins in mid-November, an army of gun deer hunters (between 200,000 – 250,000) hit the deer woods with much more lethal weapons and the deer kill increases dramatically.

Note that the percentages listed above represent the average annual buck harvest totals and not the total number of bucks on the landscape. According to the Department’s data and a computer reconstruction model, Virginia deer hunters routinely remove just under 40 percent of the standing buck population in a typical deer season. This means that, coming into a normal deer season, there are approximately 250,000 bucks on the landscape and about 60 percent will survive deer season.

The Internet credits Zig Ziglar with the quote: Success occurs when opportunity meets preparation. In Virginia, the opportunity to see and kill a buck peaks in the first few weeks of November.

In Part 2 next month, we will look at the pattern of harvesting mature bucks (age 3½ and older) over the entire three-month deer season to see if it is influenced by this changing BHS movement/visibility pattern that peaks in mid-November.