The Most Important Week of a Fawn’s Life 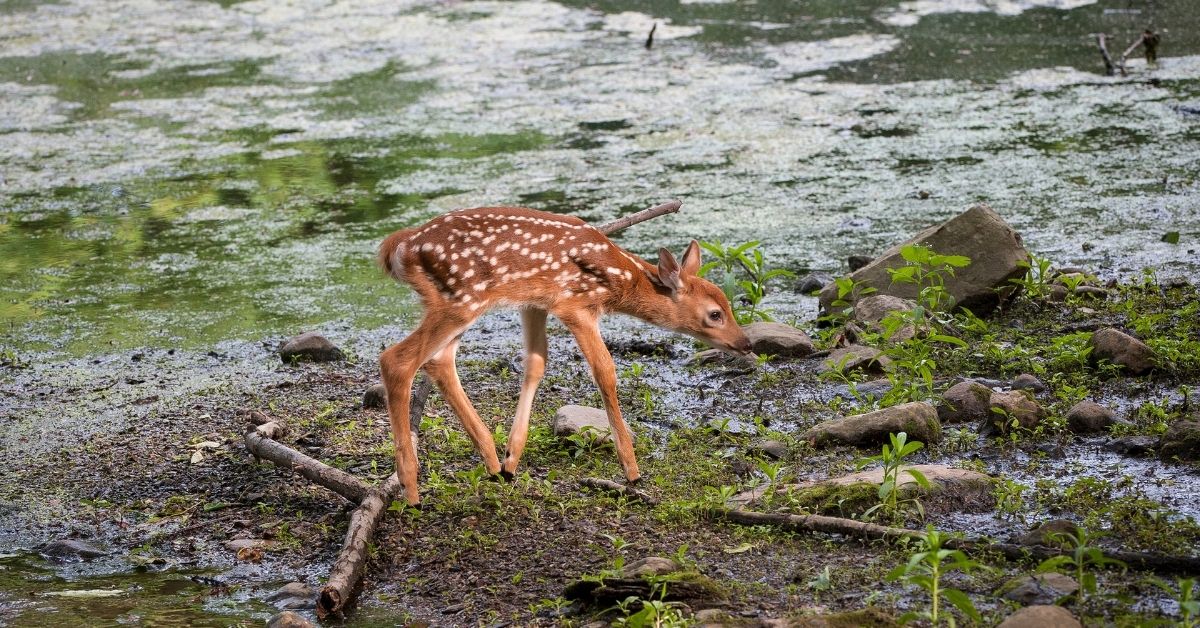 This young fawn is pictured walking back to a small island located off the main shore of our author’s pond. Several times daily the fawn would walk back to the island that was its bedding area.

The concept of having 60 seconds to the minute, 60 minutes to the hour, and 24 hours to a day was first put forward by the Babylonian mathematicians who derived that basic foundation on works by the Sumerians 3,500 years before the birth of Christ. People in different parts of the world use different calculations, but internationally we all use the ancient formulation because nothing works better or more accurately.

I claim that the 168 hours, or 7 days, in which the white-tailed deer fawns are born is the most important week of their lives. For most of the fawns born in Virginia the birthing week will be somewhere in the last week of May or the first week of June. There are many other factors that determine the exact timing of birth, but they will be born at that time when most of the vegetation is at its nutritious peak.

This week is for the benefit of the fawns about to be born, but it is the week of the greatest confusion for the doe’s last-year fawns. White-tailed deer are small herd creatures, maternally family related. In order for her newly born fawns not to become attracted to any other deer except herself, the doe has to leave her grouping and seek out and defend a maternal birth area. This means that the yearlings who had been given all the opportunities that the newborn fawns are about to receive have to be driven off, as the newborn fawns will follow anything that moves as soon as they are able.

To the yearlings this shuttering is shattering, because for the prior year they were constant shadows of their mother. They went where she went, ate what she ate, did whatever she did. Now, they are suddenly driven away with flailing hooves if they are reluctant to go. Almost all female yearlings will stay in the general area in which they were raised and will rejoin their mother’s group when she does. Most of the little bucks will leave the area entirely to seek out entry into an adult buck herd and to stay with any group they can get to accept them. Yearling bucks that remain in their maternal herd will be driven from that area by the females in September or October.

Adult does usually give birth to twins, the pair being born within an hour of the start of her parturition. The doe lies down until the fawn is partially extruded from her body and then stands up so the fawn’s weight helps to pull it from her body. While waiting for the second fawn to be born the doe vigorously licks the first fawn, and as soon as the second is born she immediately licks both of them to clear them of all blood and vaginal fluids. By doing so she is also greatly reducing any odor that is emanating from the fawns.

Within the hour the fawns have gained control of their legs and are able to stand, and she leads them away from the birthing area. The fawns are led to different locations separated by hundreds of feet, thus insuring that any predator that finds one fawn may not find the second. The doe will then leave the immediate area but remain close enough so that she can lead any danger away from the fawns. 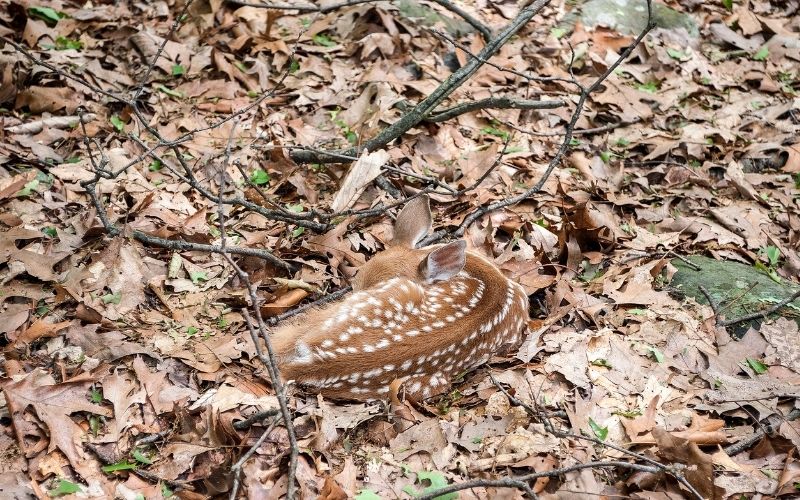 The young white-tailed fawn depends on its camouflage coat to hide from view. During its first five days, a fawn that thinks it has been discovered by any creature usually drops its head flat to the ground.

The doe always remains in the general vicinity of her fawns but comes back no more than four or five times a day to nurse them. While nursing a fawn, the doe constantly licks up any excrement or urine that the fawn discharges. It is for this reason the newborn fawns are almost odorless for their first couple of weeks. The doe selects the general area in which each fawn is left to rest but it is the fawn that picks the precise spot in which it lies. Consequently, when the doe comes back to nurse the fawn it may not be in the exact spot where she left it, so she calls to it with a low murmuring call. At any time the fawn hears its mother or another deer approaching the area it will not get up to go to her until it is called. 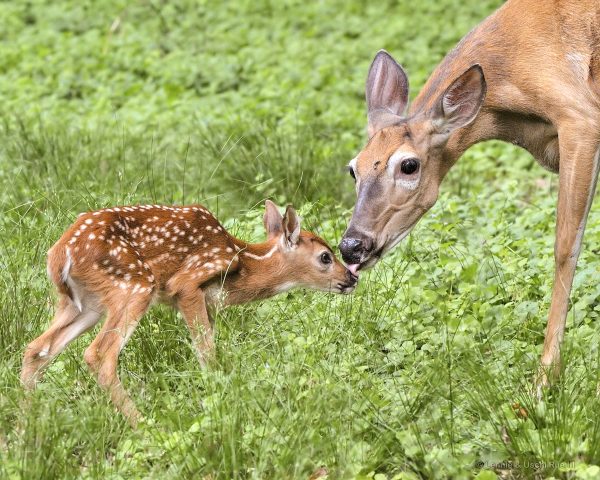 This doe is greeting her young fawn before nursing. The doe will always remain within the general vicinity of her fawns but comes back intermittently to nurse them.

My home research fenced-in area contains a 3/4-acre pond with a small island near the end, perhaps 50 feet from the main shore with shallow water separating the island.

On several occasions one of the three-day old fawns would walk out to the island and select that area to be its bedding area. That always amazed me when it happened as the fawn had no prior experience with water at all as it was nursing and not yet drinking.

During its first five days, a fawn that thinks it has been discovered by any creature usually drops its head flat to the ground and flattens its ears. Biologists have found that during the period in which the hiding fawn feels threatened it will even suspend its breathing for several minutes. A fact that everyone should be aware of is that no matter what any creature does to minimize its external body odor, including humans, we are going to give off body odor every time we exhale a lungful of air as we breathe. If we stop breathing entirely, we will soon smell even worse.

This takes place during the fawn’s first four days of life. From the fifth day most fawns are capable of springing to their feet and dashing off, able to outrun most men. That would get them away from some predators but not all of them. Despite having acquired this speed the fawns will still not follow and accompany their mother until they are about three weeks old. Thereafter they are her constant companion, although they will spend a great deal of time running and dashing about with their peer group after she returns to her maternal herd. All the vigorous playing is the training and body building needed for their survival.

Dr. Leonard Lee Rue III is considered to be a foremost authority on whitetail deer in the country. Rue’s 31 books and more than 1,400 magazine articles and columns about whitetails are regarded by many wildlife enthusiasts as their reference library. Rue’s website is www.ruewildlifephotos.com.