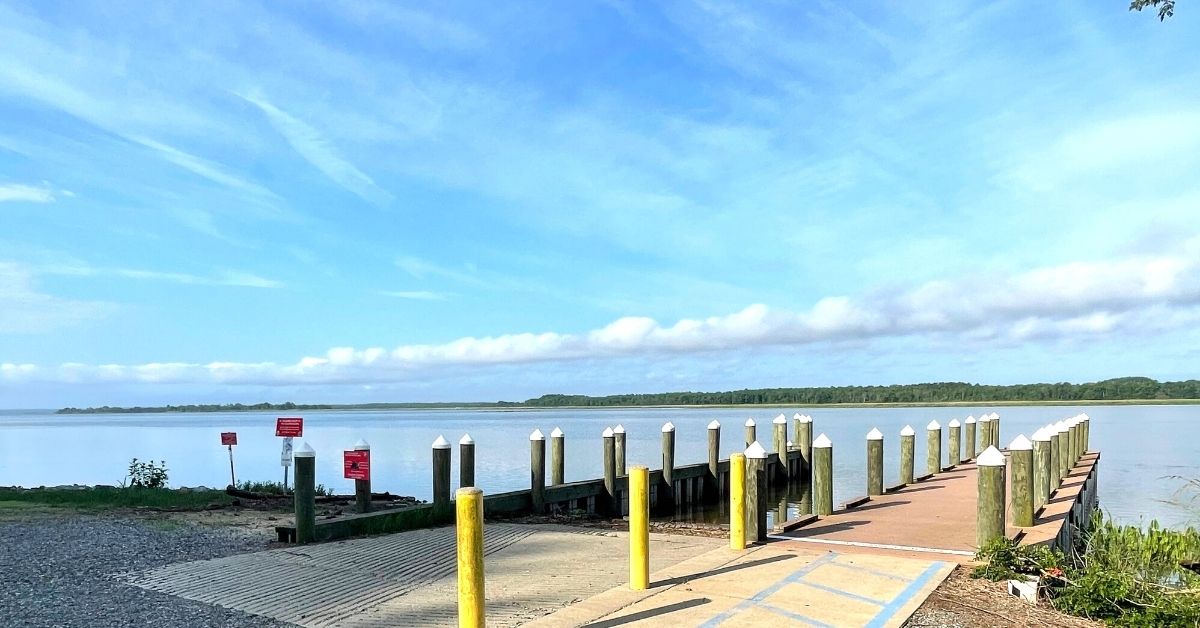 The DWR boating access site at Carter's Wharf on the Rappahannock River.

The Rappahannock River at Carter’s Wharf is spectacular, even if you don’t bring a boat. Just driving in on Carter’s Wharf Road is dramatic, as it dives down a steep ravine to the water. Park, get out, look around, and you’ll realize that you’re in the middle of Fones Cliffs, a soaring series of 100-foot-high bluffs that the Rappahannock has carved as its flow accelerates along the outside of a four-mile-long curve in its channel, about halfway between Tappahannock and Port Royal. 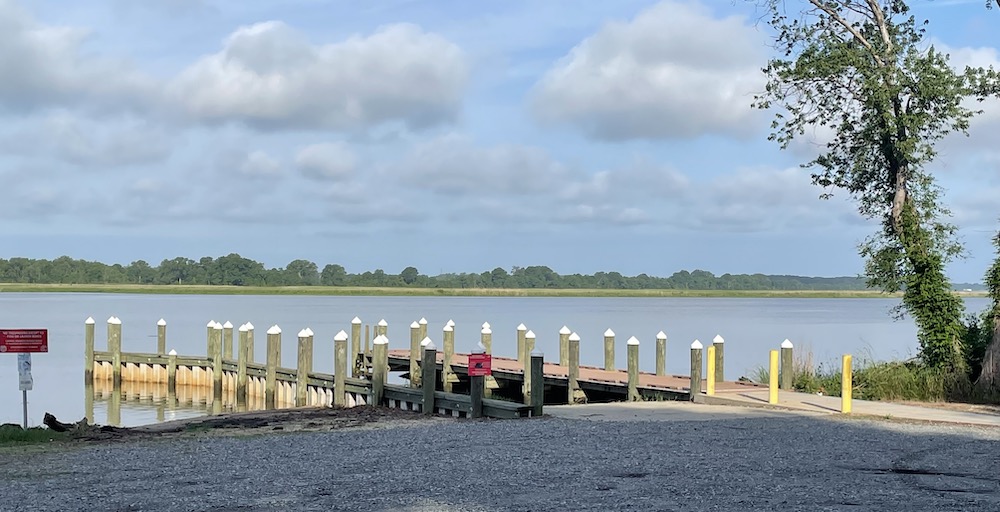 This bend in the Rappahannock is one in a series of meander curves. Remember that rainwater from a large swath of Central Virginia, including the eastern slopes of the Blue Ridge, flows through this relatively narrow slot. Thus, the powerful current has carved a channel 40′ to 50′ deep.

The cliffs are made of sandstone, especially a type called diatomite made up of quadrillions of tiny, geometrically intricate silica cases laid down millions of years ago by a group of tiny algae called diatoms. The trees along the cliffs’ edges serve as spectacular look-out perches for one of the largest concentrations of bald eagles on the Atlantic coast. There, the big birds can scout for prey that ranges from the river’s abundant gizzard (mud) shad to waterfowl. 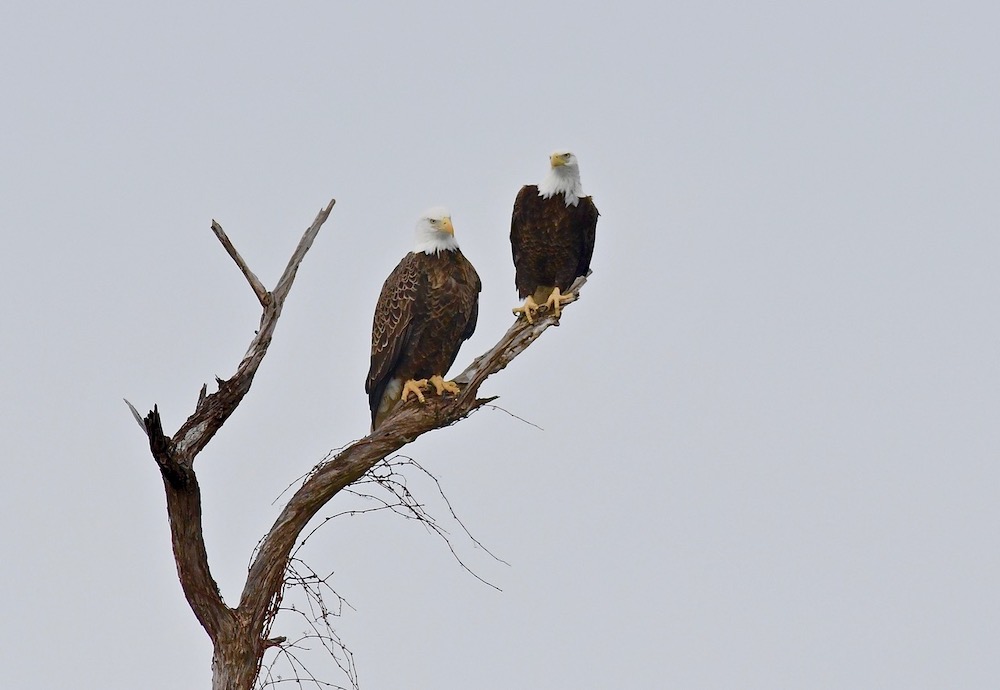 Meanwhile, the ravines that cut through the cliffs at intervals (including the one beside Carter’s Wharf Road) serve the eagles for nesting and nighttime roosting. Numerous resident mature birds nest here, but this area also draws dozens of transient immature eagles (less than 4 years old) who come in summer from rivers to the south and in winter from waters to the north.

One section of Fones Cliffs is now part of the Rappahannock River Valley National Wildlife Refuge, and another parcel belongs to the Rappahannock Tribe. The area is also an important segment of the 1,800-mile-long Captain John Smith Chesapeake National Historic Trail.

Opposite the cliffs is the Beverly Marsh, a haven for wildlife built on rich sediment deposited over many years as the river’s flow slows down on the inside of the curve. Although the outer edge of the marsh grows grasses that indicate brackish waters, the inner marsh, influenced more by rainfall, is tidal fresh. In warm weather, its creeks are full of small fish, which draw water birds like great blue herons and bitterns, while in cold weather, the seeds from its plants attract migratory waterfowl. The combination of marsh and woods at the back edge make ideal habitat for muskrats, river otters, whitetail deer, and even bobcats. This marsh was one of the first areas along the river preserved by conservation easement, a long-term gift to us, the public, from its owners. 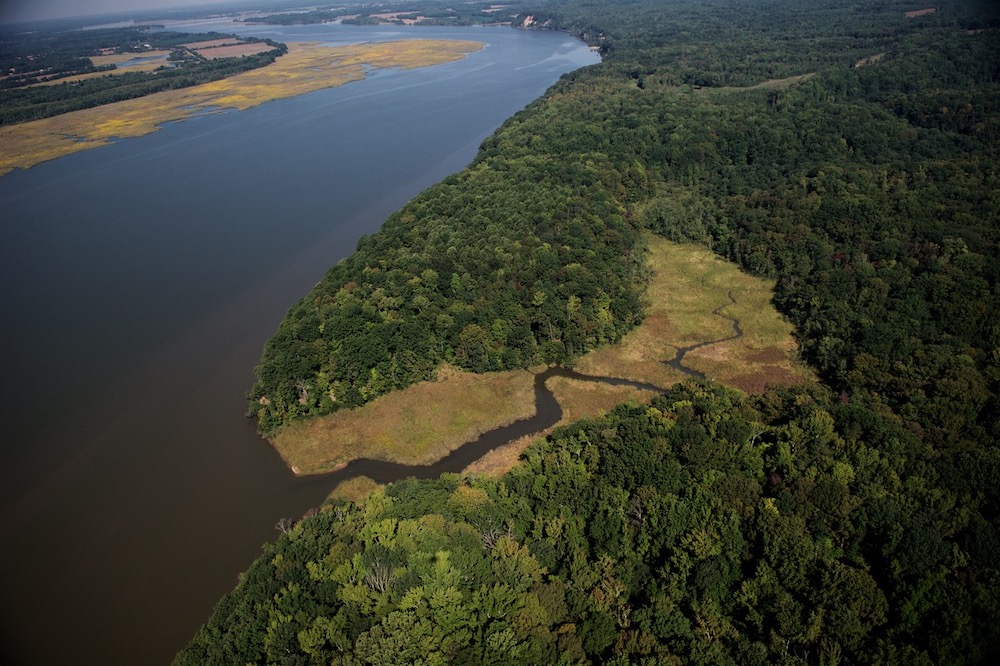 There is plenty for a visitor with binoculars to see from the dock and parking area at Carter’s Wharf, but launching a boat offers even more. Any kayak, canoe, stand-up paddleboard, rowing craft, or outboard skiff can be useful here, but be aware that this part of the Rappahannock can be deceptively powerful. Flood and ebb currents here peak at 1-2 knots, strong enough to challenge even experienced paddlers. Moreover, the narrow river tends to funnel wind, magnifying its effect on waves, especially when the current opposes it. In short, this reach of the river can turn surprisingly choppy.

That said, with prudent operation, boats up to 20′ can show you fascinating details of this part of the Rappahannock. Cruising the cliffs will reveal sections of shoreline where creeks drain the cliff’s ravines, as well as provide spectacular views of eagles overhead. If your boat has a fishfinder, you’ll see how the currents have shaped the channels, and you’ll see fish ranging from the ubiquitous mud shad that serves as forage to predators like blue catfish (some very large), rockfish (striped bass), white perch, and even occasionally, small red drum. See more at the DWR page for the Rappahannock.

Though they have little interest in the mud shad, this section of river serves as a transit area for a few 5- to 8-foot-long Atlantic sturgeon that make their way upstream each fall to spawn in fresher waters just below Fredericksburg. One or two turn up each year in the pound nets of watermen who target the river’s tasty but overly abundant blue cats. Like the bald eagles, waterfowl, and furbearers, these iconic fish add an air of mystery and wildness to the Rappahannock.

With all of these resources, it’s no surprise that this river has proven valuable to humans for centuries. Although formal archaeology is just beginning here, we know that Fones Cliffs was sacred ground for the Rappahannock Tribe, with three villages along the heights when Captain John Smith and his crew came exploring up the river in August 1608. They appear on Capt. Smith’s remarkably accurate 1612 map as Wecuppom, Matchopeak, and Pisacack. Consider what this area offered to them.

First off, Fones Cliffs provided long, strategic views both up and down the Rappahannock, to see what friend or foe might be coming by. In fact, Rappahannock archers from the villages ambushed Smith by firing arrows at his 30′ discovery barge as his crew rowed upstream, forcing him to steer closer to the Beverly Marsh, where another group of warriors had hidden to set up a crossfire. As Smith recounted the tale of the ambush in Book 3 of his “Generall Historie,” he had expected an attack, so his crew had prepared the boat with shields that turned the arrows effectively. 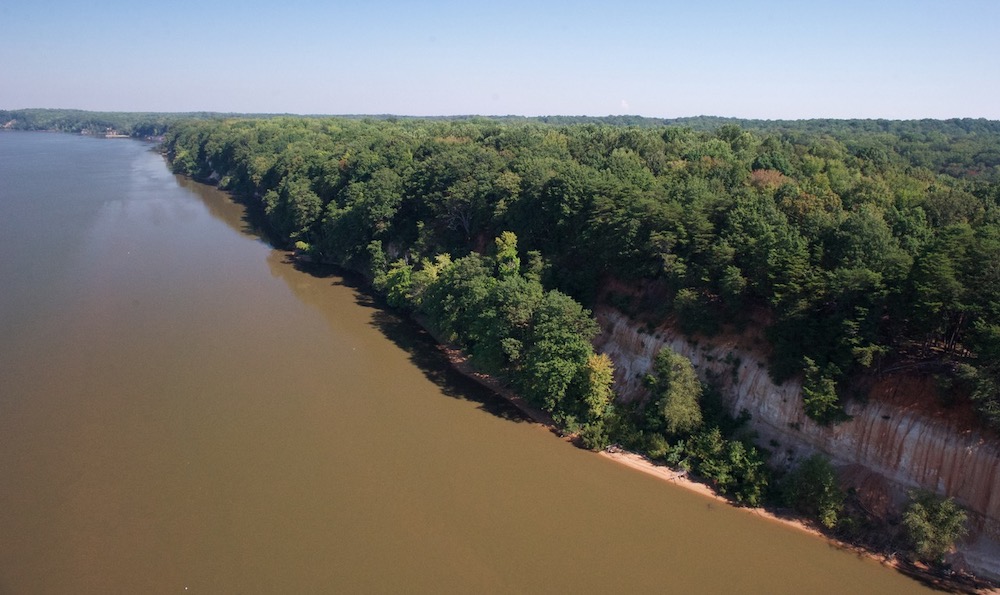 The explorers continued up the river, while the Rappahannock warriors jeered at them for apparently retreating. There’s more to the story, but what’s interesting is that you can travel that “battlefield” by boat today, 413 years later, and see exactly how it went down, with the river and its banks looking much the way they did then.

What else did the Carter’s Wharf area offer? For the Rappahannock people, the land behind the cliffs provided woodlands for hunting deer and turkeys, timber for canoes and longhouses, and soils for growing squash, corn, and beans. The ravines furnished paths down to the river, plus freshwater springs. The Beverly Marsh, just a short paddle across the river, supplied furbearers and birds to trap, plus edible plants, while the river gave the people fish.

By the end of the 17th century, the English had pushed the Rappahannock people out of the area and established plantations for growing tobacco (a less-than-pretty story, unfortunately). From then on, landings like the one at Fones Cliffs became important for shipping both tobacco to England and local crops to larger towns. In the 19th century, Chesapeake steamboats began linking communities along the Rappahannock with Norfolk and Baltimore. Carter’s Wharf became one of the stops on the way up to Fredericksburg.

After the steamboats stopped running in the 20th century, it remained public access, eventually becoming a launch ramp managed by the Department of Wildlife Resources. Today, it provides a valuable gateway to this part of the Rappahannock for local people who fish from shore or launch their boats, commercial fishermen, birders, visitors interested in history, Chesapeake scientists, and anyone else who loves exploring the Bay’s big rivers as Capt. Smith did. Go see for yourself!