The Virginia Appalachian Deer Study: How Fawns are Faring West of the Blue Ridge Mountains 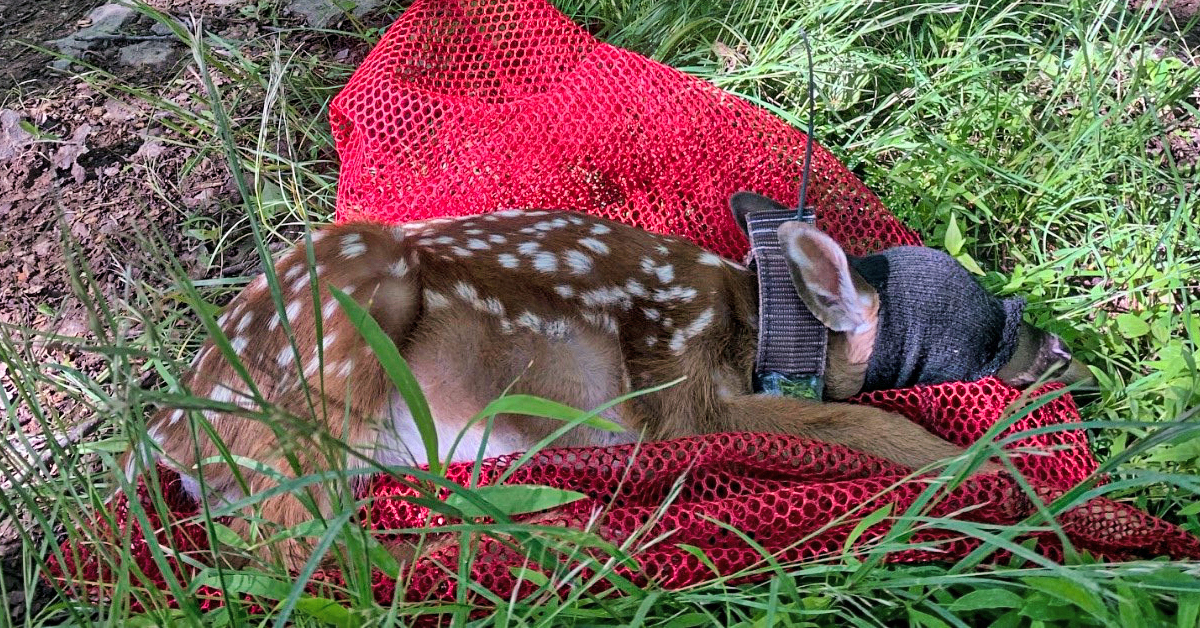 Understanding white-tailed deer population dynamics is essential for managers. Whether populations are thought to be overabundant or declining in number based on commonly collected data (e.g., hunter harvest or herd health data), it’s important for wildlife managers to develop methods to monitor survival rates and variations in cause-specific mortality to understand drivers or limiting factors of the populations in question. For whitetails, these vital rates are of great importance at early life stages when deer are most susceptible to mortality, whether that be from predation, disease, starvation, or a mixture of causes.

While adult doe survival is often most important, previous research suggests that fawn survival can still be a major factor in predicting trends in population growth. Hence, research is warranted to assess the effect of these fluctuations. Researchers at Virginia Tech have been doing just that over the last three years in Bath County, Virginia, where deer herds have demonstrated declines (particularly on public lands) over the last 20 years based on reported harvests. Funded by the Virginia Department of Wildlife Resources (DWR) through the Federal Wildlife and Sportfish Restoration program, researchers with the Virginia Appalachian Deer Study (VADS) have been hard at work analyzing data collected from the project and have started to uncover some interesting findings.

The three sites provided researchers with a diverse mix of habitat types and landscape variables to incorporate into survival analyses, with many areas actively managed using prescribed fire and various timber management regimes. To address survival and cause-specific mortality rates, the VADS team captured and equipped deer with GPS tacking collars to monitor them. While bucks and juvenile does were quickly ear tagged and released, adult does were primarily targeted. Special tracking devices known as vaginal implant transmitters (or VITs) were strategically implanted into pregnant females, which allowed researchers to capture and collar fawns during the summer. The VITs were programmed to give off a unique radio signal (like what the tracking collars emit when a deer had died) which alerted research personnel that the transmitter had been expelled from the doe. Once an expulsion signal was detected, crews then attempted to capture the fawns from the expulsion site. Special “event timers” transmitted the signal in code, which allowed researchers to decipher (within 30 minutes of the drop) when the transmitter had discharged from the animal (i.e., when the fawns were born). 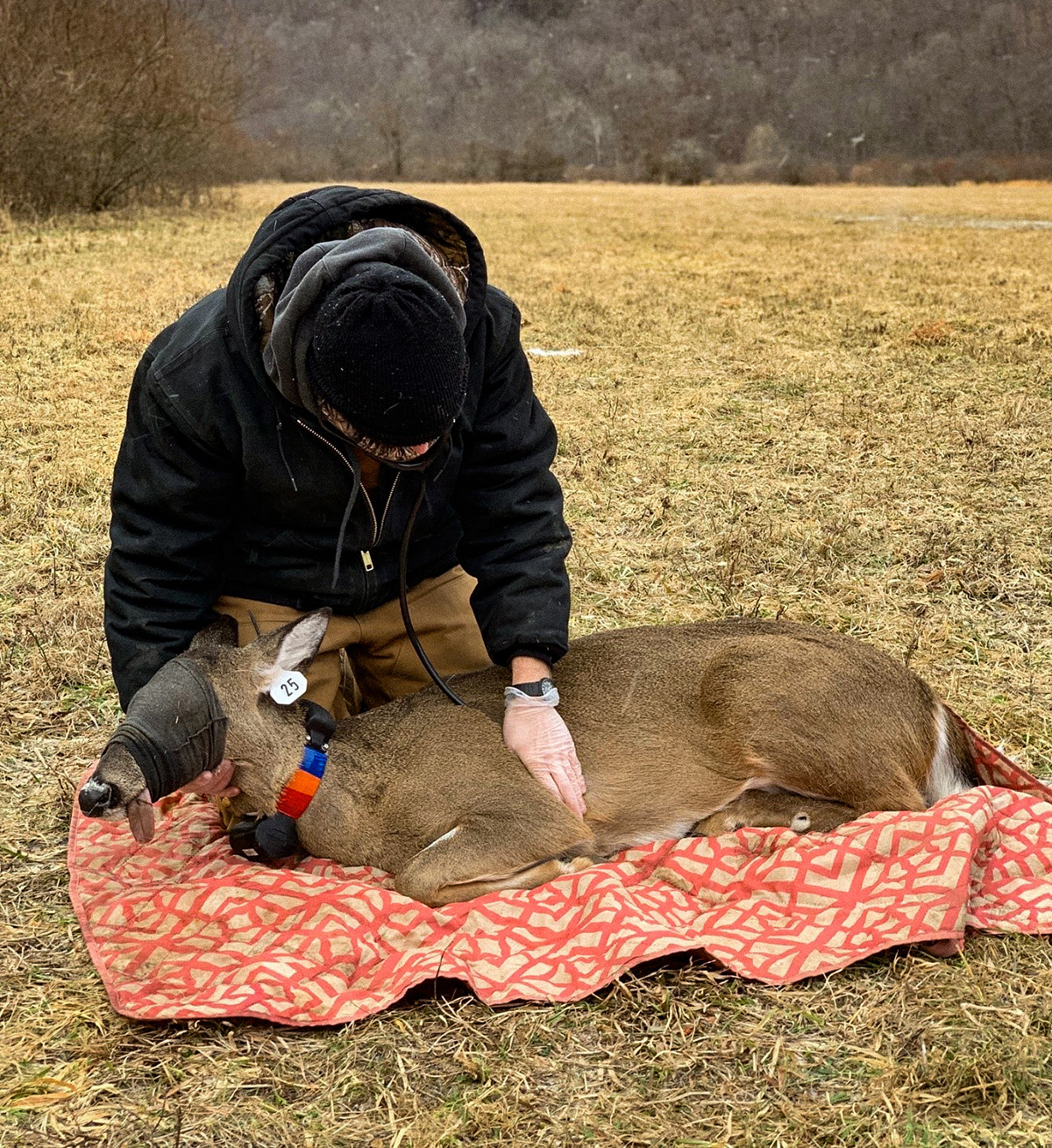 Braiden Quinlan measures heart rate of a sedated doe prior to her release. All collared does were also equipped with a vaginal implant transmitter (VITs) to aid researchers in finding fawns during the summer.

After installing collars on fawns, survival was determined by manually checking collared fawns at least three times per day (once every eight hours) for the first four weeks of life and at least once a day until 12 weeks of life. Using tracking collars specifically designed for fawns, which degrade and fall off the animal over time, the team was able to quickly investigate mortalities to better determine the actual cause of death. If the cause of death was suspected to be from predation, personnel examined kill sites for characteristics associated with different predators and attempted to obtain predator-specific genetics data by way of saliva left on the remains of the carcass, strands of hair, and/or fecal matter. 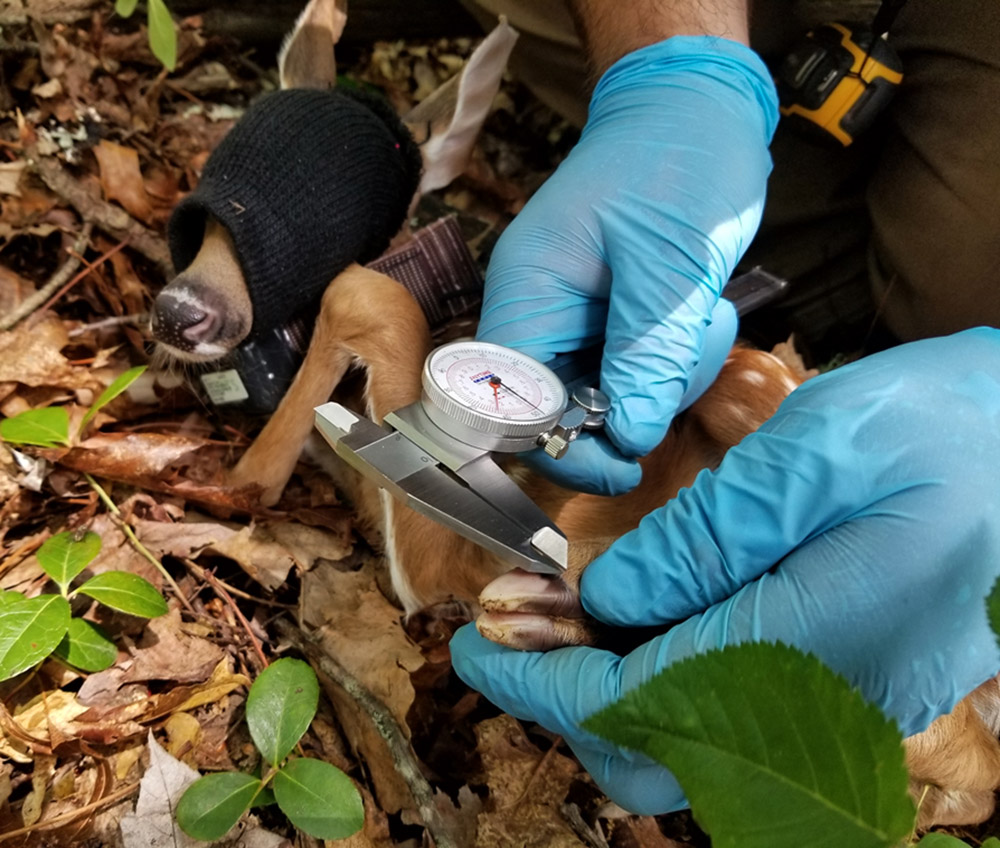 Furthermore, due to the high resolution of locations obtained from the collared does (satellite fixes obtained every hour), the team was able to better understand how deer were moving and selecting habitats before, during, and after the fawning season. In areas with active habitat management practices (e.g. prescribed fire, timber management), previous research suggests that does will often select habitats having less than optimal nutritional quality as a means to provide their fawns with adequate cover from predators. For example, while freshly burned areas typically produce higher quality deer forage, they initially reduce the amount of suitable cover needed to protect fawns against predators like coyotes, which hunt best in areas with open understories having the least amount of vegetation as possible. Conversely, does would tend to select areas that had been treated with fire less recently, preferring areas where the understory had more time to become dense with available cover for their fawns to hide. These processes are of great importance to wildlife managers, as they provide information which serves as the basis for habitat management plans.

Over the course of the project, VADS was able to successfully capture a total of 85 unique, adult deer, consisting of 62 females and 23 males. In terms of total deer captured by site, Hidden Valley was by far the most productive study area (n = 47), followed by Gathright Wildlife Management Area (n = 27) and Warm Springs Mountain Nature Preserve (n = 11). Of the 62 does, 40 were confirmed pregnant and outfitted with tracking collars and VITs. From those VIT-implanted does, the team was able to successfully capture a total of 21 and 11 fawns during 2019 and 2020, respectively.

Known birthdates of these fawns spanned from June 6 to July 11, with the peak fawning date (median of observed birth dates) occurring on June 16 in both 2019 and 2020. In an effort to bolster sample size, foot searches were carried out to locate fawns at various areas throughout study grids. Thus, the VADS successfully added an additional 14 and 11 opportunistic-caught fawns to the sample in 2019 and 2020, respectively. This brought the two-year total up to 57 unique fawns collared, consisting of 32 VIT-caught and 25 opportunistic-caught fawns, respectively.

Combining data across years, the team observed a 12-week fawn survival rate of approximately 40 percent (0.402; 0.288 – 0.562), with the sharpest declines occurring within the first 20 days of life. A total of 30 fawn mortality events were observed, with 70 percent attributed to predation. The remaining 30 percent were attributed to natural causes (e.g., abandonment or malnutrition). Upon initial investigation based on site kill characteristics alone, field staff attributed most fawn predation events to black bears (n = 16), with bobcats (n = 3) and coyotes (n = 1) being secondary contributors. 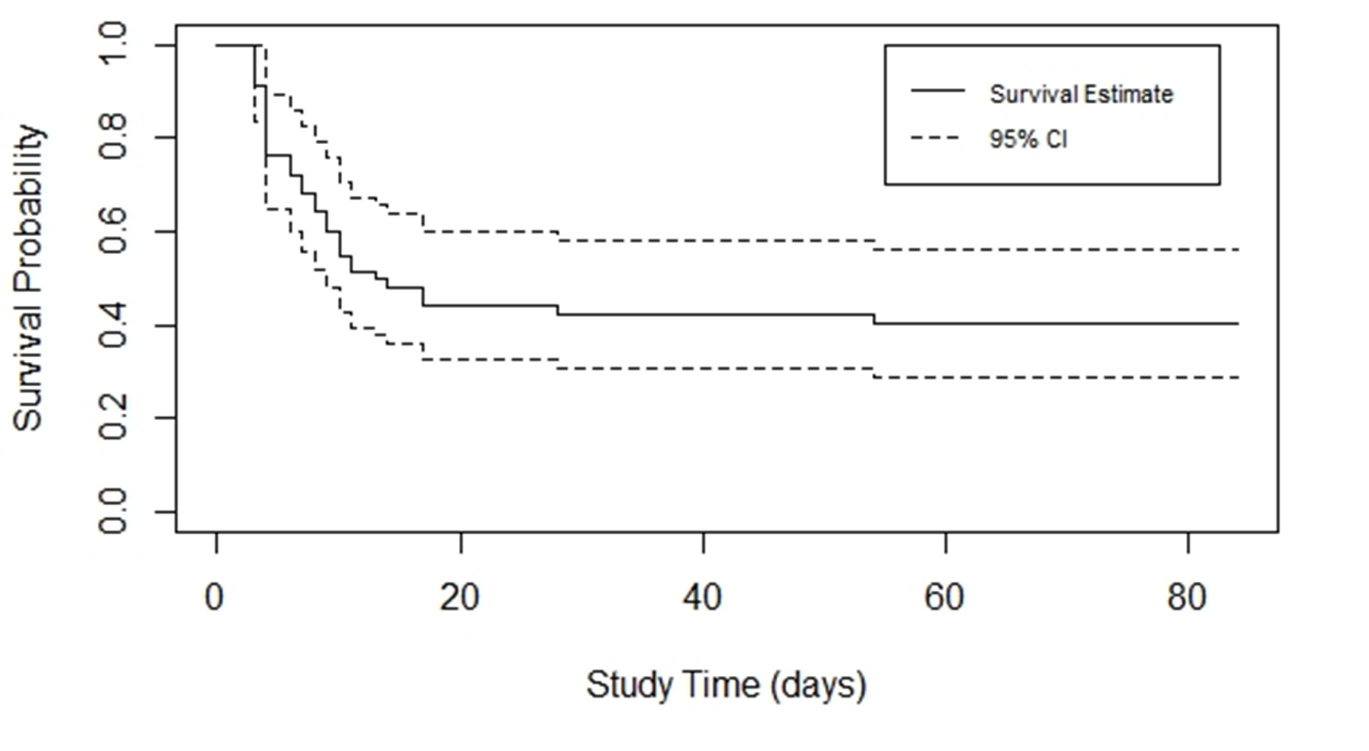 Fawn survival to 12 weeks of age across the two-year study was 40% (y-axis), with the sharpest decline occurring within the first 20 days of life (x-axis).

Results from genetics analysis is still forthcoming to provide supplemental evidence about which predators were responsible for mortality events. To determine which habitat characteristics potentially affected fawn survival rate, the team measured “distance-to-habitat” values from capture locations of fawns. These metrics included distance to water, herbaceous fields, oak-dominated forests, pine-dominant forests, early-to-mid successional level (i.e., those areas treated by fire or timber harvest), elevation profile, urban development, and others. Of all these habitat factors, only elevation was significant in predicting fawn survival; with mortality risk increasing with increasing elevation.

Bath County, located within the Ridge and Valley physiographic region of the state, is primarily characterized by long, narrow ridgetops that lie adjacent to broad, fertile valleys. These initial findings suggest that many of the issues surrounding fawn survival are attributed to changes in habitat quality, as elevation increases from low to high. These conclusions make sense when considering the near-universal characteristic of deer habitat within the southern Appalachian Mountains: the higher up you go, the poorer the soil. Soil quality is an essential consideration for deer managers who are trying to determine the best ways to address specific populations, as more fertile soils will inherently produce larger quantities and higher qualities of available forage needed for does to successfully raise their fawns. 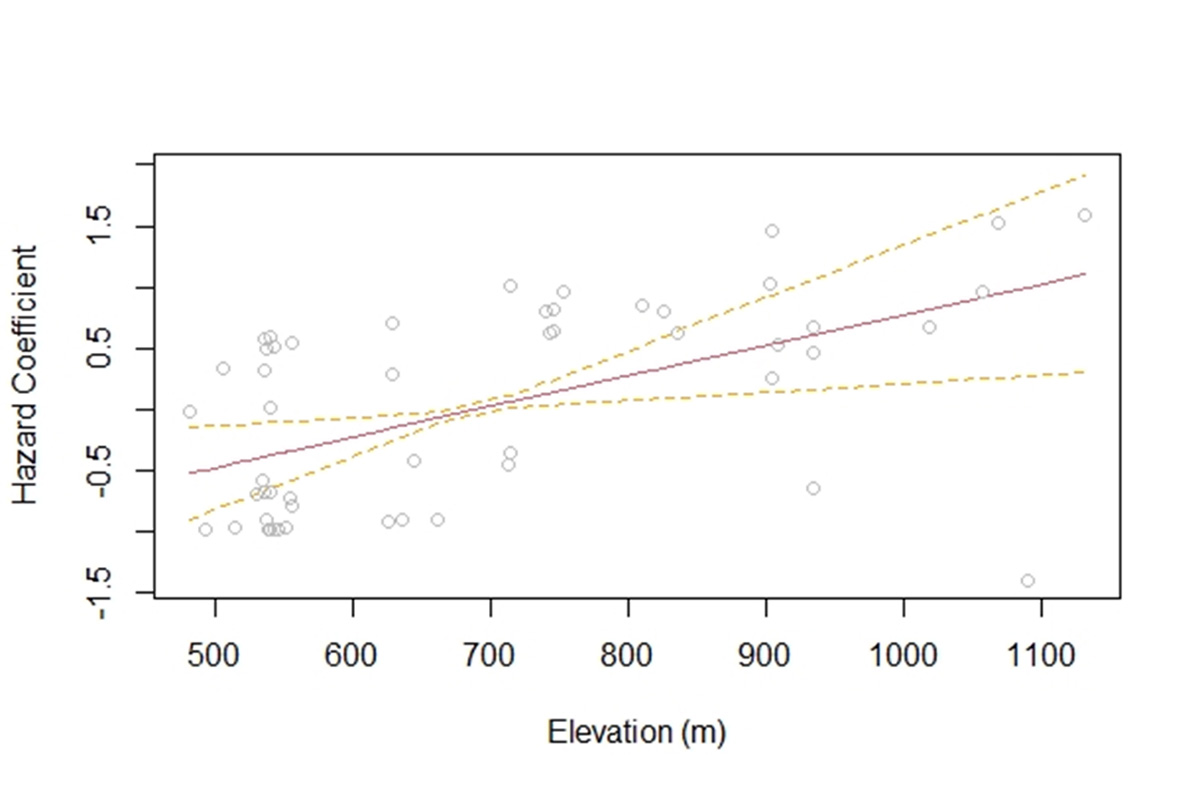 Although altering the soil composition across large portions of public land is essentially impossible, habitat management can still be beneficial. Within these high-elevation areas, prescribed fire and timber harvest are invaluable tools utilized by managers to create favorable habitats for deer and research has shown that disturbance created from these practices opens the canopy and allows for light to penetrate to the forest floor, thereby providing deer with thick, herbaceous, understory cover needed for fawns to evade predators. Additionally, the practice of prescribed fire allows for critical nutrients to be recycled back into the soil beneath.

However, with growing human populations and considerations of various stakeholder groups that need to be addressed, it’s difficult to imagine that the effects of these processes will be restored to the scales that were once utilized by Native Americans and early settlers within the Appalachians. Nevertheless, while the current total area manipulated with prescribed fire is relatively small in relation to the amount of land which is available to be burned, the amount of treated acreage within national forests west of the Blue Ridge continues to increase year after year. That said, timber management has drastically declined since the mid-1980s and areas could still benefit from sustainable harvest practices.

While it is true that black bear populations have increased across Appalachia during recent decades—likely contributing to fawn predation rates observed within the VADS—decreasing habitat quality is probably still the most important factor in declining deer populations within the region. Black bears, unlike coyotes and bobcats, are omnivorous (meaning they eat both meat and plants) and studies have found that the diets of certain populations of black bears can be predominately plant-based. However, black bears are also opportunistic predators that tend to take advantage of any food resource available to them. Therefore, it makes sense that fawns may be utilized more frequently by black bears as a food resource in high-elevation forests which are lacking in available cover and adequate forage needed to survive as opposed to low-elevation valley fields which are more plentiful in both respects.

These findings are important to consider before management actions are set in place: while black bear predation of fawns may have the potential to hinder deer population growth in some instances, it is still important to consider the implications of increased habitat management and its potential to reverse these issues. With more results forthcoming, the VADS hopes to provide more insights to these initial conclusions in the future.

Garrett Clevinger is a Virginia Tech Student work on his doctoral degrees. Garrett was one of seven students to receive the 2021 VDHA Scholarship Grants. Readers can reach Garrett at garrbc1@vt.edu with questions and comments.